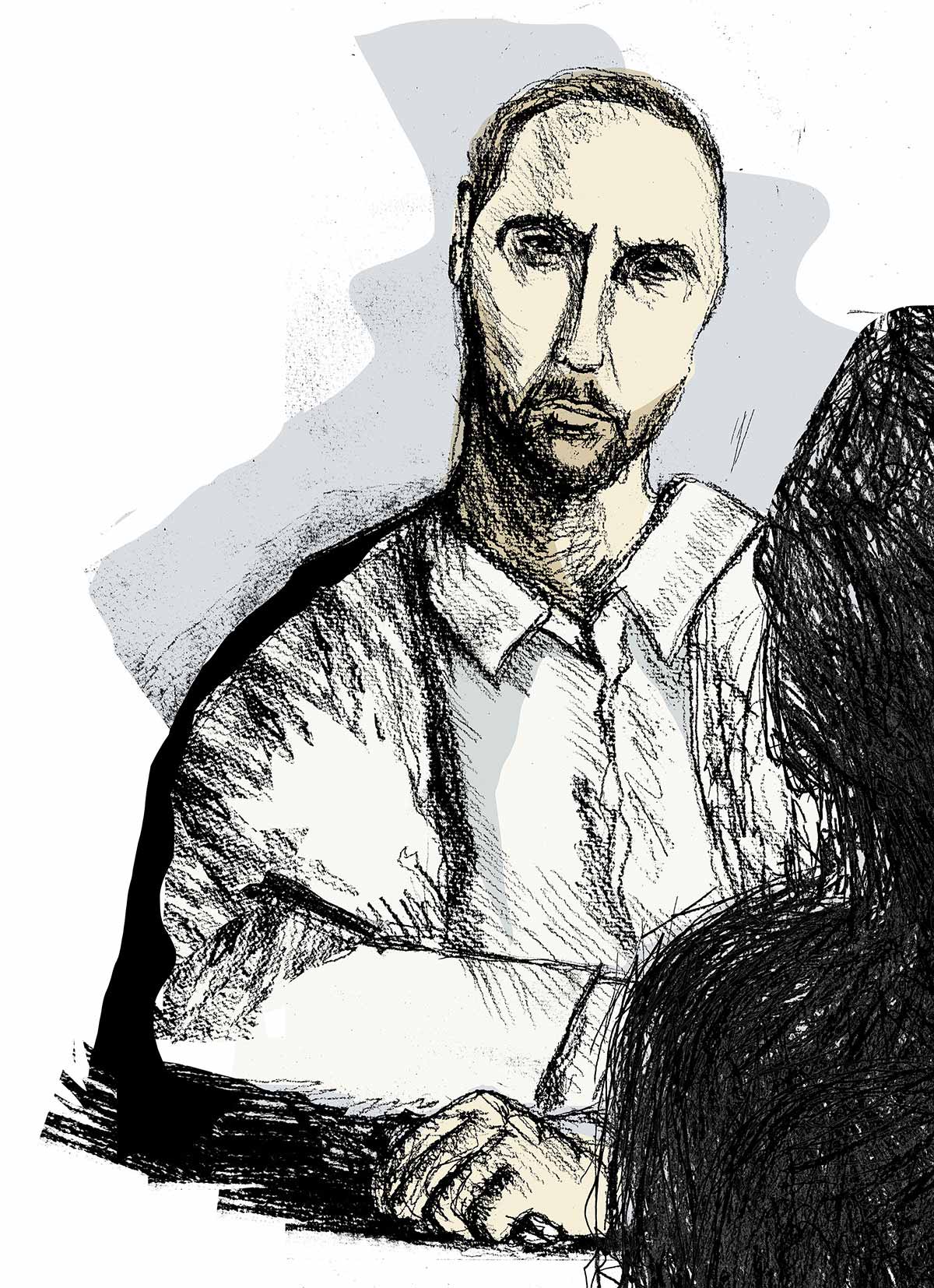 Michael Lockhart sat across from Detective Joe Murray at a cramped desk on the second floor of Southwest Detectives' headquarters at 55th and Pine. They were so close, their knees practically touched.

There was something inevitable about this moment, this pairing — the cop and the con man who had both spent their lives trying to fill the shadows that were cast by their fathers. Had they grown up with different role models, it's easy to imagine their paths would have never crossed.

Murray didn't know what Lockhart would say, if anything, about the morning of Aug. 18 on Angora Terrace, when 31-year-old Lawrence Downs was shot 14 times.

But Murray had leverage. He had tracked down surveillance footage of Lockhart and three others fleeing the scene. Using the mug shot database, he'd painstakingly identified one getaway driver solely from a tattoo on his forearm. And Downs, recovering in his hospital bed where he lay paralyzed, had told him Lockhart had been one of the shooters who tried to kill him. 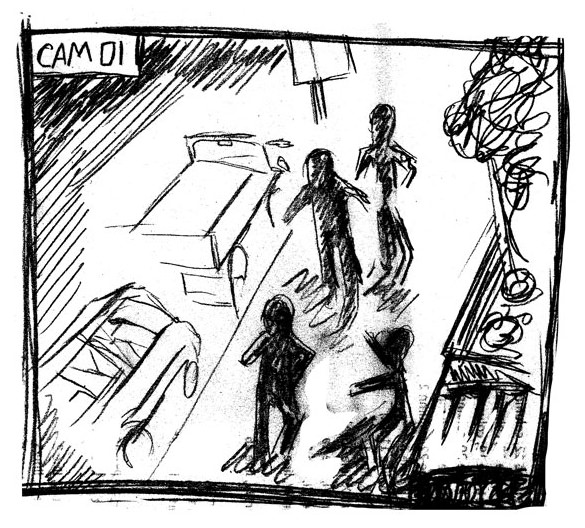 Still, the interrogation could be tricky. Lockhart wasn't just the son of a murdered drug dealer; he had a politician's knack for schmoozing, and was cunning enough to pull off living parallel lives, volunteering with the anti-violence nonprofit Philadelphia CeaseFire and selling guns to the ATF, all the while creating mayhem with a West Philly drug gang.

However Lockhart was going to play it, Murray knew pounding the desk and demanding answers weren't going to get him anywhere.

Lockhart mentioned that he did a lot of volunteer work for CeaseFire, and casually dropped the names of politicians and law enforcement types he'd met through the nonprofit.

Murray thought Lockhart was trying to convince him they were both on the same team, a couple of guys who were each doing their part to address Philly's gun-violence epidemic.

He kept the tone light for the first couple of hours. Then he offered Lockhart a break and a free meal. After Lockhart dined on chicken fingers, fries and a Coke, they started talking again.

It was about 2:30 a.m. on Sept. 12 when Murray started putting Lockhart's words down on paper.

There was something inevitable about this moment, this pairing - the cop and the con man who had both spent their lives trying to fill the shadows that were cast by their fathers.

"Michael," he said, "please tell me what you know about the events leading up to the shooting that occurred on August 18, 2015."

Jerry "Boog" Brooks, the head of a small West Philly drug gang, had asked one of his friends, Kerry Foster, to hide three of his guns for a few days, Lockhart told the detective.

The guns inexplicably vanished from Foster's house on Aug. 11. Lockhart had been there that night, hanging out for a few hours while Foster inked a tattoo on his ribs.

He carefully steered Murray toward his accomplices while minimizing his role.

Another friend had actually taken the guns, Lockhart insisted. He gave the name of someone who, conveniently, was behind bars on an unrelated murder charge.

A neighbor claimed he saw Downs and two other men, Hassan Williams, and Kashif Love, near Foster's house the day after the weapons disappeared, Lockhart explained to the detective. Brooks called for all three to be murdered, he said. 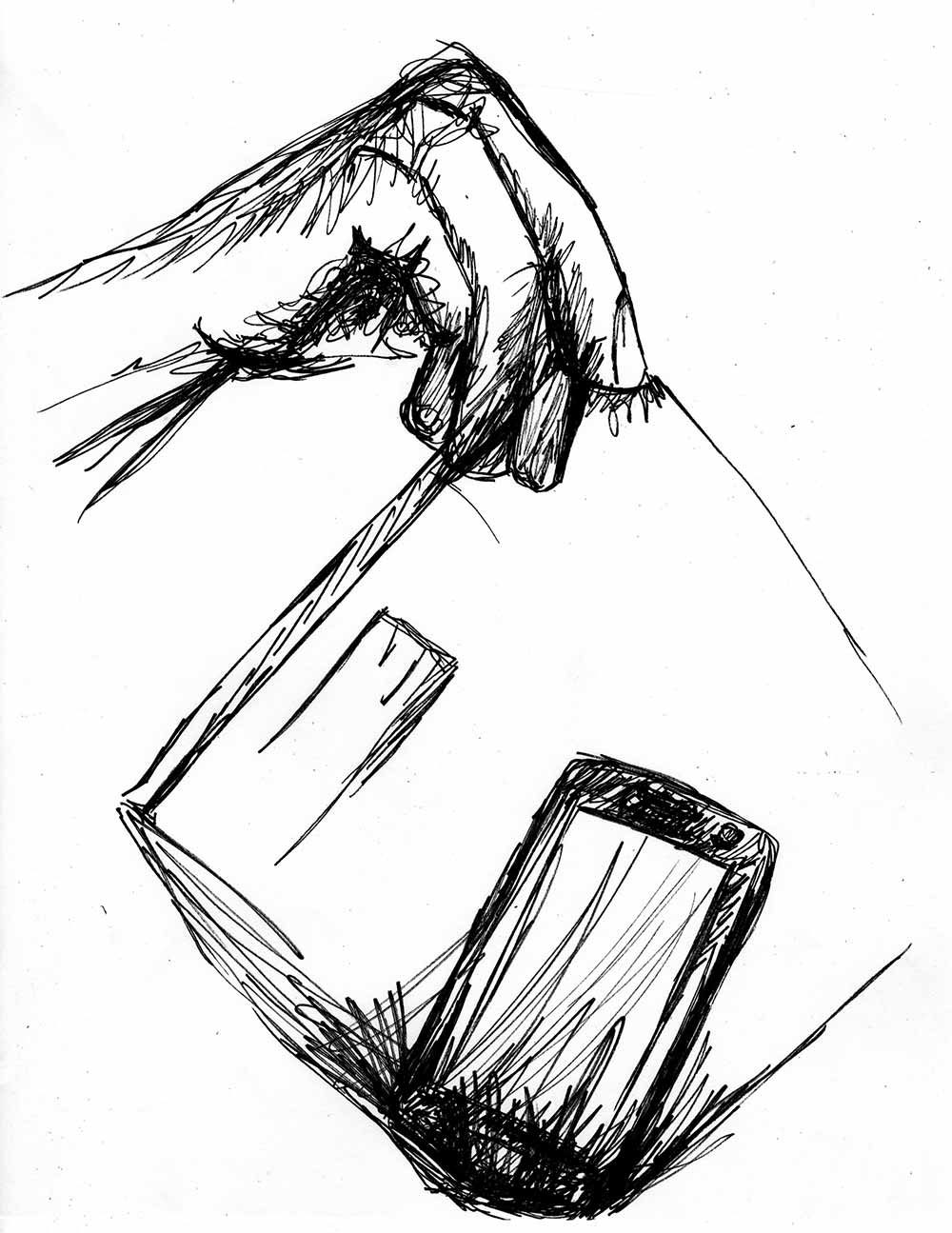 Can I see your phone? Murray asked at one point.

He had already gotten a search warrant for the phone but didn't want to reveal it until he saw how Lockhart decided to play things.

Lockhart handed it over, and Murray opened the "Notes" app. There it was, at the top of the screen: Lawrence Downs' address. The time stamp revealed it had been entered Aug. 17, the day before Downs was gunned down on his bike.

"Why did you put that in?" Murray asked.

Lockhart didn't have a good answer. He had to scramble.

He admitted he was down the block when Downs was shot on Angora Terrace. But he claimed he wasn't one of the shooters.

"I heard the first shot and then a bunch more," Lockhart said. "I covered my ears and when the shooting stopped I saw them walking off." 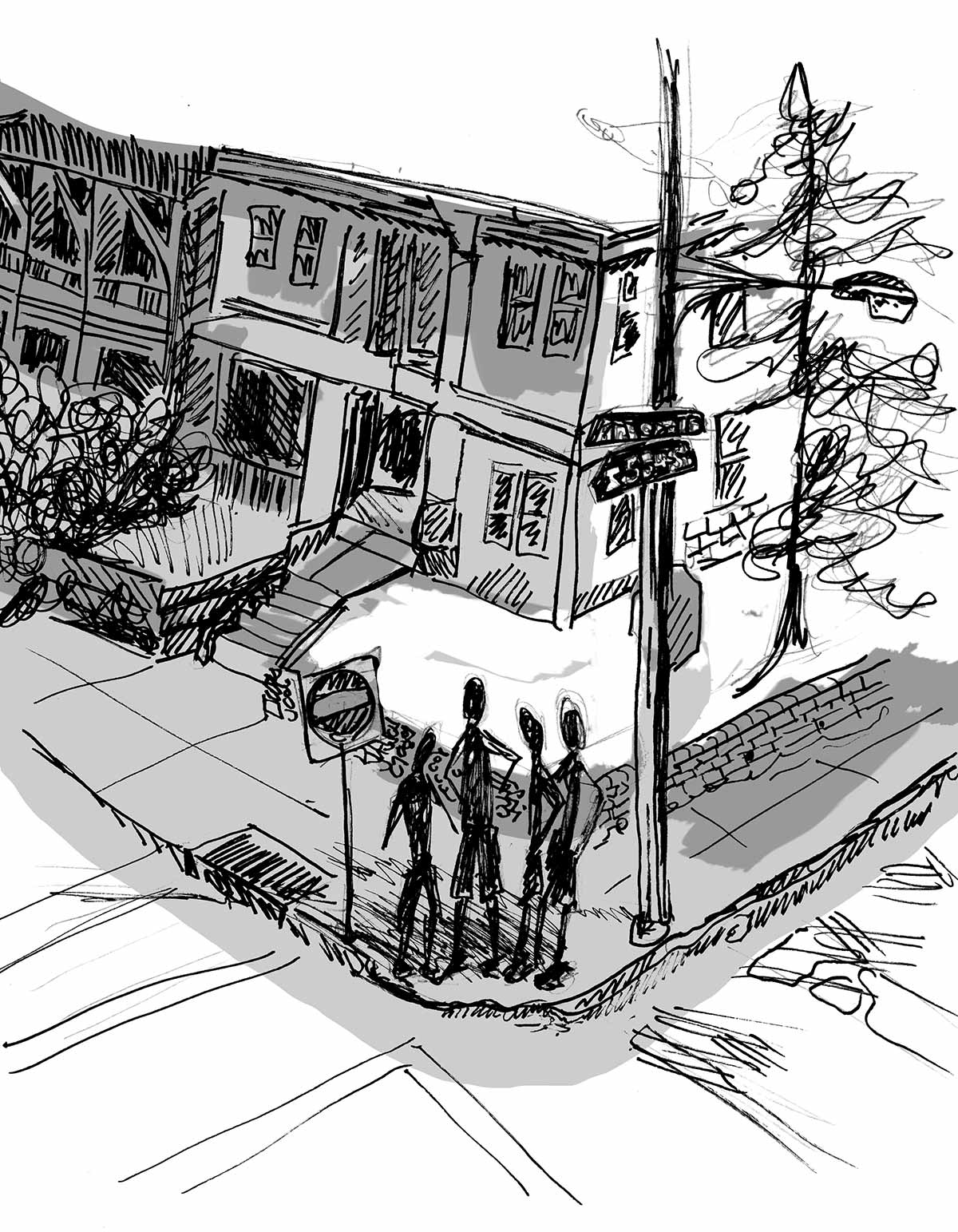 At this point, Murray felt he had as much as he was going to get tonight. He had Lockhart shipped off to the city detention center in the Northeast. He was charged with attempted murder, aggravated assault, conspiracy, and a host of other charges. Bail was set at $2.5 million.

Assistant District Attorney Cydney Pope was tasked with prosecuting the case. She was 34, and her steely blue eyes narrowed with intensity whenever she discussed the cold-blooded ambush of Lawrence Downs. She'd promised Downs and his family that his attackers would not get away scot-free.

But she and Murray had worked on numerous investigations in the past, and both knew that well-built cases could crumble on their way to conviction as witnesses recanted and stories changed. They needed more evidence to buttress an eventual prosecution. Their solution: Spend nights and weekends on their own time poring over a couple of years of information pulled from Lockhart's cellphone. Printed out, it filled 4,000 pages.

Text messages gave Murray and Pope a glimpse into Lockhart's ability to operate in different worlds at the same time. In one instance, he texted a friend about wanting to get his hands on more guns — all while he was waiting at Philadelphia International Airport to catch a flight to Illinois, where he and his CeaseFire cohorts were scheduled to share their gospel of hard truths with some prison inmates.

Hooked on our narrative journalism? Subscribe now to support our work and get more well-crafted stories like this. Get unlimited digital access for just $0.99 for the first four weeks.

Deep in his Lockhart research, Murray found himself pulled away and detailed to the papal security beat for several days as Philadelphia was bracing for a late-September visit from Pope Francis. He amused himself with sarcastic tweets while he tasked with keeping tabs on some Center City businesses. "Secret Service agents LOVE sunglasses," he wrote. "I mean looooooooove."

He and Cydney Pope soon turned up evidence of more criminal behavior, such as an armed home invasion in June 2015. Lockhart and two other men allegedly barged into the home of an 82-year-old woman in West Philly and ran through the house, looking for valuables to steal. Lockhart was armed with a gun, but still flashed some of his charm.

Text messages gave Murray and Pope a glimpse into Lockhart's ability to operate in different worlds at the same time.

"He was very polite," the elderly woman would later say. "He asked me if I wanted a glass of water."

The trio darted out of the house empty-handed, only to hear the shriek of police sirens growing closer. Lockhart had an idea. He texted a fellow volunteer at CeaseFire, and asked him to call 911. Tell the dispatcher you see someone with a gun in the area, Lockhart told him.

He hoped the bad information would distract the patrol cops closing in on his location.

Lockhart made it out of the neighborhood without being caught, but not because of any clever scheme. The 911 operator immediately realized that Lockhart's pal was calling from North Philly to offer eyewitness information about an unfolding crime in West Philly.

Continuing to scour through the phone records, Murray and Pope unearthed a key find: a photo of Lockhart clutching Jerry Brooks' guns.

It had been taken more than a month after the guns vanished.

Michael Lockhart's luck may have finally run out. 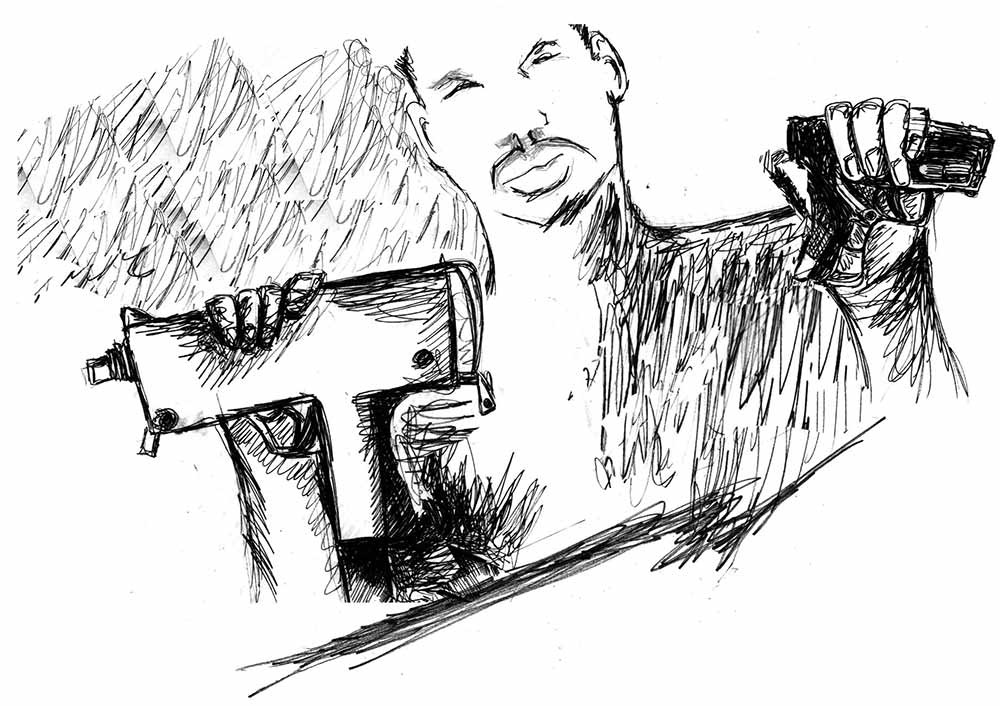 Coming tomorrow: At a long-awaited trial, a prosecutor believes she has enough evidence to convict Michael Lockhart but then he springs one last surprise.