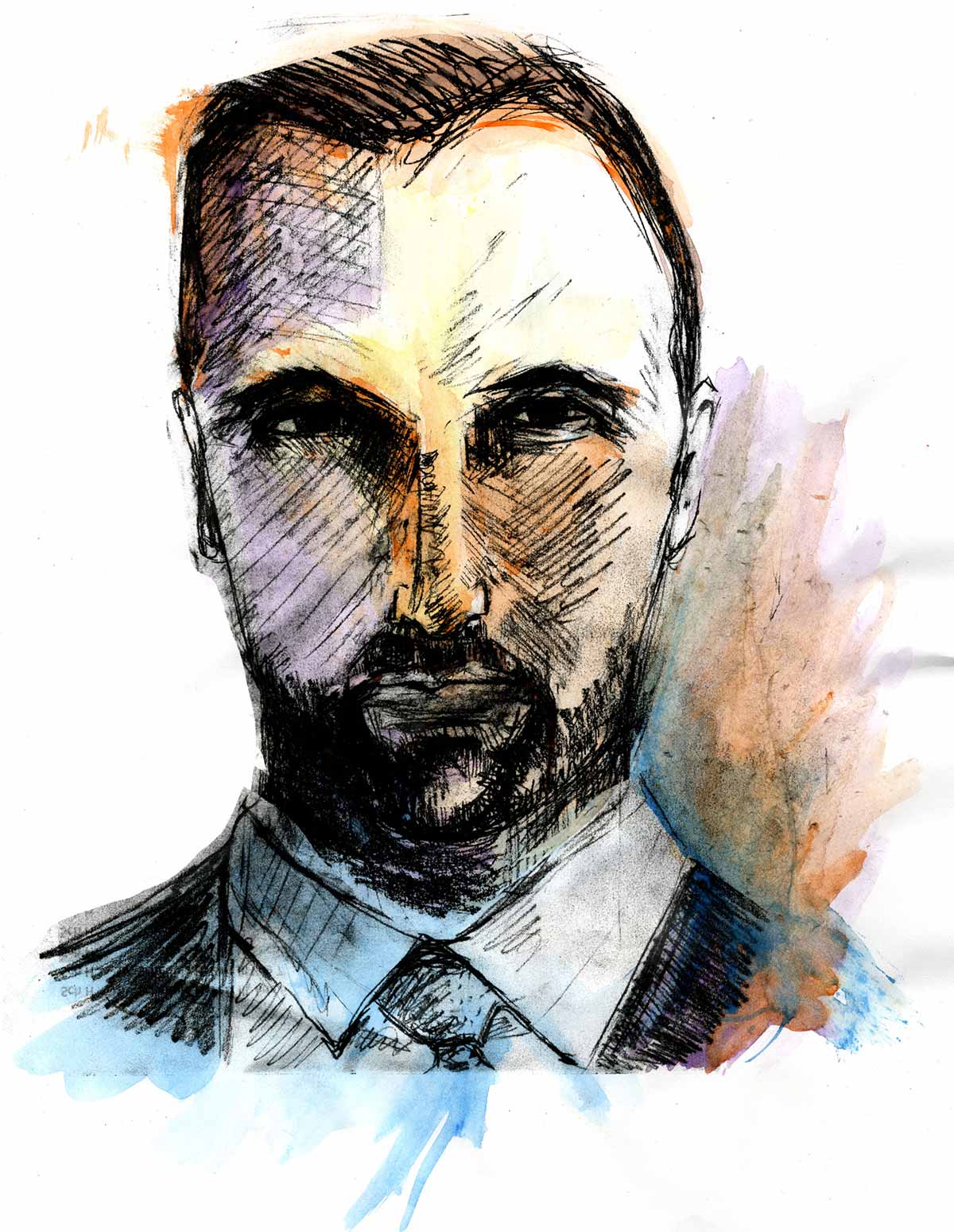 on an 80-degree morning earlier this fall, Assistant District Attorney Cydney Pope and Detective Joe Murray made their way to Courtroom 304, a stuffy, windowless box with gray walls inside the Justice Juanita Kidd Stout Center for Criminal Justice.

Jury selection was scheduled to begin on the first day of Michael Lockhart's trial for attempted murder. Murray figured he wouldn't need to take the stand to testify for another day or two, so he wore a dark zip-up jacket instead of his usual tailored suit. Pope was in a dark-blue blouse and skirt.

In the two years since Lockhart was arrested, a lot happened — and a lot didn't happen.

The disappearance of those weapons set in motion a wave of senseless violence.

Murray's uncle Dennis, the former Homicide Unit sergeant, had died in August the year before after a long, brutal battle with cancer. Dennis and his wife, Mary Anne, were Joe's godparents, and close to their nephew. Mary Anne knew Joe longed to be in Homicide, but she worried about the unforgiving nature of the job. Uncle Dennis, meanwhile, would needle him: Joe, when are you going to Homicide?

As for Pope, no matter how many text message threads she and Murray reviewed or statements they took, she couldn't figure out what became of the three guns that had been stolen in 2015 from Jerry "Boog" Brooks, the head of a small West Philly drug gang. The disappearance of those weapons set in motion a wave of violence.

What Lockhart did with them was anybody's guess; he never offered any answers. ATF officials said they didn't have the guns.

The bigger question, though, was why Lockhart had taken the guns in the first place, and then helped to frame three innocent men: Lawrence Downs, Hassan Williams, and Kashif Love.

That answer seemed to be tied up in the grand riddle of Michael Lockhart himself, the boy who grew up wanting to build a different legacy than his father, yet felt compelled to follow the same dangerous path; the young man who spent his days preaching about the ills of gun violence in North Philly and his nights plotting murders in West Philly, all the while dancing with the Bureau of Alcohol, Tobacco, Firearms and Explosives. 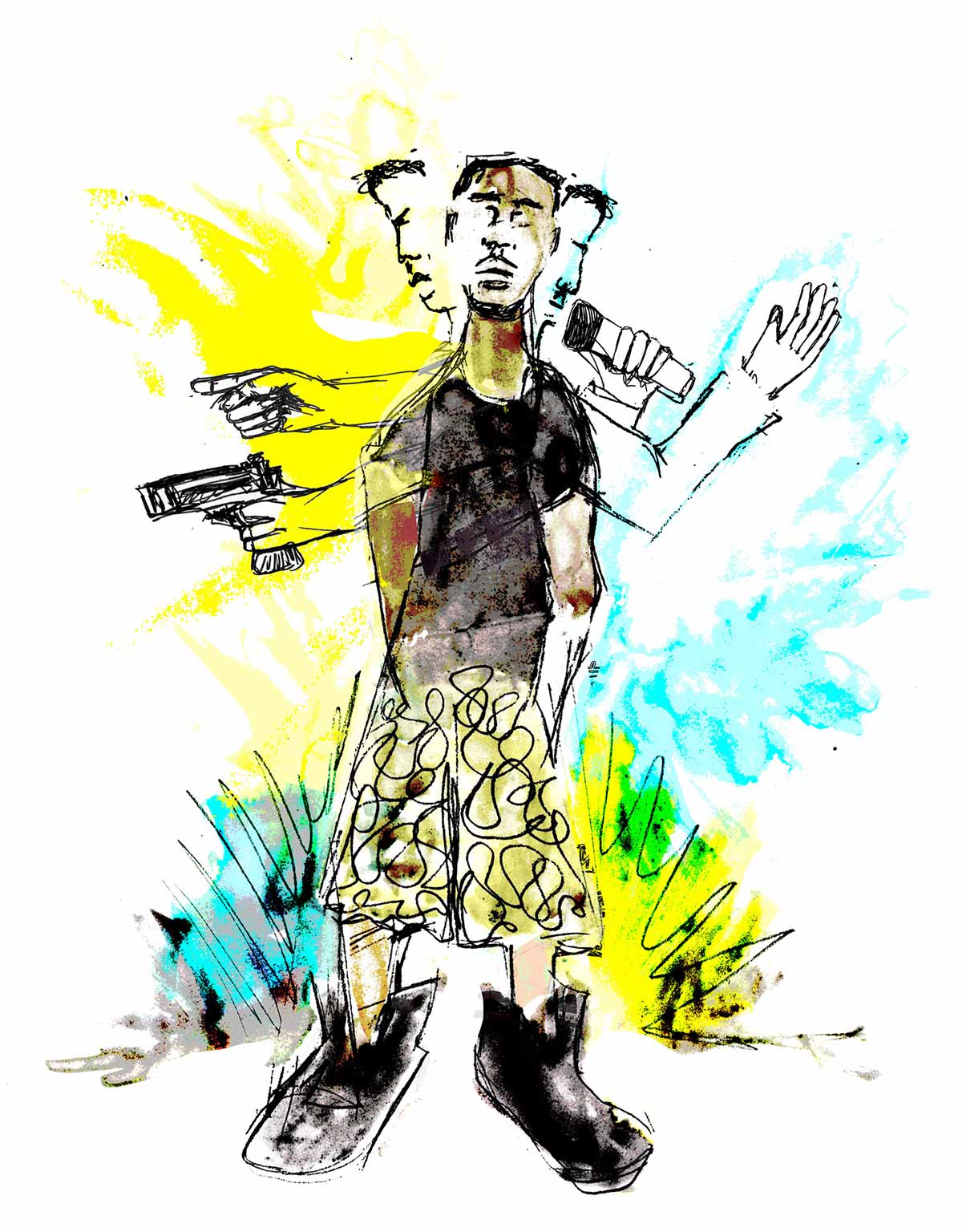 His trial, then, was shaping up to be the event that might sort out all of the different versions of Michael Lockhart, once and for all. It was also going to be the biggest test of his persuasive abilities. Could he convince 12 strangers that he had nothing to do with the attempted murder of Downs, who was left paralyzed after he was shot 14 times near his house on Angora Terrace?

Pope was eager to begin. She had amassed an overwhelming amount of evidence: surveillance footage from the day of the shooting, incriminating statements from Lockhart about the plot to kill Downs, and a sea of damning evidence from Lockhart's cellphone.

Little by little, the other players in this saga had been locked up — or were now dead.

Hassan Williams was gunned down just four days after Downs was ambushed. No one had been charged with his slaying, but investigators had evidence pointing toward some of the same people tangled up in the drama over the three stolen guns.

"He used everybody like pawns... I don’t think he should ever see the outside of a jail cell."

Kashif Love was alive — the only one of the three framed men to survive the ordeal unscathed.

Jerry Brooks was gone, shot to death in April 2016 over an unrelated neighborhood beef.

In the Downs case, Brooks' underlings — "JB" Booker, "Spazz" Smith-Davis, "Nu Nu" Brown, and Iskeia Ballard, caught on surveillance footage, and Kerry Foster — all entered guilty pleas to attempted murder and conspiracy. Some indicated a willingness to testify against Lockhart. The gang that he had once been so thrilled to be a part of was completely dismantled.

Downs, who spent most of his days stuck in a hospital bed in his mother's living room, was a potential witness. He was frustrated by the permanence of his disability, and heartsick over the murder of Williams, a close friend.

"He used everybody like pawns," Downs was ready to say if called to the stand.

"My life changed drastically. I can barely get out of this house. I can't be with my kids the way I want. I don't think he should ever see the outside of a jail cell."

A door on the left side of the courtroom swung open, and Lockhart was led to the defense table, where his lawyer, Edward Meehan, waited.

Lockhart wore a dark shirt and dark pants. His hair was cropped short, and he'd grown a beard that dangled below his chin. A handful of his relatives sat together toward the back of the courtroom.

Then Lockhart sprang one last surprise.

Maybe the specter of having to watch his former cohorts testify against him was too much. Maybe he didn't want to put his family through the draining ordeal of a trial. Maybe he was just tired. Or maybe his lawyer's advice finally made sense. 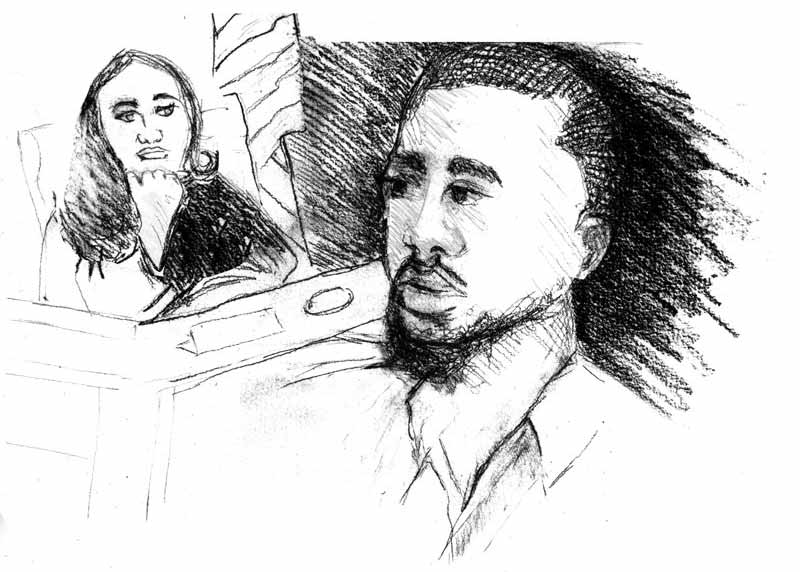 With no promise of a better outcome at trial, he had an eleventh-hour change of heart. Like all of the rest of the now former members of Brooks' crew, he was going to plead guilty to attempted murder, aggravated assault, conspiracy, and four other charges.

"Are you pleading guilty because you are in fact guilty?" Judge Mia Roberts-Perez asked.

"Yes ma'am," he said, in a flat, emotionless voice.

The room fell silent. After so much bloodshed and betrayal, Michael Lockhart didn't have any more stories to tell. He was 21 now, and the once-intriguing question of whether he would follow in his father's footsteps — whether he, too, would be claimed by what his grandmother had once said was a family curse —  was settled.

Murray stood on the side of the courtroom, watching the scene unfold, his face blank. 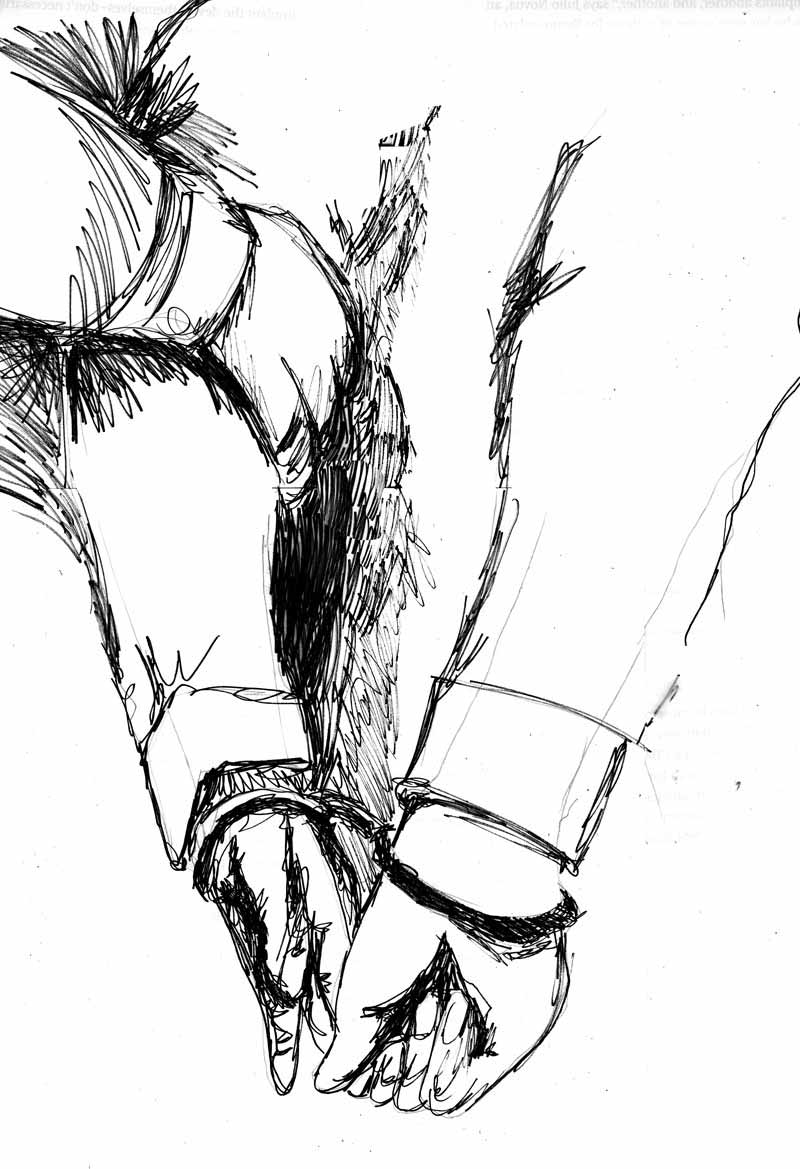 Sentencing was set for January, when the judge would also consider Lockhart's armed home-invasion case from June 2015.

Lockhart was led out of the courtroom by a sheriff's deputy. He didn't say another word or express any remorse. Out in the hallway, his mother, Yolanda, didn't want to talk about what had just happened.

Later, he called a reporter from a prison phone and tried to explain the choices he made at the beginning of this deadly saga. "I really didn't have time to think," Lockhart said. "You dig a hole, but you can't see how deep it is at the time. I didn't understand the weight of everything I was carrying."

Unprompted, he talked about one of the happiest days in his life, a family baby shower a few years ago that brought all his relatives together. Lockhart knew he appeared to be content and free of the streets that day. But after the shower ended, he went home, changed his clothes, grabbed a gun, and went out with his friends to hunt down a man he believed was gunning for him. Lockhart didn't find him that night.

He struggled to explain why the devil on his shoulder often won out. "Every time something good happened, it pushed me back to [the streets]," he said. "I had to be somebody that I couldn't."

As for the murder of his friend Hassan Williams, Lockhart said he had nothing to do with it. "I wasn't in West Philly when it happened. I was all the way out of the loop with a female. I found about it from his dad. He called me from the hospital."

For Murray, he knew he'd probably prevented more violence by getting Lockhart off the streets. "He's the kind of guy you don't want to admit exists," he said. "You want to believe criminals are just acting on impulse. You don't want them to be diabolical like this."

Murray had lived up to the family name once again by outsmarting a dangerous man, and that act alone now felt more poignant than ever.

It was only months earlier that Joe finally got the news he had long waited for: He was being transferred to Homicide. The family phone lines lit up with the good news and Joe soon was in touch with his aunt. It was Feb. 16, Uncle Dennis'  birthday.

Like her nephew, Mary Anne Murray was thrilled, especially knowing Joe would be joining Homicide wearing her husband's old badge number, 945. Just talking about it made her emotional.

Her husband used to say that Homicide was the one assignment where he truly felt that he made a difference in the city. But she knew there was a darkness to the job. She worried Joe might lose a piece of himself so she felt compelled to offer advice.

"Don't let the ugliness take you over," she told him. 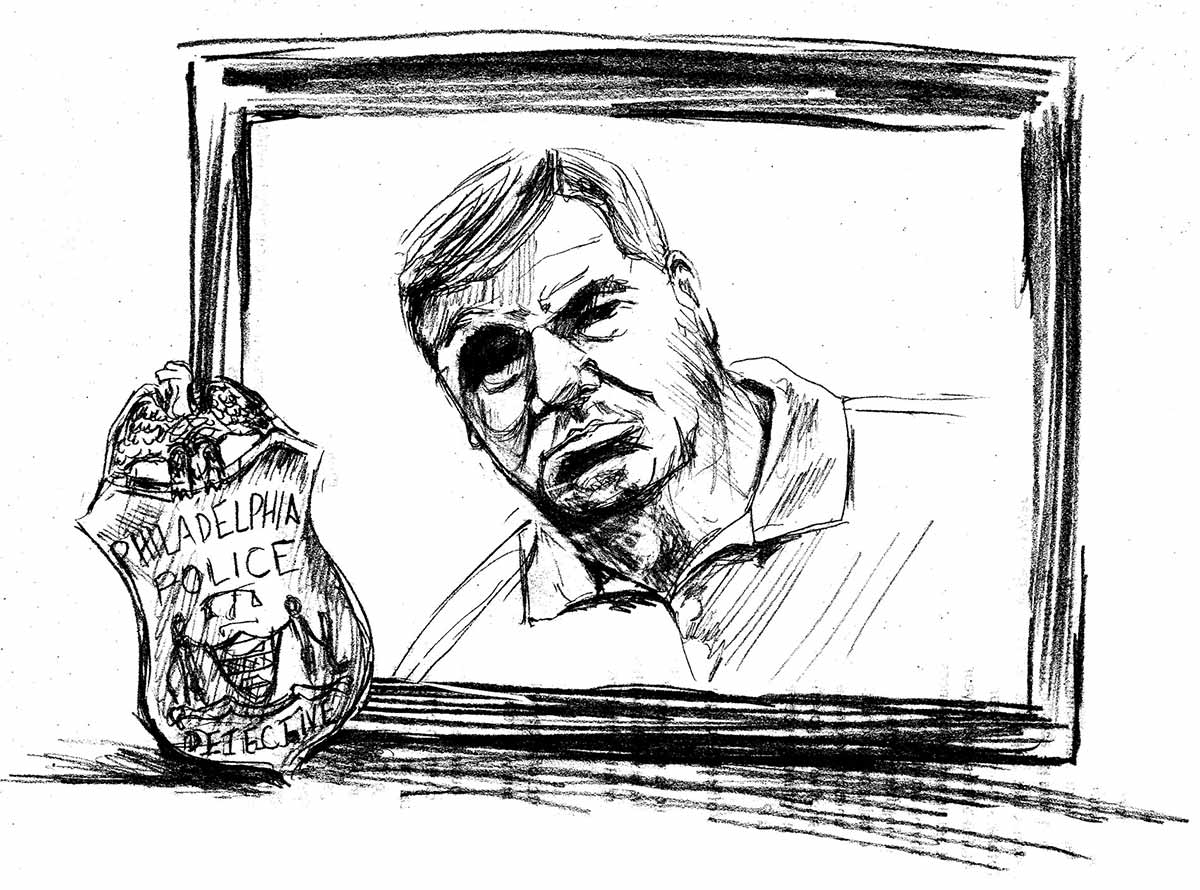