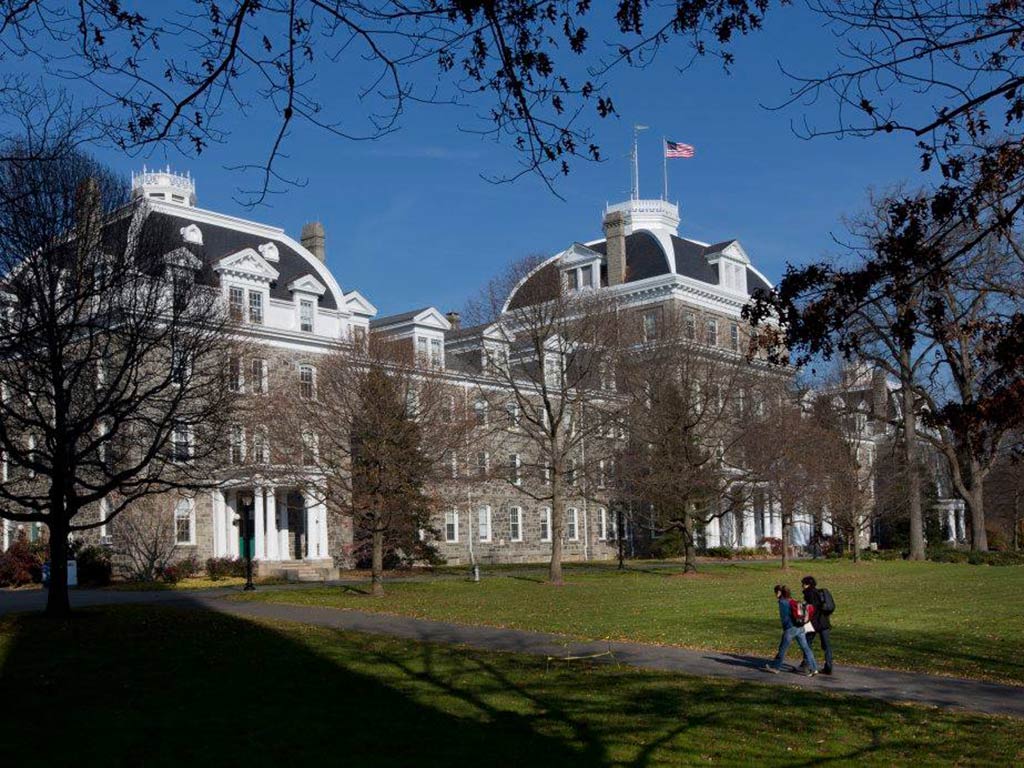 Not at the front of the classroom

How diverse do you think colleges are?

In Pennsylvania, about three-quarters of students are white.

Undergraduate enrollement by ethnicity in PA

Drag the dotted handles on the bar below to guess the breakdown of Pennsylvania's college faculty.

Hint: if a section will not grow or shrink, try changing the size of one next to it.

More than 83 percent of Pennsylvania professors are white, meaning they are overrepresented compared to the students they teach.

Fifty-seven percent of students in New Jersey are white.

Drag the dotted handles on the bar below to guess the breakdown of New Jersey's college faculty.

Hint: if a section will not grow or shrink, try changing the size of one next to it.

Scroll down to continue to story

College enrollment is growing more diverse, but once on campus, minority students often have to look hard to find professors who look like them.

Nationally, about 79 percent of full-time college professors are white, teaching an undergraduate population that is about 62 percent white.. 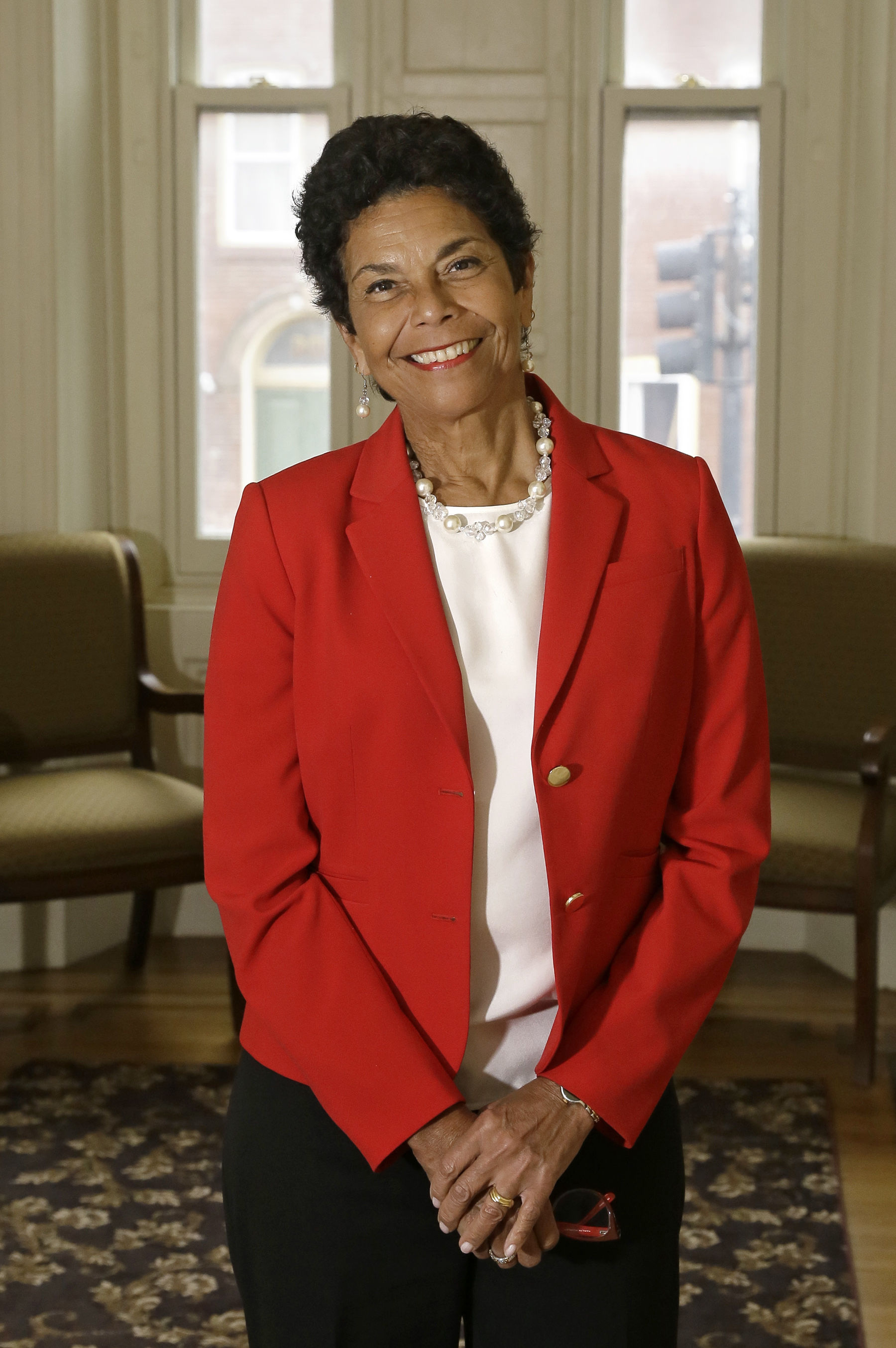 Elizabeth Robertson / staff
“If there's nobody there who looks like you, the possibility is that that's because you won't succeed. You don't belong," says Phoebe A. Haddon, the chancellor of Rutgers-Camden and the first black woman in that role.

The disparity can cause students to ask themselves: "Can I succeed here? Because by inference, if there's nobody there who looks like you, the possibility is that that's because you won't succeed. You don't belong," said Phoebe A. Haddon, the chancellor of Rutgers-Camden and the first black woman in that role.

At four-year colleges in Pennsylvania and New Jersey, about 70 percent of undergraduates with known races and ethnicities were white in the 2013-14 school year, the last year for which comprehensive data are available from the federal Department of Education; 81 percent of professors were white.

Compared with the prior decade, faculty did become more diverse, but not at a pace that kept up with changing student enrollment. The gap has actually grown.

When the people at the front of the classroom are as diverse as those in the seats, students of color see role models, and white students participate in the kind of multicultural world they will enter after graduation, officials said.

"What you want as a student is to be exposed to the broadest range not just of knowledge, but of ideas and perspectives so that you can equip yourself to be a watchful, thoughtful member of society," said JoAnne Epps, the provost of Temple University. "That comes from a diverse range of faculty."

Efforts to diversify faculty are hampered by low turnover; only a handful of tenured professors retire or leave a school each year. Hiring practices that depend on personal connections and traditional pipelines also can disadvantage minority candidates.

"Even an institution that was dedicated to the goal isn't going to be able to replace 20 or even 10 percent of its faculty," Epps said. "And they're not all going to be diverse - nor should they - so to make meaningful change takes time." 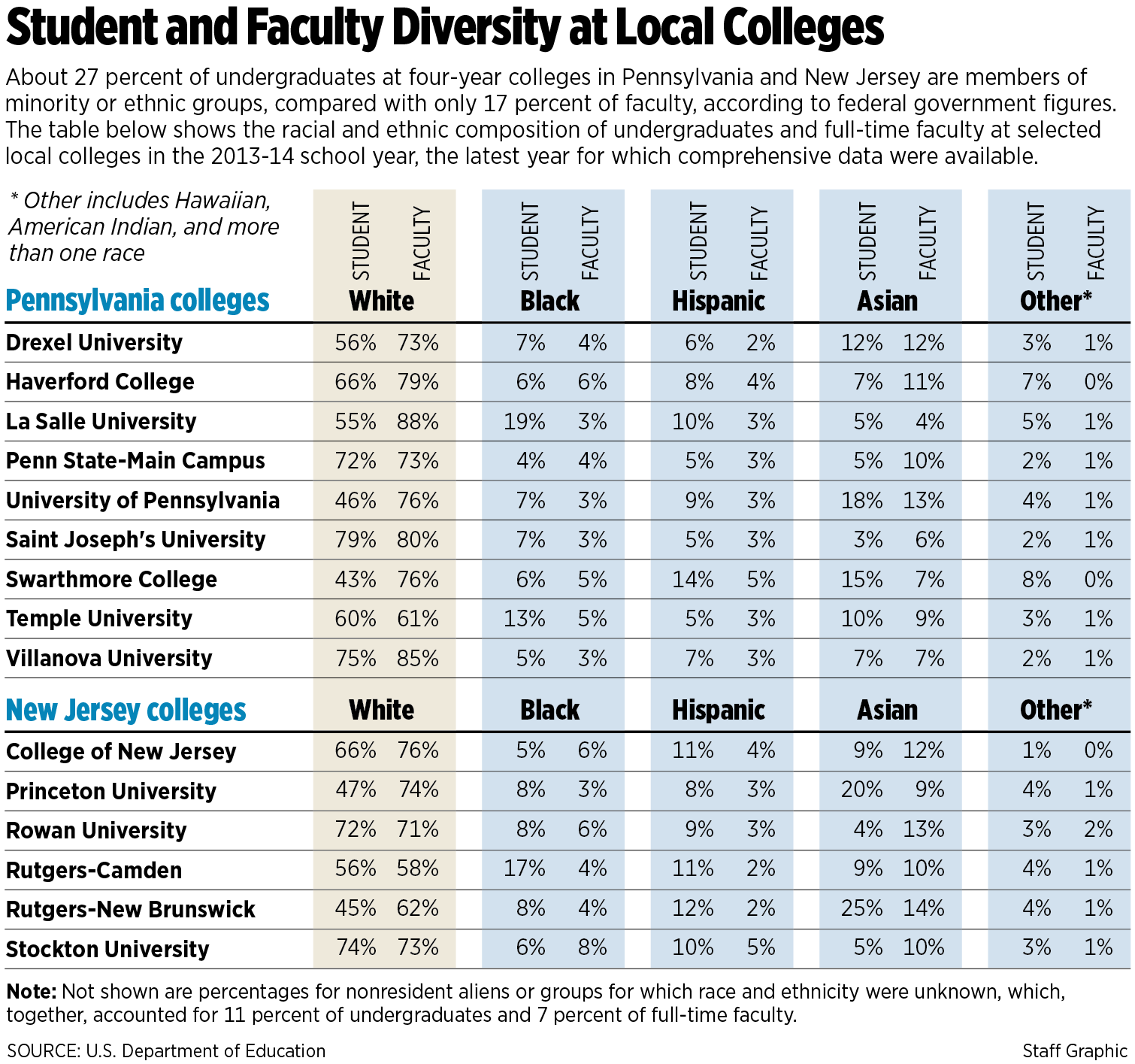 Progress comes in fits and starts, one hire at a time. One result is a cross-generational cycle that is difficult to break: Few students of color become professors, meaning the next generation of students continues to lack the role models, mentors, and visible professors of color.

"It's always better to have someone who can relate to you in a way that you could feel understood," said Cristian Vergara, 22, of Jersey City, who recalled initially feeling out of place at his hometown New Jersey City University.

Then a professor shared a story about being a first-generation student like Vergara. And Vergara began to notice professors who looked like him.

"Identifying myself as Hispanic and seeing a professor who has a doctorate and is Hispanic, it encouraged me to follow in his footsteps," said Vergara, who is now pursuing a master's degree in al psychology at NJCU.

Similarly, Ike Ejikeme, 22, of Jersey City, said he had thought about pursuing a doctorate in the past but had largely focused on law school. Then he transferred to Stockton University for its homeland-security master's program.

"I met so many prominent and well-spoken African American professors who have doctorate degrees, and to me that inspired me in my own journey," Ejikeme said.

Professors of color say they love knowing they have changed students' lives. But interviews with nearly two dozen professors, administrators, and faculty made clear that the responsibility is weighty: Mentoring and visibility take a tremendous amount of time and energy.

Christopher Fisher, a history professor at the College of New Jersey, has served on 16 search committees in his 17 years, taught dozens of classes, appeared in countless college photos, and spoken at numerous Black History Month events.

"You're constantly on the go. You become a spectacle, whether you want to or not," Fisher said.

The first years, when he also was in the African American studies department, were particularly hard, Fisher said.

"They didn't really have anyone to guide me, so I had to figure it out on my own while I was leading the department," he said.

All tenure-track professors feel pressure to say yes when asked to serve outside the classroom, said Tabbetha Dobbins, a Rowan University physics professor.

"Pre-tenure, you do feel pretty vulnerable saying no, and someone may get upset about it, and that person may have a direct bearing on your tenure decision," she said. 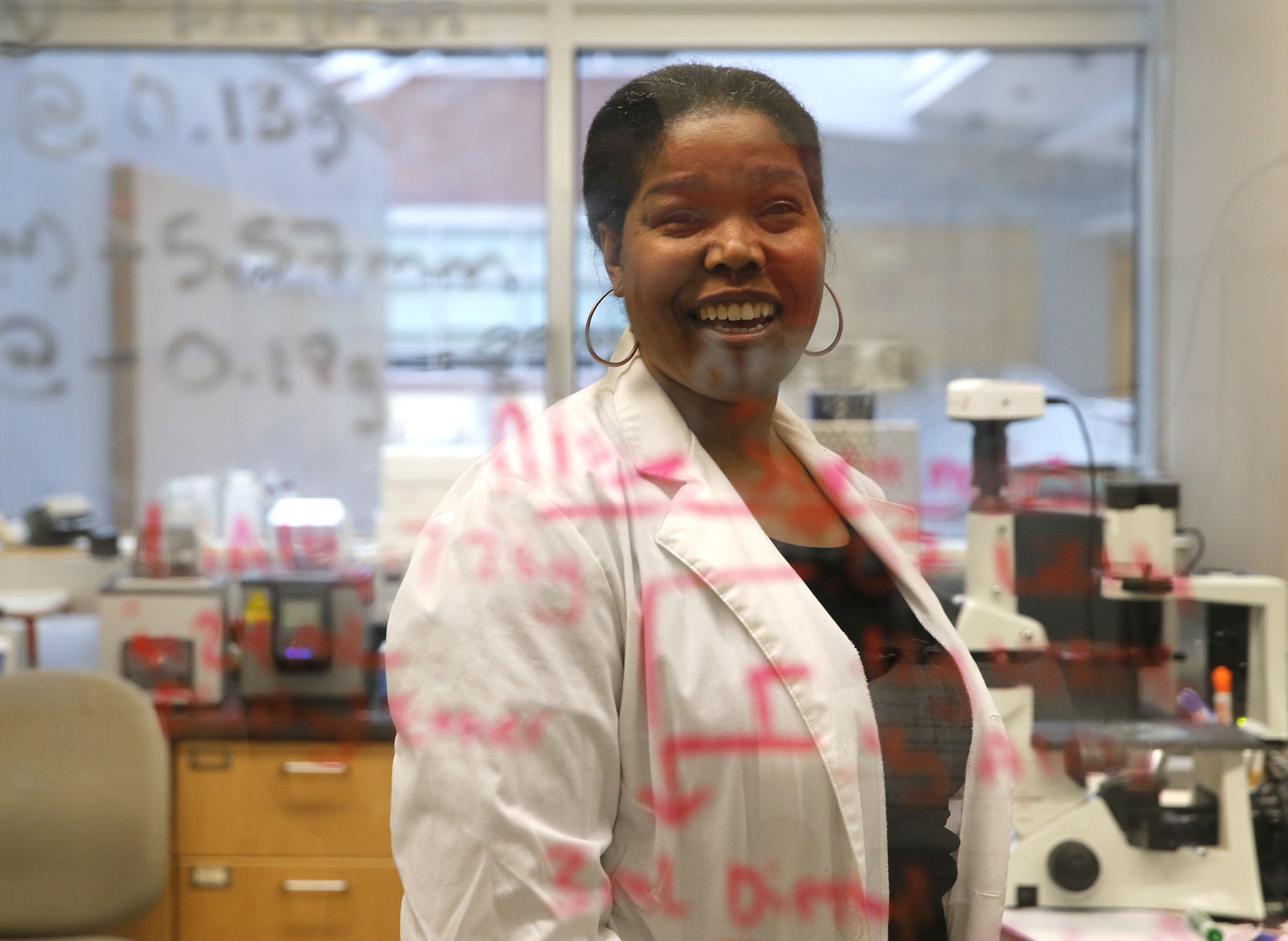 YONG KIM / Staff Photographer
"Pre-tenure, you do feel pretty vulnerable saying no, and someone may get upset about it, and that person may have a direct bearing on your tenure decision," says Tabbetha Dobbins, a Rowan University physics professor.

Professors of color get tapped over and over again as schools aim to diversify committees when hiring new faculty, revising curricula, and examining campus policies.

"You end up sacrificing research because it's not the thing that someone's breathing down your neck about on a daily basis," Dobbins said. "It can be a real frustrating experience."

Professors expressed complicated feelings about having to represent their racial or ethnic groups. Several said they feel the weight of obligation but also welcome the opportunity to bring missing voices to the table.

"I've had some of my colleagues tell me, 'You're doing too much, you have to slow down, you're going to get burned out,' " said Donnetrice C. Allison, a professor of communication and Africana studies at Stockton University. "But in a lot of ways I feel obligated. Because I'm like, if I don't do it, who's going to do it?"

Allison said the work actually increased once she had tenure.

Erinn D. Tucker, a tourism and hospitality professor at Temple, said working on issues of diversity and inclusion is part of who she is. 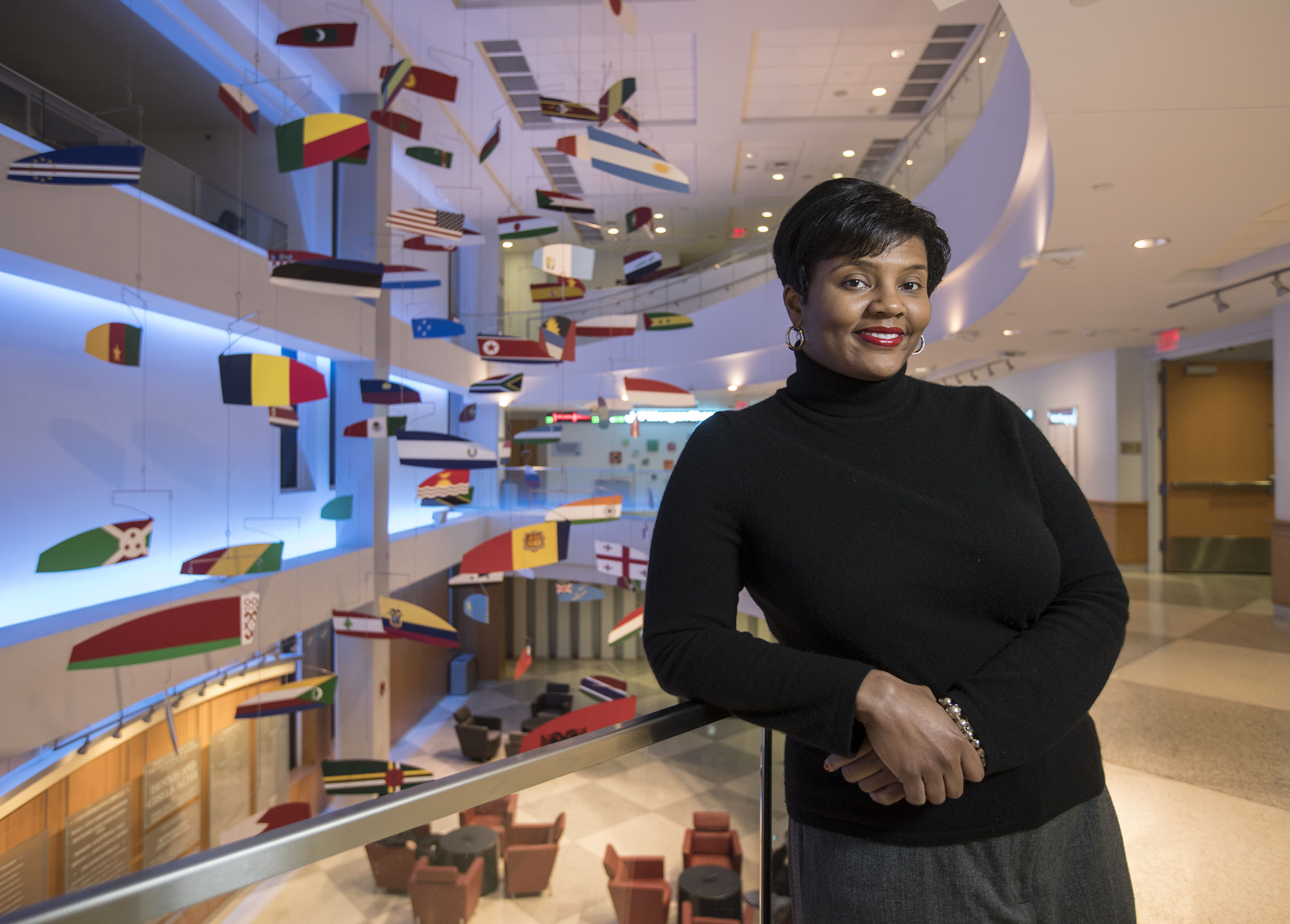 MICHAEL BRYANT / Staff Photographer
Erinn D. Tucker, a tourism and hospitality professor at Temple, says working on issues of diversity and inclusion is part of who she is.

"It's never viewed as a burden because, for me, it's my authentic story, so I can talk very clearly about the subject matter," she said.

Haddon, the Rutgers-Camden head, advises young faculty to focus on their scholarship and learn to say no, so that in the long run, they can earn tenure and "have the impact you should be having."

To even out the distribution of responsibility, faculty - regardless of age, race, or ethnicity - should help one another, said Braulio Muñoz, a sociology professor who has been at Swarthmore for 39 years.

And professors of color can look out for one another, he said.

"Senior faculty oftentimes have to be on more committees in order to prevent younger faculty from getting sucked up," he said. 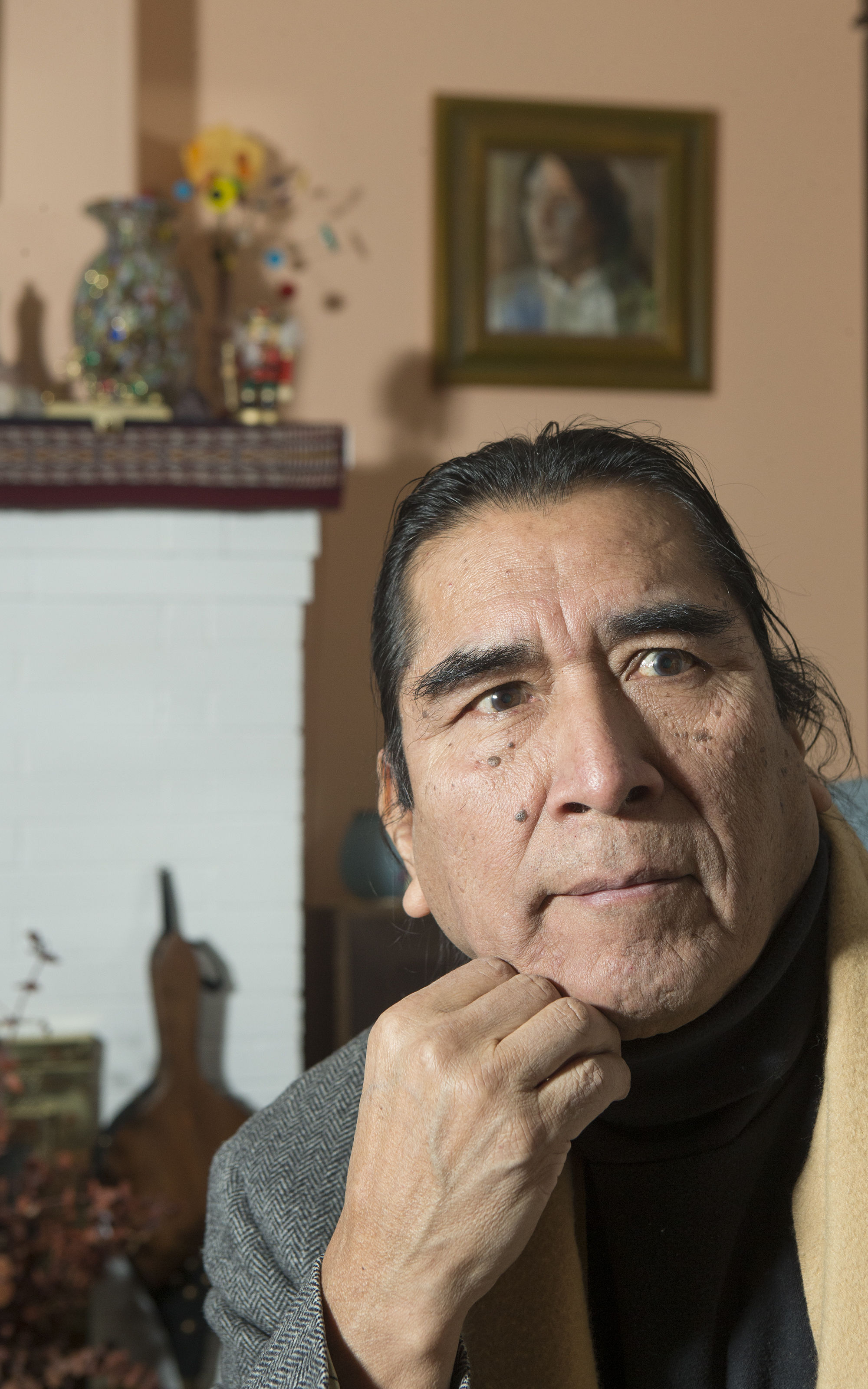 CHARLES FOX / Staff Photographer
Braulio Muñoz, a sociology professor at Swarthmore College for 39 years, says the only real solution is to hire more faculty of color.

But, Muñoz said, the only real solution is to hire more faculty of color.

"You can have all kinds of little things that can tuck in the edges and do this and do that - they are really meaningless unless you have more bodies on the faculty," he said.

Professors and administrators said they are optimistic about the progress they've seen diversifying faculties, even if it hasn't been as quick as they'd like.

Haddon noted that as she rose from law professor to dean to chancellor, she saw fewer and fewer people like her. Even in some meetings today, she's the only black woman in the room. Still, she said, "I feel a lot better today than I did when I started."

So, professors and administrators said, they'll continue to push for diversity and inclusion - continue to make their voices heard, to be role models for students, to look out for their young colleagues.

"The best way to protect junior faculty of color," Muñoz said, "is to have a lot of them already in place."