That was the total discretionary budget he was handed as the brand-new principal of Anna Lane Lingelbach Elementary, a public school in Germantown.

That’s all he’d have to pay for a whole year’s books, supplies, staff training, after-school activities, and incidentals — small but important items like postage and pizza parties. 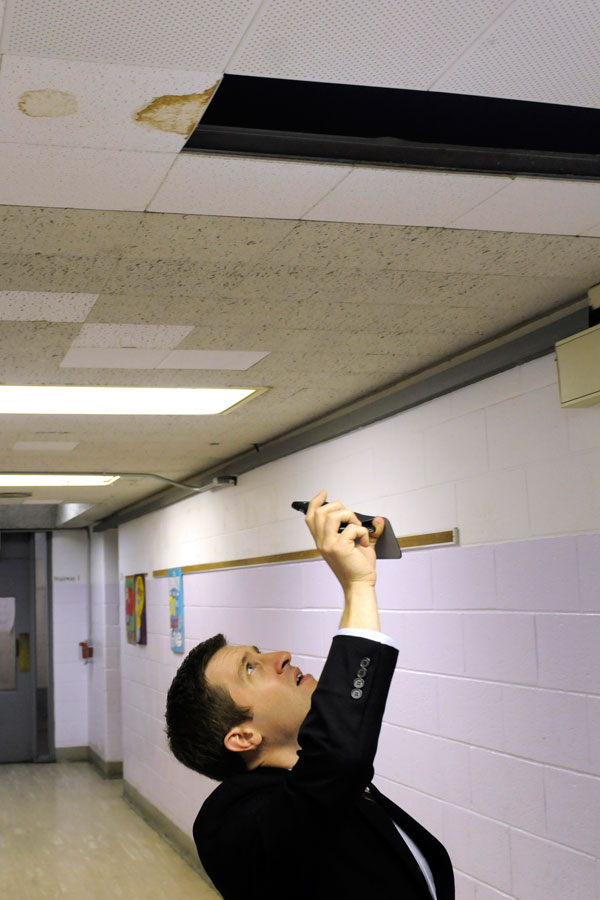 For many, Tom Wolf’s election as governor is a turning point, a change that could finally address years of Philadelphia School District cuts so deep that a school has just 40 cents to spend on each needy student.

And though Lingelbach’s situation is the extreme, public schools around the city grapple with similar problems.

On a recent day at Lingelbach, it was plain how much some schools have been left to their own devices.

“You can’t even buy groceries for $160, let alone run a school for 400 kids for a year. We are so far below just the baseline that you need to run a school.”
Principal Marc Gosselin

But there was no money to buy the test — or even paper to copy it. Gosselin, 36, a calm, boyish-looking power lifter, found a few free online resources, and ran them off at State Rep. Stephen Kinsey’s office.

“We had to beg, borrow and steal to do this, but it’s important,” he said. “We need to know how kids are reading in order to design interventions for them.”

And because Lingelbach staff is stretched so thin, Gosselin helped to administer the test himself, sitting with students on Wednesday, flashing them smiles and reminding them to “read quickly but carefully, OK?”

In one first-grade class, a boy sitting across from the principal struggled, stumbling over nearly every word. Where one classmate read 80 words in a minute, the boy read 20.

Typically, that child would work with a reading specialist, but Lingelbach has none. Computer-based interventions are available, but they can’t match what a teacher would provide, Gosselin said.

Some help is on the horizon — when the School Reform Commission canceled the teachers’ contract last month, ordering benefits changes that it said would save $54 million annually, Lingelbach was awarded $46,000 and told to expect more next year. But the cash hasn’t arrived yet, and a court battle over the legality of the SRC’s move means payments promised for February and April are iffy.

If he got that money, Gosselin said, he’s would begin to buy Google Chromebooks for his students and add after-school help for the ones who struggle. It’s not a reading specialist, he said, but it would be a start.

The school in the Poconos where Gosselin worked as an administrator had four reading specialists, three math coaches, a full-time school psychologist and two counselors for 800 students.

“Things are just tolerated here,” Gosselin said. “This would never happen in Neshaminy.” 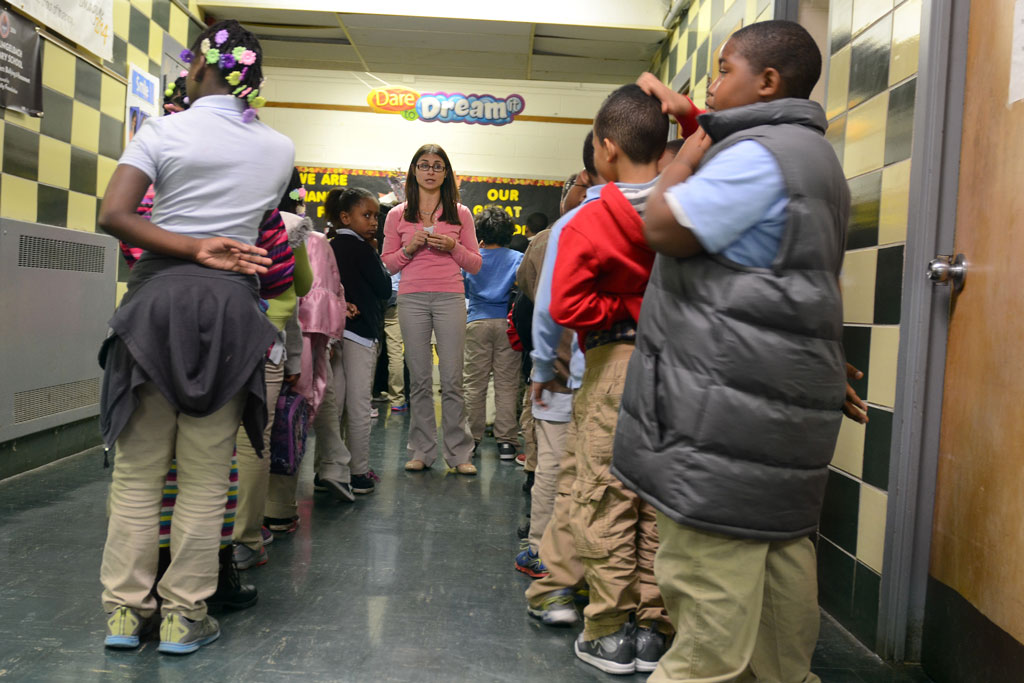 Lingelbach has some basics that pass for luxuries in Philadelphia — a full-time nurse while many schools have part-time. That’s because Lingelbach has a number of medically fragile students. There’s also a full-time counselor, but she’s been asked to teach some classes this year in order to provide enough prep time for classroom teachers.

The school has no music class nor playground equipment. There’s a single noontime aide for the whole school, so two teachers volunteer to watch students during lunch and recess. An upbeat school police officer is a plus, but she’s also assigned to two other schools.

And the boxy, Cold War-era building is a worry, suffering from years of deferred maintenance. Leaks are common, and so is standing water and clogged toilets. In one basement classroom, poison ivy creeps up the unsealed windows. There are pests, too — a mouse once jumped out of eighth grade teacher Kara Yanochko’s purse.

Yanochko, who like Gosselin lives in the Lehigh Valley and travels nearly an hour to Lingelbach because she believes in urban education, agrees.

“Sometimes you become immune to it — the vermin, the floods,” she said. “But when we can’t provide our kids the fundamentals like a clean bathroom, it’s hard for them to see the bigger picture, to know that people care about them.”

The students of working-class Germantown mostly feed the building at the corner of Wayne Avenue and Johnson Street. Nearly 90 percent of pupils live in poverty. 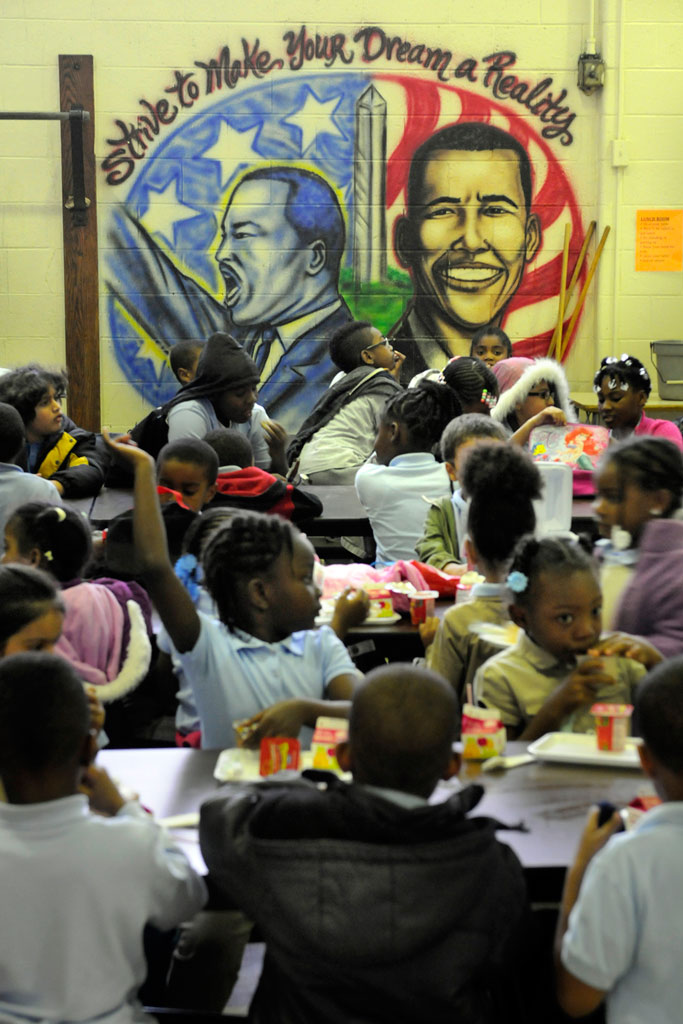 Banners hang in the office reminding people that Lingelbach hit state benchmarks for many years. But performance has dropped off recently — the school was recently rated a 56.6 out of 100 by the state, low among its peers. Charter flight has taken some students, Gosselin said, but Lingelbach has also struggled particularly in the past two years without a full-time principal.

Gosselin dreams of Lingelbach beginning to market itself to the community, but he knows it must improve academics first.

Still, the school is calm. It runs smoothly, and its staff want to be there. They have been the glue holding Lingelbach together, and classrooms are bright with materials teachers have purchased themselves.

“They bend over backward to go above and beyond what’s written in their contract, going out of their way for students,” Gosselin said.

Yanochko phrases it differently: Lingelbach functions “on parent and teacher love,” she said. Lingelbach parents, Gosselin said, are more involved even than the ones at his old suburban school.

But their role is different, said Sabrina Jones, mom to fourth-grader Vincent and an officer of the Home and School Association. Years ago, the parents’ group used to fund extras. This year, they bought math textbooks and fulfilled teacher wish lists for other basic supplies, such as crayons, calculators, glue and binders.

“I love this school,” said Jones, who volunteers there nearly every day. “But they don’t have what they need.”

Kids shouldn’t have to share books, but they do, Jones said. Kids who need extra help should get an array of resources to help, but often none are available.

And preparing students for a 1970s world, Gosselin fears.

At a conference he attended this summer, one speaker asked the roomful of educators how many of their schools had 3D printers. Most hands shot up.

“I’m thinking to myself, ‘You’ve got to be kidding me,’ Gosselin said. “The shift is happening everywhere but here.”

The school can barely make copies, but it does have an IBM Selectric typewriter sitting outside Gosselin’s office.

But Lingelbach hums on, its educators hoping for help.

While students twirled hula hoops and tossed basketballs on the patchy ground outside, groups of Lingelbach teachers met in Gosselin’s office for something he’d wanted to do all year — eat lunch together and just swap stories about best practices and frustrations.

One teacher suggested bringing schoolwide sustained silent reading to Lingelbach. Another asked for time to observe how her peers teach writing. There was commiseration over highly-scripted reading programs used a few years ago, and a suggestion to use professional development time to teach parents how to support their children’s learning.

The collegial enthusiasm was enough to keep the miracle running for another day, $160 budget or not. 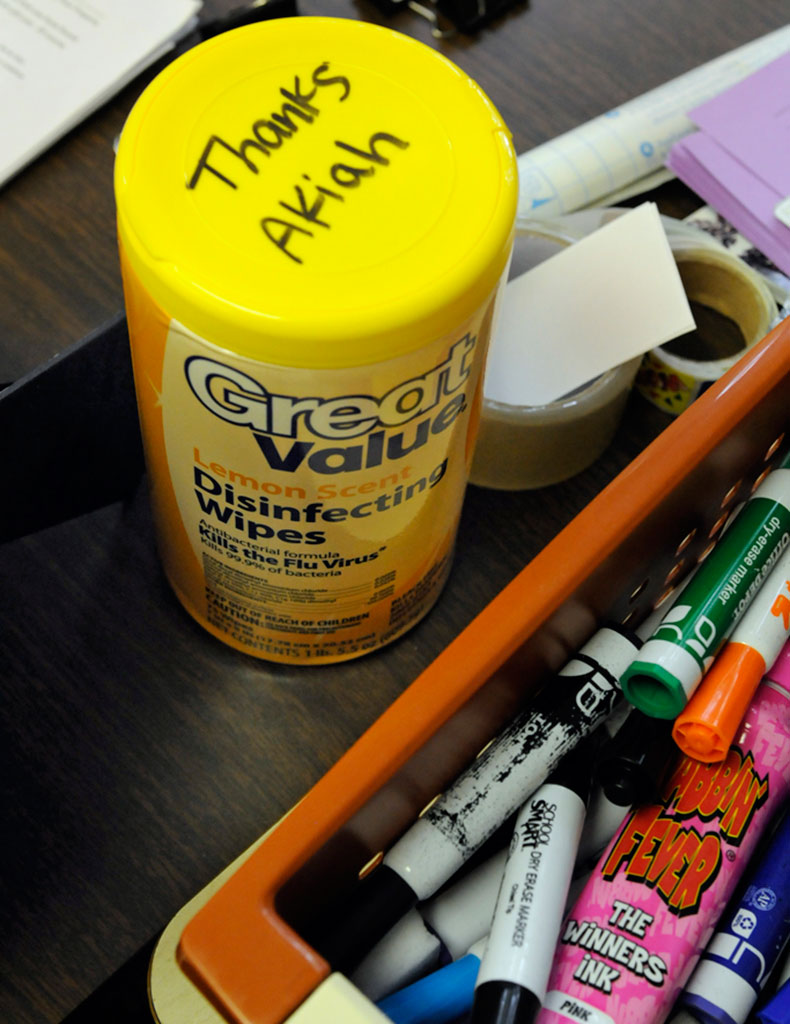 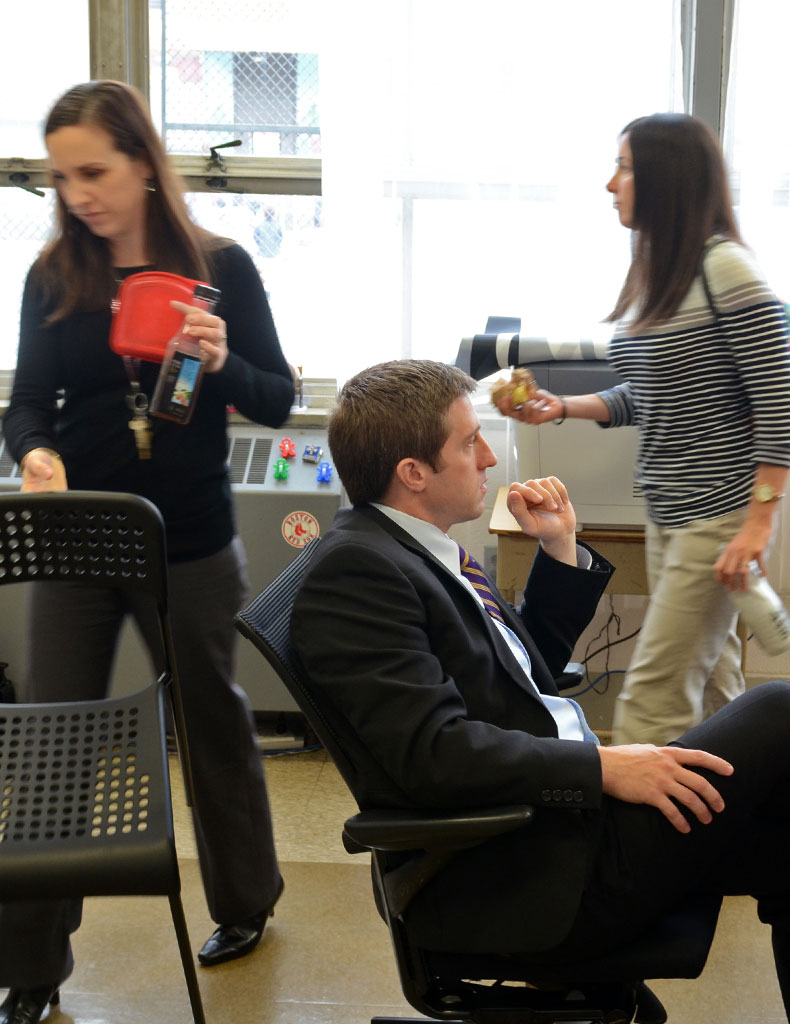 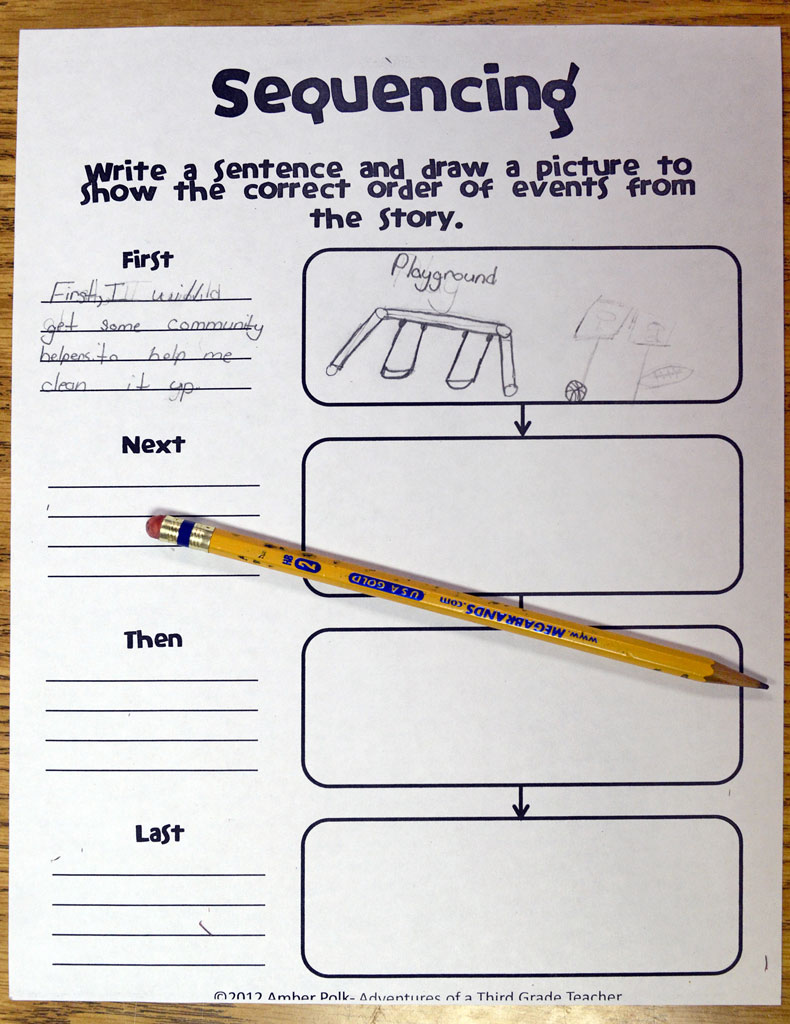