Skip to content
Hairy beasts
Tiny hairs all over the body for sensing - smell, taste, and touch.
Habitat
Preferring cities or inner-ring suburbs, it lays eggs in containers, from wheelbarrows to bottle caps.
Easy marks
What you eat and touch, your genes, and how often you shower may determine how tasty a target you are.
Tiny terrors
Roughly the size of a small grain of basmati rice; males are a little smaller than females.
Feeding frenzy
Males feed mainly on nectar; females seek blood meals to get protein for their developing eggs. 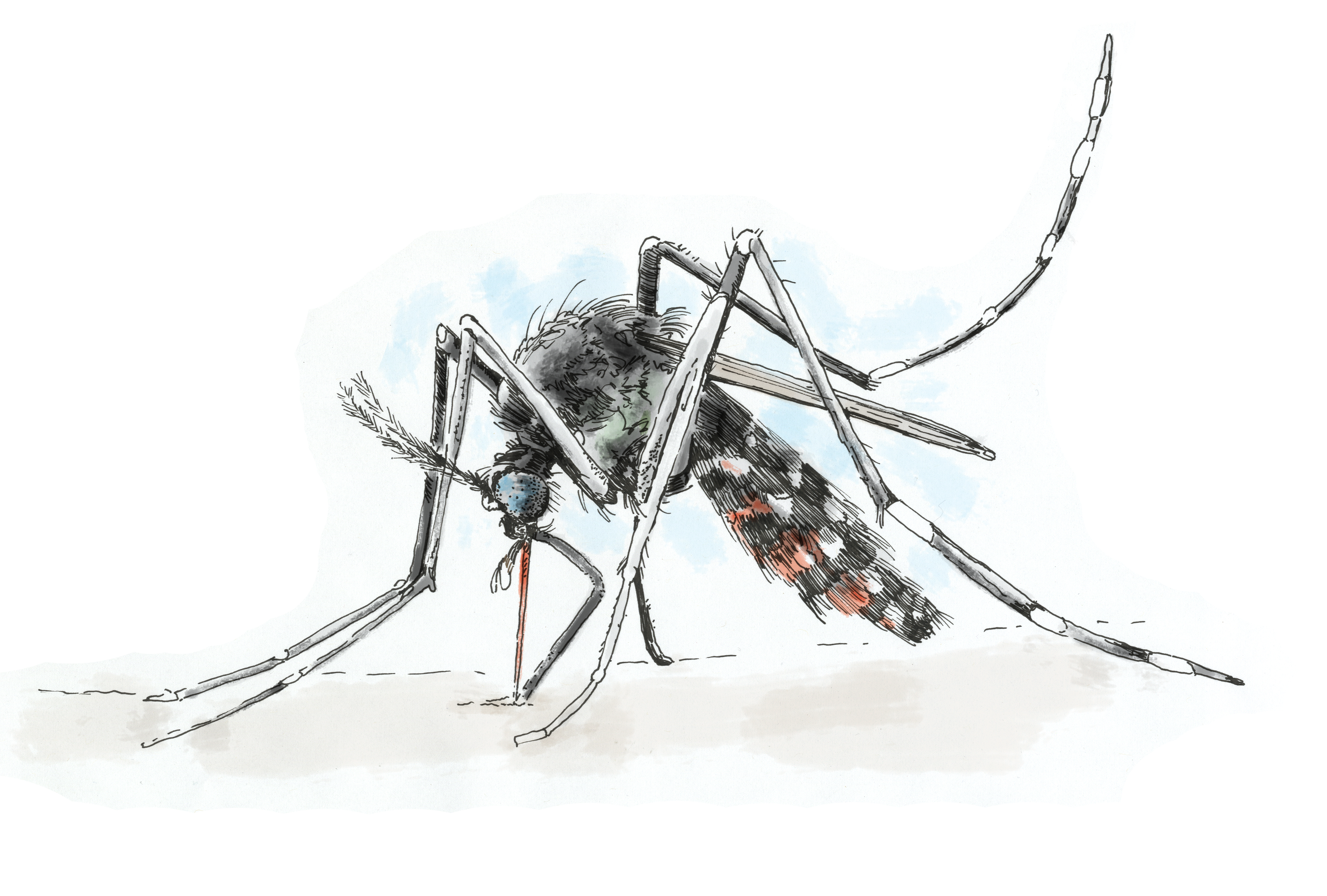 Could this mosquito bring Zika to Philadelphia? 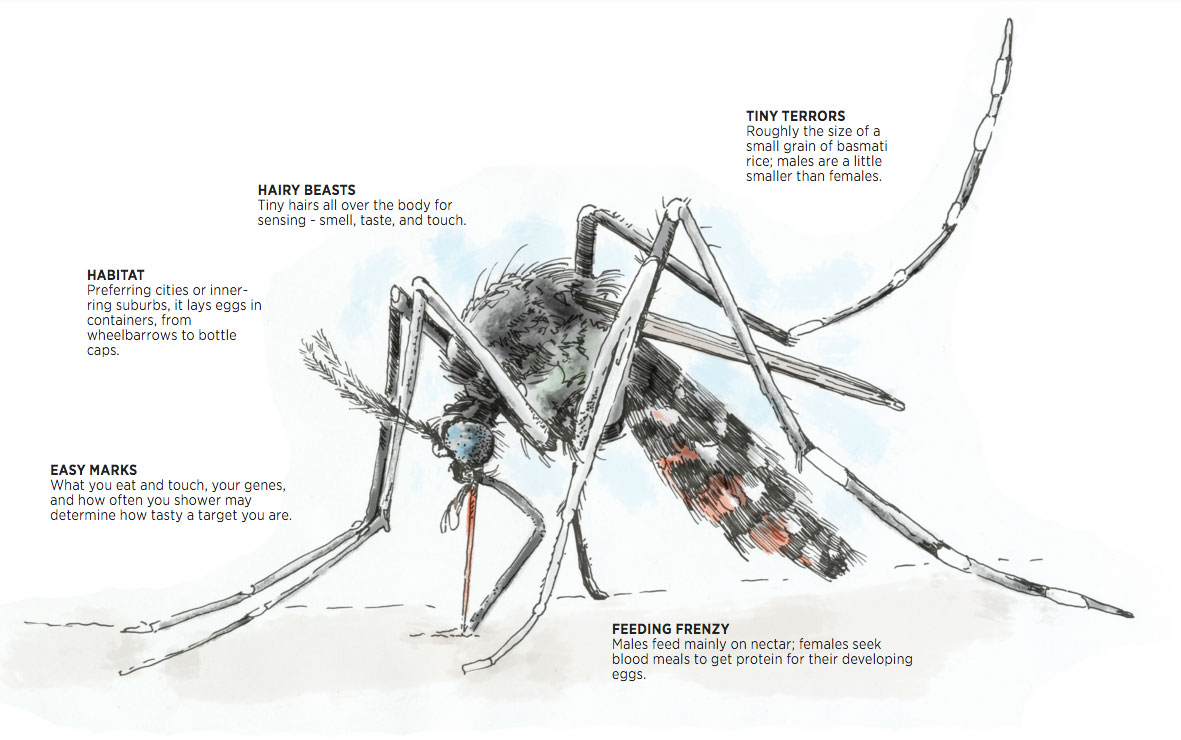 The Asian tiger, predominantly an urban-dweller, is the most likely U.S. species to spread the virus, but it's a long shot.
By Don Sapatkin / Staff Writer, dsapatkin@phillynews.com, Illustrations by Cynthia Greer / Staff Artist

If you were bitten by a mosquito last summer, or the summer before that, chances are it was an Asian tiger.

This nasty, prolific, people-loving mosquito is one of the most invasive in the world. Less than 20 years after arriving in the Philadelphia region, Asian Tigers have proven themselves to be "vicious biters," said Jon Gelhaus, curator of entomology at the Academy of Natural Sciences.

Weather forecasts suggest that conditions could be ripe for a lot of mosquitoes this summer. On the bright side, this isn't the variety that has been spreading the Zika virus.

But it's not entirely out of the question.

Scientists who study mosquitos say the Asian tiger can carry Zika and similar, more familiar viruses such as dengue, but for a number of reasons it's lousy at transmitting them.

But viruses and the mosquitoes that carry them move in a sort of evolutionary dance, changing over time in ways that benefit each.

And that is what's causing some scientists to view the Asian tiger mosquito — a.k.a. Aedes albopictus — with more concern.

One factor that makes Asian tigers more of an annoyance than a threat is the fact that people are not their first choice of food. Surprising shifts can occur in both animal and virus, though.

For example, researchers at Johns Hopkins found a few years ago that the dengue virus "turns on" mosquito genes to make the insects hungrier, so they will bite more and spread more disease. Scientists in Brazil are currently studying the possibility that birth defects linked to Zika infection during pregnancy are more likely if a woman had previously been infected with dengue.

Although men can transmit Zika to women through sex, most infections worldwide have been caused by Aedes mosquitoes.

In the Americas, two species in that genus can carry Zika:

Aegypti used to show up every summer in Philadelphia during colonial times. It was responsible for the 1793 yellow fever epidemic that killed 10 percent of the city's population. But it has not thrived locally since the accoutrements of modern living — screens, sewers, air-conditioning — cut off much of its human food supply.

In the United States, albopictus was first detected in Houston in 1985, and spread rapidly north and east as the tires were transported by truck. The hitchhikers arrived in the Philadelphia region in the mid-1990s. By 2013, they were in every county in New Jersey. Pennsylvania has reported them in 38 counties, but they tend to cluster in densely populated areas. These are urban mosquitoes. 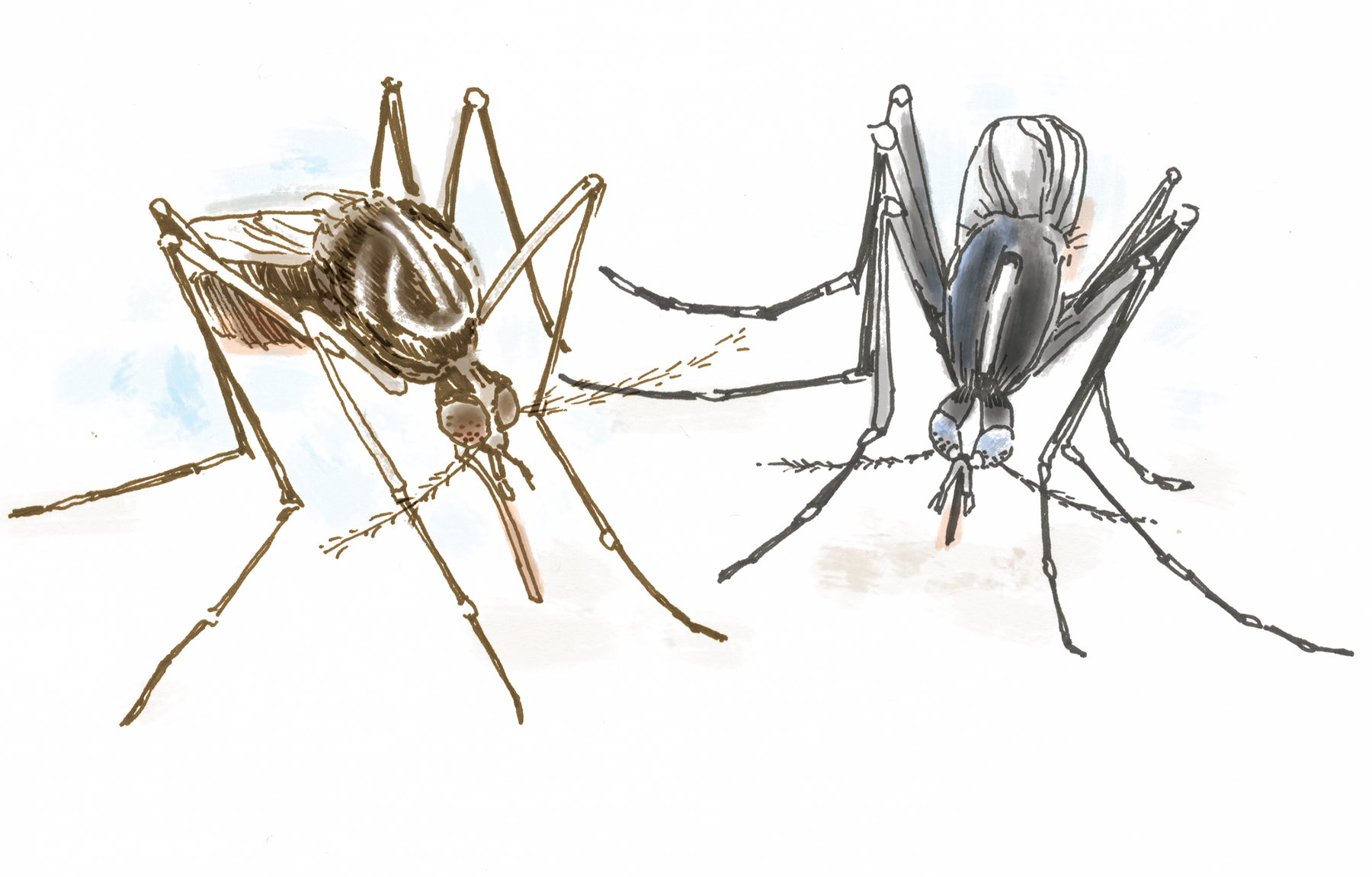 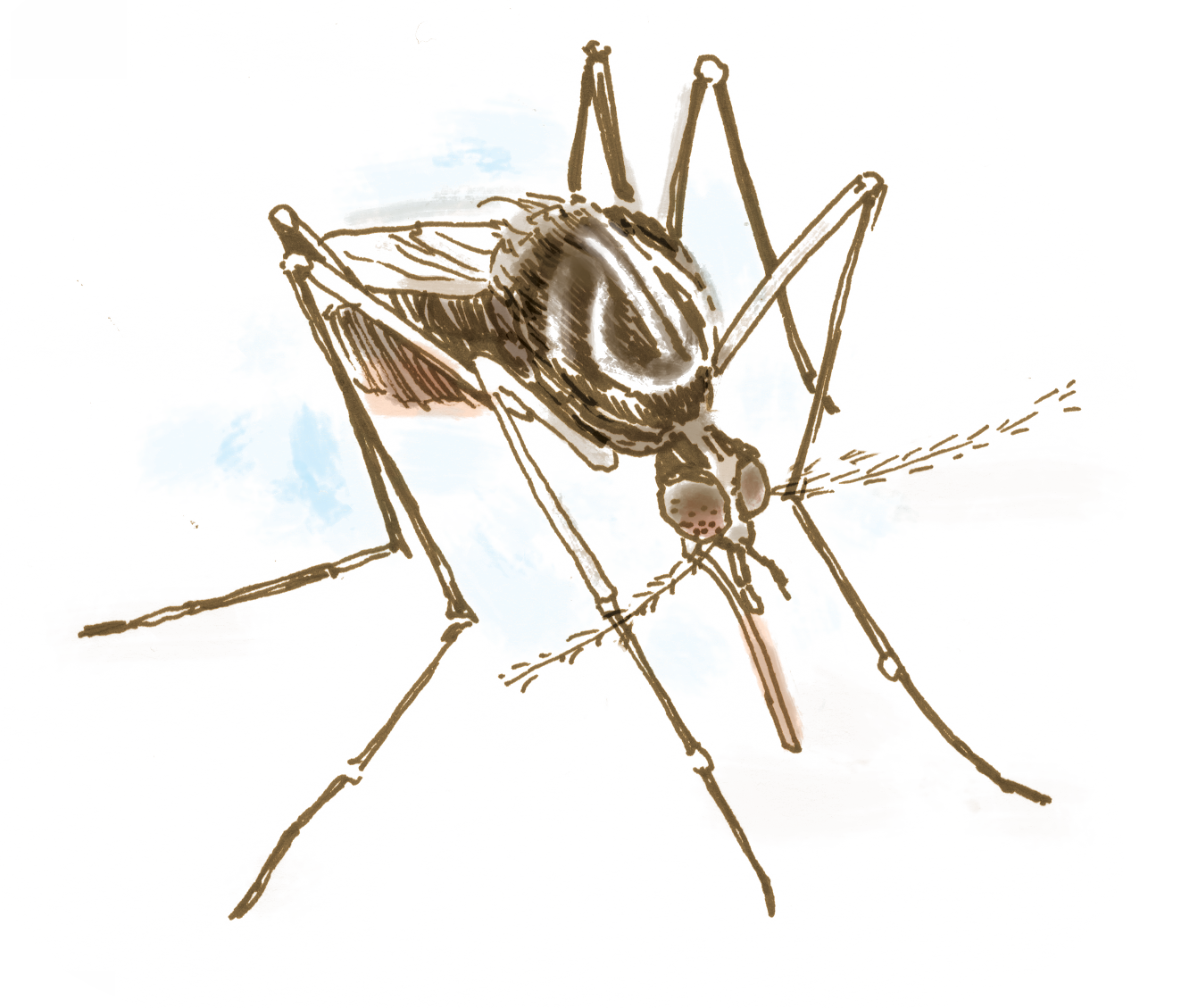 Native to: Africa; spread to the tropics in many parts of the world with early European traders. Range extends into southern U.S.

In the news: Considered the primary vector of Zika virus in South and Central America. Also carries dengue and chikungunya viruses.

Notable: Responsible for Philadelphia’s deadly 1793 yellow fever epidemic. Rarely shows up here now due to better mosquito control, window screens and air-conditioning, and is not considered a threat locally.

Potential range of even very low numbers of Aedes aegypti, in the continental United States 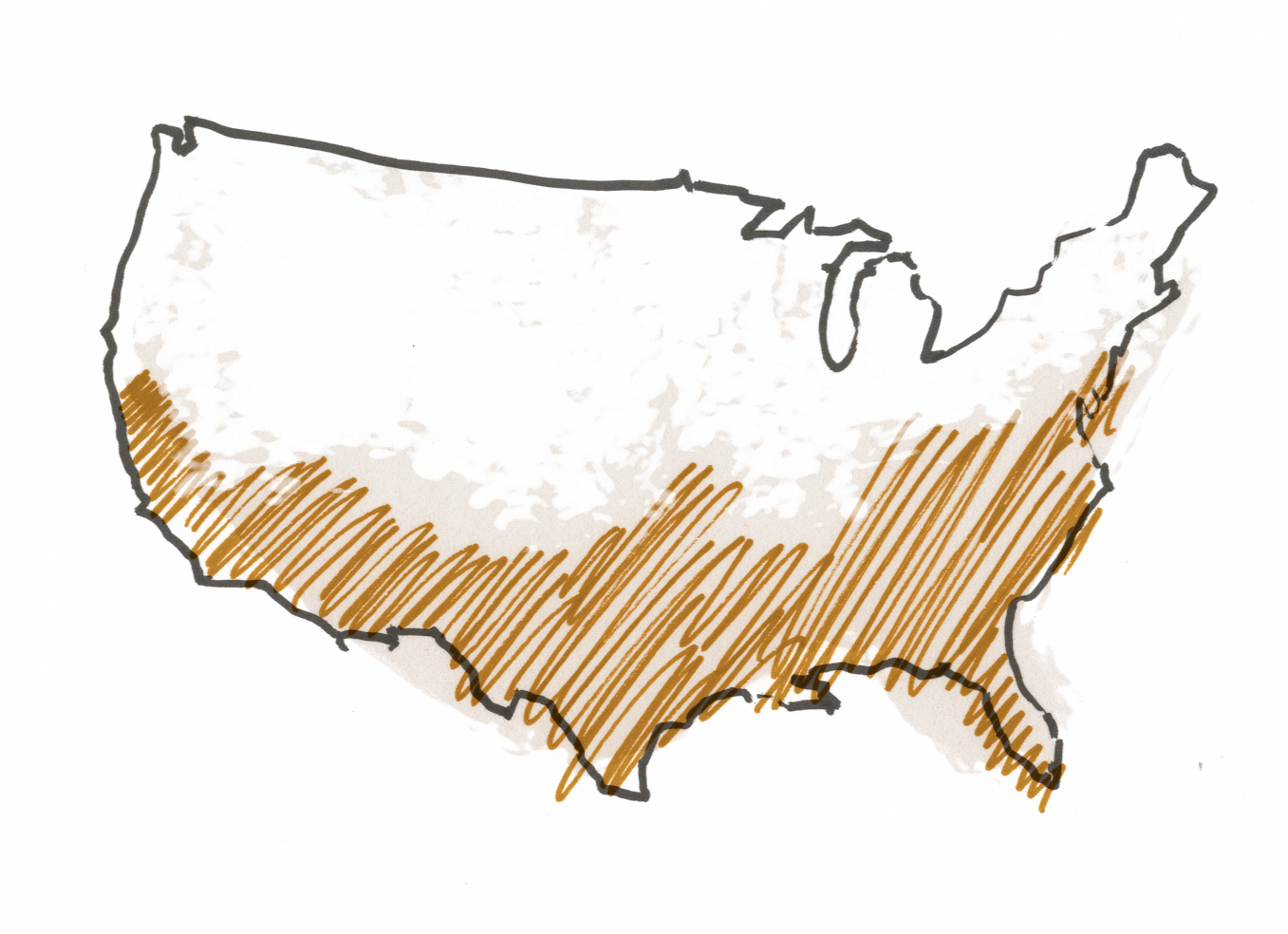 New maps released last week by the U.S. Centers for Disease Control and Prevention show a far wider distribution of both mosquitoes than is generally recognized. The maps show the “potential” range of insect populations too small to spread disease. (New Jersey authorities last found a small colony of aegypti in 1991. Pennsylvania authorities identified albopictus in just over half the state’s counties in 2015.) 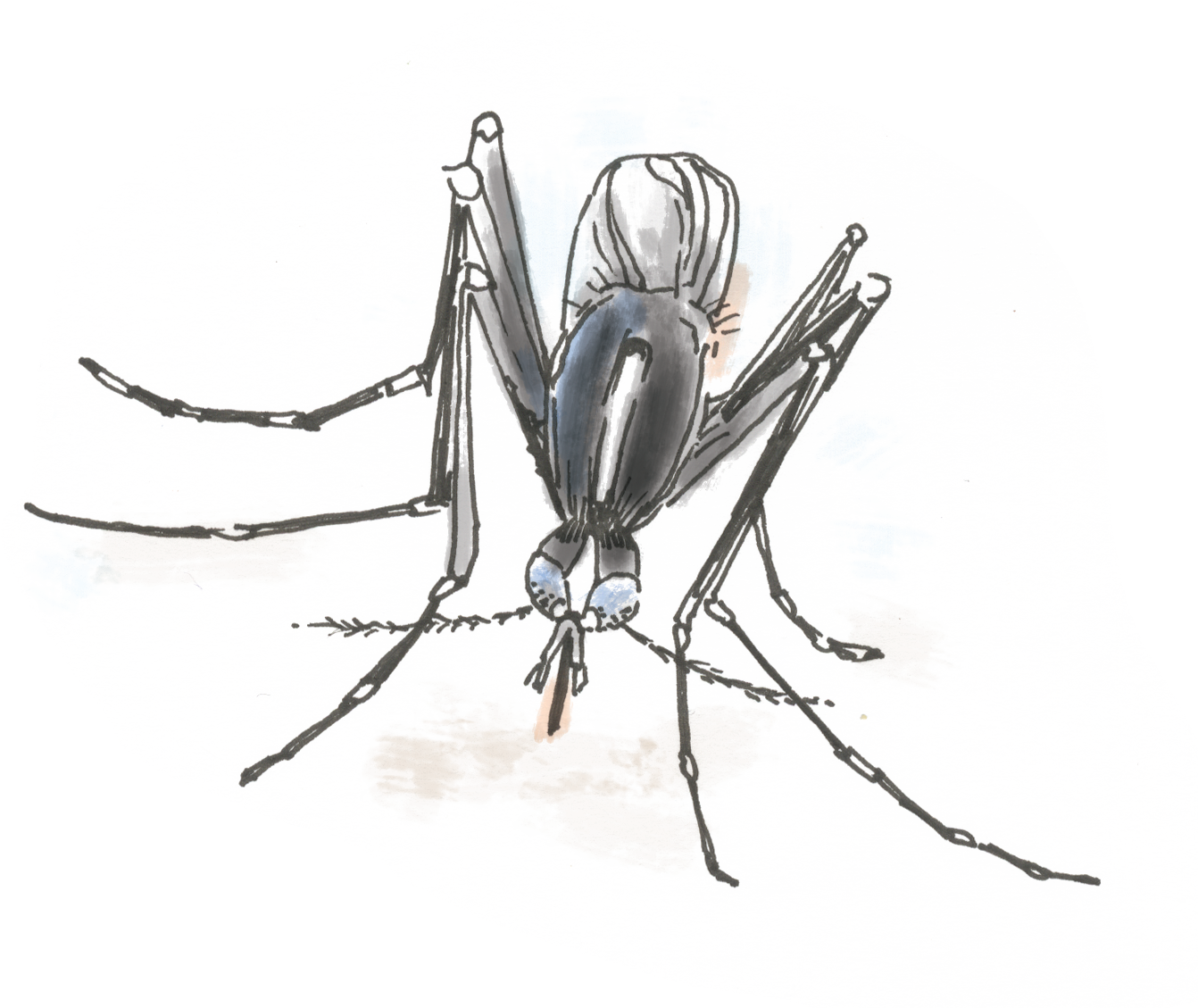 Native to: Asia; a variety likely from Japan spread to U.S. as eggs laid in a shipment of used tires in mid-1980s; has spread north and east mainly along interstate highways.

In the news: It’s the top nuisance mosquito in the Philadelphia area. But is considered an inefficient transmitter of Zika, dengue and chikungunya partly because it often bites mammals other than humans.

Notable: Rarely seen in rural areas. Like aegypti, has adapted to live with humans.

Potential range of even very low numbers of Aedes albopictus, in the continental United States 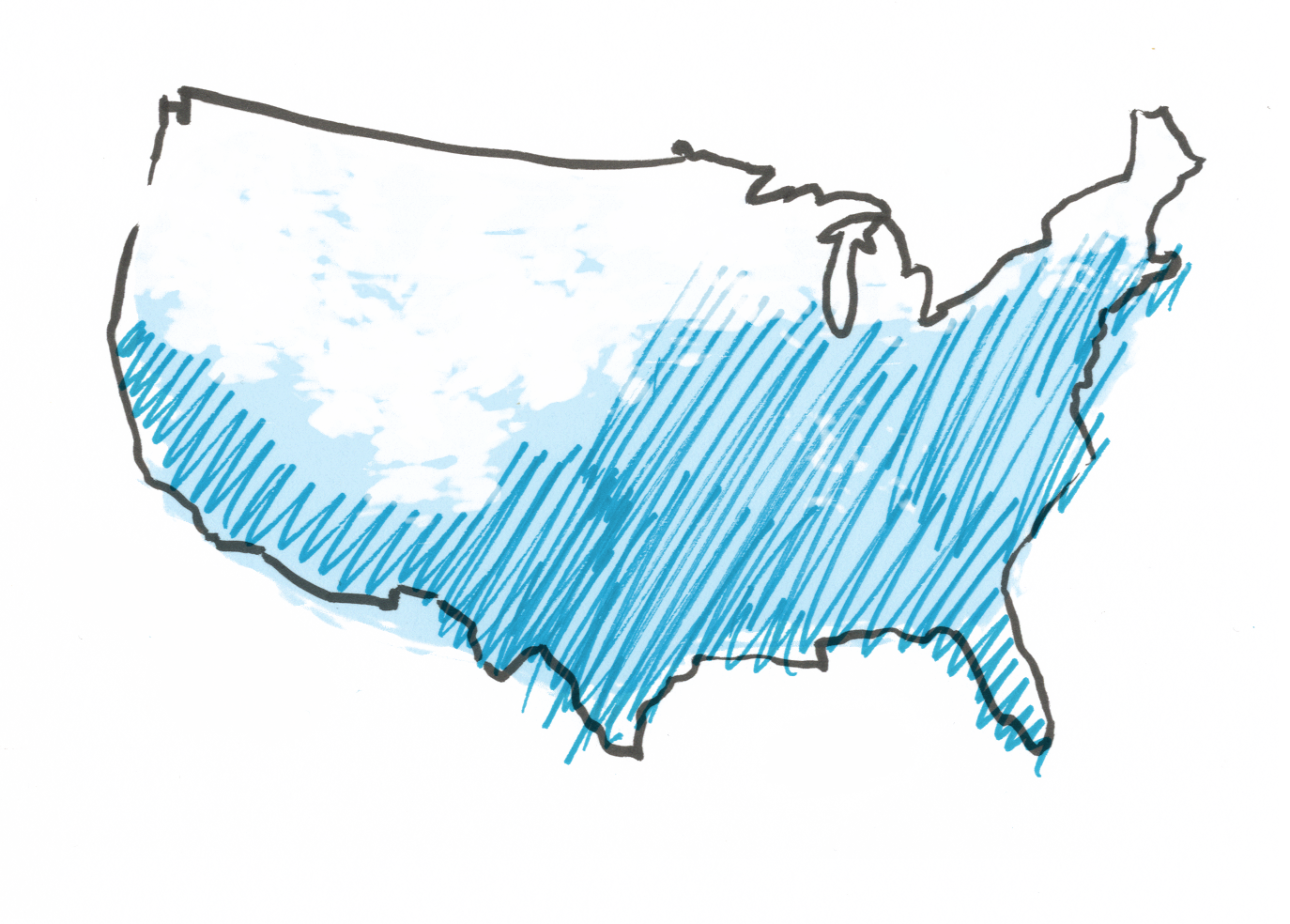 New maps released last week by the U.S. Centers for Disease Control and Prevention show a far wider distribution of both mosquitoes than is generally recognized. The maps show the “potential” range of insect populations too small to spread disease. (New Jersey authorities last found a small colony of aegypti in 1991. Pennsylvania authorities identified albopictus in just over half the state’s counties in 2015.)


Potential range of even very low numbers of mosquitoes, in the continental United States


New maps released last week by the U.S. Centers for Disease Control and Prevention show a far wider distribution of both mosquitoes than is generally recognized. The maps show the “potential” range of insect populations too small to spread disease. (New Jersey authorities last found a small colony of aegypti in 1991. Pennsylvania authorities identified albopictus in just over half the state’s counties in 2015.)

Albopictus is not known to spread Zika in the wild. But laboratory experiments show that the mosquito meets the three critical criteria to cause disease: It can become infected by feeding on an infected animal or human. Its gut is a hospitable place for the virus to replicate. And the virus can migrate between gut and salivary gland, making its bite infectious.

Still, to cause disease the mosquito has to be interested in biting a host carrying the virus — and then biting again to transmit it. 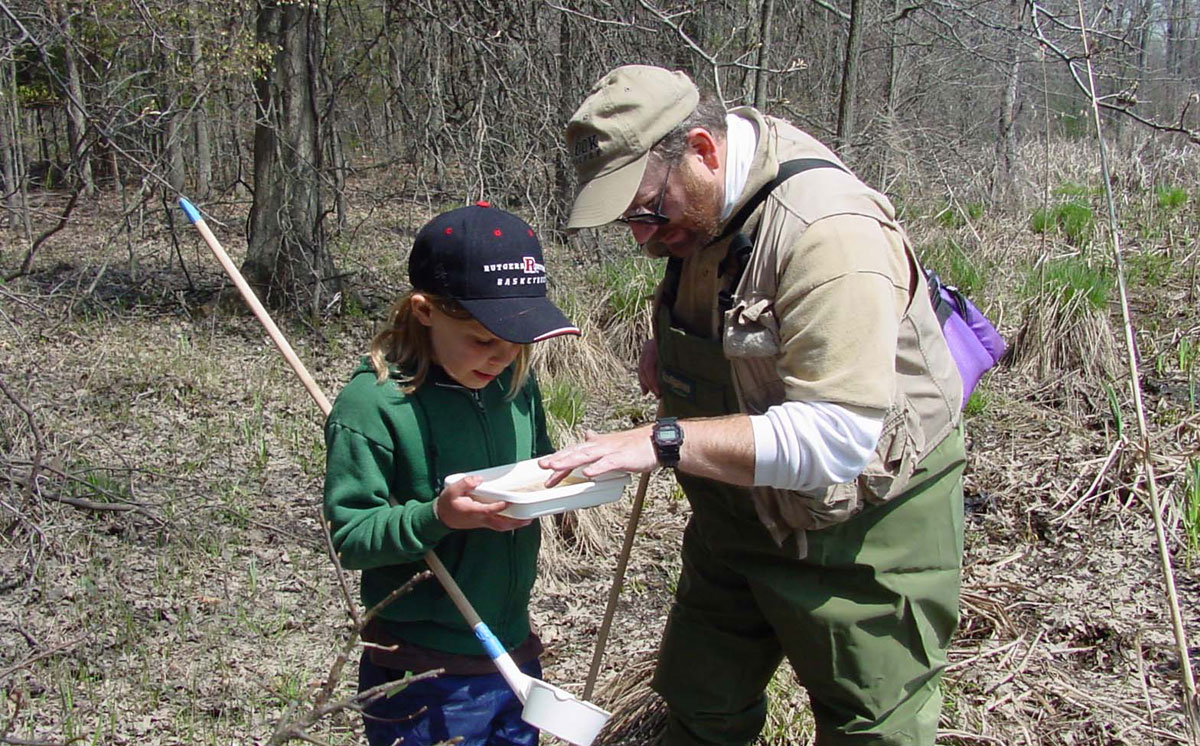 Courtesty of Scott Crans
Scott Crans reviews samples from a permanent swamp habitat with his daughter Alexandria during Take Your Kids to Work Day.

"This is an odds situation," Scott C. Crans, a field researcher at Rutgers University's Center for Vector Biology, said by email. So far, 312 people in the U.S. are known to have picked up Zika, all linked to travel outside the country.

The Asian tiger "is very likely to feed on a pet dog, cat, squirrel or rat" instead of a human, Crans said, and could die naturally without ever encountering one.

"What I am getting at here is you need a lot of virus introductions in the human population to get it into the mosquitoes, and a lot of mosquitoes in the population that feed mainly on people," said Crans, who coordinates training for mosquito programs around the state. "So it is possible we will see some spotty local transmission in the U.S., but not likely anything as explosive as we are seeing in tropical areas," especially in the Northeast.

The biggest concern: The virus could mutate, making transmission easier for the Asian tiger. That has not happened with dengue and chikungunya, which have been around here longer — for the dengue virus, decades longer.

And Aedes albopictus has proved itself eminently adaptable, and a highly successful nuisance that is showing more fondness for human blood.

Unlike the Culex mosquitoes that engorge themselves on a single blood meal at dawn or dusk, spreading West Nile virus, the Asian tiger snacks rapidly throughout the day. It is fast and relatively painless at the moment its proboscis plunges into your flesh, making it harder to swat. Mosquito-control agencies say it now accounts for the majority of complaints, overtaking even the notorious hordes of salt marsh mosquitoes at the Jersey Shore. 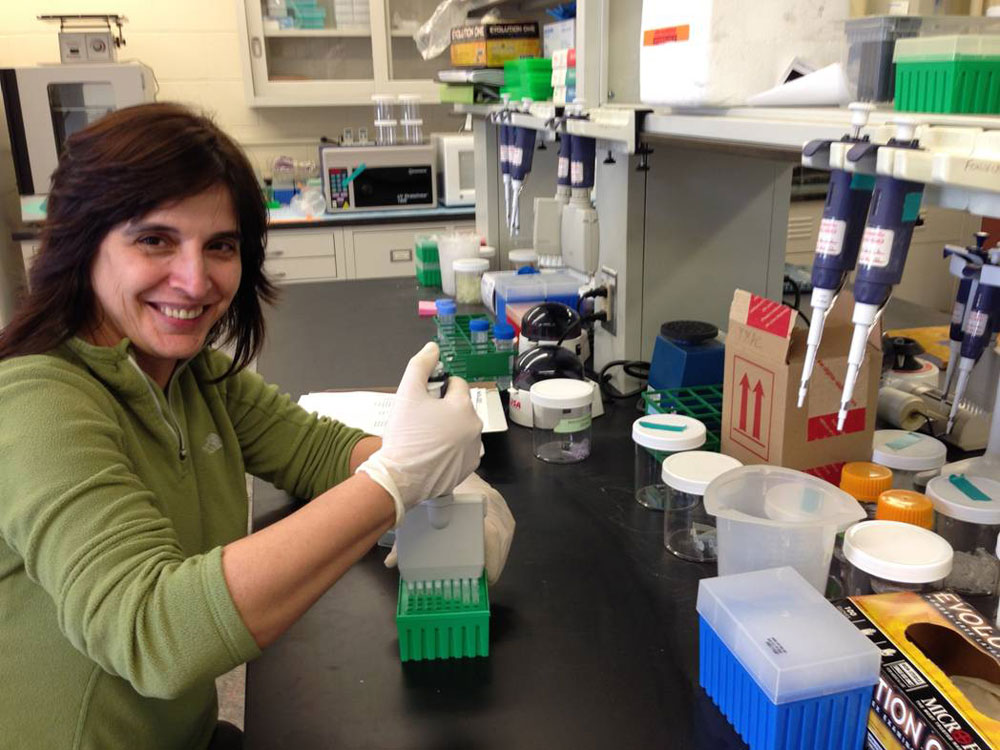 Dina M. Fonseca, a professor of entomology at Rutgers University, warns that if temperatures continue to be higher than normal, it could be a banner year locally for Asian tiger mosquitoes. Fonseca worked with genetic markers of the insect at her lab in 2014, part of her study of the species' rapid expansion in the United States. (Photo by Kristina Carle)

Dina M. Fonseca, a Rutgers professor of entomology, has been studying Asian tiger behavior in different places. DNA analysis of blood from trapped mosquitoes found that albopictus was nearly 50 percent more likely to feed on humans in suburban Monmouth County than in inner-city Trenton. Her team surmised that the pit bulls kept in the city's low-income neighborhood offered a preferable meal.

Then they started collaborating with a group in Baltimore, "and oh, boy, we saw rats as a major source," Fonseca said. "We never saw rats in Trenton."

“It could be a banner year for Asian tiger mosquitoes.”
Dina M. Fonseca, Rutgers professor of entomology,

"The entire population has to participate in the control," said George Dimopoulos, a professor at Hopkins' Bloomberg School of Public Health.

Mainly, that means getting rid of standing water — and persuading your neighbors to do the same — in every conceivable place, every week.

Depending on the weather, the first eggs could hatch at the end of this month. Adult Asian tigers start emerging in late May or June, with the bulk in July and August.

The highest numbers so far were counted in 2012, when spring came early and warm. The latest 90-day forecast from the National Weather Service calls for warmer than normal temperatures through June.

"If it continues like this, I am holding my breath," Fonseca said, "it could be a banner year for Asian tiger mosquitoes."