“I questioned whether I was still in the U.S.”
Stephanie Farr and Sam Wood / Staff Writers
farrs@phillynews.com / samwood@phillynews.com
Listen with headphones for best experience.
MICHAEL BRYANT / Staff Photographer

“I questioned whether I was still in the U.S.”
Stephanie Farr and Sam Wood / Staff Writers
farrs@phillynews.com / samwood@phillynews.com
SKIP VIDEO
In Philadelphia, just four miles from where America declared its independence is a hidden-in-plain-sight wasteland along railroad tracks where the most desperate of Philadelphia's addicts have handed over their lives and liberty to heroin.

In Philadelphia, just four miles from where America declared its independence, is a hidden-in-plain-sight wasteland along railroad tracks where the most desperate of Philadelphia's addicts have handed over their lives and liberty to heroin.

Along a half-mile gorge cut by a Conrail line that runs through Kensington and Fairhill, tens of thousands of used syringes and their tossed off orange caps cover the sloping ground like a plague of locusts. The contaminated needles make conditions so hazardous that even some police officers are reluctant to traverse the embankments to get to dead overdose victims at the bottom.

Along a half-mile gorge cut by a Conrail line that runs through Kensington and Fairhill, tens of thousands of used syringes and their tossed off orange caps cover the sloping ground like a plague of locusts. The contaminated needles make conditions so hazardous that even some police officers are reluctant to traverse the embankments to get to dead overdose victims at the bottom. 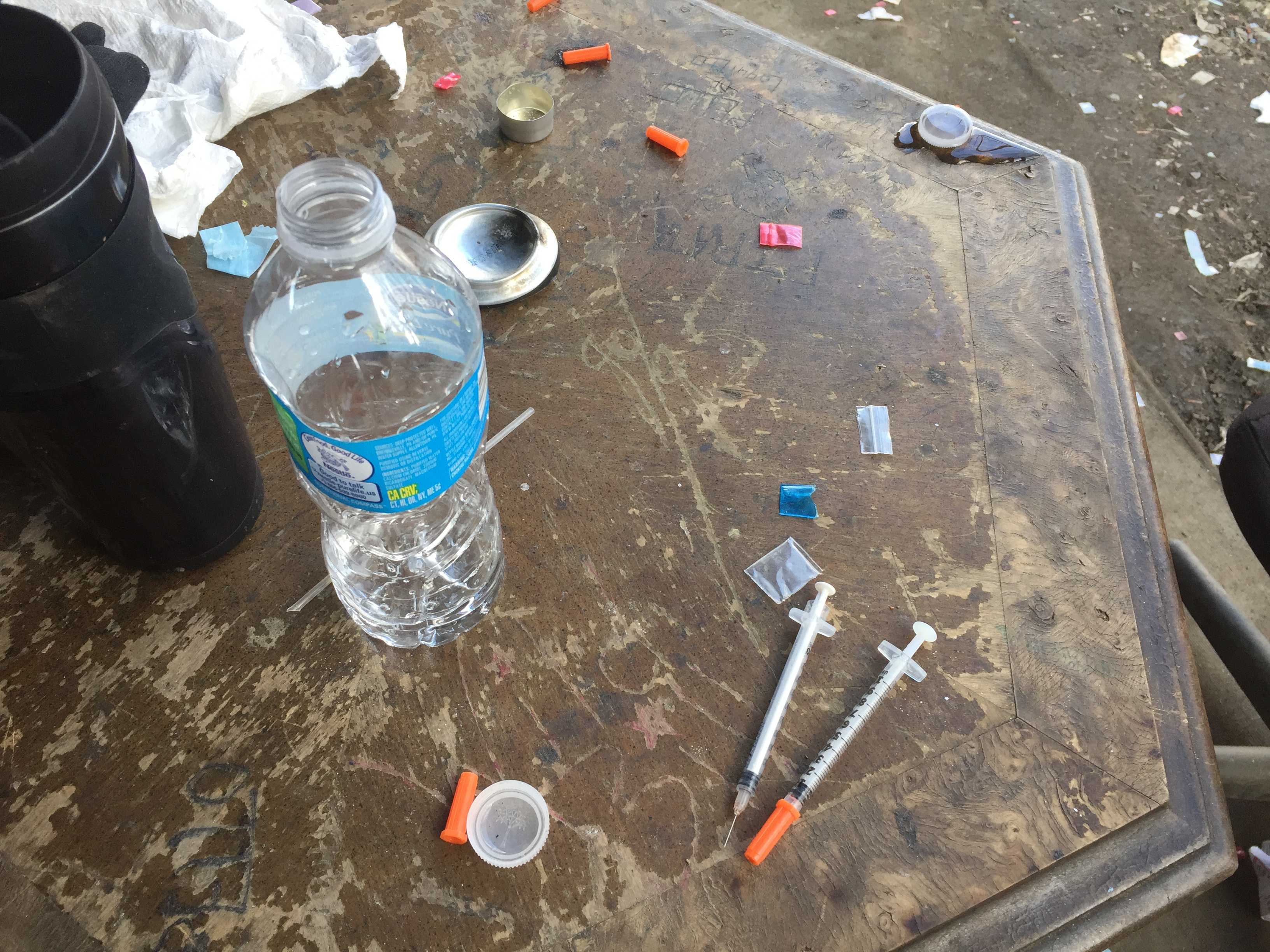 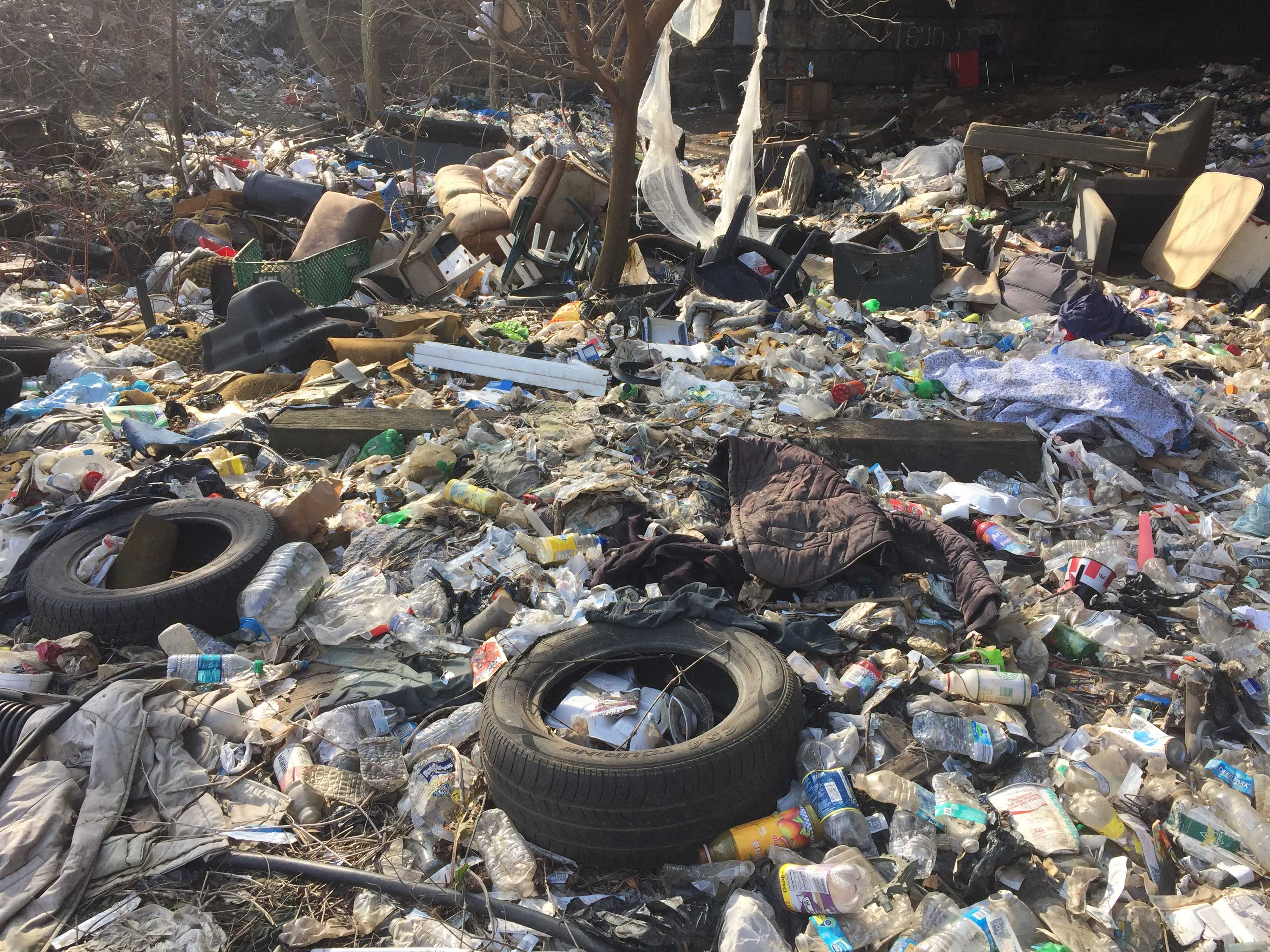 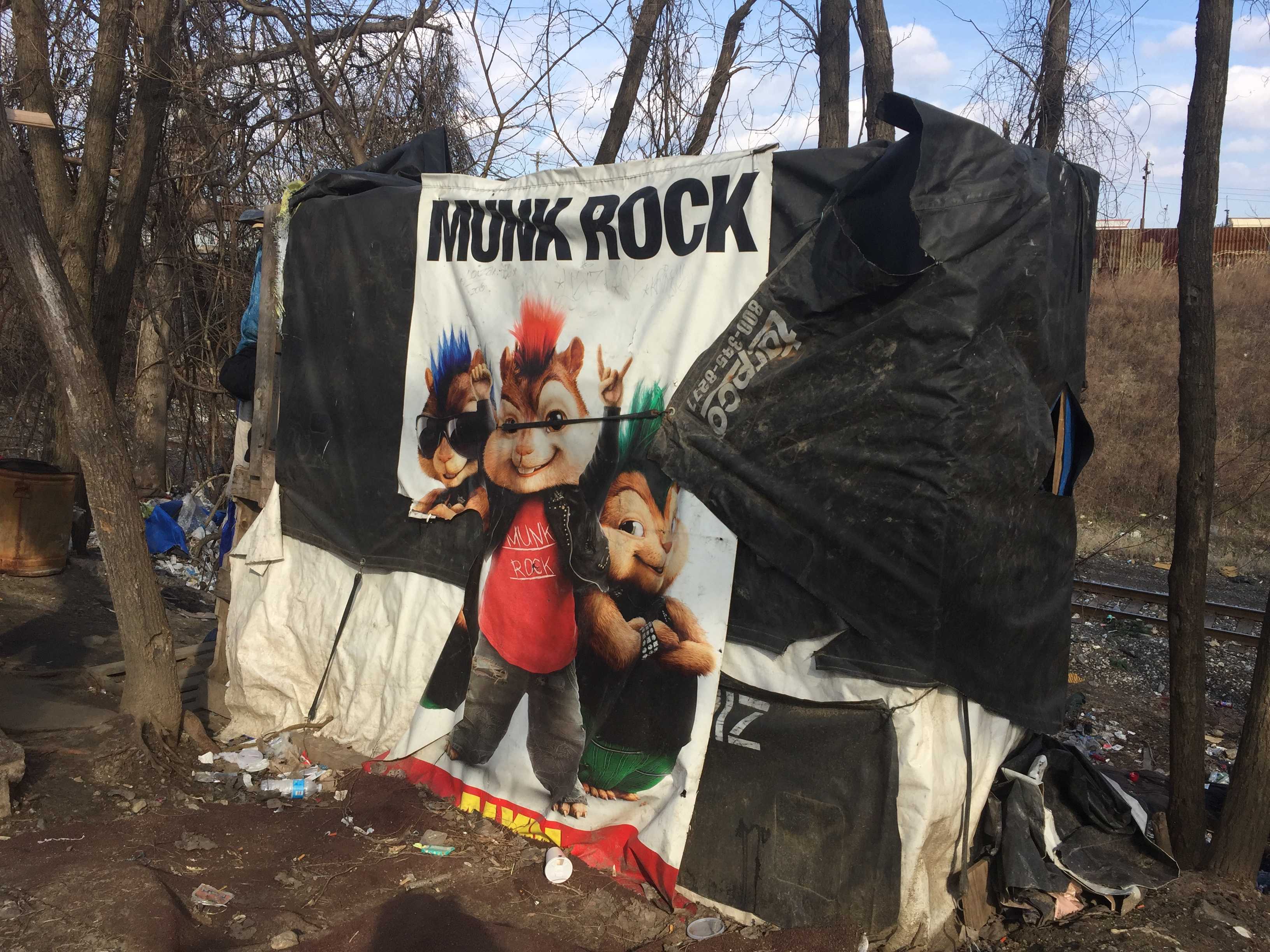 The squalor and chaos along the rail line resembles a scene from Hieronymus Bosch. Addicts - many with needle marks so fresh that still-drying blood glistens in the sun - twist their bodies into unnatural forms to crouch and teeter on the trash-covered banks as they shoot up. Others sleep under nearby bridges or in makeshift shelters surrounded by garbage, drugs, and death. 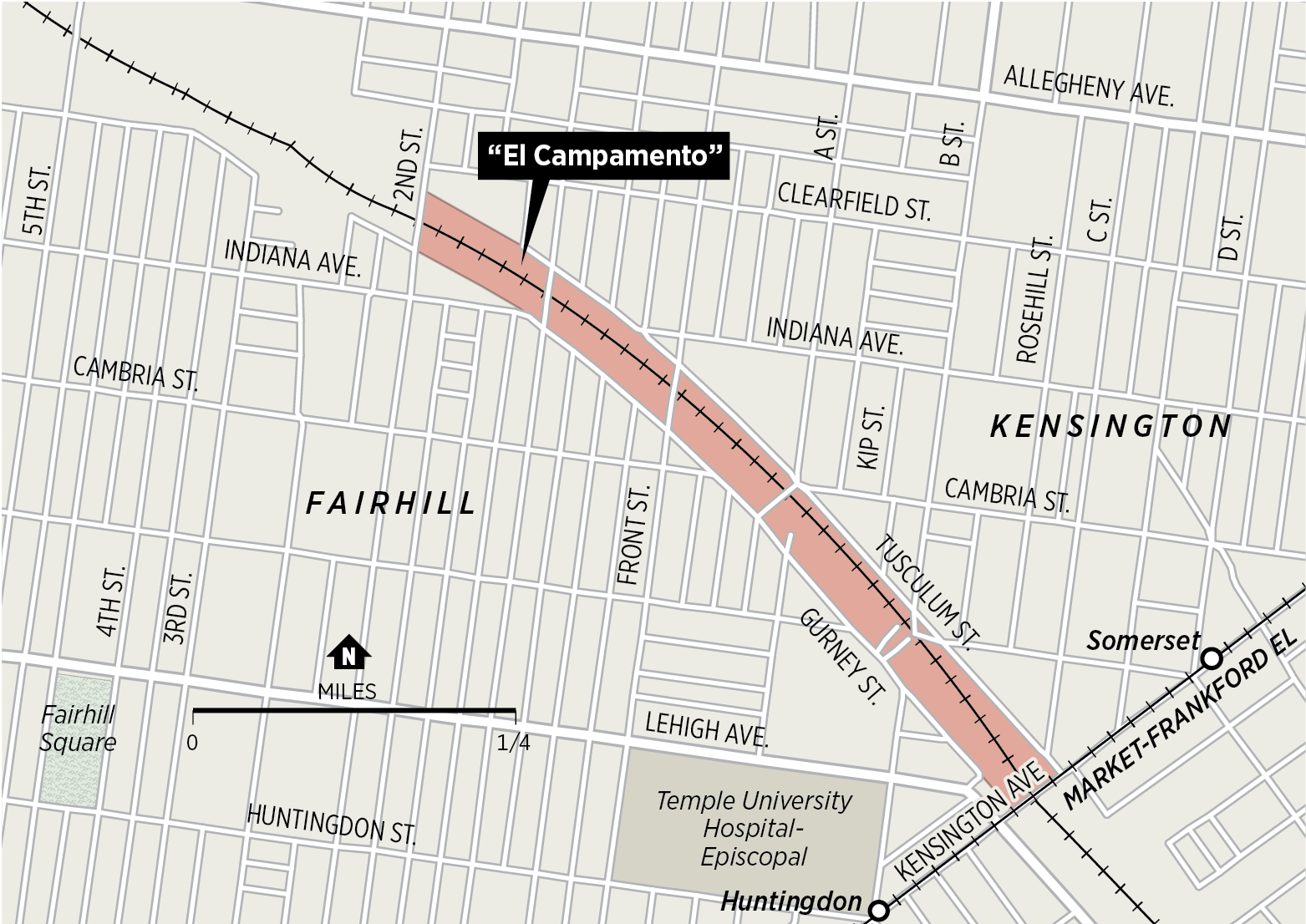 At a plywood shack known to denizens as "the hospital," users too squeamish to inject themselves can pay a few dollars to a Ray-Ban-wearing addict who looks like he stepped out of a Mad Max movie.

"People come here when they have trouble to hit themselves," said the 45-year-old man, who declined to give his real name. "So I hit them in the neck, you know what I mean? So I'm like the doctor. So they pay me."

This apocalyptic terrain, sometimes called El Campamento, is home to 75 to 125 addicts at any given time. Many more transient users come each day to get high. It is the festering epicenter of Philadelphia's heroin epidemic, a benighted territory the DEA considers the East Coast's largest heroin market, smack dab in an area often referred to as the Badlands. And it has gone largely ignored for three decades. 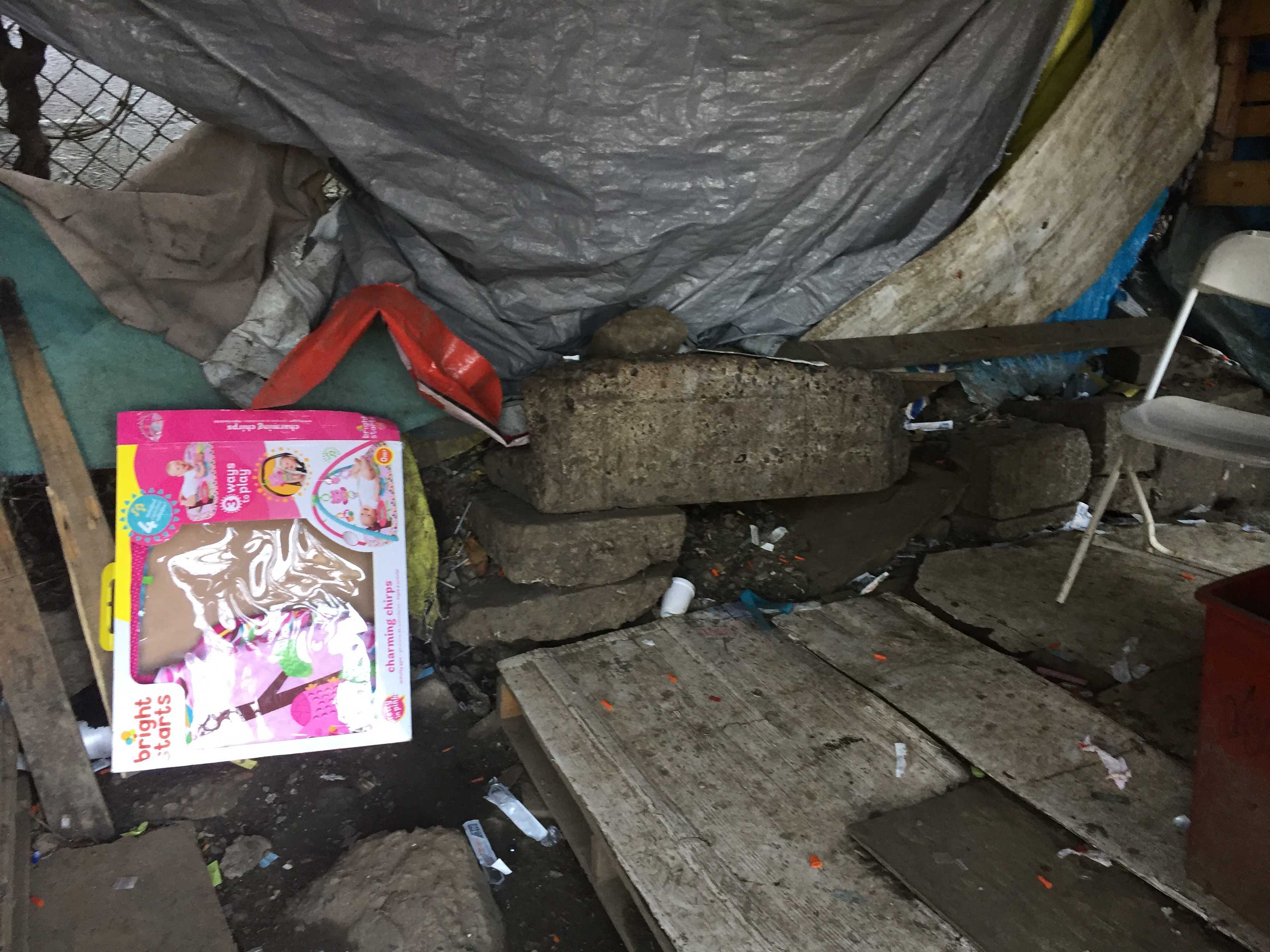 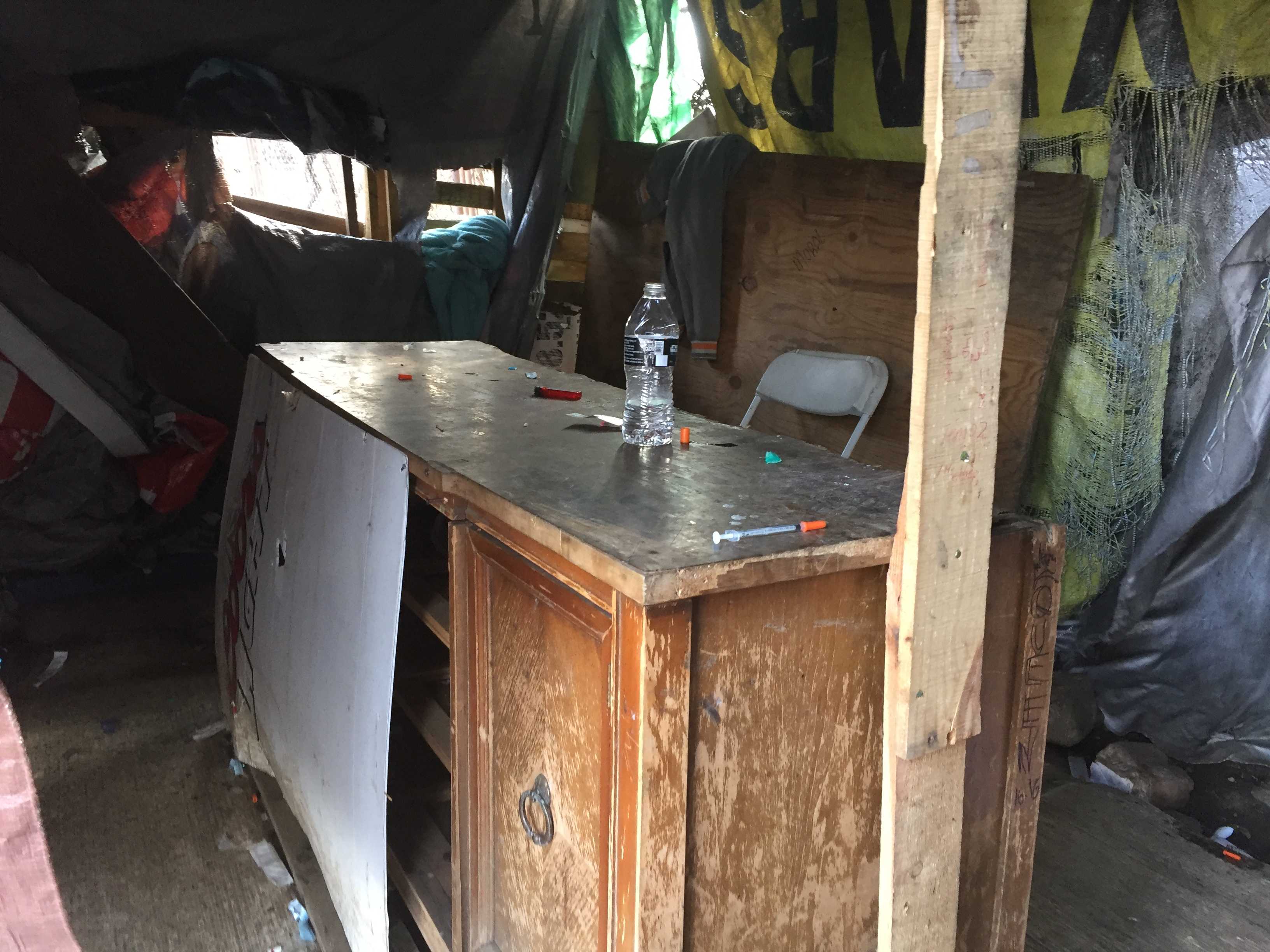 STEPHANIE FARR / Staff
When users are too squeamish to inject themselves with heroin they can come to this shack along the gulch that users call "the hospital" and pay someone to inject them.

But pressure is mounting from a confluence of political, societal, and economic forces to finally clean up this gulch of horrors for good.

From a task force convened by the mayor to address the city's opioid epidemic, to growing development around the site, and an increase in rail traffic, a flash point seems to have been reached.

"This neighborhood has been struggling for decades, and when my administration came into office last year, we said this has to stop," said Mayor Kenney. "It's not an easy issue, it's going to take many years and a ton of money, so that may have been why it hasn't been addressed in the past – but that's not an excuse."

Quetcy Lozada, chief of staff for city Councilwoman Maria Quiñones-Sánchez, who represents the district that's home to the gulch, said every city department has been put on notice.

"The state has also been brought to the table. No one will get a pass," Lozada said. "There's no deniability now."

“A lot of people die down here, and they're letting them die because they don't want the cops to come, so they push the bodies to the side.”
Ana Correa, 53

From her worn mattress beneath the graffiti-covered underbelly of the B Street Bridge, Ana Correa can see across the Conrail tracks to the opposite embankment, where almost daily addicts overdose and tumble down the detritus-covered slope like rag dolls.

Correa's own addiction began when her mother introduced her to heroin at 16, she said.

"I be scared sometimes," said Correa, 53, as she scratched at the injection wound on her neck. "A lot of people die down here, and they're letting them die because they don't want the cops to come, so they push the bodies to the side."

The tracks have been the site of rampant drug use for at least 20 years, according to law enforcement, government, and social service officials.

The underworld has endured partly because of the geography. At a distance, the sunken tracks and open space along them are invisible from street level. Nearby residents rarely traverse the area, which means the dystopian landscape is seen only from the overpass bridges. 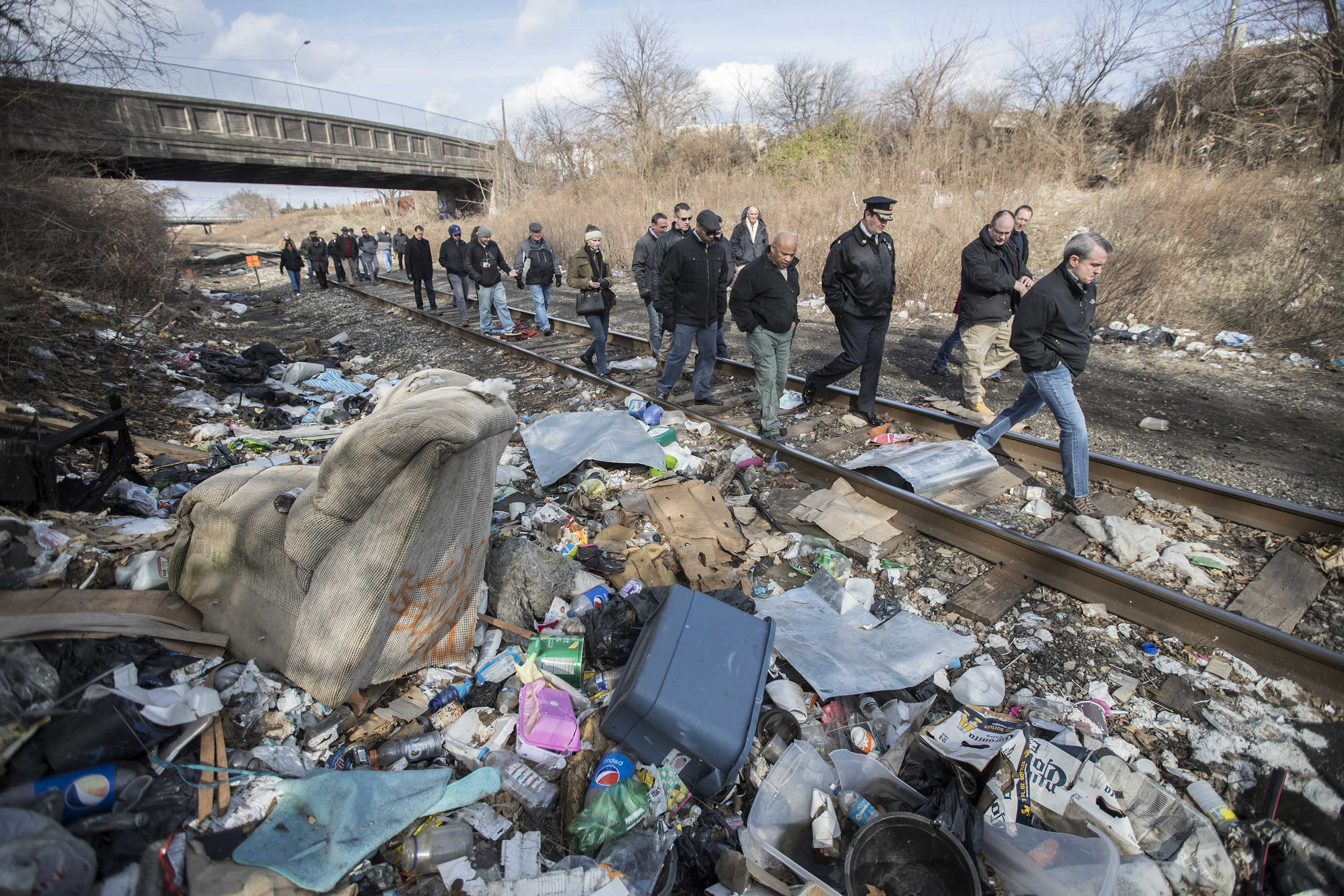 MICHAEL BRYANT / Staff Photographer
A group of reporters, police, and politicians walk along the trash-strewn tracks.

"The police department and the community there have basically said 'They're out of sight. They're concentrated in one area, so it's easy to manage,' " Lozada said. "Little did they know the epidemic would get so out of control and this would become the epicenter."

Special agent-in-charge of the Philadelphia office of the Drug Enforcement Agency, Gary Tuggle, said he'd thought he'd seen it all - until he saw the gulch.

"I questioned whether I was still in the U.S.," he said. "It's like a third-world country." 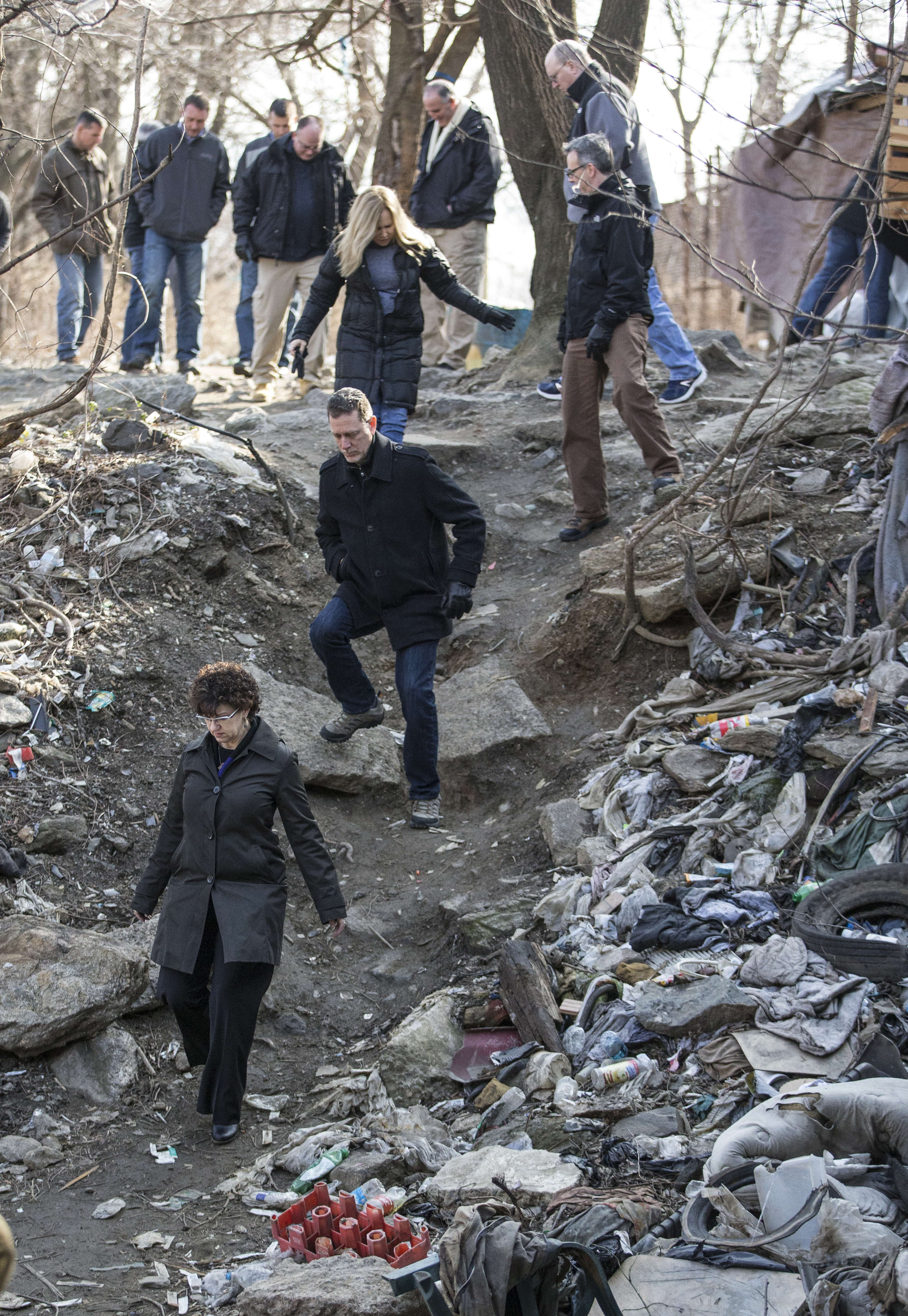 MICHAEL BRYANT / Staff Photographer
Gail Scott, a University of the Sciences professor and a member of the Mayor’s Opioid Drug Task Force, leads the way down a muddy path surrounded by trash and used needles in El Campamento.

Historically, heroin addiction was generational, with family and older friends introducing new users to the drug, Tuggle said. But prescription opioids have introduced a whole new - and growing - set of users to addiction and heroin, making it the worst narcotics epidemic Tuggle said he's ever seen.

The local impact can be measured by the more than 900 fatal overdoses recorded last year in Philadelphia. Those included 35 victims in just five days in December.

Those deaths have added a greater impetus to existing pressures on the city and Conrail to clean up the area.

Traffic on the rails has surged in recent years as petrochemicals from the Marcellus Shale move from the center of the state to ports on the Delaware River.

And Kensington, long regarded as among the most blighted neighborhoods in the city, is seeing the glimmers of a renaissance. Speculators are snapping up empty lots, vacant buildings, and tax-delinquent rowhouses.

"There's condos popping up everywhere," said Elvis Rosado of Prevention Point, a nonprofit agency that provides needle-exchange and other health services to addicts. "Those are hard to sell with addicts in the front doors."

The city has been in negotiations with Conrail since Dec. 2 to forge an agreement to clean up the mess along the embankments.

The city wants the area sealed with prison-grade fencing, which would run five blocks from Second and Indiana Streets south to the B Street Bridge, according to city Managing Director Michael DiBerardinis.

Discussions call for bulldozing the encampments, collecting the estimated 500,000 used syringes, removing trees that provide cover for the addicts, and installing surveillance cameras so police can monitor the area. The cost: between $3 and $5 million. The city wants Conrail to pay the bill.

Conrail, which has staged several cleanups over the past two decades, said in a statement that it had been "overwhelmed by the degree and nature of this endemic community problem that has migrated onto our property." The rail company said it was seeking solutions to the problem "so it does not continue to reoccur."

"These are Philadelphians, both those living in the camps and the neighborhood around it, and we have to help them - it's our job," Mayor Kenney said. "And Conrail needs to live up to their responsibility on their land as well."

The last cleanup was six months ago, but its effects were short-lived, said Maria Gonzalez, president of the Hispanic Association of Contractors and Enterprises (HACE), which develops houses in the area.

"It's a dumping nightmare," she said.

According to DeBerardinis, the city removes between 30 and 42 tons of trash and debris from the area alongside the tracks, every month.

"You have this pit and it's all this craziness," said DiBerardinis. "As long as it can all hide and reside in the dark - away from treatment, services, and policing - it will continue to fester. We want to bring it all up to the surface and deal with it."

Bulldozing the encampments and resettling the addicted residents is only the first step, he said. "Changing the landscape" may require carving out the slope so that it becomes a sudden drop-off, untraversable to the addicts.

Capt. Michael Cram, commander of the 25th District where the drug haven is located, said the rail line was a magnet for addicts from throughout the Philadelphia region. "It's not locals buying," he said, referring to neighborhood residents. "... It's always outsiders."

Law-enforcement officers said they've encountered addicts along the tracks from as far south as Florida and as far west as California. All agree that just arresting addicts won't solve the problem. 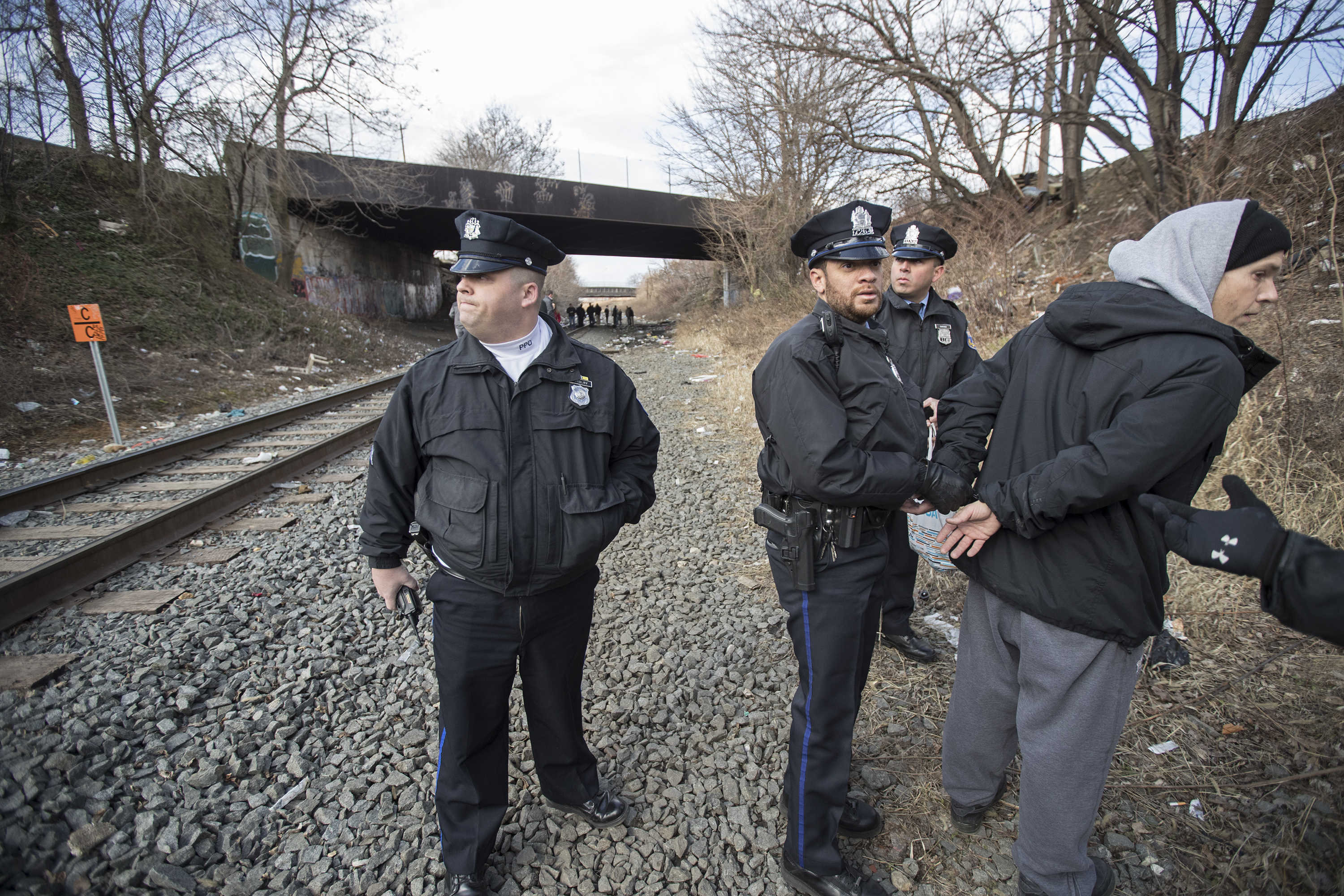 "There aren't enough jail cells in the country to arrest your way out," Tuggle said.

And while City Councilman Allan Domb wants all the addicts in the area put into treatment, that may not be possible.

Roland Lamb, deputy commissioner for planning and innovation in the city's Department of Behavioral Health and Intellectual Disability Services, estimated there were about 30,000 heroin addicts in the city, or double the treatment slots available.

But even if the city had capacity to treat all of the addicted here, consent remains a hurdle. Government officials cannot force addicts into recovery against their will, and for many heroin users, the addiction becomes the strongest force in their world, surpassing even the bond between mother and child.

Correa has 10 children and six grandchildren. She cries when she talks of how her grandchildren used to love to visit her when she lived with her boyfriend, who died last year. Yet Correa remains under the bridge and in the gulch injecting heroin.

Her biggest fear is not death, she said, but a normal life.

"I've never been well or happy for a long period of time so when I do feel like I'm doing well I'm afraid because it's not a feeling I'm familiar with and it scares me," Correa said. "When I do become clean, I've got to become a new person because I've been this other person for so long."

Lamb believes the path to helping addicts like Correa is to meet them where they are, engage them, invite them to safe spaces, and offer opportunities for treatment. And if they're not ready, offer opportunities to fulfill their basic needs, like housing or food, until they are ready.

"There are people out here that can sell cars to people that don't want them," Lamb said. "We should invest the same resources in people like that to do street outreach."

Strengthening and funding community groups in the area like Prevention Point that offer services for addicts is key too, Lamb said.