When John A. Fry arrived at Franklin and Marshall College in Lancaster 14 years ago, as a candidate for college president, the first thing he saw was a shuttered linoleum manufacturing plant that loomed across the street.

"If I get this job, that goes," he thought, wincing at the hulking mass of brick buildings and smokestacks that rose behind the college fitness center. "You couldn't think about a worse way to introduce a campus."

The notion was far from whimsical, considering it came from Fry, who was fresh off his pivotal role at the University of Pennsylvania in revitalizing its West Philadelphia neighborhood.

As Franklin and Marshall's new president, he wasted no time launching a $75 million redevelopment project, one of the largest in Lancaster's history. It involved demolishing the factory and moving half of a railroad yard on the college's rim to a site less than a mile away, freeing dozens of acres for development.

A landfill that occupied the new rail site had to be relocated, which meant excavating and redisposing of 104,000 tons of trash. 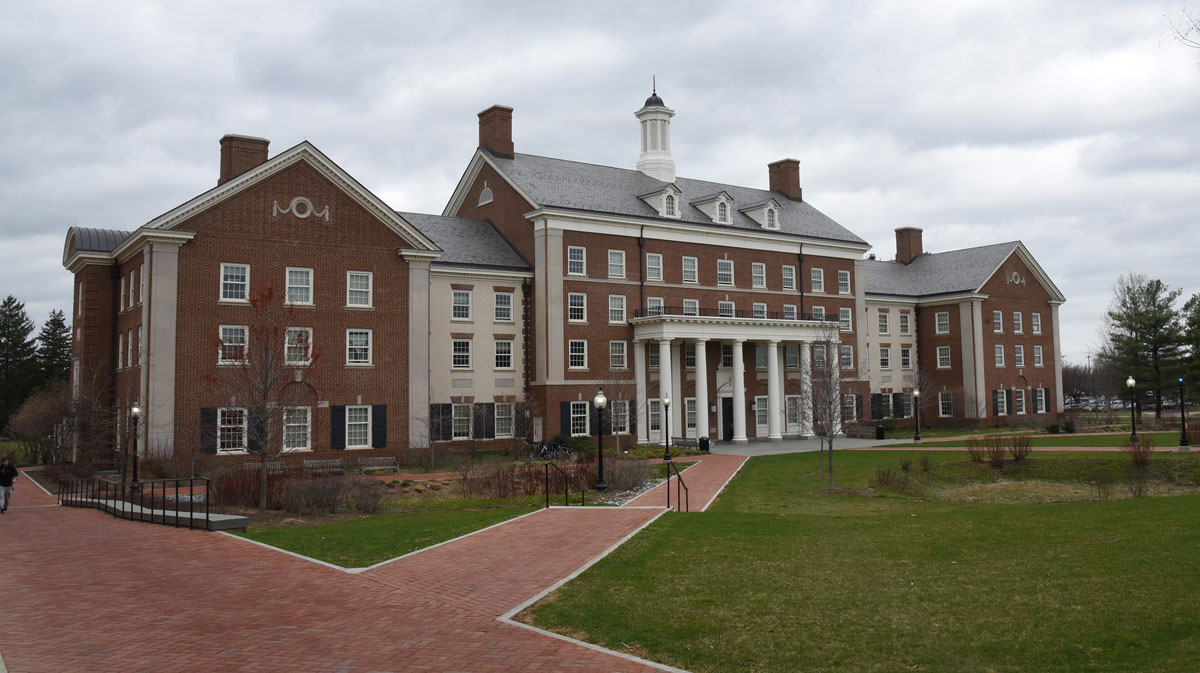 Only recently, nearly six years after Fry left F&M to become president of Drexel University, have some of the final pieces of what is known as the Northwest Gateway Project been completed.

Now, Fry has plans to transform Drexel's neighborhood. In March, the university, along with developer Brandywine Realty, announced a decades-long, $3.5 billion project to turn parking lots and industrial buildings between its campus and 30th Street Station into a dense neighborhood of businesses, retailers, parks, and residential towers, to be called Schuylkill Yards.

The university and Brandywine also are working with Amtrak and SEPTA to study the possibility of partially capping 30th Street Station's rail yard, which would provide land for more development.

In Lancaster, Fry partnered with the local hospital, the largest employer in the city, which at the time was headed by a former Penn colleague. The college and Lancaster General each agreed to put $12 million into the project. In return, both got viable land for development.

Fry went to then-Gov. Ed Rendell to help secure public funding for the project. He also got help from the solid waste management authority and city government, all from his perch as president of a selective liberal arts college deep in Amish country.

"It was a lion's roar driving confidence in the city," said Lisa Riggs, president of the Economic Development Co. of Lancaster County. "It wouldn't have happened without F&M's leadership and knowledge, and John's persuasiveness. That magnitude of redevelopment was beyond what most people could have thought was possible at that time."

CLEM MURRAY / Staff Photographer
This block of stores with student housing above is one of John Fry's projects in Lancaster.

On a recent spring day, a runner circled a path around large green fields that replaced the factory. Students played lacrosse on a field that was once a scrap yard piled with cars. A microbrewery, yoga studio, bridal salon, and cafe with student residences overhead fill a block that used to be a parking lot. Then there's the development that followed as the property around F&M improved, including an arts hotel in a former tobacco warehouse.

“You can’t be daunted by something that looks improbable and in fact turned out to be transformational.”
John A. Fry

The college is seeking city approvals to build a $16 million football stadium on the former factory site, with plans to eventually relocate its other athletic fields there.

The hospital, recently purchased by Penn, is exploring placing a behavioral health facility on property it acquired by swapping its piece of the former factory land for another parcel. That proposal would be subject to a series of approvals.

"It's happening. It's actually happening," Fry said recently as he shared slides of the project in his conference room at Drexel. "It took 13 years, but it actually happened. So you can't be daunted by something that looks improbable and in fact turned out to be transformational." 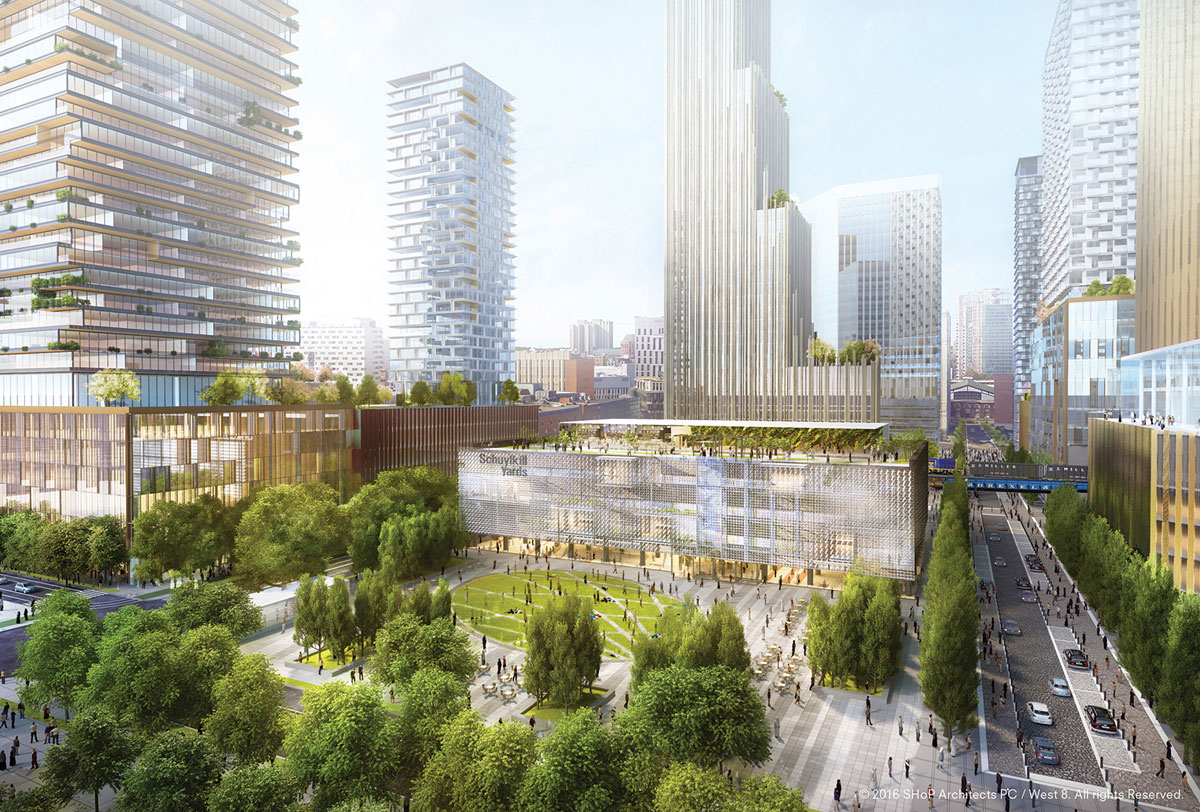 SHOP Architects
Fry announced plans to convert an area between Drexel's campus and 30th Street Station into a dense neighborhood of businesses, retailers, parks, and residential towers, to be called Schuylkill Yards.

It's not typical work for a college president.

But Fry, 55, defies the model. He does not have a doctoral degree, has never been a dean or provost, and has not conducted research. With a bachelor's from Lafayette College and an M.B.A. from New York University's Stern School of Business, Fry got his start in the auditing division of what is now KPMG, and then moved to Coopers & Lybrand to run a Philadelphia consulting operation dealing with colleges.

His biggest client was Penn, whose then-president, Judith Rodin, was so impressed she hired him. From 1995 to 2002, he helped bring a movie theater and grocer to the Penn neighborhood, create the public Penn Alexander School, and launch the University City District, fostering relationships among colleges, retailers, and residents.

His work caught the attention of F&M, which was looking for a president who, among other priorities, could repair its aging facilities.

"For a city our size, it would have been really challenging to raise the dollars," he said. "It could have sat there for decades."

Armstrong World Industries had closed the century-old plant. The complex on 46 acres consisted of dozens of structures, big and small, even its own fire station.

The demolition yielded 407,000 tons of debris, enough to fill four aircraft carriers, said Keith Orris, who led the project for Fry and has since come to Drexel to oversee large development. Bricks were salvaged and sent to New Orleans to help rebuild after Hurricane Katrina, he said.

The plant was replaced with green fields, utilities, streets, sidewalks, and lighting. One of the nation's largest "brownfield" reclamation projects, it was featured on the History Channel's Boneyard series.

Next, Orris suggested moving the Norfolk Southern rail yard that ran between Armstrong and the college.

"I remember thinking, this guy is smoking dope," Fry recalled. 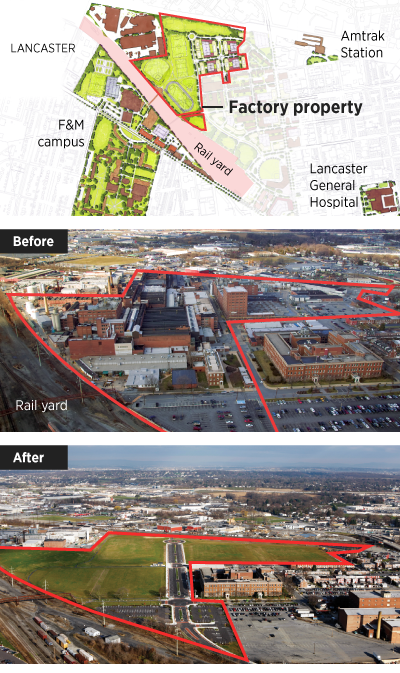 Fry headed a redevelopment plan that involved demolishing a factory, moving a railroad yard, and excavating a landfill.
See more >>

But Fry knew the vice president of corporate affairs at Norfolk Southern, H. Craig Lewis. He and Orris floated the proposal: Relocate the rail yard just outside the city.

The railroad was game. But first, the landfill had to be moved.

The Lancaster Solid Waste Management Authority, said CEO James Warner, was happy to sell the landfill. The trash was trucked to the authority's current landfill.

"We did quite well," he said, "because we got $3.75 million in disposal fees." The plan seemed like a go, except for one problem. The U.S. Postal Service owned a small triangular tract adjacent to the site. The space was needed.

"Keith was like, we're totally cooked because we can't get the post office to return our calls," Fry said. 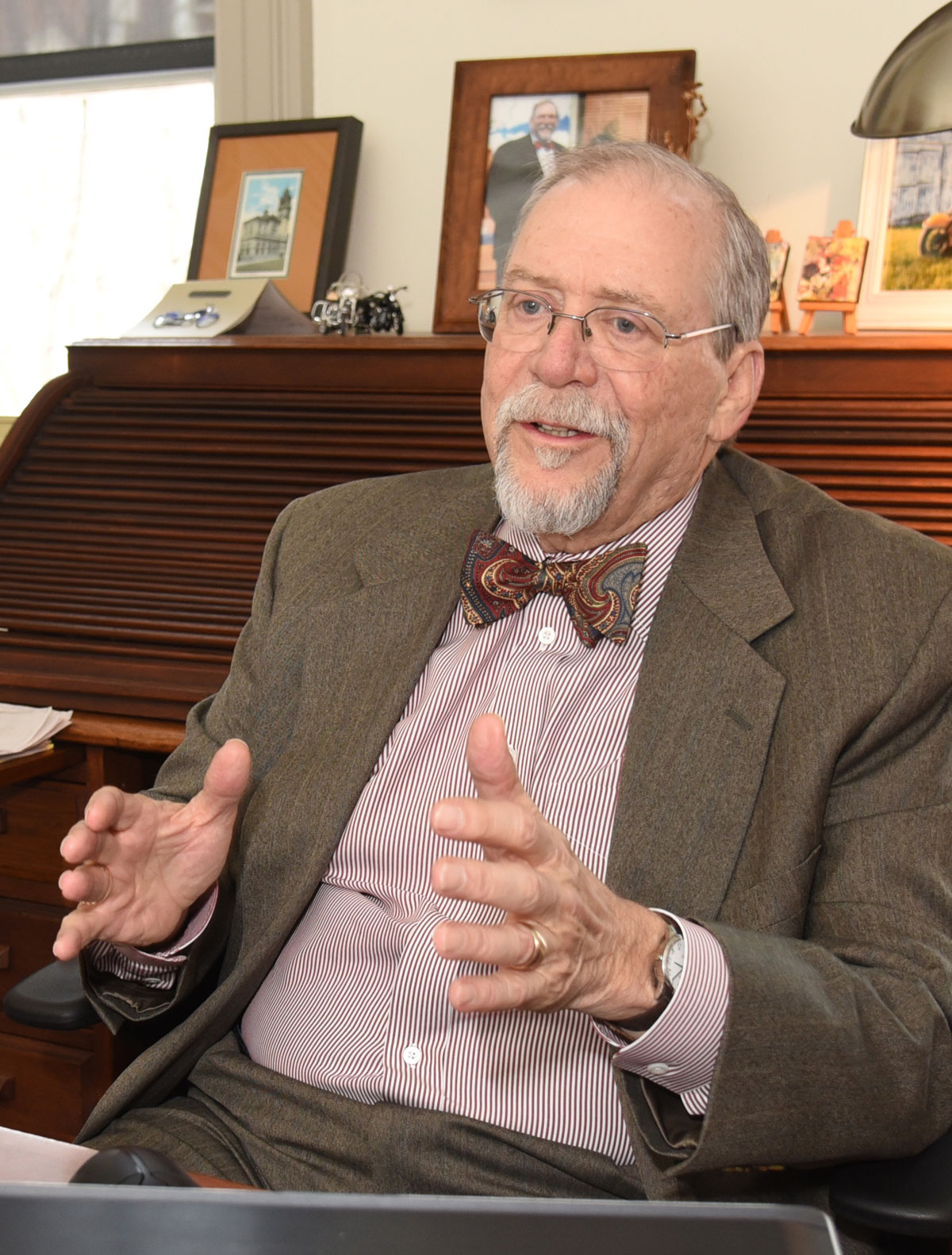 "The fate of this hung so many times with one person," Fry said.

"Each piece kind of got people excited about the next piece," he said.

Not everybody was happy. Opposition formed over concern about potential environmental hazards and noise near the new rail yard. The college and hospital slowed the project by a year to address concerns, Orris said.

"It was almost like a political campaign," Fry said. "We were going door to door."

"We found six 55-gallon drums of some chemical materials that were easily packed and moved," Orris said.

To deal with noise, they erected a berm.

Bob Stover, 79, who lives near the new rail yard, said he appreciates all the college and hospital did for the city, but notices more noise and vibrations.

"They did a great job at our expense," said Stover, a retired meat company sales manager.

Third-term Mayor Rick Gray said he's heard no complaints since the project was finished. Of Fry and Orris, he said: "We want them both back and we want them now."

Fry did plenty of development on campus, too.

He built a $50 million life science and philosophy building and renovated a center for business, government and public policy. He recruited pollster G. Terry Madonna, formerly of Millersville University, to work there. 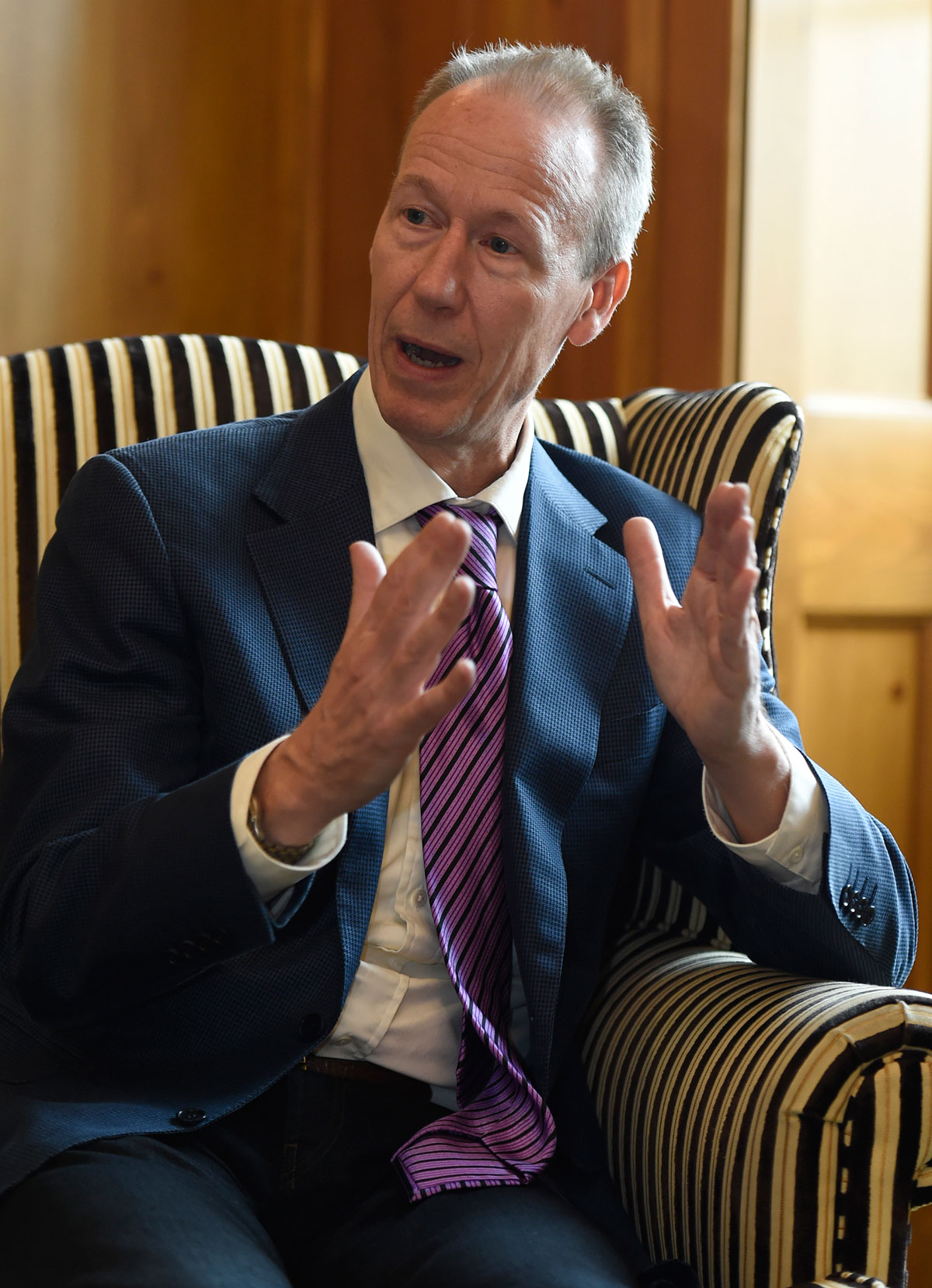 Fry also brought more students back on campus with new student residences, called College Houses. Students live in the five buildings, but also attend seminars there and mingle in small settings with prominent speakers. Faculty serve as house dons and interact with students daily, with upperclassmen helping as mentors.

Four houses were existing buildings. Fry built the fifth, New College House, an 180-student residence with a brick exterior fronted by white columns and a soft pine interior. Students can socialize in a large living area with a fireplace.

"The idea is to bring together the life of the classroom and residential life," said Dean Hammer, a government professor and house don.

He was skeptical at first. Then he saw students chatting with Nina Totenberg of NPR.

"They were talking to her in their living room," he said.

Fry, Hammer said, "raised our expectations for ourselves."

The college houses were part of an effort by Fry to create "third spaces" for informal learning and socializing, where faculty and students could continue conversations started in class. 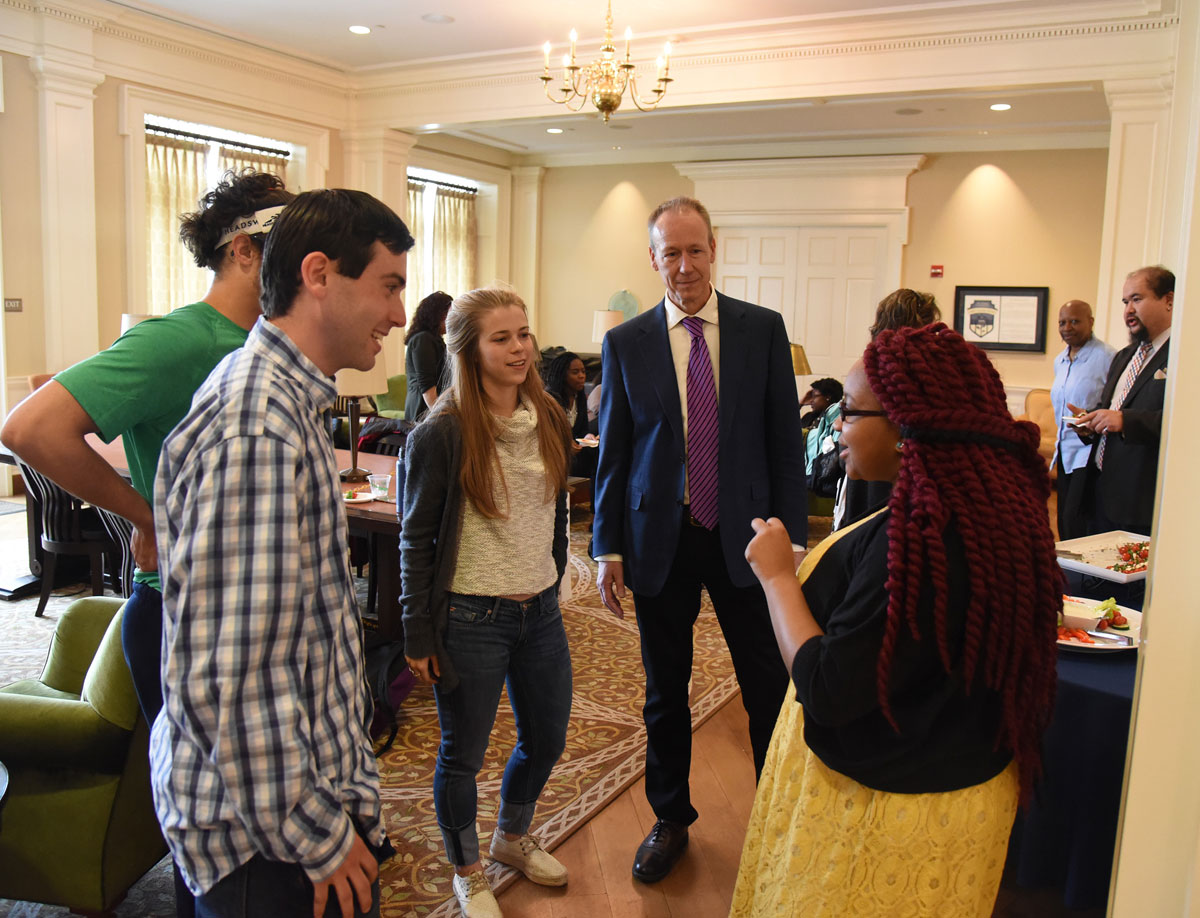 "I'm here way more than I should be," Natalie Salinardo, 19, a sophomore from Cranford, N.J., said one recent afternoon at a writers house Fry started. The Spanish major said she writes poetry there.

"Someday they will invent the college president hall of fame, and when they do, John Fry will be one of the first inductees for his work in helping prepare Franklin and Marshall College for the 21st century and doing it in a way that strengthens Lancaster, too," said F&M president Daniel R. Porterfield.

Applications are up, Porterfield said, and students come from a wider area. He attributed part of that to Fry's work on the campus.

He's a Rhodes scholar and English professor who got his doctorate at the City University of New York and came to F&M from Georgetown University, his alma mater.

He doubled need-based financial aid and recruited talented low-income and minority students who might have been overlooked in the past. He's also emphasized fund-raising for the endowment, said Washburn, the incoming trustee chair. 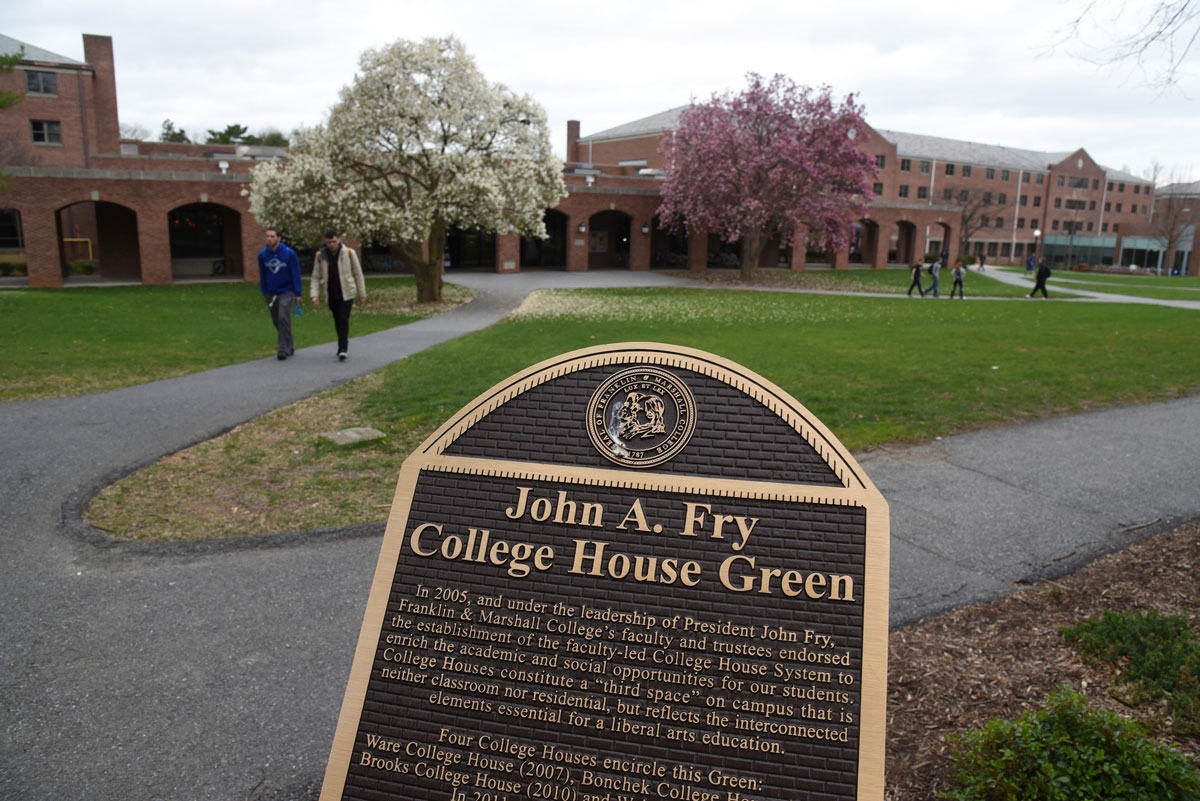 CLEM MURRAY / Staff Photographer
A plaque on the Franklin & Marshall's House Green honors Fry for his vision of the faculty-led college-house system of dorms.

"Because of the work John Fry did, we're able to have Dan Porterfield focus where he is," said the F&M alum and higher education consultant. Both, she said, "were the right match for the right time."

F&M isn't pursuing all the development in the initial plan, such as a master gateway to campus. "That's just not on my radar," Washburn said.

The college will contemplate options for its old stadium. For now, students will use the track around it, she said. When its other athletic fields are moved near the new stadium, the college will consider how to reuse that land.

"We don't know what the other options are for that space yet," she said.

But there are options.

Back to story >>
How Fry transformed Lancaster
1. He helped demolish a factory.
The new president collaborated to tear down an eyesore factory across the street from campus... 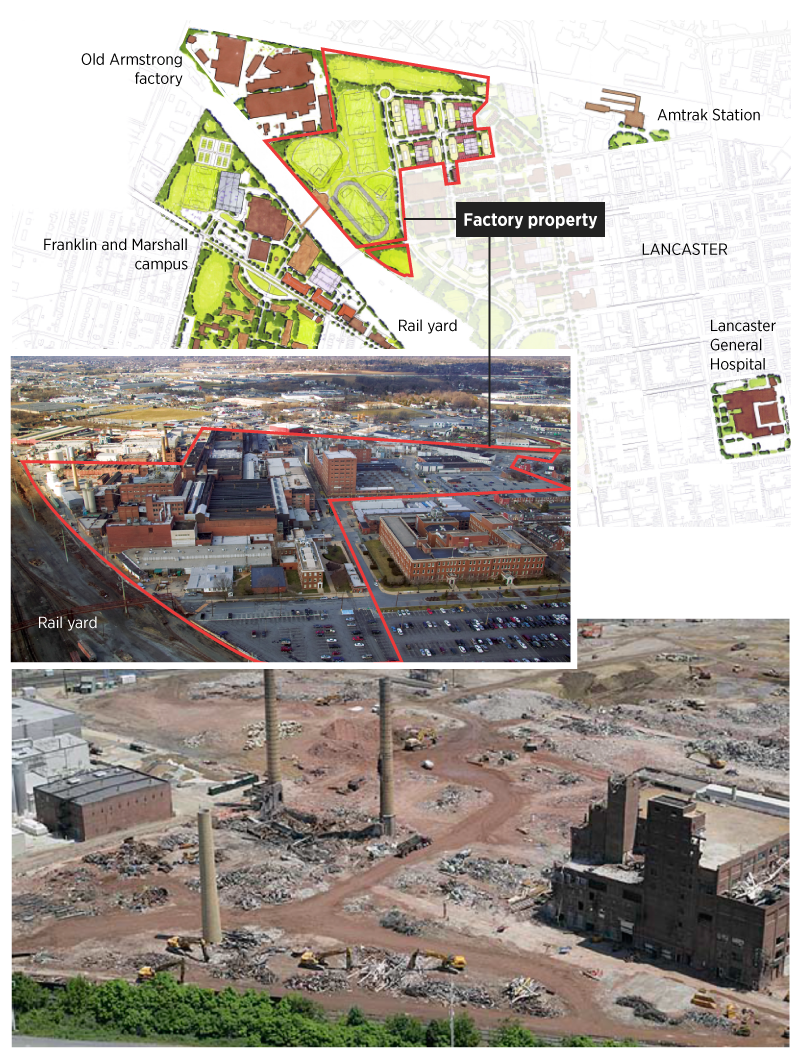 ...and replace the buildings with large green fields. 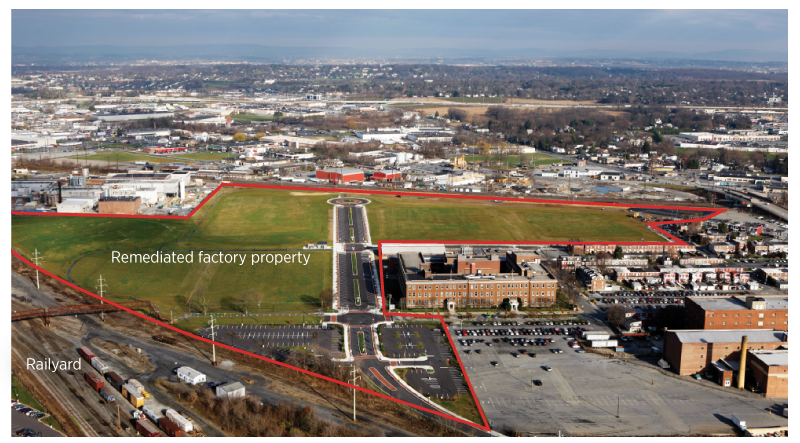 2. He pushed to move a landfill.
A blemish of a rail yard sat between the edge of campus and the new green fields. The plan was to move the rail yard to a location a half-mile away from campus to free acreage for new development, but...
...a landfill occupied the new rail site. The landfill had to be excavated and 104,000 tons of trash were re-disposed of. 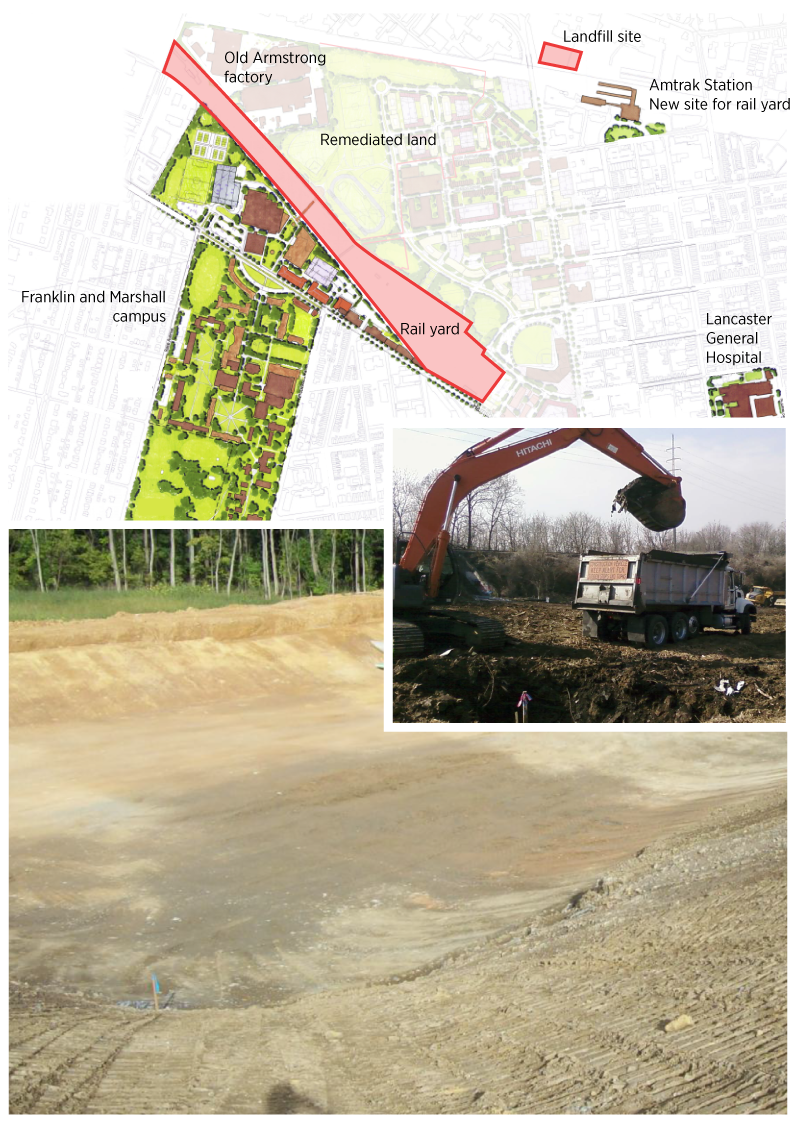 3. The new location of the rail yard was refurbished.
The existing yard needed a new vehicular bridge, berm and remodeling. 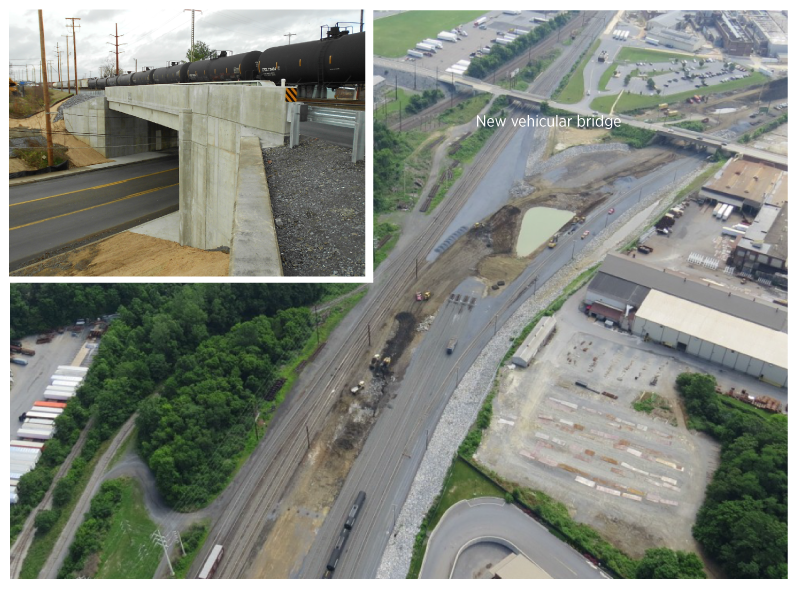 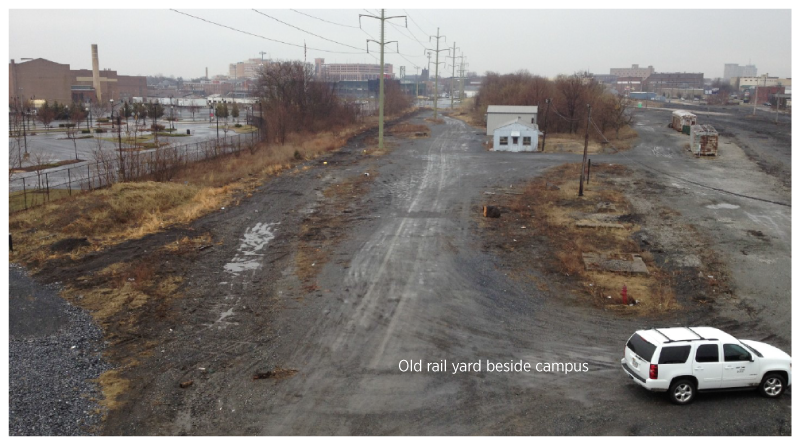 The area was cleared and freshened up, and power lines were relocated. 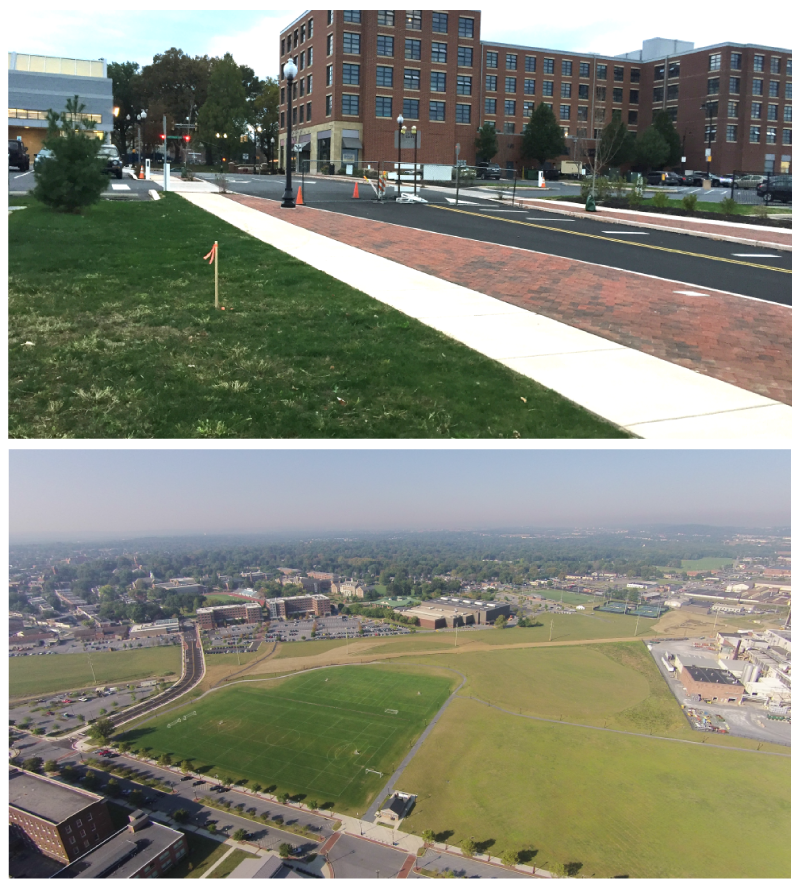