Skip to content
A crumbling block
drowning in debt
CLEM MURRAY / Staff Photographer
On this particular block of Argyle, 19 of the 50 properties are delinquent.
A Kensington block typifies the city’s blight and poverty as survivors struggle to make it better.
Barbara Laker / Daily News Staff Writer lakerb@phillynews.com, 215-854-5933

IF EVERY BLOCK IS A story, then the 3300 block of Argyle Street is a novel.

It's a sultry Friday afternoon at the corner of Westmoreland and Argyle in Kensington, where innocence and chaos collide.

Adept drug dealers revel in a fruitful day as fidgety buyers form a line for dope. Across the street, three small girls thrash around and giggle in the blow-up wading pool perched on the cracked sidewalk where weeds peep through.

It took decades for Argyle Street to sink into a Philadelphia archetype of blight, poverty, neglect, delinquency, crime and despair. 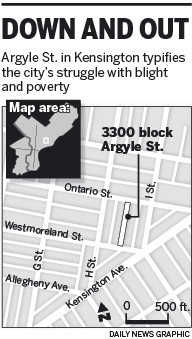 Today, this one block, including two houses at the corner of East Ontario, is more than a quarter of a million dollars in debt to the city for unpaid taxes and water bills.

There are hundreds of blocks like this in the city's poorest sections, where nearby factories shuttered long ago.

The grand total of tax delinquency in Philadelphia, including interest and penalties, is $507 million. The Revenue Department does not include more than $135 million, however, because either the property is in bankruptcy, there is a payment agreement or the delinquency is under appeal.

On this particular block of Argyle, 19 of the 50 properties are delinquent. Collectively, they owe $221,743 in real estate taxes and penalties, and nearly $40,000 in unpaid water bills.

CLEM MURRAY / Staff Photographer
Edwin Gonzalez, 23, cleared a vacant lot next to his girlfriend's house to spruce up the street and provide a spot for the car he is restoring.

Six of the delinquent houses are boarded. Four others have been demolished.

Several more have dead people listed as the last recorded owners. Some have living owners who apparently just walked away, never to return.

Other homeowners give the properties to relatives without legally transferring the title, stalling any sale.

On Sunday night, Aug. 23, just before 9 p.m., a dark colored sedan drove up H Street, a few hundred feet from Argyle. Emmanuel Cintron, 22, walked toward the car, police said, when someone inside fired several gun shots into his chest before driving off. Cintron was pronounced dead the next morning.

Less than four hours later, Alexis Rosado, 36, was shot in the head on Kensington Avenue, a few hundred feet west of Argyle. He died less than an hour later. 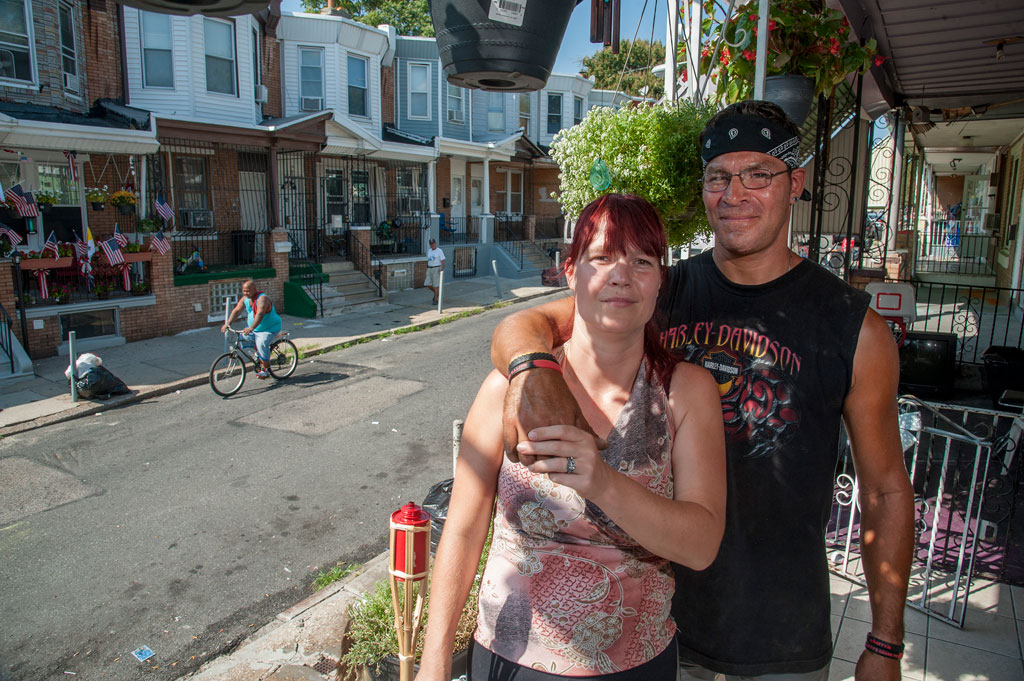 CLEM MURRAY / Staff Photographer
Jorge Ortiz, with his wife, Annett, would like to use his construction skills to fix up a house.

Jorge Ortiz, 44, who lives on this block of Argyle with his wife, Annett, and their five children, says he politely asks the drug dealers to stay away from his home.

"There are children here," he tells them. "And I just don't want to be associated with this in any way. I don't want any part of it."

The Ortiz house stands out on Argyle. Colorful potted plants and hanging baskets brighten the porch adorned with an American and German flag on each end. Their home adds a sense of peace in a neighborhood where police sirens and the rumbling Kensington Avenue El are white noise.

Despite the drug dealing, Ortiz often filled a wading pool for his kids on sweltering summer afternoons, constantly on alert for danger. 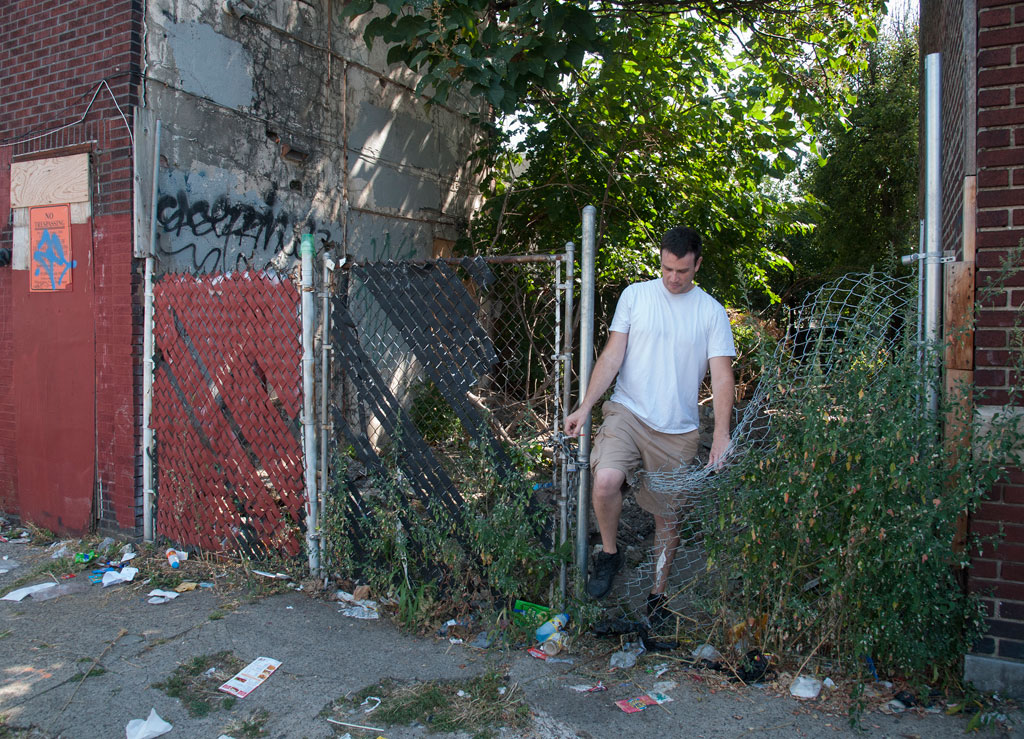 Ortiz, who works as a carpenter, said he doesn't call the police about the drug dealing, fearing retaliation.

"I don't want to be the one who calls and then get harassed. I just can't take that chance," he said. "I just want them to stay away from us."

He has, however, called the city about a dilapidated house two houses away. The house is partially boarded but the collapsing roof has gaping holes.

Over time, people have ripped some of the boards off to use the shell of a house as a drug den, Ortiz said.

The owner of the house died in June 2011, according to city records. Like so many houses in poor neighborhoods, it sat abandoned because no relatives claimed it.

The two-story rowhouse went up for sheriff's sale in August 2012, but there were no bids after several sale attempts, according to Mark McDonald, a spokesman for Mayor Nutter.

The city's Department of Licenses and Inspections cleaned and sealed the property in April 2014 following numerous violations, according to records provided by L&I Commissioner Carlton Williams.

"It just sits there getting worse every day," said Annett Ortiz. "The city has done nothing and we feel like we're just forgotten."

"They're good people down here. Real good people," her husband added. "But we need help."

"Unfortunately there are many blocks like this," said Councilwoman Maria Quinones-Sanchez who represents the 7th District, including this block of Argyle.

"I think there are too many blocks like Argyle that need us to think more proactively as a government," she said. "And we have to do an entire block. We can't piecemeal it. It doesn't work."

The city has no comprehensive plan to bring blocks like this back, Sanchez said. In the meantime, it drains city resources. 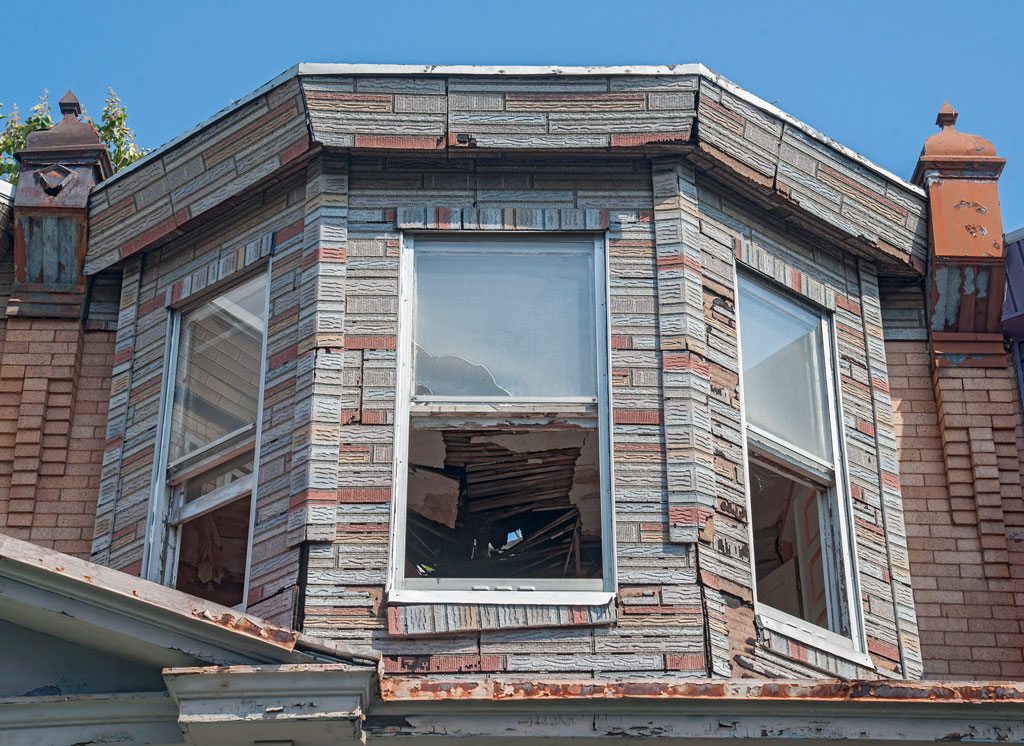 CLEM MURRAY / Staff Photographer
A hole in the roof visible through the windows of one house.

"If the owner is deceased or if the property has a tangled title with no clear legal owner, it is very unlikely that the violations will be remediated," he said.

On this block alone, L&I has sealed eight houses, including two multiple times, and one more on Ontario Street at the corner of Argyle.

In 2011, L&I created a vacant property unit to speed the city's blight-fighting efforts, Williams said. The department has more money to expand the unit, but facing 25,000 vacant properties, the problem is overwhelming. 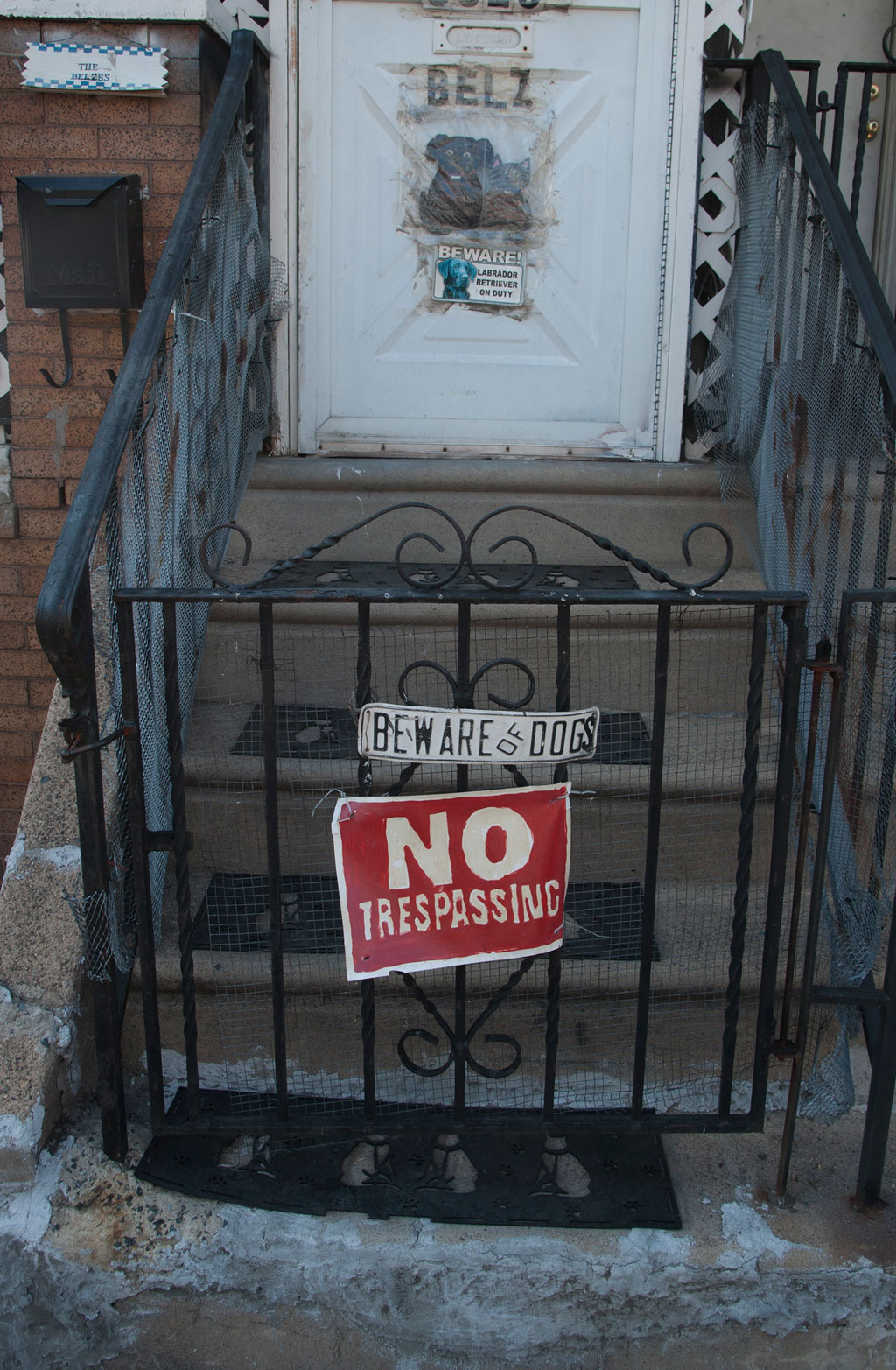 CLEM MURRAY / Staff Photographer
One boarded house sold in April for $5,100. Two more are on track for sheriff sale.

Sanchez said the Philadelphia Land Bank, which is not yet fully operational, would help.

Sanchez, who authored the legislation, said it would streamline the system to clear title and transfer properties to responsible owners. Land banks can acquire tax delinquent properties, like those on Argyle, and package them for sale.

It would particularly help Argyle Street, she said, because some houses have fallen into such disrepair that they are not worth more than $5,000 or so.

One boarded house sold in April for $5,100. Two more are on track for sheriff sale.

Few investors are lured to Argyle because the cost of renovation would exceed the market value.

And neighbors typically don't have the money to rehabilitate them. Some 52 percent of people in this census tract live below the poverty level, with the median household income at $23,608.

Jorge Ortiz has construction skills and would like to buy the half-boarded house near him.

A few other groups and investors are trying to save Argyle and other nearby blocks.

Jamie Moffett, a documentary filmmaker who has a studio steps from Argyle Street, has made it his mission. His dad grew up a few blocks away and his cousin is the letter carrier.

So far, he has bought six properties in the neighborhood. He recently went to a sheriff's sale to buy a house on Westmoreland in partnership with Shift Capital, which is redeveloping houses and abandoned factories in Kensington. The sale price: $9,100.

"The goal is to scoop up as many as we can to cut down the [crime and blight] because this is 'The Wire,' " Moffett said, referring to the acclaimed gritty TV drama about drugs and crime.

“The goal is to scoop up as many as we can to cut down the [crime and blight] because this is ‘The Wire,’ ”
Jamie Moffett

While Shift Capital will renovate the house on Westmoreland, Moffett plans to put a surveillance camera outside to help prevent crime.

"You can't invest in a neighborhood where people don't feel safe," he said.

He recently learned how fine-tuned the drug dealing operation is when he paid a neighborhood guy to pick up trash swirling on the sidewalk.

The man returned, telling Moffett that the drug dealers told him not to sweep the streets. They stashed their drugs in discarded potato chip bags and the like so cops can't bust them for having dope in their pockets.

"How crazy is that?" Moffett asked.

The street is particularly lucrative for the drug trade because it's close to the Kensington Avenue El and I-95, giving drug users an easy in and out.

"In other neighborhoods, this would not be allowed — the open drug dealing, the debt owed, the houses falling down," he said.

"But this is Harrowgate in Kensington. Here, it's not the exception. It's the norm."

Alexander Lopez, a 37-year-old father of two, knew he had to step up when he saw his son reach down to pick up a used needle near an abandoned lot on Argyle.

So Lopez and his relatives have made a haven out of what were two adjacent filthy, trash-filled lots where addicts shot up heroin and tossed the needles on the ground.

"It was the worst. I mean the worst. It was dirty for years. It's gotta stop. Somebody's gotta do it," he said. 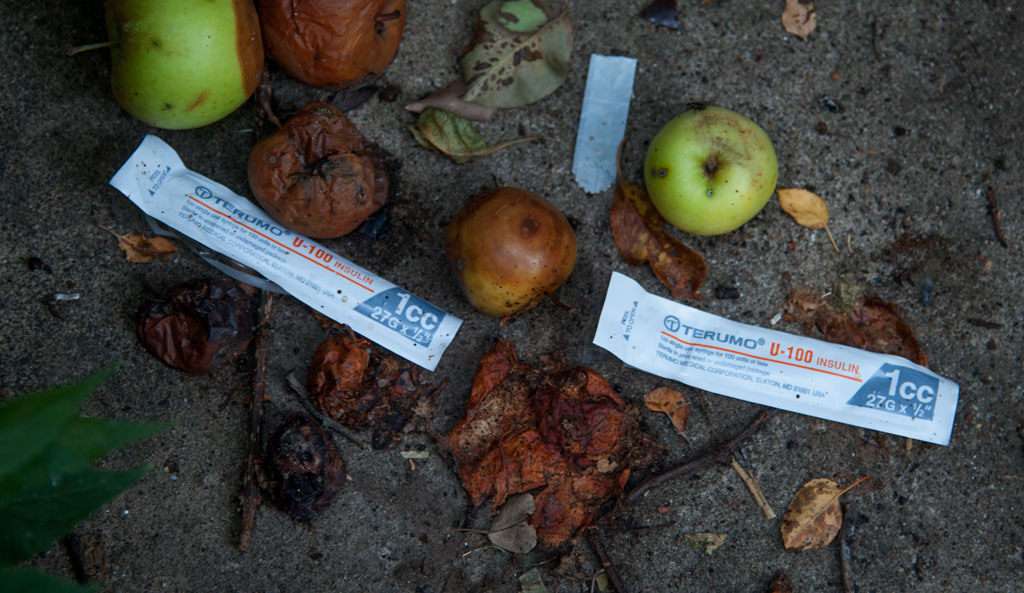 CLEM MURRAY / Staff Photographer
Alexander Lopez worked to clean up two lots after he saw his son reach down to pick up a used needle.

They replaced weeds and trash with bikes, scooters and toys. They put up swings, a slide, a basketball net and a blow-up pool.

They have a grill, tables and chairs, all under an awning to shield them from the sun.

Then Lopez and his relatives installed a wood fence to secure the lots and make it safe for other neighborhood kids to play.

"One of my friends gave me some of the wood and I spent about another $50 on more," he said.

CLEM MURRAY / Staff Photographer
Alexander Lopez and his relatives clean up a vacant lot. They replaced weeds and trash with bikes, scooters and toys. They put up swings, a slide, a basketball net and a blow-up pool.

Lopez and neighbors say the people who owned the two properties died.

Raymond and Margaretta Davis bought one of them in 1973 for $7,800, according to city records.

Taxes were delinquent beginning in 1997.

L&I cited the property several times and demolished it in October 2008.

Caroline and James Keenan bought the adjacent house in 1948 for $1, according to city records.

Caroline Keenan, who was born in 1917, died in 1994. It is unclear what happened to James, but public records have the house on Argyle as his last known address.

Taxes are delinquent since 1988.

Lopez said he has gone to City Hall to inquire about the lots, but said he was told to wait six months while the title history is investigated and cleared.

"I just wanted my kids to be safe and be able to play," said Lopez, who has lived on the block nine years.

"It's what every kid deserves. 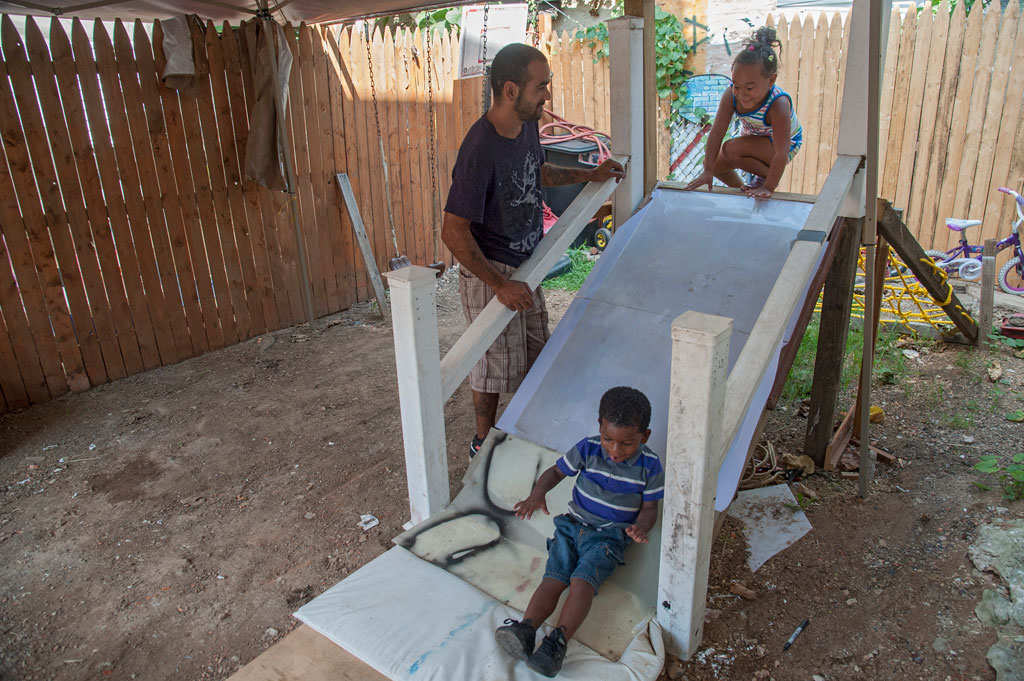