They are three local guys from Villanova University and a young woman from Queens, and they will transform the Philadelphia skyscape in a remarkable way.

They are structural engineers, the brilliant folks who make certain the architect's vision stands upright. 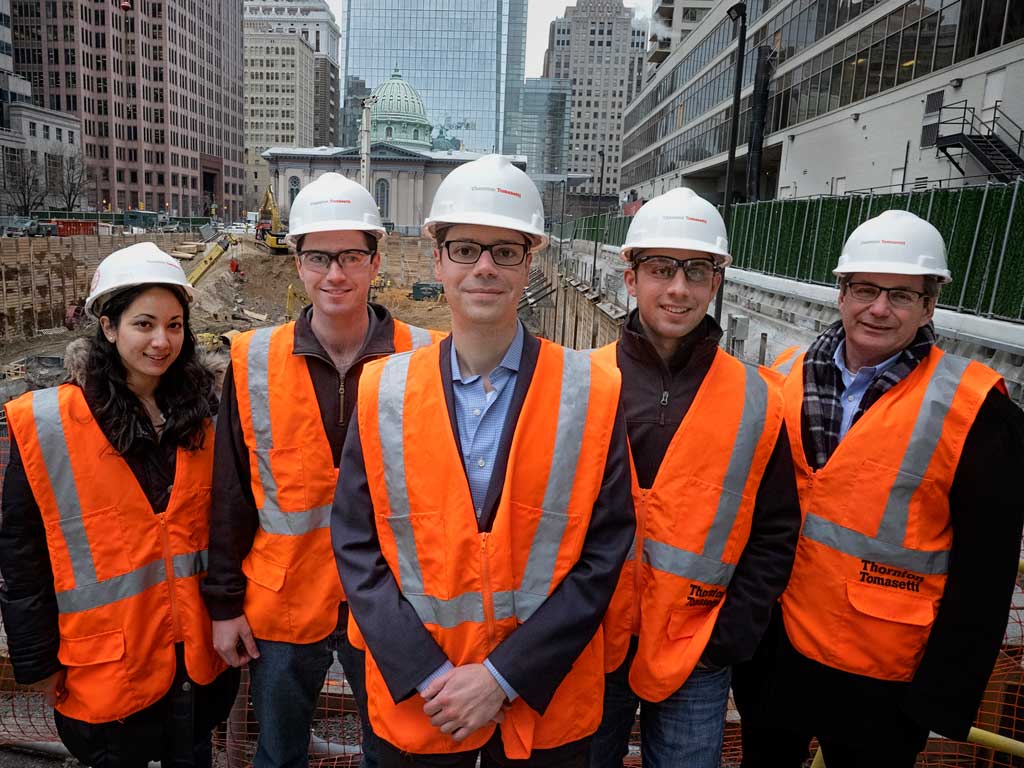 They design the skeletal framework of high-rises - the lattice of girders, columns, and building cores that enable skyscrapers to stand tall through high winds and even earthquakes.

Many times, they do their work hundreds or thousands of miles from a construction site, seeing their craftsmanship only in photos or on web cams.

But for this Philadelphia project, these four engineers have front-row seats to watch their dazzling creation from their 17th-floor office on the 1700 block of Market Street - a 5-iron away from where cable-TV and media giant Comcast Corp. is constructing a "vertical stacked campus" that will be the tallest building in Philadelphia.

The engineers' task over the last 18 months has been mind-numbing and exacting, producing with the help of computer modeling an elaborate manual of drawings, notes, and deadlines to bring to reality this 1,121-foot, 59-story tower. It will be a career-maker, or, at the very minimum, a career highlight for Andrew Blasetti, 32, Angela Heinze, also 32, Lou Ross, 26, and Stephen Kane, 25.

They are the four engineers Thornton Tomasetti, one of the world's leading structural firms, has assigned to the tower's construction. Youthful and confident, realistic and highly articulate, they like to draw, and perhaps thought of being architects, but instead had talents for math and putting things together.

With the new tower, they fell into what could be a project of a lifetime. And this task isn't just huge, it's challenging architecturally and, as a consequence, very tricky structurally.

The new tower will be owned in a partnership of Comcast and Liberty Property Trust. The partnership hired Thornton Tomasetti Inc. to ensure the building hews to the architect's creative vision without blowing the construction budget. The firm also has to make sure the building functions as the owner desires - as a hub for new thinking. The building, to be called the Comcast Innovation and Technology Center, will cost $1.2 billion and is expected to open in early 2018. 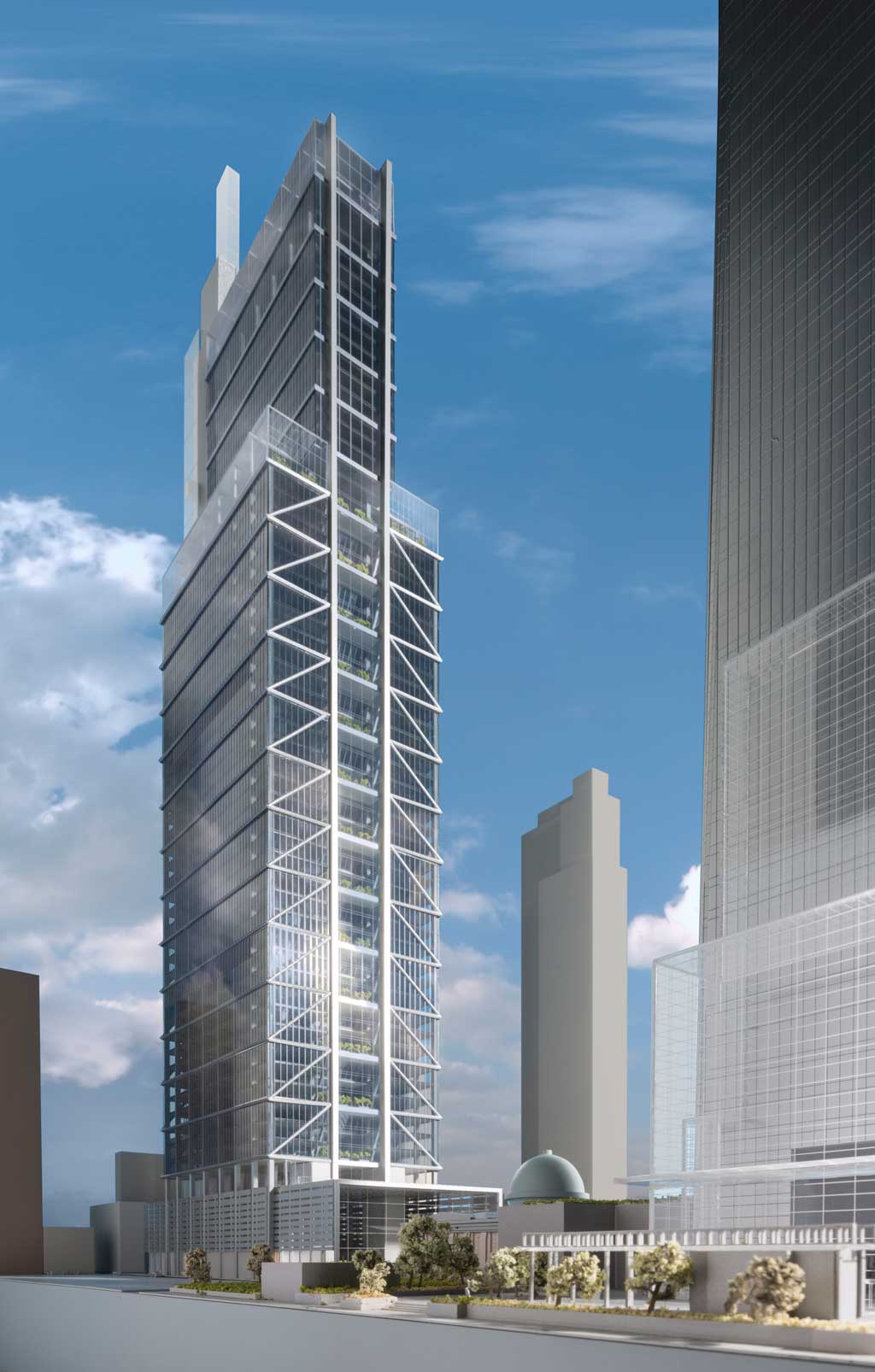 Three-story steel diagonal braces stiffen the east face of the structure away from the core.

"I didn't think something this big would come along this soon [in my career], but it did," said Kane, a basketball referee for a youth league in his off time who was raised in Springfield Township, Delaware County. "Obviously, I like it because it will be the tallest building in the city. If it was up to me, I'd have it twice as tall."

Ross, who was raised in Medford and still lives there, believes the tower makes a civic statement. "We are always in the shadow of New York here in Philadelphia," he said. "It's neat that it's being designed here in Philly for Philly."

One of the great fears for structural engineers is working on a project for months or years and then the owner cancels because of a lack of financing or a new idea comes along. This hasn't been the case for the new Comcast tower on the 1800 block of Arch Street. Since Comcast announced the project in January with the architect Foster + Partners, it's been nonstop action.

"They're not hesitating," Ross said of Comcast, "and that's cool." At a New York firm, Heinze designed U.S. embassies for the Hague in the Netherlands and N'Djamena, the capital of Chad, but never got to see them. Now she can walk two blocks and see construction. "The scale of the project is beyond what I've dealt with before, and it's changing the skyline," said Heinze, who grew up in Queens.

The team's leader, Blasetti, was raised in Horsham and graduated from Hatboro-Horsham High School in 2000. He got his first exposure to engineering in high school, drafting machine components for a local manufacturing company. "I like being able to visualize and see how things are put together," he said.

Blasetti thought about being an architect but believed he was more technical than artistic.

“We are always in the shadow of New York here in Philadelphia. It's neat that it's being designed here in Philly for Philly.”
Lou Ross, Engineer

The greatest despair of his structural engineering career was the three years he helped design a slender high-rise for Doha, Qatar - "a beautiful building," he said.

"I was personally crushed," Blasetti said of the day he learned the project had been canceled.

He moved from Thornton Tomasetti's Newark, N.J., office for the Comcast tower in mid-2013.

Now he's meeting every two weeks for four or five hours in the Comcast Center or some other downtown office with about 30 of the contractors involved in the giant project. On Thursday, they talked about Dec. 13, when the contractor will pour the 10-foot-thick, 14-million-pound concrete foundation mat for the building.

Many tall U.S. buildings constructed after World War II had center cores: boxlike concrete structures running up the center of high-rises for stability. These cores function like tree trunks to support the buildings: They're thicker at the bottom and thinner at the top.

The center cores also provide space for elevators, bathrooms, and mechanical equipment. They are convenient, easy to engineer, and economic.

Floor space in center-core skyscrapers could be carved into offices near elevators and leased to tenants - like cutting a loaf of bread into tidy slices, said one developer.

Play
Click to play an animation of the new buidling.

To give Comcast what it wants, Foster + Partners shifted the core to the 19th Street side of the tower's footprint - what structural engineers call an "eccentric" or "off-center" core. That opened the office floors on the eastern side of the tower. 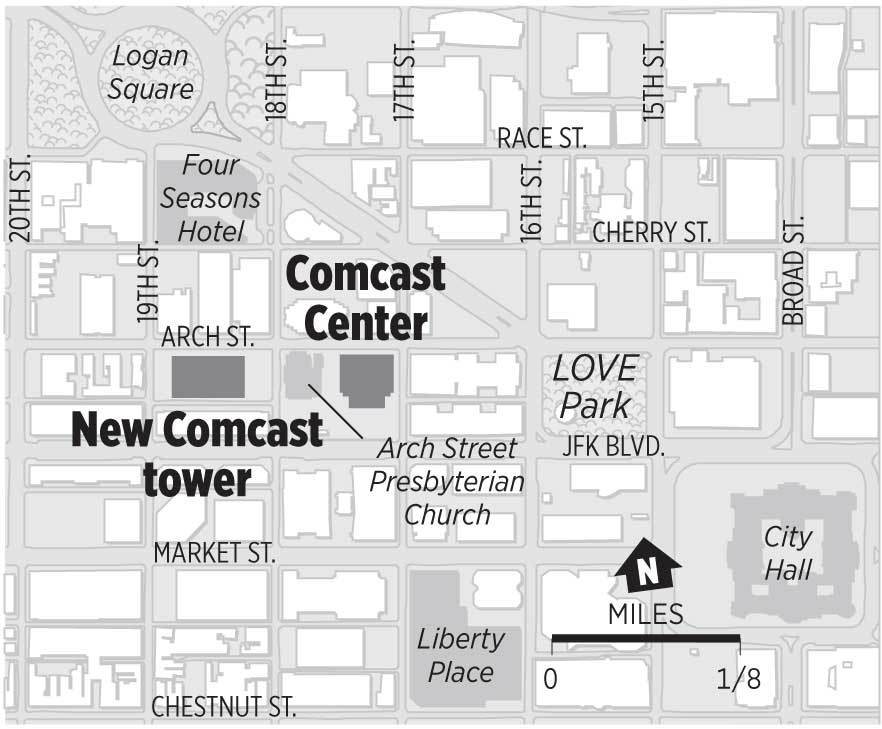 Sunlight was important in the architect's vision. One solid off-center core would block the view through the entire building. The split core, though, will allow someone on the tower's 19th Street side to look straight through the block-long building to the dome of the Arch Street Presbyterian Church at 18th and Arch Streets, and to the Comcast Center, and retain "a visual connection to the city," Blasetti said.

Mark Coggin, Thornton Tomasetti's Philadelphia office leader and Blasetti's boss, said the architects told him at the first design meeting in 2013 in Philadelphia, "We want you to win a structural engineering award for this building. They wouldn't make it easy for us."

Thornton Tomasetti designed its first high-rise, the 38-story Tampa City Center, in the late 1970s. With that success, it got calls from all over the United States, and now the world, for skyscrapers. 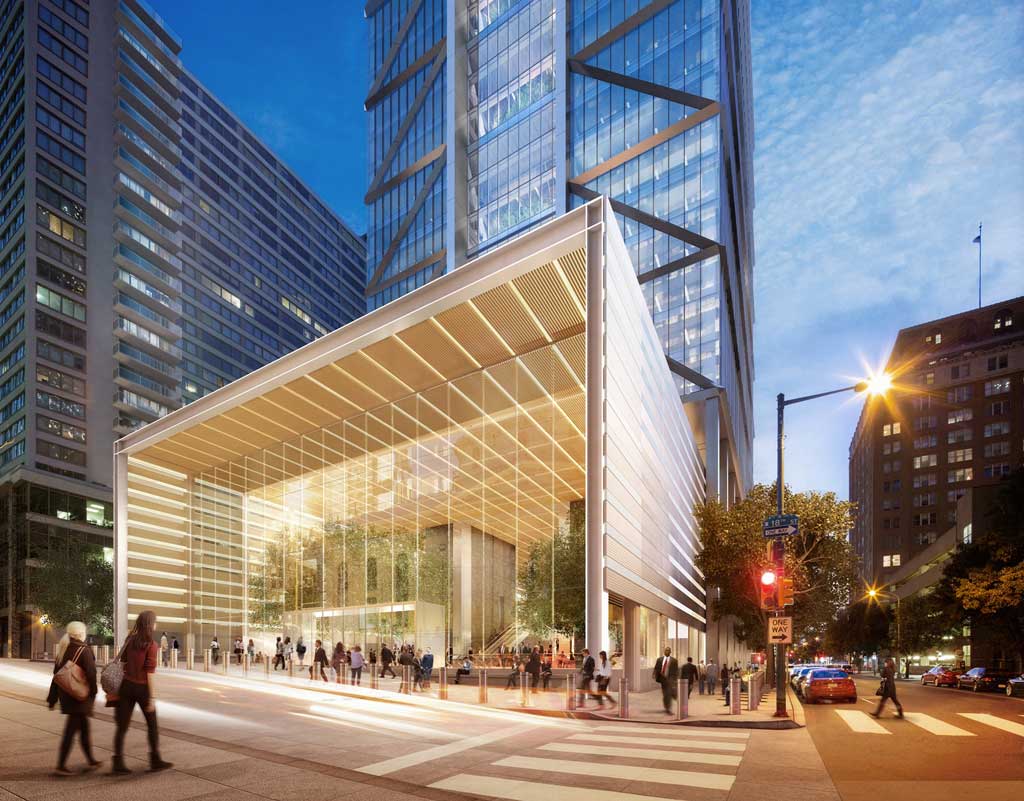 A view of one of the main entrances to the new Comcast tower at 18th and Arch Streets. The other main entrance will be on 19th Street.

Among its current projects is the Kingdom Tower in Jeddah, Saudi Arabia, which will be one kilometer tall, or 3,281 feet, with 167 floors and 57 elevators, according to the Council on Tall Buildings and Urban Habitat.

"Andrew has at his disposal, a phone call away, the guy who designed the Petronas Towers in Malaysia or the New York Times Building," said Thornton Tomasetti spokesman James Kent.

Blasetti says the structural engineer's task can be complicated by competing interests.

"We always get pulled in three directions," he said. "The architect wants the look, the owner wants to keep costs down, and the contractor wants it simple and for it to go up fast. It's a race to the top."

Professor David W. Dinehart, chair of Villanova's Department of Civil and Environmental Engineering who was one of Blasetti's instructors, said the most important task for structural engineers is to determine the direction of the load path in skyscrapers. How does weight on the tower's floors find its path downward from floor to beam to column to core wall to foundation and, finally, to bedrock?

One would think finding this path would be trickiest on the uppermost floors. But that's not so. Even though distance for the weight to travel to bedrock is longer at the top floors, the weight has a more direct path through the lattice of beams and columns.

"The lower podium levels, as with most large projects, have more complicated load paths due to the number of steps in the floor plate. It's very common with retail/lobby spaces to have numerous elevation changes across the floor," Blasetti said in an e-mail conversation, noting later that escalators also complicate load-path calculations.

"The challenge is tracking this load to each of the surrounding columns to figure out what percentage goes where. This is a very important step, as it affects the column and foundation designs.

Earthquakes aren't a threat in Philadelphia. But strong wind gusts can slam into city skyscrapers. This is a special concern for the new Comcast tower, which will be topped by a 222-room Four Seasons Hotel. 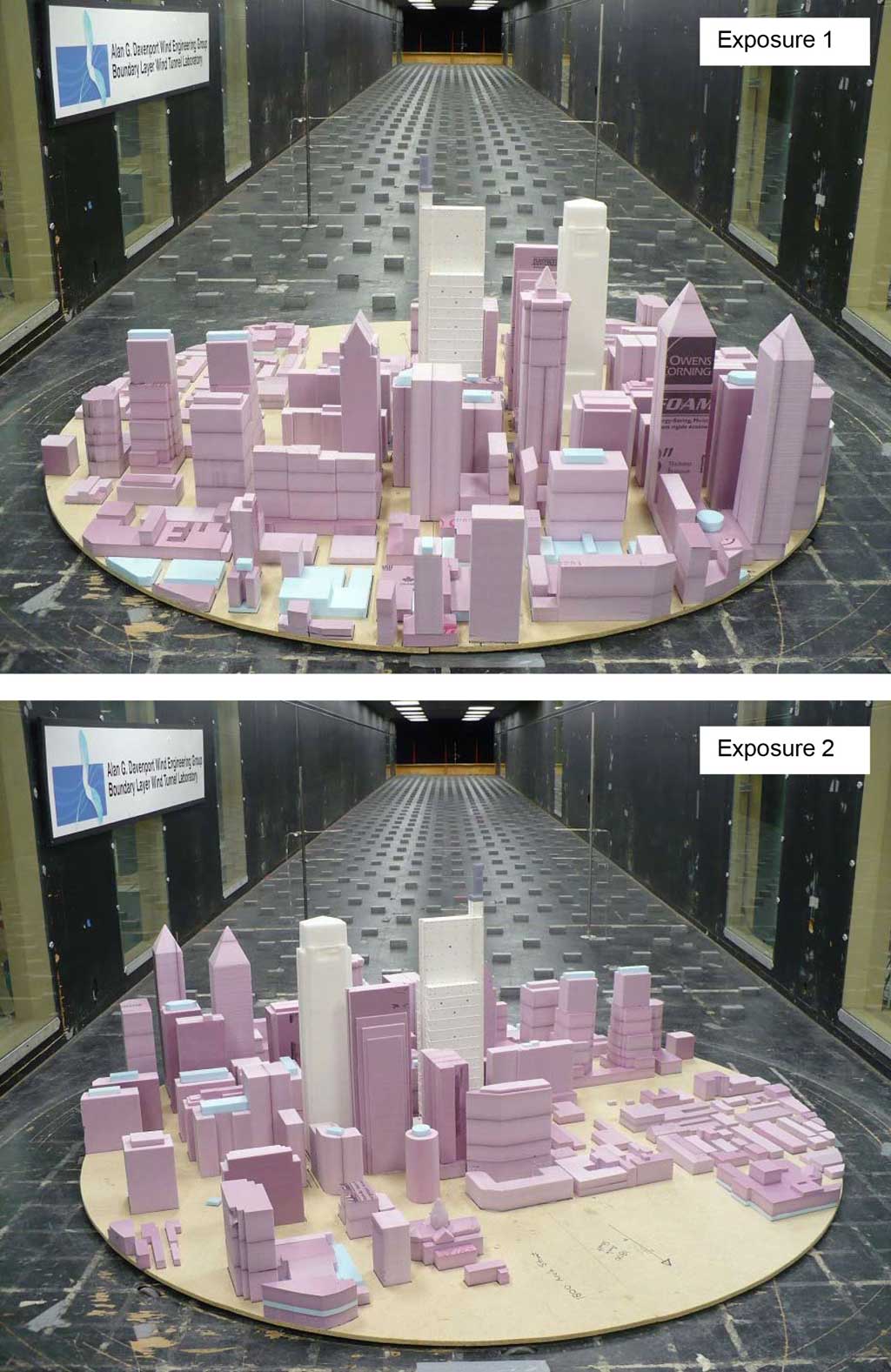 A scale model of Philadelphia that helped engineers determine the effect high winds might have on the tower and helped them design it.

A wind-tunnel test on a scale model of Philadelphia by the Alan G. Davenport Wind Engineering Group at the University of Western Ontario confirmed suspicions of the structural engineers that a strong northeast or southeast wind could whip around the Comcast Center and slam the new tower's top floors.

To stiffen those floors, Blasetti's team designed "chevron braces" on the hotel complex's east and west sides. The engineering team buried the A-shaped steel braces between hotel rooms so they are not seen or noticed. They are stacked on the east and west sides of the hotel, one brace on top of another.

"It had to be tighter at the top of the building than it did in the offices so that people don't have discomfort," Coggin said.

Blasetti's team also allocated space for five "tuned sloshing dampers" in the ceiling of the 57th floor, below the hotel sky lobby at the top of the building. The five dampers - holding 125,000 gallons of water - will act as a countervailing force when the tower sways in the wind. They will be hidden in compartments in the ceiling. "The architectural design for this building is very tight - there is no dead space," Blasetti said.

Thornton Tomasetti designed the structural skeletons for the tallest existing buildings in Philadelphia - One Liberty Place and the Comcast Center. But the firm staffed those projects out of its Newark and New York offices.

As part of its talks with Liberty Property Trust for Comcast's new tech center, Thornton Tomasetti said it would do its work this time at an expanded Philadelphia office.

“I've been at Villanova for 16 years, and he's probably the best student I have had.”
David W. Dinehart, chair of Villanova's Department of Civil and Environmental Engineering

Kane and Ross graduated in 2012 with master's degrees in engineering from Villanova and were hired in Philadelphia the same year by Thornton Tomasetti. Blasetti graduated with a master's in engineering from Villanova in 2006. Thornton Tomasetti hired him in its Newark office because at the time there were no openings in Philadelphia.

"I've been at Villanova for 16 years, and he's probably the best student I have had," Dinehart said of Blasetti. "He was at the top of his class, in his analytics and work ethic."

With the Doha project and a New York high-rise at the Hudson Yards development under his belt, Blasetti moved to the firm's Philadelphia office for the Comcast project in 2013.

Now he, Kane, and Ross sit next to one another in Thornton Tomasetti's office here, realizing they're part of a historic project and having what they call a friendly rivalry with the engineering grads in the office from Drexel University and the University of Delaware.

Heinze graduated with a master's in engineering from Lehigh University in 2006 and took a job in New York. She moved here this year.

A version of this story appeared in Sunday's edition of The Inquirer.