The art of survival

On and off for two decades, Doug Sanders painted images of the Philadelphia cityscape while living in its harshest recesses, in downtown parks and dank doorways.

He used the chrome rack of his rebuilt bicycle as an easel and found-paper as his canvas. In winter, he kept his watercolor paints liquid by mixing them with vodka, which did not freeze even in code-blue temperatures.

His moody renderings — the Museum of Art, City Hall, the weary faces of those who also called the streets home — would then be displayed on what passed as his gallery: the bushes in Rittenhouse Square, or the storefront security gates beside which Sanders bedded down at night. 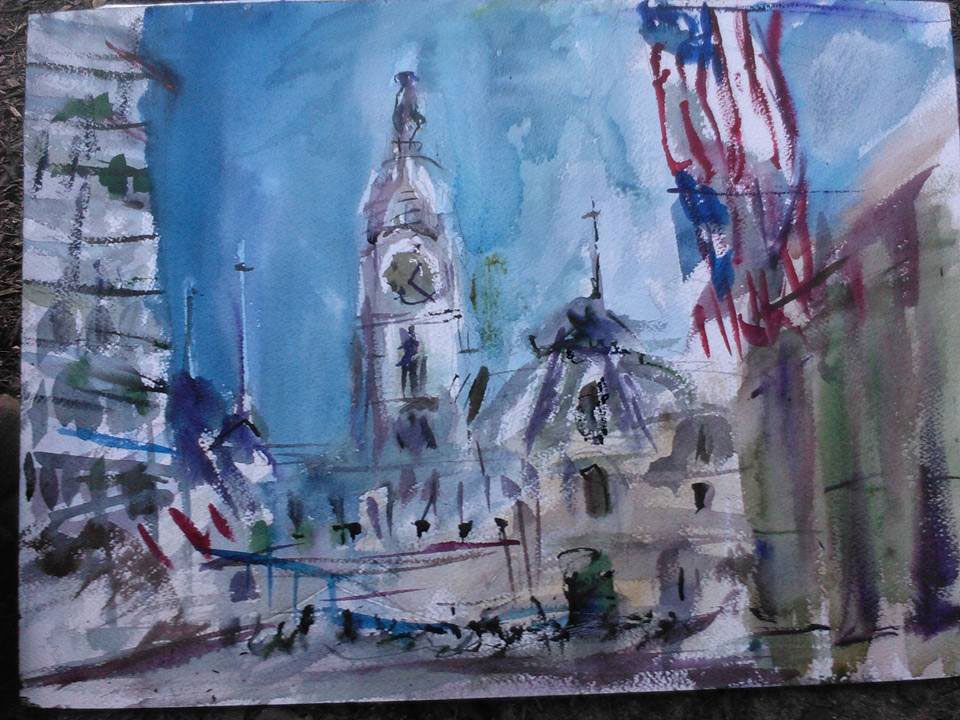 DOUG SANDERS
"I could paint Philadelphia forever," said Sanders, who posted photos of several paintings of City Hall on his Facebook page.

"People would say, 'These are wonderful. Why are you homeless?'" said Sanders. "And I would say, 'I want to know that, too.'"

With gray coursing through his black hair and wrinkles creasing his forehead, Sanders looks no more and no less than his 56 years. He has battled self-admitted demons, depression and addiction, though he says he now is clean. He blames himself for making poor decisions and placing his trust in people unworthy of it.

Yet the talent that first showed itself during a comfortable Main Line upbringing, that matured at the Pennsylvania Academy of the Fine Arts in the 1980s, that gave him entree to the city's creative circles, and put him on a path to early success — that talent has weathered the vicissitudes of a life that went to hell, and the long, still unfolding journey back.

The proof hangs in Gorevin Gallery at Cabrini University in Radnor, where "Painting Without a Home: Selected Watercolors of Doug Sanders" will remain on exhibit through Thursday. In the collection are 34 images, mostly portraits of characters — shelter mates, social workers, counselors — who passed in and out of his world. 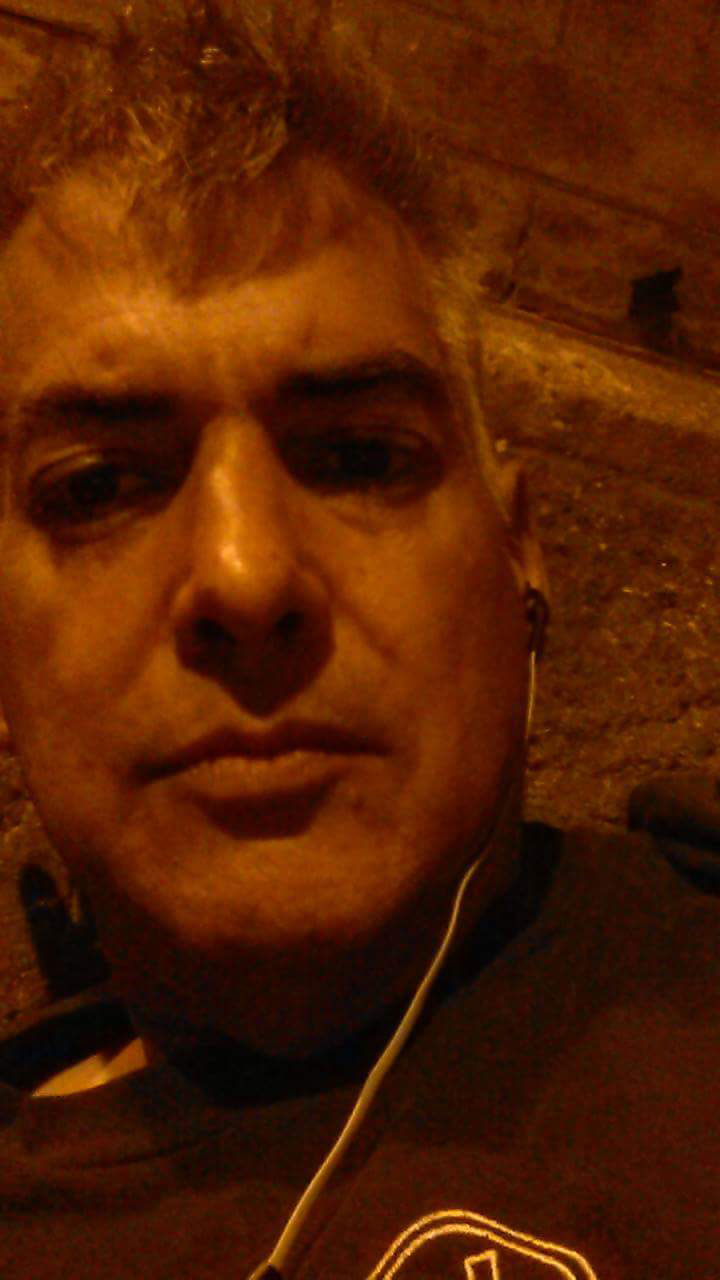 DOUG SANDERS
Sanders has battled self-admitted demons, depression and addiction, though he says he now is clean.

"What pulled my attention is the gritty precision of the work," said Nicholas Jacques, an associate art professor at Cabrini who helped set up the show.

"This is an exhibit about an artist who happens to be experiencing homelessness. It's not about a homeless man who paints."

Sanders was not among the few dozen attending the opening reception Oct. 20. As he explained later, "I didn't want to look anxious. I didn't want to set myself up for a letdown."

It took two weeks to steel himself to go, in the company of an older brother who, like the rest of his family, had long been at a loss how to rescue him.

By then, several pieces had been sold, at $100 each. Offers came in to mount at least two shows elsewhere.

Still, the artist couldn't shake the shadow of self-doubt.

"Nothing is framed," he said of the watercolors surrounding him. "It's like on the street, when I would just put them up. I can't tell if people are going to like it."

Growing up on what he dryly calls "the tough, mean streets of Wayne," Sanders showed a creative bent early on. He drew inspiration from his mother, Diana, an art teacher who crafted a stained-glass chandelier for her home's entryway and made the family Christmas cards.

“I remember him pretty vividly. He had this pretty extraordinary talent, a very gifted painter.”
Jane Golden, director of Mural Arts Philadelphia

His father, Maynard, a railroad account executive, encouraged discipline in his son's pursuit of art and was an ardent fan. He brought home stacks of perforated printer paper, on which the boy spent hours sketching while seated at the living-room coffee table. He often drew comic books. He idolized editorial cartoonists like the Pulitzer Prize winner Herbert Block.

A middle son in a family of four children, he was "introverted and extremely intelligent," said his brother Jeff, who works in cyber security in Denver. "The saying was, if we were playing Trivial Pursuit and Doug walked in, just close it up. It's done. He knew all the answers."

After graduating from Radnor High School in 1979, Sanders enrolled at Philadelphia's Hussian School of Art, now Hussian College, for graphic design and commercial illustration. Several teachers told him he was good enough to apply to the Pennsylvania Academy of the Fine Arts. He did and was accepted in 1982.

At PAFA, he learned from favorite teachers and famed artists Sidney Goodman and Louis B. Sloan, and studied the work of portraitist John Singer Sargent, of whom Sanders said, "If I could be that good, that's who I'd like to be as good as."

He was so well-regarded as to be awarded the prestigious J. Henry Schiedt Memorial Travel Scholarship, which he used to study in California. 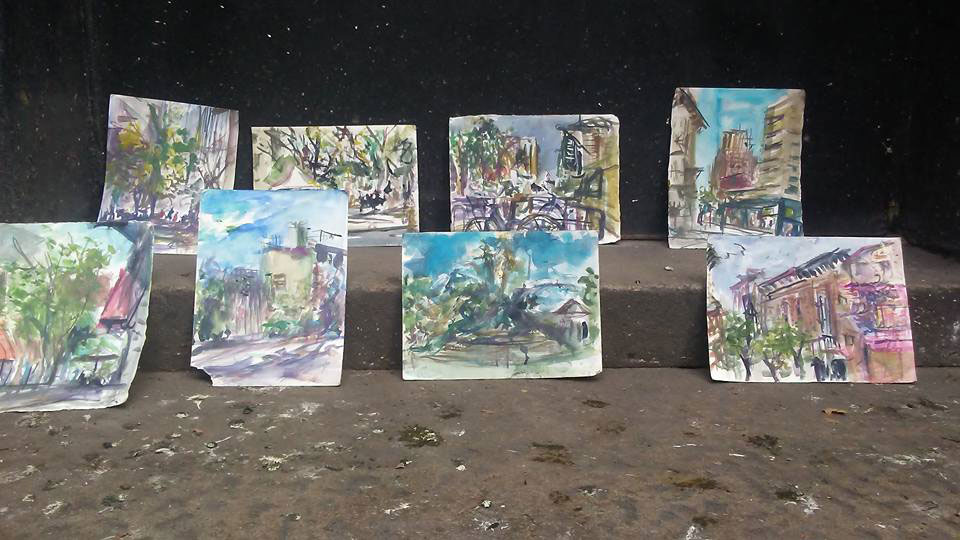 DOUG SANDERS
Sanders would sell his unframed paintings on the street.

In 1986, his PAFA certificate in hand, he set out to make a name for himself.

He created sets for the Curtis Institute of Music's operatic productions, including a 1988 staging of Joseph Haydn's farcical The Apothecary. He also worked for the Anti-Graffiti Network, precursor to Mural Arts Philadelphia, applying his skills to such projects as the towering head-to-toe homage to Julius "Dr. J" Erving, by Los Angeles muralist Kent Twitchell, at 12th Street and Ridge Avenue.

When Philadelphia mural painting was in its nascence in the late 1980s, Sanders was part of an artistic team with "amazing resilience, grit and talent," said Jane Golden, the city's mural matriarch. "I remember him vividly. He had this extraordinary talent, a very gifted painter."

That resilience and grit would soon be tested. 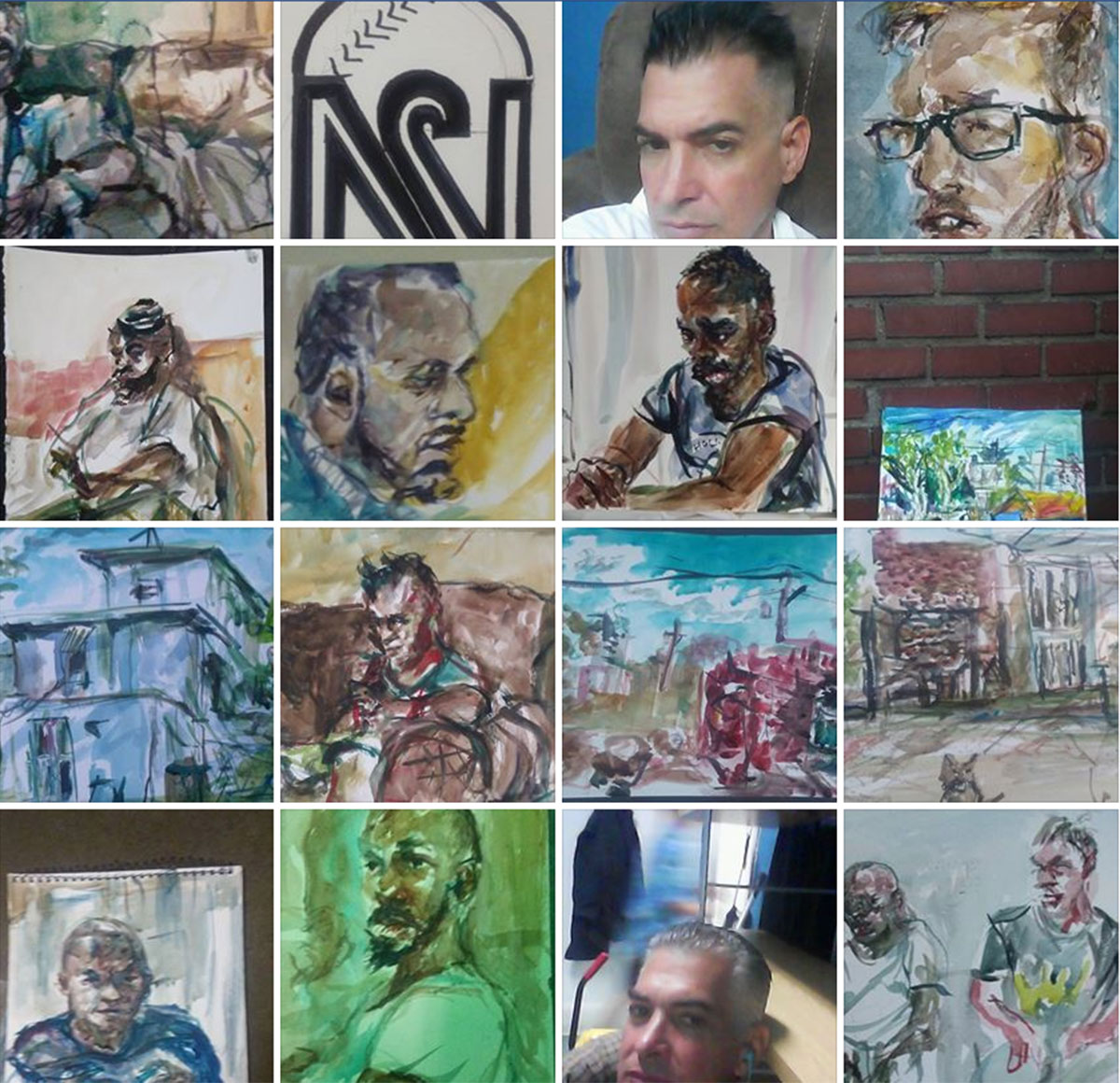 Near the end of the W. Wilson Goode administration in the early '90s, Sanders lost his job with the Anti-Graffiti Network when funding was slashed. He got by for a few years teaching art privately and working in restaurants. He lived in cramped apartments, including one at Fourth and Girard.

When the building was condemned, Sanders was out on the street, for the first time.

"I was low on funds, and at that point it was very difficult to find a permanent place," he said. "I was very disappointed in myself. I didn't save and plan for the future."

He did odd jobs for landlords in exchange for often deplorable housing. He taught art at a summer camp. He moved back to his family's home in Wayne for a while, and worked as a cook in a nearby eatery.

When he landed a short-term job associated with the staging of the 2000 Republican Convention in Philadelphia, he returned to the city, but spent nights at a shelter. 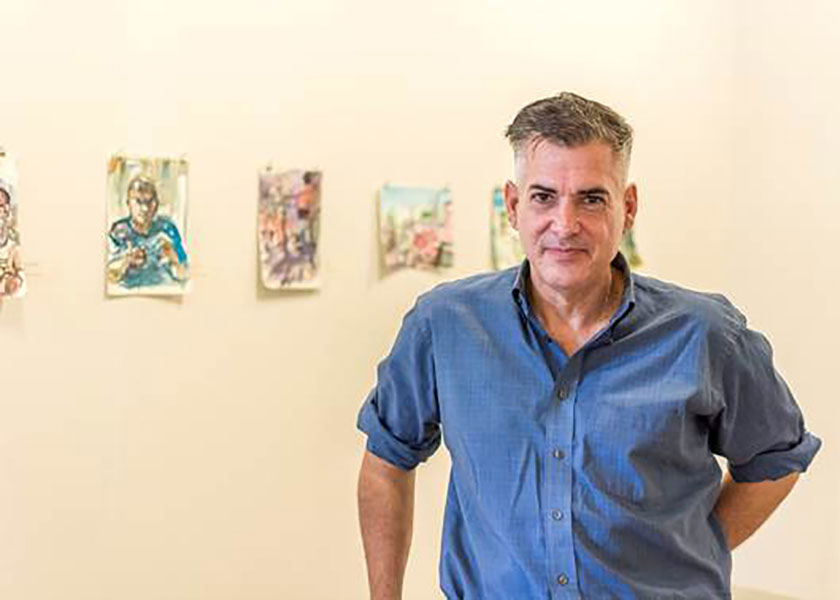 EMILY ROWAN
It took two weeks for Sanders to steel himself to go to his own exhibit.

Homeless nights turned into homeless years. Sanders' bases were Rittenhouse Square and downtown shelters. He got into fights, was robbed, and contracted an infection on the street that landed him in the hospital. After a car accident, he became addicted to opioids, he says, and was arrested for drug possession.

Sometimes he accepted help from his family, sometimes he didn't. Hilarie Showalter, a sister who lives in Media, arranged over and over for him to get social-services help. Over and over he just up and left the programs.

"He gets antsy," she said. "He knows when he leaves these programs he's back to zero, but the streets are familiar and he feels more comfortable there than in a shelter or a place with lots of rules."

Sanders concedes he "probably needed counseling. I made rash decisions and sometimes I wasn't open to help I may need."

Throughout, he kept painting, selling his watercolors when and where he could, usually for $20.

Painting made every hardship "tolerable," he said. "I could paint Philadelphia forever."

“It was amazing. He captured her soul on paper.”
Rev. Violet Little, pastor of the Welcome Church, where Sanders painted a woman's portrait during Bible study
Project HOME

In the mid-2000s, an art-therapy program lured Sanders to Project HOME, a renowned nonprofit that provides services to Philadelphia's chronically homeless. For much of the last 10 years, he was both client and employee, living in its residence and working as a lead art instructor.

"He was a big influence in the Project HOME community," said Sister Mary Scullion, the charity's president and executive director. "Many people were inspired to get more involved in art and take his classes because he is such a good artist."

But Sanders eventually left Project HOME for another program. He left that one, too.

In spring 2015, he found his way to the Lutheran Church of the Holy Communion in Center City. There he met the Rev. Violet Little, pastor of the Welcome Church, known as "the church without walls," which holds services and other programs at several sites in the city.

Sanders went into a Tuesday Bible study and sat on the floor. 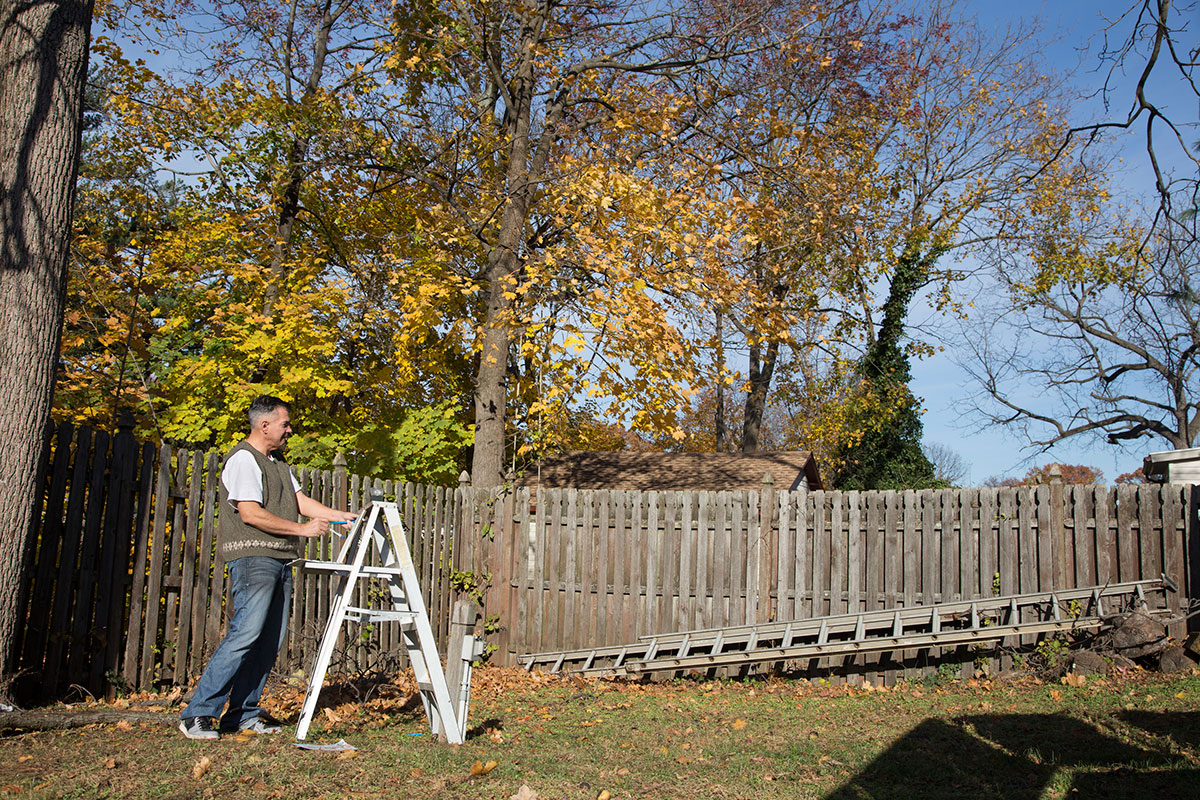 JESSICA GRIFFIN / Staff Photographer
Sanders paints outside with a ladder as an easel in Delanco, N.J.

"He was exhausted," Little said.

As the group discussed the day's lesson, Sanders saw a 99-cent watercolor set on a table laden with activities for children. He picked up the set and began painting on a folder.

By the time Bible study was over, he had a portrait of a woman in the class.

"It was amazing," Little said. "He captured her soul on paper."

As Sanders became increasingly involved with the church, the congregation began keeping paint and paper on hand for him, and stored his work.

In September 2015, Little met Thomas Southard, director of Cabrini's social justice and community engagement programs, as members of an interfaith committee working on Pope Francis' visit to Philadelphia. The pastor showed Southard one of Sanders' paintings. Southard, in turn, talked to Jacques, the Cabrini art professor, who checked out Sanders on Facebook. 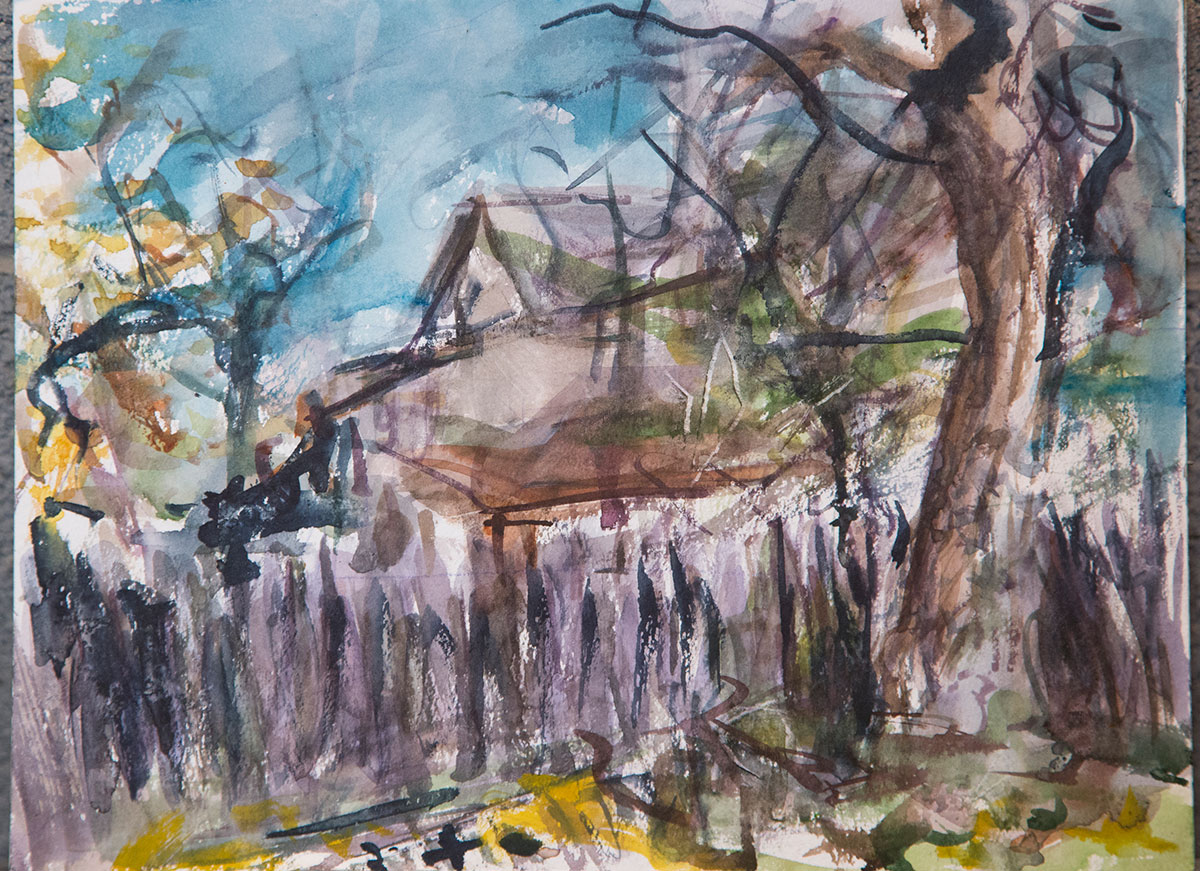 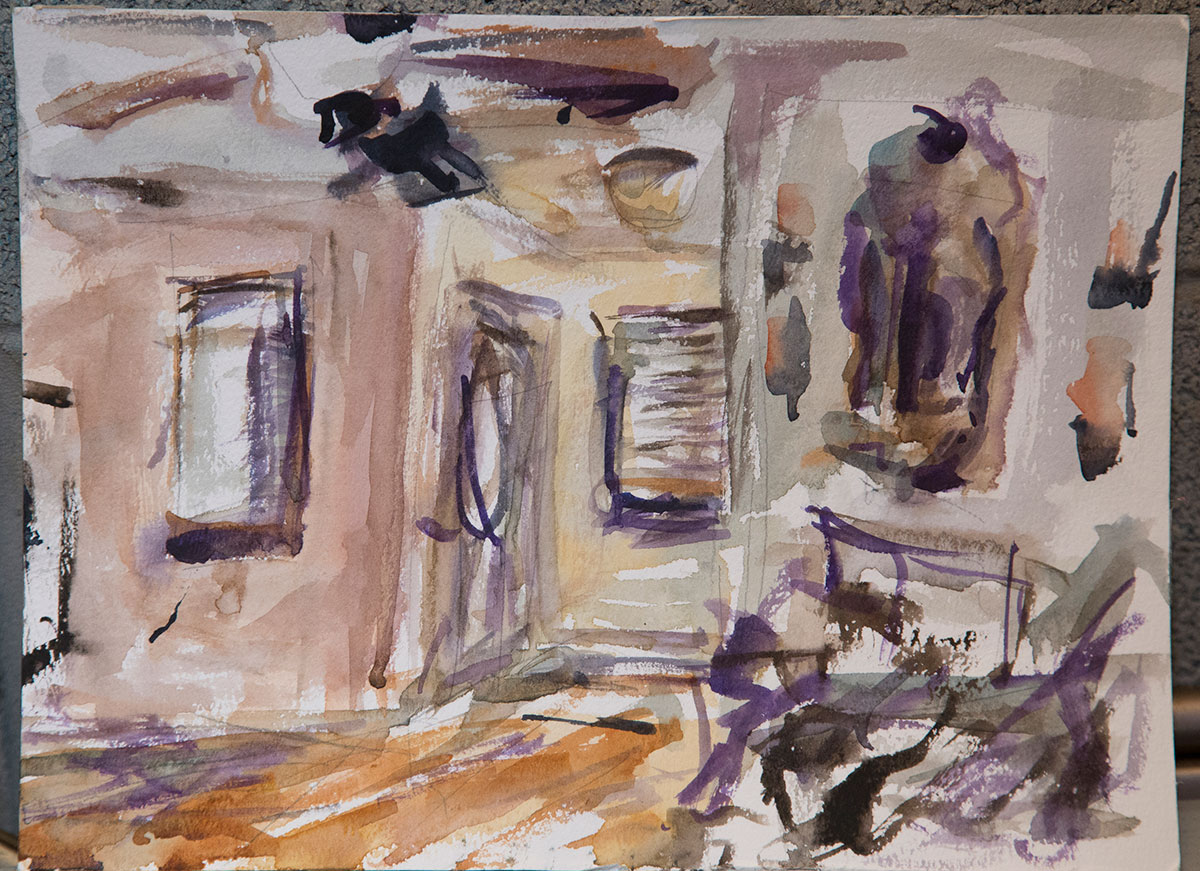 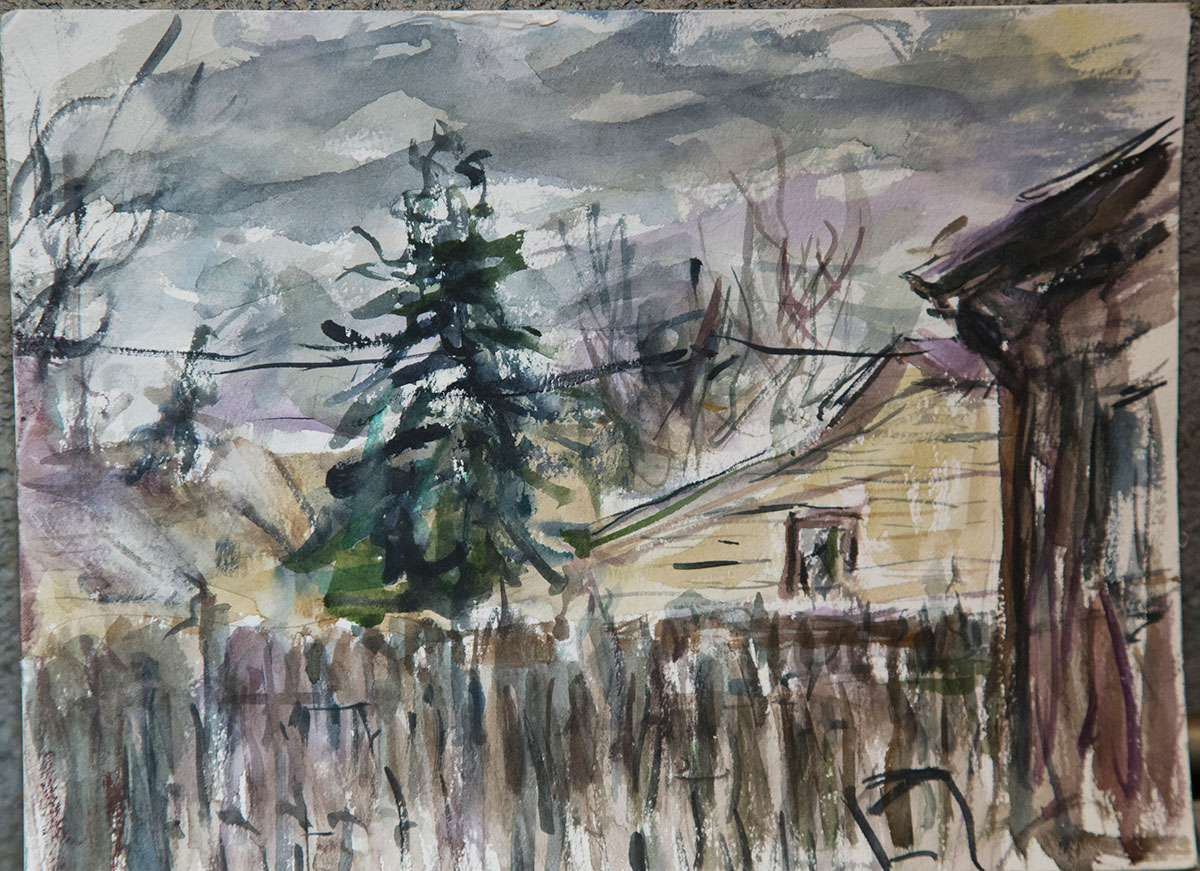 "What pulled my attention is the gritty precision of the work," said Nicholas Jacques, an associate art professor at Cabrini who helped set up Sanders' show.

Using only a cellphone his sister gave him, Sanders keeps a page that is a curious melange. It is salted with comments, some off-color, about the presidential election, which he characterizes as hyperbole mocking the candidates' outrageous claims.

The page is also a trove of paintings.

After Jacques saw Sanders' watercolors, he and Southard began planning the Cabrini exhibit, the artist's first solo show but evidently not his last.

Sanders has begun work on pieces for future exhibits — though he's doing it in a new, unusual place.

He recently moved out of a transitional residence in Frankford, another program quit. Leaving, however, wasn't "something done in a desperate situation, acting rash and jumping into the next thing," he said. It was a measured decision made "when things were going good."

Doug Sanders has moved to Burlington County, to a comfy two-story cottage with his girlfriend and her family.

Living in a genuine home "gives me independence and responsibility that I welcome," he said. "I have something I never thought I'd have." 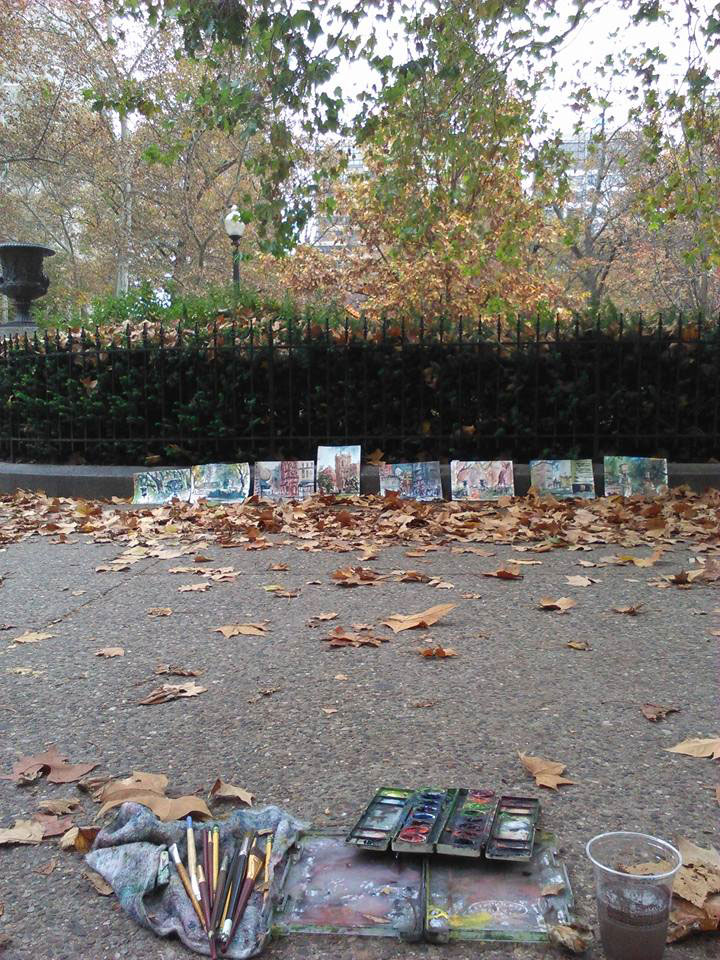