SCROLL
CHARLES FOX / Staff Photographer, insert from Princeton University
Maud Swift Bear, Rose Long Face, Ernest White Thunder, and Dora Brave Bull were among the first students to arrive at the Carlisle Indian Industrial School on Oct. 6, 1879, and are all buried in the cemetery.
‘Those kids never got to go home’
Nearly 200 children died and are buried at the former Carlisle Indian School. Now the Rosebud Sioux want to reclaim their ancestors.
By Jeff Gammage / Staff Writer, jgammage@phillynews.com

CARLISLE, Pa. — They want the bones of their children back.

They want the remains of the boys and girls who were taken from their American Indian families in the West, spirited a thousand miles to the East, and, when they died not long after arrival, were buried here in the fertile Pennsylvania soil.

The brevity of those lives, and the effort of a South Dakota tribe to reclaim them now, spring from a turn-of-the-century episode of forced assimilation and cultural destruction — one that continues to haunt and torment the Rosebud Sioux. 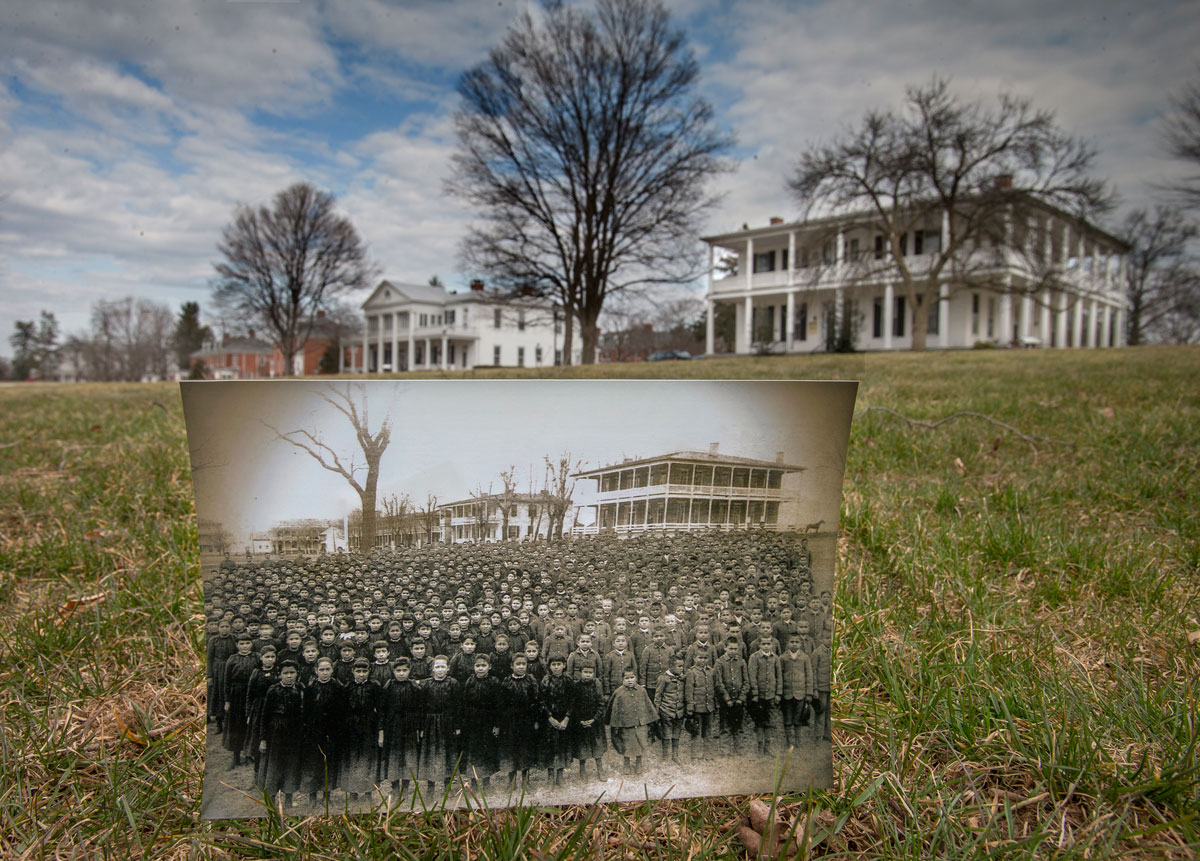 Today, many people know this small borough as a stop on the turnpike or as the site of Dickinson College.

Life at the Carlisle Indian School

But from 1879 to 1918, the town was home to the Carlisle Indian Industrial School, the flagship of a fleet of federally funded, off-reservation boarding schools. It immersed native children in the dominant white culture, seeking to cleanse their "savage nature" by erasing their names, language, dress, customs, religions, and family ties.

The Carlisle goal: "Kill the Indian, save the man." 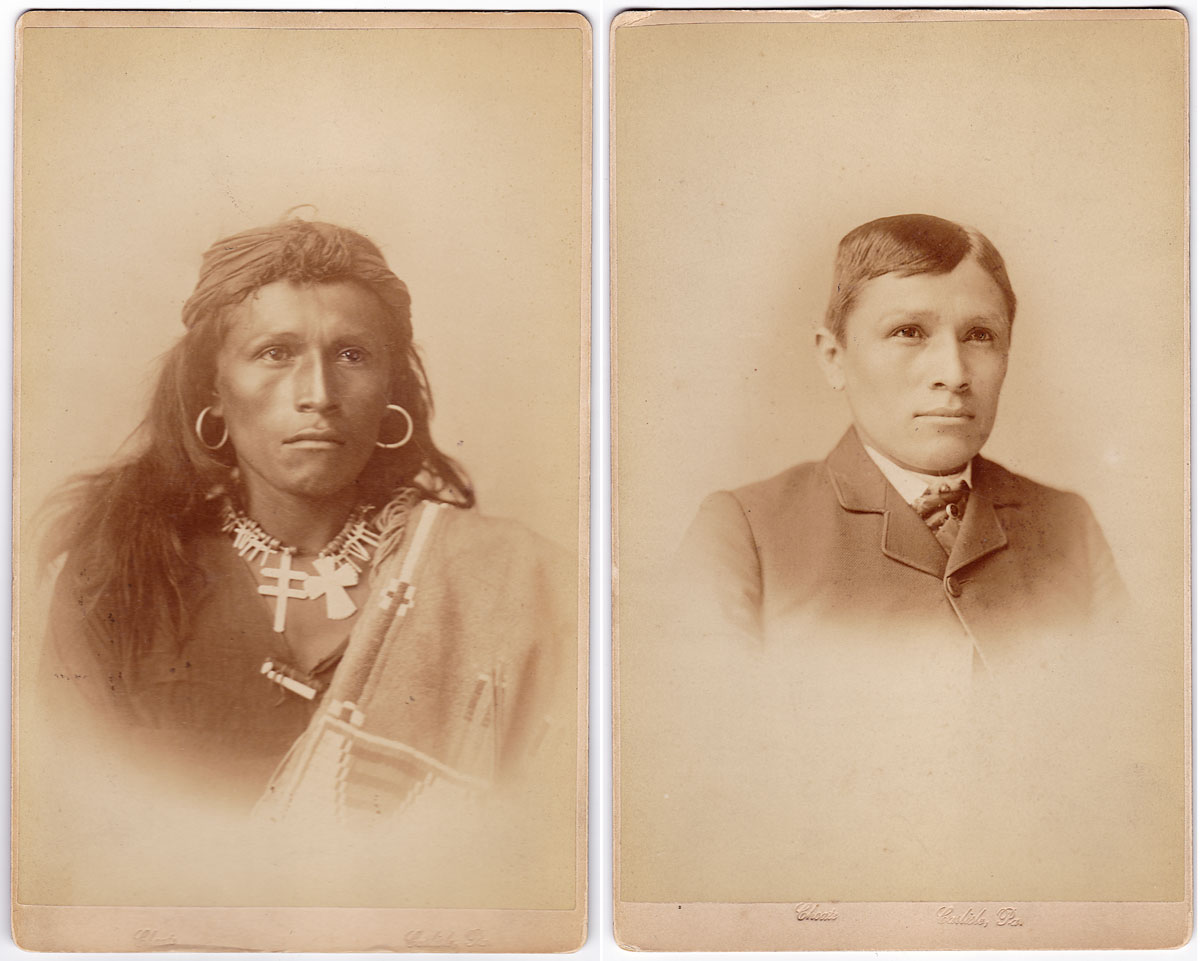 Courtesy of the Carlisle Indian School Digital Resource Center, //carlisleindian.dickinson.edu/
Tom Torlino, who was Navajo, as he entered the school in 1882 (left), and how he appeared three years later.

Sometimes, both perished. Nearly 200 children are buried here in the Indian cemetery.

Now the Rosebud Sioux seek to have at least 10 tribe members brought back to the reservation, where they can be reburied after appropriate native prayers and services.

“A hundred and thirty years later, this still has an impact on our youth.”
Russell Eagle Bear, Rosebud Sioux historic preservation officer

"We talk about historical trauma," said Russell Eagle Bear, the tribe's historic-preservation officer. "A hundred and thirty years later, this still has an impact on our youth. We're trying to make peace with those spirits and bring them home."

It's no simple act of graves repatriation. The cemetery lies within the perimeter of the Carlisle Barracks, an Army installation that once was the grounds of the Indian school. The tribe asked the Army in January to return its children's remains and the Army said no.

That's OK, Eagle Bear said. Senators and congresspeople are getting involved — and other Indian nations too. The tribe is planning a pilgrimage from South Dakota to Carlisle this summer.

This modern battle over the past, he said, is just beginning. 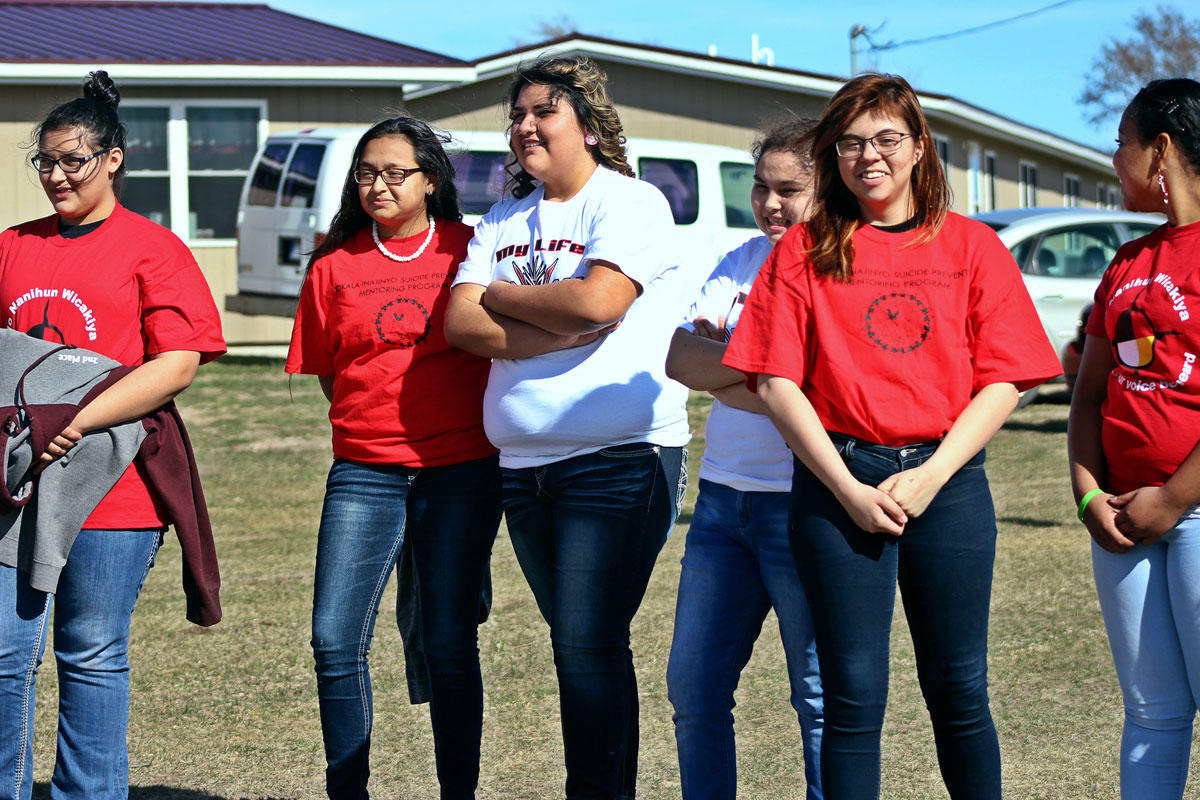 In a way, the Sioux recovery effort began at the White House.

Afterward, the group drove north to see the site of the Indian school, widely known for its association with sports legend Jim Thorpe, and to visit the cemetery.

Sydney Horse Looking, 17, became upset upon being stopped at the Army barracks gate for a mandatory security check — "I have to prove my identity to visit my ancestors?" — and even more emotional when she reached the graveyard.

"Those kids never got to go home," she said in an interview. "I would wonder why no one came and got me: 'Why am I still here?'"

The Rosebud youths placed candy on the graves. They sang prayer songs and called out the names of the children.

As the group prepared to leave, the cemetery filled with swarms of flashing fireflies.

“It was like their spirits let us know they heard those prayers.”
Micah Lunderman, Rosebud youth counselor

Back home in Rosebud, the youths asked the Tribal Council: "Why aren't we doing something to bring them home?"

No one knew the answer.

In January the Rosebud Tribal Council passed a formal resolution to seek the return of the remains and wrote to President Obama and other federal authorities.

"It's pretty unusual," said David Beck, a Native American studies professor at the University of Montana. "If the Rosebud Sioux are successful, other tribes will quickly take notice." 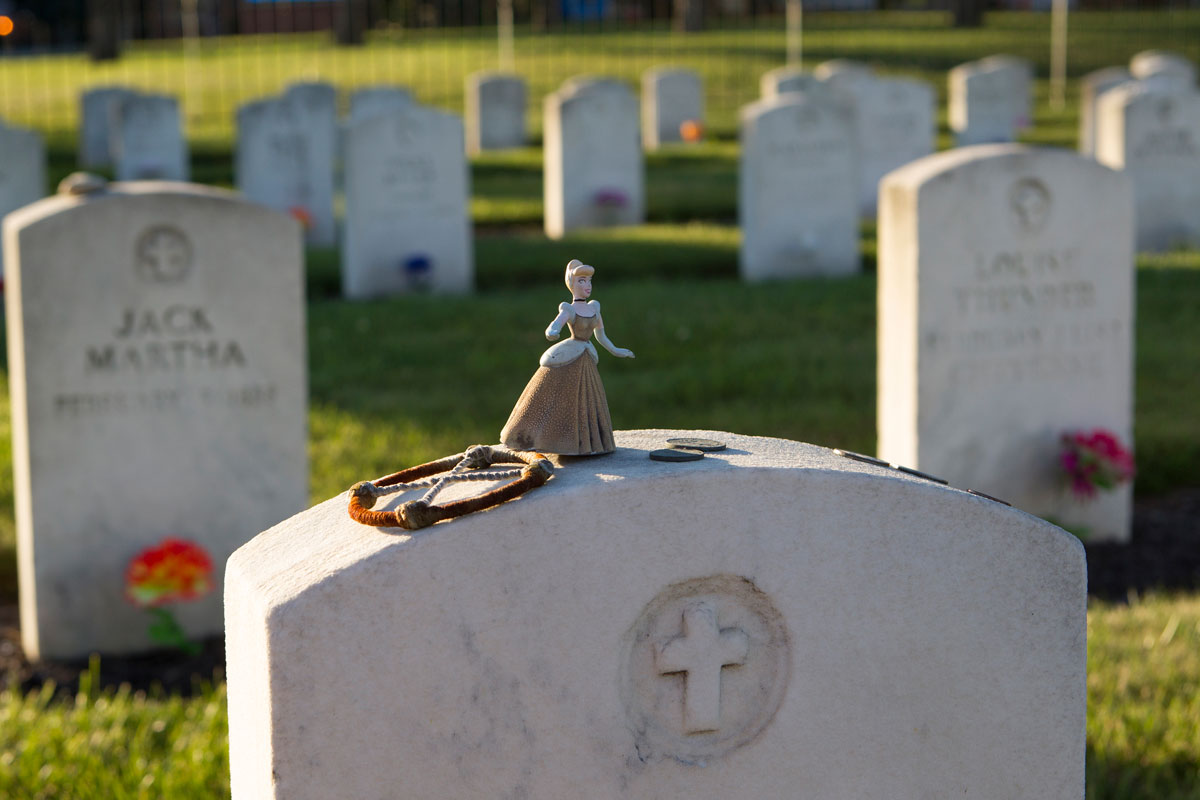 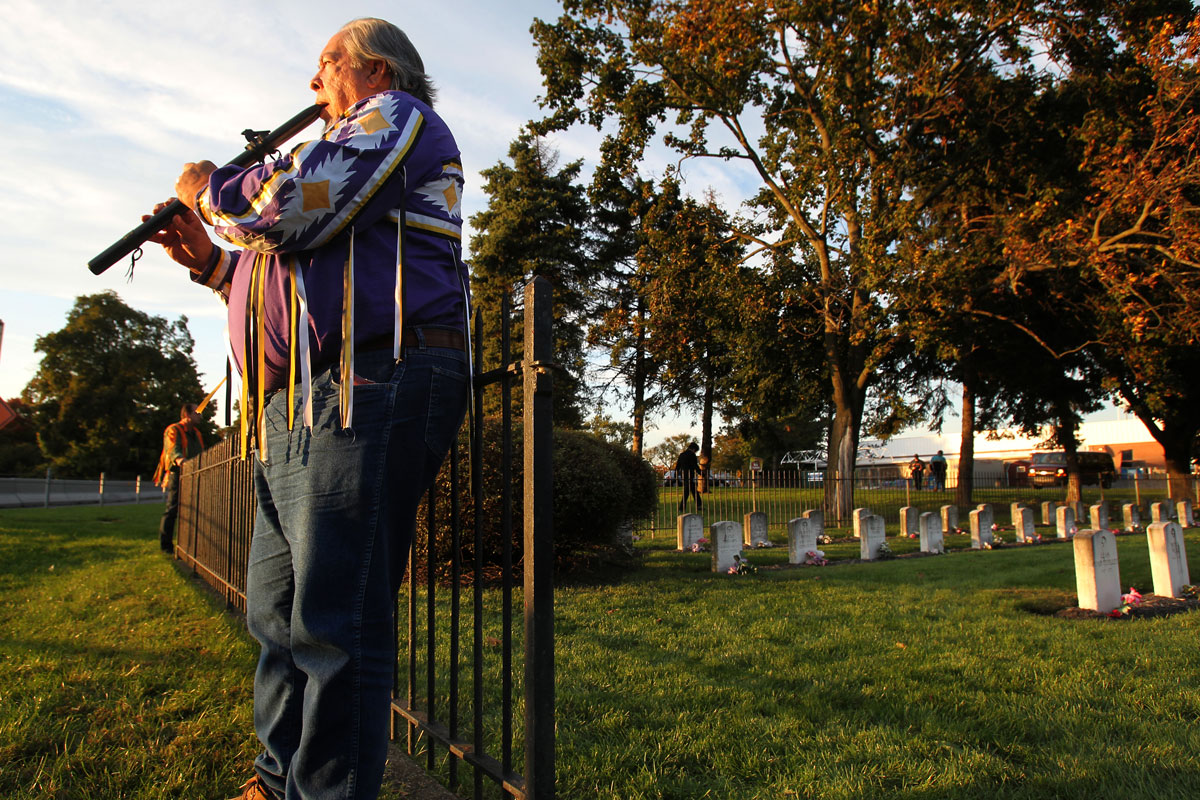 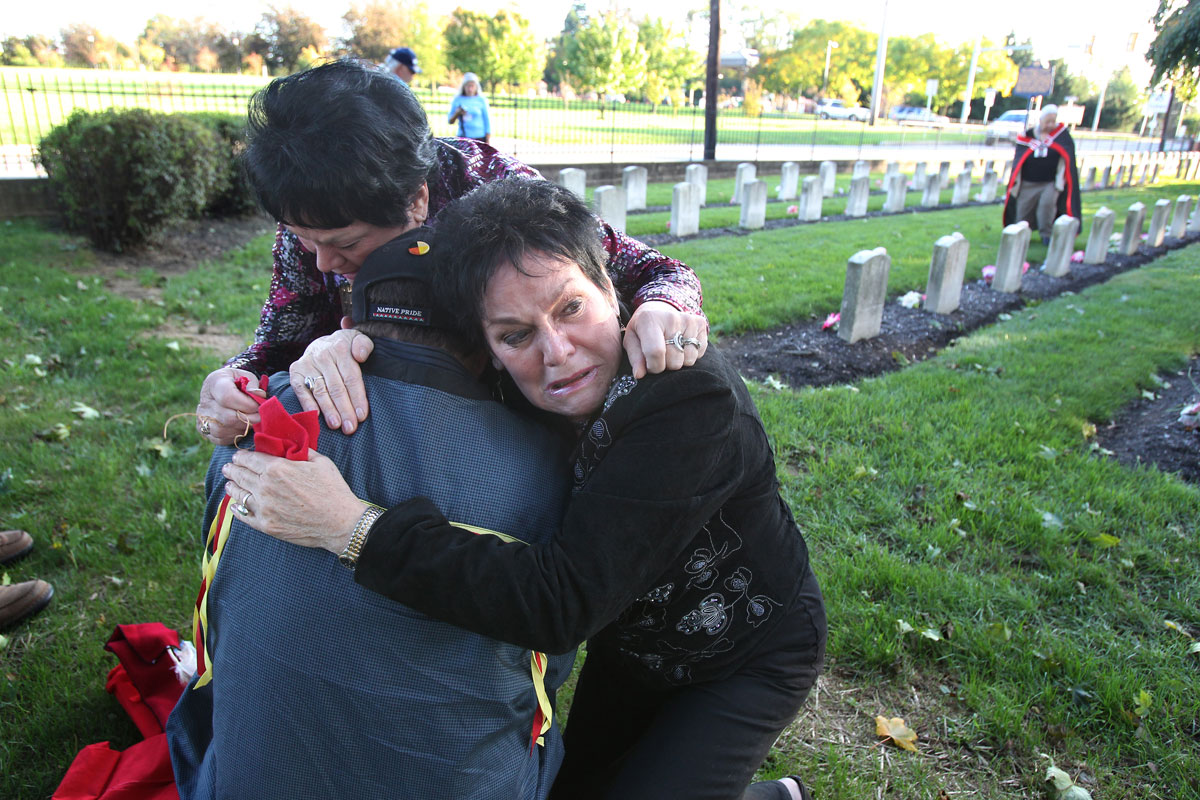 The grave in the first row, first stone belongs to Lucy Pretty Eagle, one of the Rosebud students buried at the Carlisle cemetery. Toys, coins, and other gifts left by visitors mark the spot. Warren Petoskey plays his flute at the Indian Cemetery at the Carlisle Barracks. His grandfather and great aunt attended Carlisle. Kay McGowan (left), a cultural anthropologist at Eastern Michigan University, and Fay Givens, executive director of American Indian Services, embrace Randy LeBar in the Indian Cemetery at the Carlisle Barracks. (CHARLES FOX / Staff Photographer)

The cemetery isn't half the size of a football field, 186 graves in a rectangular lawn, surrounded by a chest-high iron fence.

On the ground by the bleached white markers, visitors have left children's toys, gifts of cloth horses, dolls, and tiny plastic dinosaurs.

The most noticeable grave — first row, first stone — belongs to Lucy Pretty Eagle, one of at least 10 Rosebud children to die at the school.

Two others, Maud, the daughter of Chief Swift Bear, and Ernest, son of Chief White Thunder, arrived together the day the school opened on Oct. 6, 1879 — and died on the same day 14 months later.

One marker is inscribed "Friend HH Bear," a shortening of Friend Hollow Horn Bear, who died in 1886.

That child, said Duane Hollow Horn Bear, was his grandfather's older sister. Her faraway death and burial still tears at his family.

He teaches Lakota studies at Sinte Gleska University on the reservation. But no one needs textbooks to know what happened at Carlisle, he said. Just look at the photos.

"None of the kids are smiling," Hollow Horn Bear said. "They had nothing to smile about." 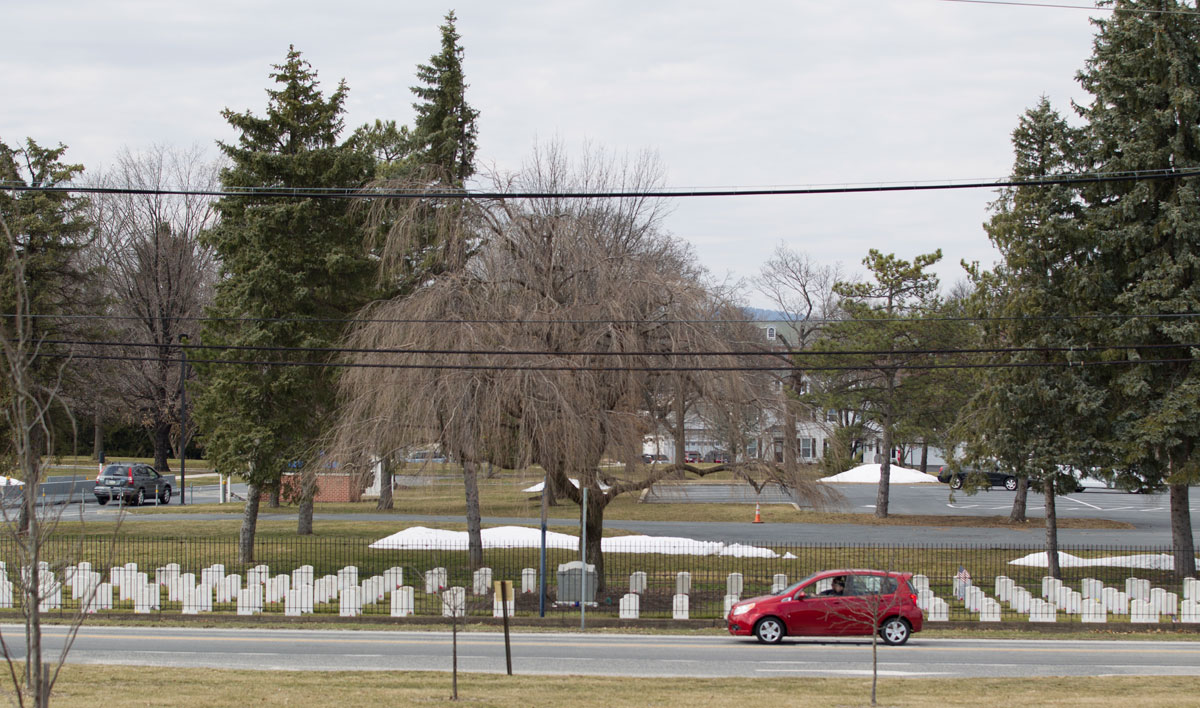 The boys, some as young as 4, wore Army-style uniforms, the girls long dresses. Children who spoke their native language could be beaten.

Many were kept from their families even in summer, sent to local households to provide ongoing immersion and, for the white hosts, cheap labor.

“Discipline was constant. Punishment, abuse, and illness were frequent”
Author Norman Matteoni in "Prairie Man," his study of Sitting Bull

"Discipline was constant," Norman Matteoni wrote in Prairie Man, his study of Sitting Bull. "Punishment, abuse, and illness were frequent."

So was death. In the cemetery lie children from more than three dozen Indian nations, their lives documented by Cumberland County historian Barbara Landis and Australian anthropologist Genevieve Bell, experts on the school.

The headstones show no birth dates or ages. Some misspell names. Thirteen are marked "Unknown."

The children died from tuberculosis, pneumonia, flu. Some could not survive the pain of separation from their families, their health impaired by the school's strict military routine.

In the first decade, 96 children died, according to Jacqueline Fear-Segal, an authority on American history. Preston McBride, an Indian studies scholar, estimates that more than 500 students died at Carlisle or soon after they left, sent home by the school when it became clear they were too ill to survive.

The dead were buried near the athletic fields, that cemetery moved in 1927 to an isolated patch by the rear gate. After the 9/11 terrorist attacks, security changes turned the back gate into the main entrance, giving the graves prominence.

"For me, going through [the cemetery] is extremely draining," Landis said. "Because I have children and I have grandchildren. My children never went to a school where there's a cemetery."

In his grave at Arlington National Cemetery, Richard Henry Pratt surely must be spinning. He always knew what was best for Indians. 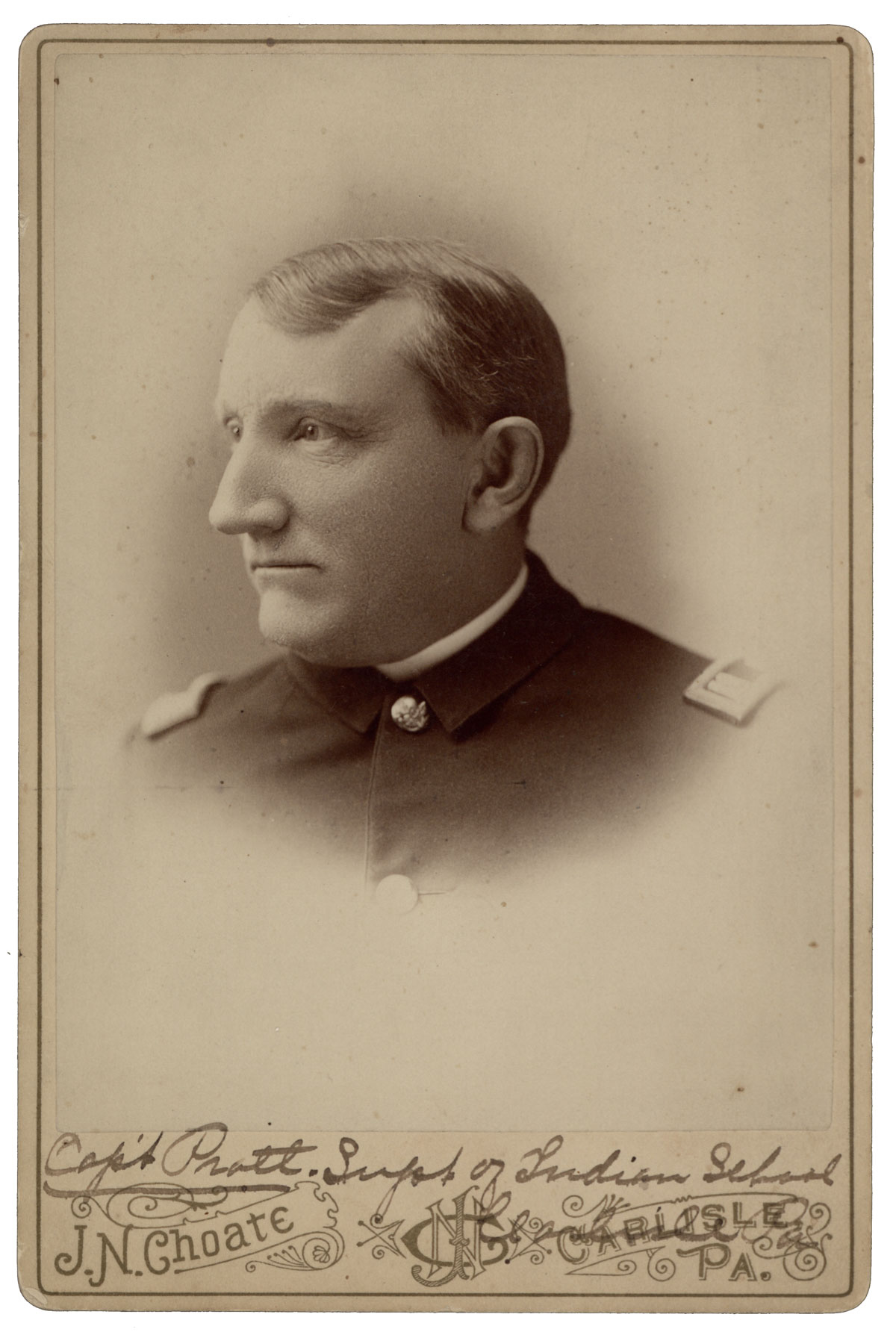 A self-righteous former 10th Cavalry commander and frontier Indian fighter, he had the idea to solve "the Indian problem" by forcing natives to acculturate.

He won approval to use the old barracks as a campus, then traveled to Dakota Territory, first to Rosebud, where he persuaded Chief Spotted Tail to send several dozen children, and on to Pine Ridge.

Pratt argued to tribal leaders that if Indians had been better able to speak and read English, they would not have been so abused in treaty negotiations. At a time when Indians were being forced onto reservations, he promised the children would be safe, fed, and taught to make their way in the white man's world.

The two tribes sent 82 children, who embarked on a long and often alarming journey by horse, steamboat, and train. At stations along the way, white people gathered to gape at the youths. The locomotive stopped in Sioux City, Iowa, moved east to Chicago, eventually reached Harrisburg, then turned southwest to Carlisle, a town of about 7,000.

Many were relatives of chiefs or powerful leaders. Coming only three years after Custer’s troops were wiped out at the Little Big Horn, it placed chiefs' children securely in white hands. 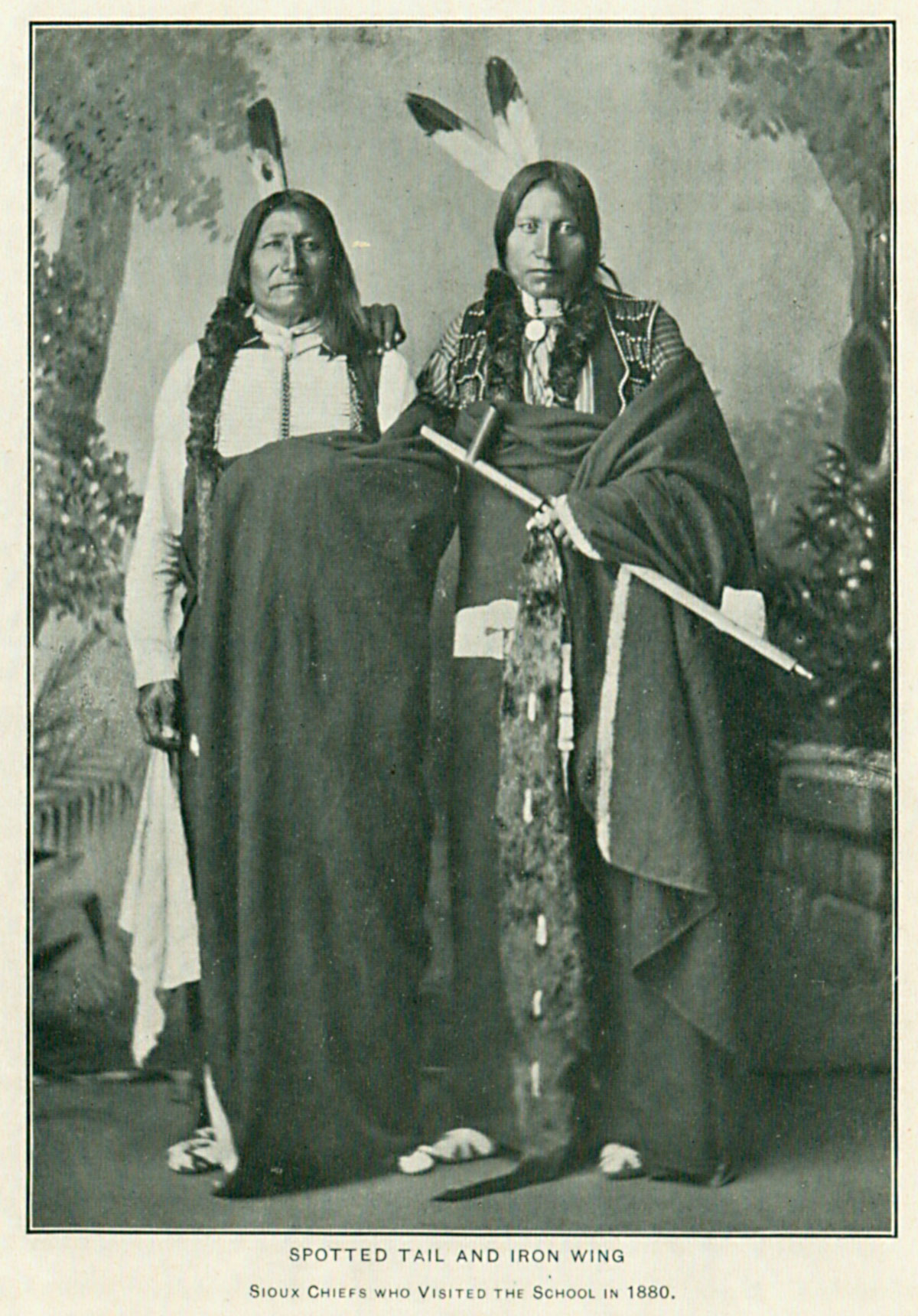 "They were hostages," Eagle Bear said.

But the school wasn't created to commit evil. Pratt and his Quaker and Christian-missionary allies thought they were doing a good thing, a noble thing, helping to save a vanishing race.

"We invite the Germans to come into our country and communities and share our customs, our civilization," Pratt lectured in 1892. "Why not try it on the Indians?"

Some Indians agreed with him. The world was changing fast, and Indian leaders saw that white men, once rare, now covered the land like ants.

Carlisle's enrollment grew to 1,000 a year. The band performed at presidential inaugurations, and in the early 1900s the football team became a national powerhouse, led by Thorpe and coached by Pop Warner. 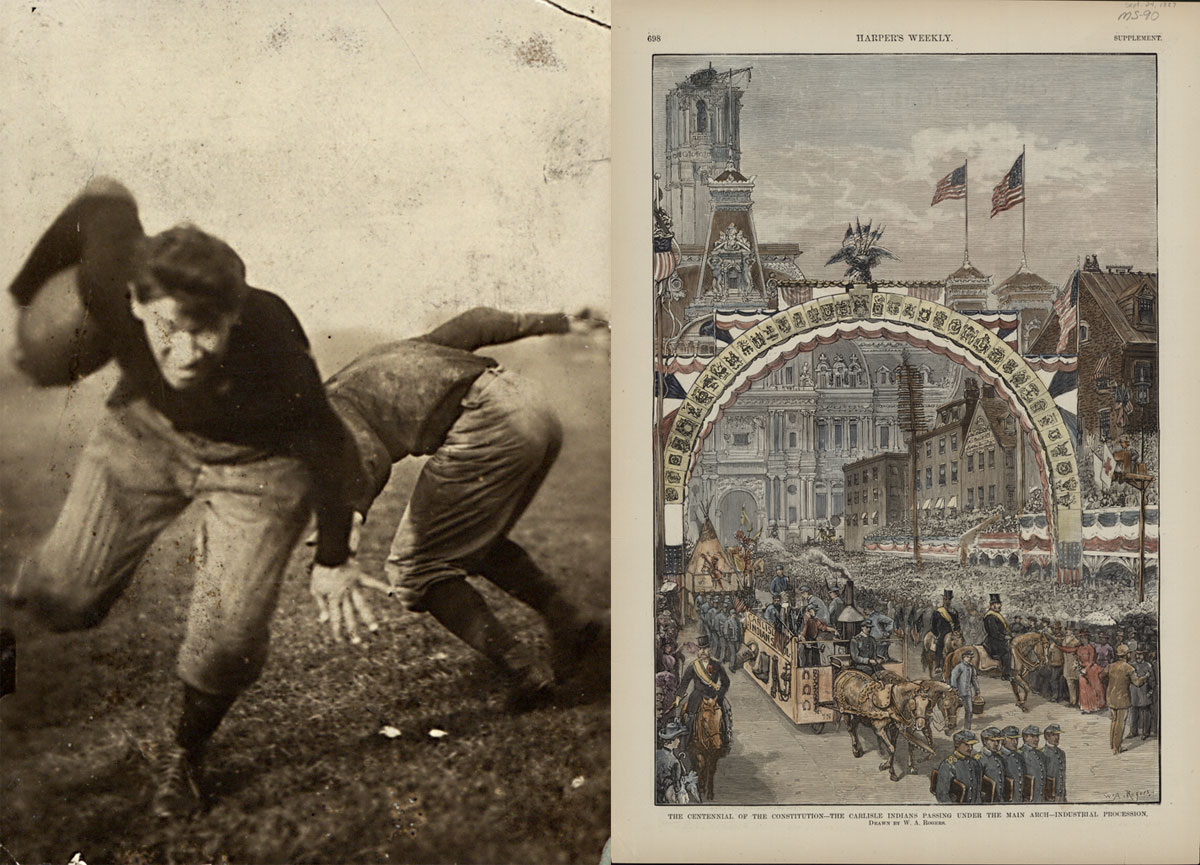 Today Carlisle's legacy, scholars say, is at best conflicted, creating opportunities for some students, but causing confusion and even deaths among others, its role as a prototype helping to spread misery.

Indian children often were seized from their families. Some reservation parents were told to give up their young ones — or their food rations.

Children were transported over 1,000 miles to Carlisle 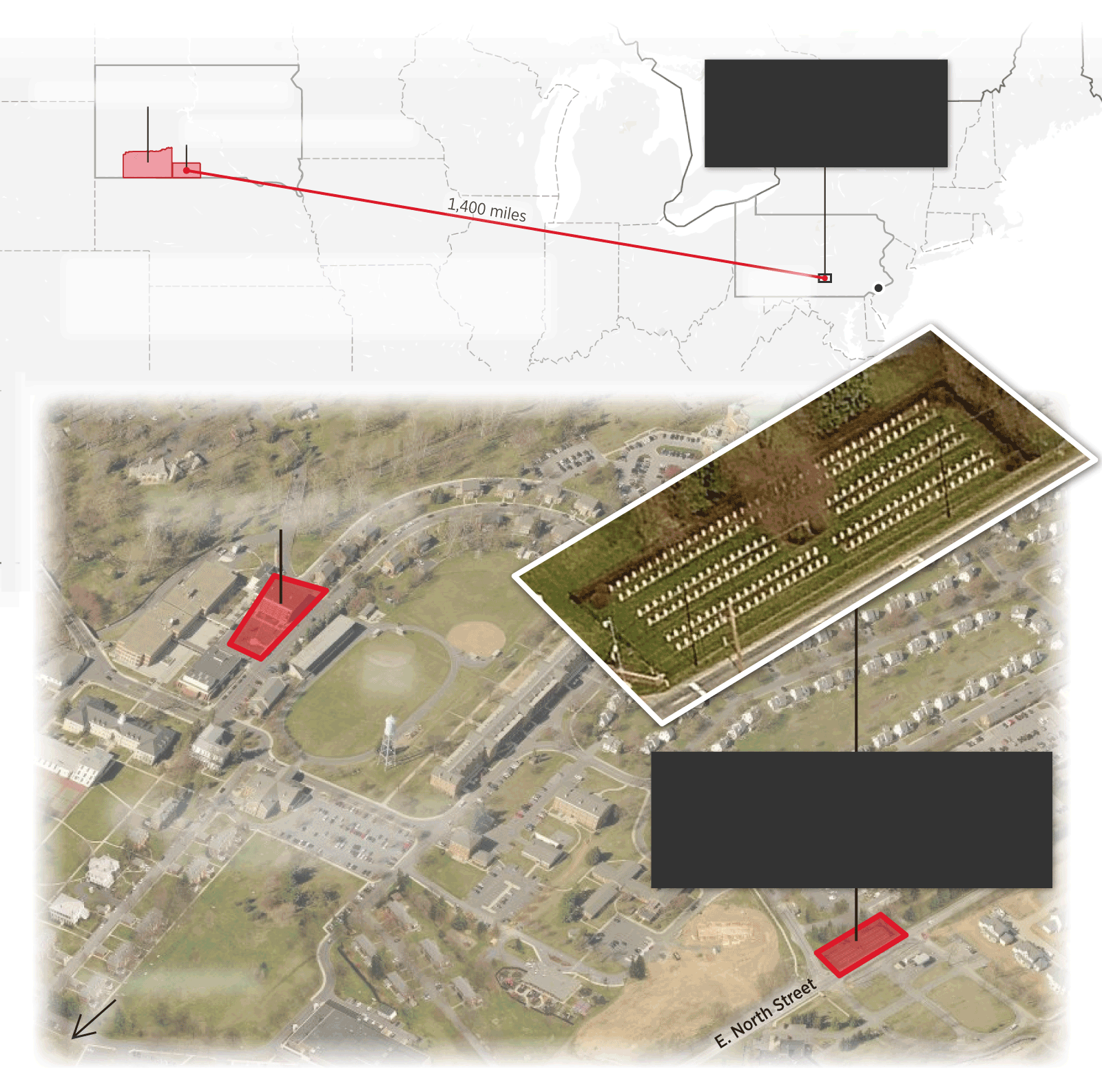 In 1879, the journey from the Rosebud Reservation to

took four days by train. Today it is a 21-hour drive.

The cemetery was moved to an isolated 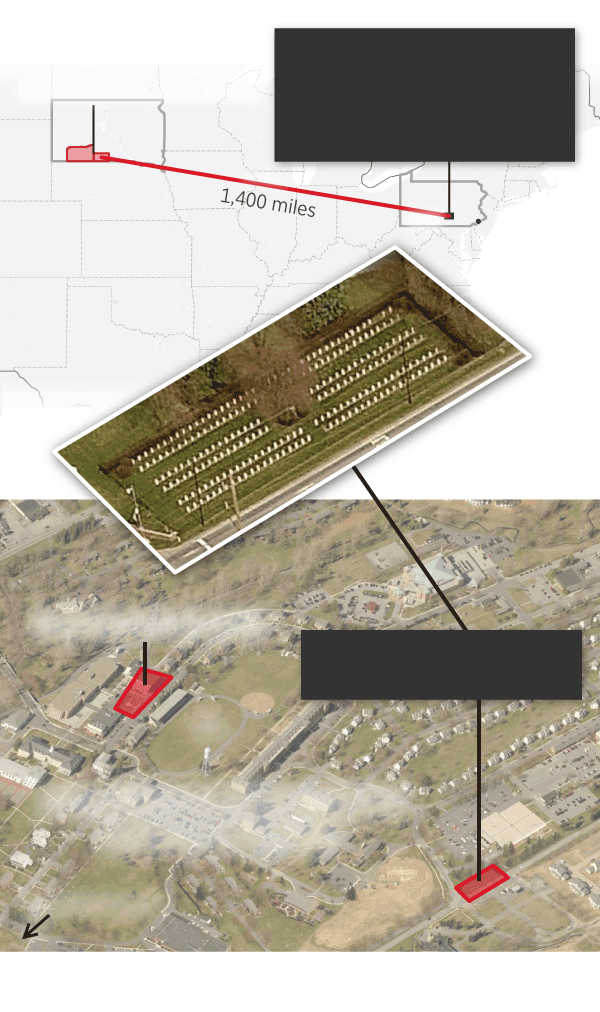 Off-Reservation Indian Boarding Schools
Beginning in 1879 and continuing well into the 20th century, the federal government transported at least 830,000 American Indian children to off-reservation boarding schools.
That's equal to the population of San Francisco (837,000 in 2013) and could fill up the Wells Fargo Center 42 times. 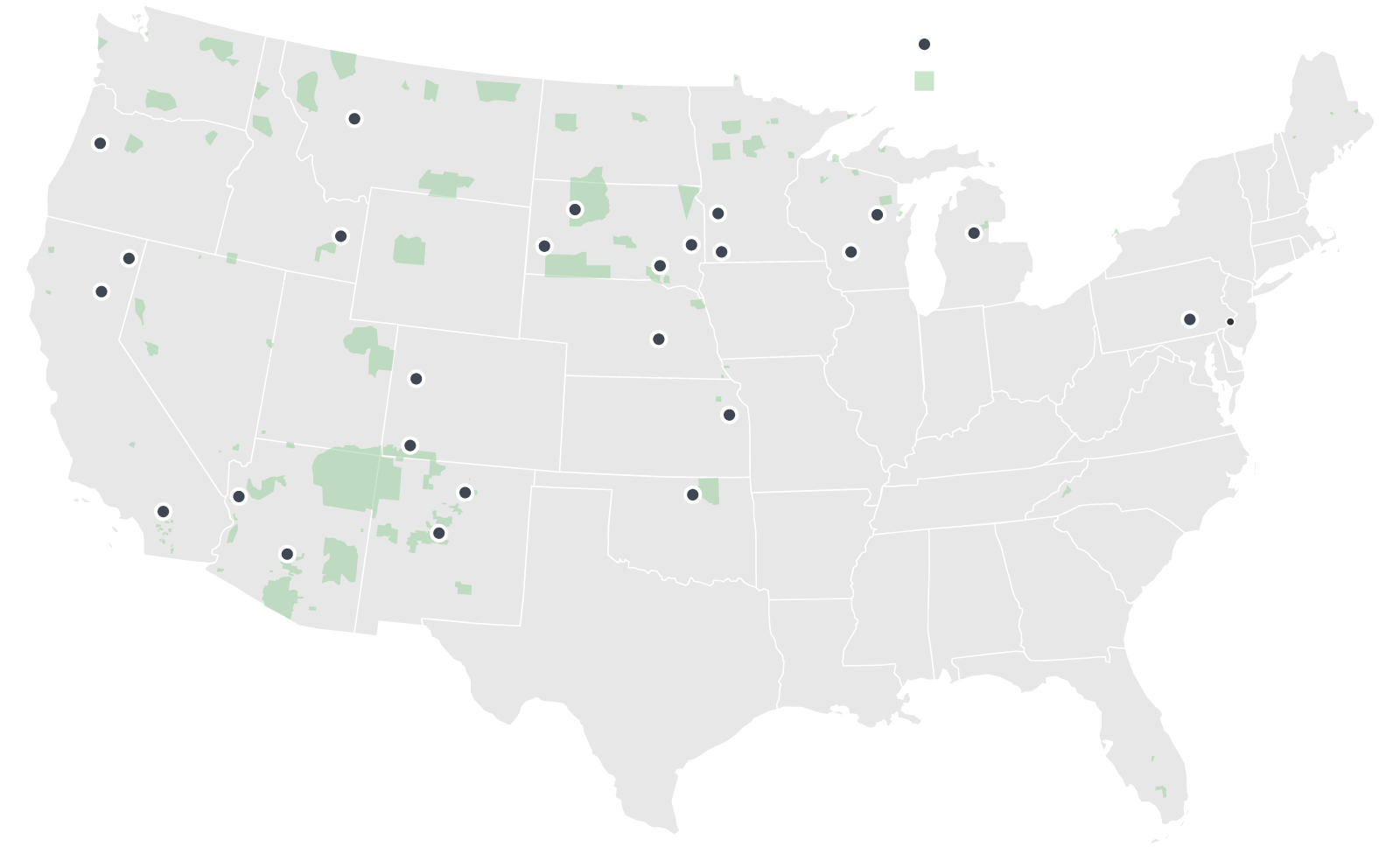 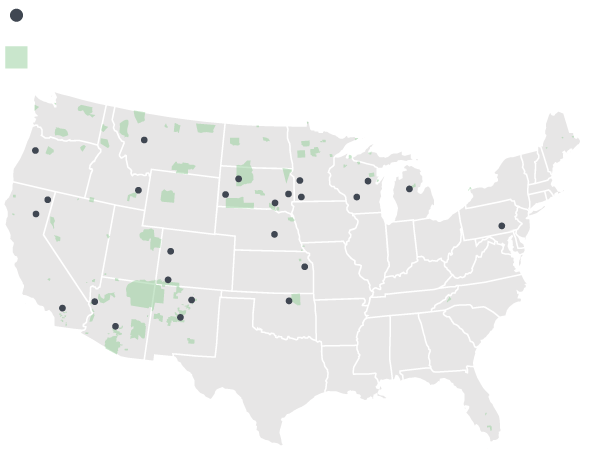 The push for repatriation is gaining strength.

The Northern Arapaho, a Wyoming tribe, want the remains of three children returned from Carlisle. The Great Plains Tribal Chairman's Association went further, calling for remains at all boarding school sites to be returned upon request.

Signs emerged this month that the Army's position might shift.

"Our desire is to work with the Rosebud Sioux, Northern Arapaho, and any other interested tribes to bring this issue to resolution," Army spokesperson Dave Foster said.

The Army wants to meet with the two tribes in government-to-government consultation, to address the legal requirements involved in disinterment, he said.

Some in Rosebud are optimistic.

"We have a lot of momentum," said Lunderman, the youth counselor. "We believe there's going to be a good outcome. ... It's really going to bring a lot of closure to our families."