New Jersey will boost its gasoline tax by 4.3 cents per gallon on Oct. 1, catapulting it from the nation's second-lowest gas tax in 2016 to the ninth-highest this fall.

But don't worry, Pennsylvanians: You're still Number One.

Gov. Murphy's administration sought to distance itself from the tax increase to 41.4 cents per gallon, saying the boost was mandated by a 2016 law that links the fuel-tax rate to revenue. Because motorists are buying less fuel in New Jersey, the tax hike is needed to close a $125.2 million shortfall.

The fuel tax for diesel also increases 4.3 cents per gallon, to 48.4 cents.

New Jersey's tax increase, on top of a 23-cent increase imposed in 2016, reinforces the state's rapid retreat from a cheap-gas haven. In this region, that distinction now belongs to Delaware, whose 23-cent state tax rate is 18.1 cents below New Jersey, and 35.7 cents per gallon less than Pennsylvania's. 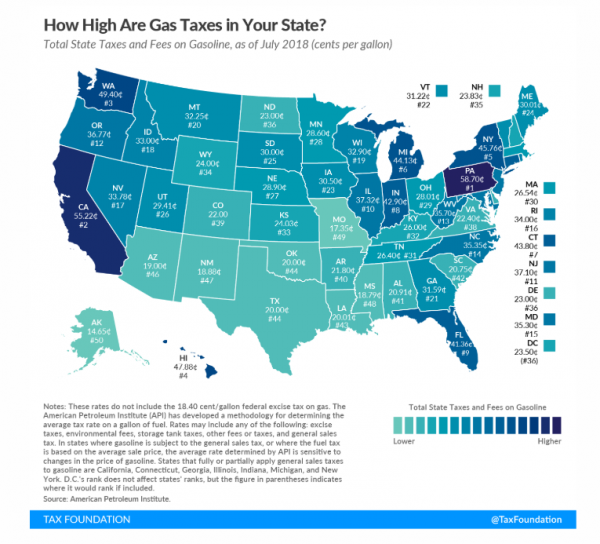 Pennsylvania’s tax rate shot up following approval of a 2013 law that boosted annual contracts for bridge and road work by about $1 billion a year. Pennsylvania’s fuel tax is 3.5 cents greater than the next closest state, California.

Alaska has the lowest fuel tax in the nation, at 14.65 cents, only a quarter of Pennsylvania's tax. But relatively few drivers benefit from Alaska's low tax, since the sparsely populated state has fewer than a million registered vehicles, including 45,000 low-mileage snow mobiles.

New Jersey's tax is unusual because it rises and falls depending upon consumption, which provides some political cover for elected officials.

"The precise change in the gas tax rate is dictated by several factors, all of which are beyond the control of the current administration," Elizabeth Muoio, New Jersey's state treasurer, said in a statement.

New Jersey's fuel retailers denounced the tax increase, saying the higher pump price will only drive more motorists to fill up in neighboring states, requiring yet more tax increases in the future.

"This dramatic of a tax increase will hurt small businesses, families, and ultimately drive fuel sales even lower, creating the need for further excessive tax increases over the next several years" said Sal Risalvato, executive director of the New Jersey Gasoline and C-Store Association, in a statement.

Risalvato said that station owners near New Jersey's borders have reported "dramatic decreases" in sales since the state's new tax went into effect, and the latest increase brings New Jersey's tax to just 4.36 cents less than New York state's tax.  "This increase will virtually wipe out our advantage," he said.

New Jersey gas station owners also face the additional cost of having to pay gas-pump attendants, as it is one of only two states that still bans self-serve dispensers. Oregon, the other state, this year relaxed its law to allow self-serve stations in counties with less than 40,000 population.