The internet has turned memes, the seemingly innocuous photos of everyday people or celebrities, into their own coded language, like public inside jokes that are shared widely through Twitter, Facebook, and beyond.

Wilmington, Del.. artist Alim Smith has turned them into art.

Smith, known as Yesterdaynite to his 25.8 thousand Instagram followers, will show "MEMES," a collection of 20 paintings based on some of the most popular internet memes, especially those prominent in black online culture. He'll exhibit these works Friday at Wilmington's Chris White Gallery.

There are stories behind his work, Smith says, and for "MEMES," it's about community, namely the one that shares these images as part of a shared internet language. Like the medium he plays with, the shows, Smith says, are intended to elicit laughter from those who come to the gallery.

Smith, 26, began sharing his interpretations of these memes — bold, colorful paintings that exaggerate and play with each image — during Black History Month to highlight how prevalent these images have become in black culture. He started by painting a version of "Crying Jordan," a photo of basketball legend Michael Jordan, tears streaming down his face, as he gave a speech at his 2009 Basketball Hall of Fame induction ceremony. Eight years later, this image of Jordan has been superimposed on different people to represent someone's taking a loss. When the American Health Care Act didn't reach a congressional vote, for instance, Paul Ryan was given the "Crying Jordan" treatment. 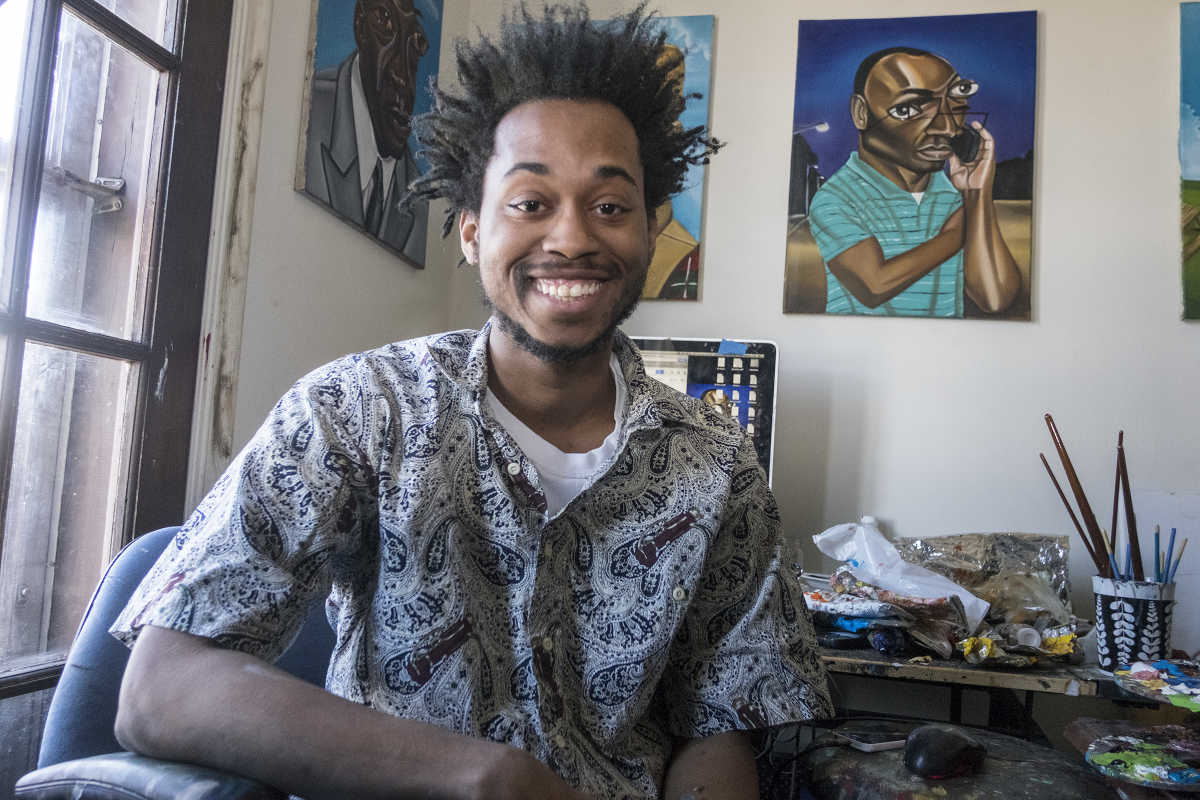 ED Hille / Staff Photographer
Alim Smith in his studio.
Things to Do Newsletter

(Smith even kind of became his own meme in a photo was taken of him greeting a lady friend with a kiss. The black-and-white image, expressing black love, went viral.)

Smith refers to himself as an Afro-surrealist, a genre he describes as "making it to the NBA [after] living off food from the corner store," or like hip-hop, which he says is "one of the most surreal, Harry Potter kind of experiences ever," because "rhyming words has turned into a billion-dollar industry."

"Black life is surreal," he says. "All I have to do is capture it."

Smith is bringing that surrealism to the masses. Publications like New York magazine, Time, OkayAfrica, and HuffPost Black Voices have all featured "MEMES." Twitter highlighted his work in its "Moments" feature, and Black Twitter has heralded Smith as a legend.

“It’s really been kind of overwhelming,” Smith said. Describing his success, he sounded as if he were out of breath in disbelief.  “A lot of people have been sharing it everywhere, and it was trending online with Trump.”

Trending is an important metric for an artist like Smith, who has seen his following grow on the internet, rather than the gallery circuit.

When he was 11, he applied to Wilmington's Cab Calloway School of the Arts because of a crush he had on a girl. He got in. Nothing came of the crush, but he left with a newfound passion for art. When he graduated, he applied to art schools, but didn't get in. Still, he kept pursuing art. He said rapper Soulja Boy kept him going. "Because if he can, how can I not?" he says with a laugh.

Roll Safe 18 x 24 Oil on Canvas hands down this one is my favourites! at least out of the ones i've uploaded so far it just makes me feel so many emotions idk if its the eyes or the smirk but it just makes me smile lol Ive come to find that i thoroughly thoroughly enjoy painting clouds I don't wanna call this roll safe thats just the name of the meme WHAT is a good name for this expression? because i'm drawing a blank I think this might be one of the last pieces i upload before the show, or probably one more BUT on to bigger things I really got real love for everyone that has helped spread and share my pictures and showing so much love because its honestly been insane, I still haven't figured out how to process it at all but i'm very appreciative and it just makes me wanna go super saiyan and go as hard as possible! I can't really say thank you enough I'm just really glad that the work resonates with the people and that this is only the beginning I have so much more to develop ( still not fully processing the love) THANK YOU THANK YOU THANK YOU THANK YOU and ART SHOW MARCH 31st WILMINGTON DELAWARE CHRIS WHITE GALLERY 701 N. SHIPLEY STREET from 6-10 pm its gonna be a fucking dope show! memes.eventbrite.com Thank you!!!

In 2008, when Barack Obama was elected, Smith and his friend, fellow artist Mike Silva, traveled to D.C. and made prints of the new president. In those first five months, they, by Smith's estimation, sold $20,000 worth of prints.

And he blew it all.

Smith began going door to door (or DM to DM) to sell prints and commissions.

He built a following and got his work in the hands of producer Swizz Beatz, Russell Simmons, Solange, Chance the Rapper, Erykah Badu, and Outkast's Andre 3000. His previous work includes surrealist portraits of Bob Marley in which his skin tones are transformed into a rainbow of colors, Eddie Murphy and Arsenio Hall in their Coming to America costumes, and Malcolm X holding an iPhone (titled "Know Thy Selfie").

Though Smith is showing the collection Friday, he'll continue to add to it. It is a work in progress.

When it comes to all the attention, he finds it, like his artwork, surreal.

"I've been walking a lot outside and trying to let it not get to my head," he says. "This is just beginning."