MORE Philadelphians are living in poverty today than a decade ago, and the city's median household income has plummeted, according to U.S. Census Bureau estimates being released today.

This comes even as there are more city residents who have their high-school diploma or GED, and more who have a bachelor's degree.

The rise in poverty and the drop in income are especially stark among the city's African-American residents.

The new estimates tell "us that Philadelphia is a pretty harsh place to grow up," said Mariana Chilton, a professor at Drexel University's School of Public Health and a national expert on hunger. "While we've made enormous strides" in economic-development and higher-education efforts, "we somehow let the shadow of poverty exist in the city and expand." 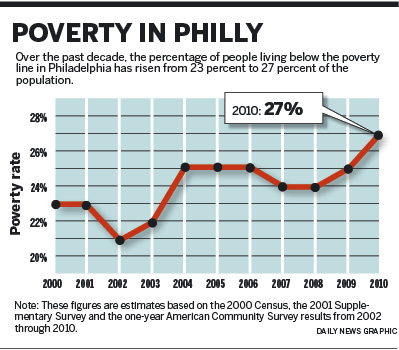 "People need to look in the mirror and ask what they are doing to relate to people who are in poverty," she said, urging a radical change. Individuals can reach out as tutors or get their churches or businesses involved; businesses need to provide better pay; and the city needs more programs to help the poor, she said.

The new estimates come out of the 2010 American Community Survey results released today for places with 65,000 or more people. It is the first time 2010 data are available for cities like Philadelphia on a host of socio-economic and demographic measures, including income, poverty and educational attainment.

The results come on the heels of last week's stunning news that nearly one in six Americans nationwide, 15.1 percent, were living in poverty last year, according to the census' Current Population Survey estimates. The total number of Americans living in poverty, 46.2 million, was the most since 1959, the first year for which poverty figures were available.

Today's American Community Survey data show that 27 percent of Philadelphians reported living below the poverty line in 2010 compared with 23 percent in 2000 census estimates.

African-Americans, who comprised about 42 percent of the city's 1.5 million people last year, and who outnumber other racial or ethnic groups, were hit especially hard. About 31 percent of the black population was living in poverty last year compared with 29 percent in 2000.

Median household income for black residents plummeted 21 percent to about $27,000 last year from a decade ago.

"Yes, it is the recession and the bursting of the housing bubble," but Philadelphia had a large number of people in poverty even before the economic downturn, Chilton said.

The city's "persistent poverty rate," Chilton said, "was intolerable before the recession. And now it's astronomical."

Whites also saw an increase in the poverty rate from about 13 percent in 2000 to 17 percent last year. The median household income for white residents slid 6 percent to about $45,000 last year compared with a decade ago.

The poverty rate among Hispanics and Asians, who represent smaller but growing segments in the city, remained about 42 percent and 30 percent, respectively.