Sam Donnellon: Win over Cowboys could make any Eagles fan believe in Santa

WHERE WERE the pigs? You know - the ones in the sky, the ones that fly around on days when too many strange and unexpected things happen in too small a window of time? Where were they yesterday when the Eagles took the field at 4:15, somehow with a chance to make the playoffs after all? Where were they when Chris Clemons, a backup defensive end, one-hopped a fumble and rumbled 73 yards for a touchdown early in the second half? Where were they when Joselio Hanson picked up another fumble and ran 96 yards for a touchdown a few minutes later?

"This is one of those things where you've got to still be asleep," Sheldon Brown was saying after the Eagles finished off a string of improbable outcomes yesterday with the most improbable one of all:

A playoff spot, after all they've been through.

After all they've put you through.

He doesn't know. You don't know. One Sunday after the Eagles walked off the FedEx Field in utter disgust over a 10-3 loss to Washington - "screaming," in the words of owner Jeff Lurie, at losing control of their own destiny - the Eagles ran onto their home field like furloughed prisoners yesterday, with one last chance to redeem this maddeningly uneven season.

Some players knew that Tampa had just lost and Chicago was about to. Some said later that the volume of the crowd at Lincoln Financial Field told them they were playing for something. Some said they didn't need any of that, that playing Dallas was enough, but that was as hard to believe as the absence of flying pigs.

"I was watching all three games," Lurie said. "Kind of pingpong eyes. But focusing on Tampa the most . . . "

Tampa had to lose at home. To Oakland, which was 4-11 going in. Chicago or Minnesota had to lose. Both almost did, but the Bears' loss to Houston, another nonplayoff team, was more unlikely than a Vikings loss to the Giants would have been.

And then the Eagles had to beat Dallas. That alone seemed a stretch, given last Sunday's dismal zero-touchdown performance against the Redskins.

"Last week, I don't even remember that now," Brown said. "What team was that?"

Got me. Got you, too. Got the owner, truth be told. Someone asked Lurie if he expected to be standing there with a smile on his face at the end of the day. 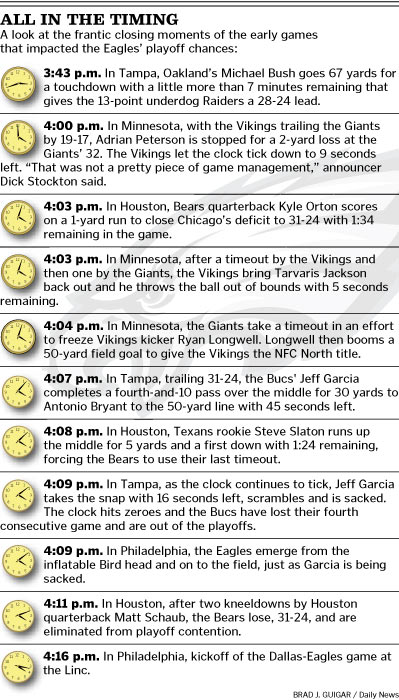 "No," the owner said. "I don't think anything more needs to be said about that. Our chances were not great . . . "

The Eagles took the field literally seconds after Tampa's Jeff Garcia was sacked on the game's last play. The first quarter finished normal enough, the teams trading field goals, but normalcy ended soon after that. Correll Buckhalter was released from solitary confinement. The Eagles ran the ball far more than they passed (36-21). Donovan McNabb showed touch, guile and created at least one huge play with his feet.

The Birds pushed to a 10-3 lead on three straight running plays from the 6. They took a 17-3 lead with 2:03 to go in the half via a 70-yard drive that included six running plays. They pushed to a 24-3 lead after Brown returned an interception 23 yards to the Dallas 42.

It became 27-3 after Pacman Jones was stripped of the ensuing kickoff with 6 seconds to go, and David Akers converted the second of his three field goals. "I'm still thinking we've got 30 minutes to play," Brown said. "And crazy things can happen."

They did. The Eagles' defense returned those two fumbles for touchdowns. A 27-3 lead quickly became a 41-3 lead. The Cowboys turned the ball over five times. Tony Romo was sacked three times, but he was hit incessantly throughout the game. Brian Dawkins stripped him twice. Trent Cole never stopped coming. Blitzes came from everywhere, and they created repeated havoc.

You have days like this in professional football once in every . . .

"I've never seen anything like it,'' Eagles punter Sav Rocca said. "Everything was perfect . . . "

Except for one thing.

The flying pigs were missing. Right to the end.

The way Romo's day went, a few might have knocked him down, too. *

For recent columns, go to http://go.philly.com/donnellon.