I tried all the pumpkin spice things. It was basic(ally awful)

It's 10 a.m. at the Bath & Body Works at the Springfield Mall, and I'm staring into the abyss. I'm faced with a choice no woman should have to make. Will I spend the day exuding Salted Caramel Pumpkin or Marshmallow Pumpkin Latte? Pumpkin Apple Cider or Caramel Pumpkin Swirl? Pumpkin Pecan Waffles? Pumpkin Pie? Or an understated Pumpkin Spice?

I settle on Sweet Cinnamon Pumpkin hand lotion and an allover spritz of Pumpkin Cupcake body spray. A cloud of vanilla, cinnamon, and burned sugar, with top notes of quiet despair, settles over me. It is just the right fragrance for my pumpkin spice day. 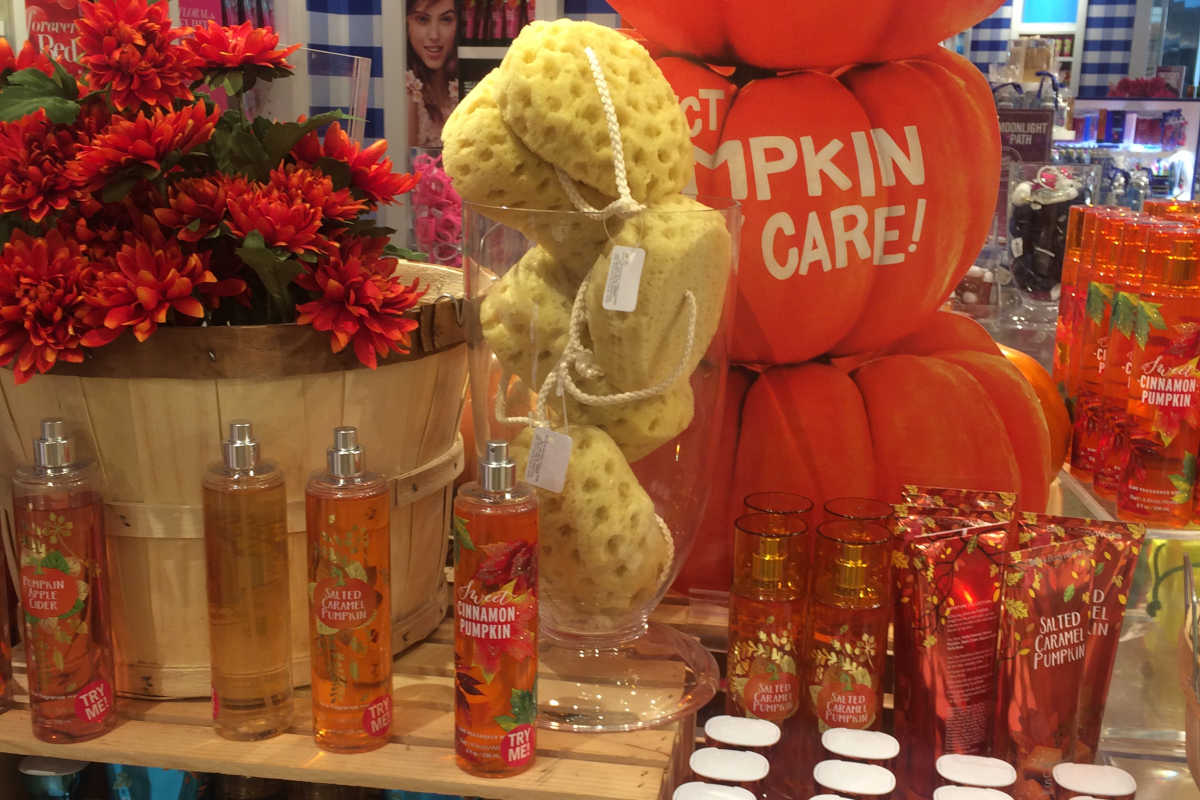 Bath & Body Works laughs in the face of those who believe pumpkin spice is a flavor to be consumed and not covered in, head to toe. On a scale of zero to basic, this falls somewhere between Target and Uggs.

The Pumpkin Spice Latte - PSL, to you - is on its 13th season at Starbucks, where it is the most popular seasonal beverage ever. And evidence of the pumpkin spice ascendancy is everywhere.

Pumpkin-spice food alone was a $361 million market in 2014, according to Nielsen. And, in Philadelphia and beyond, it's moved beyond coffee shops, to food and beer specials, pedicures and facials, candles and lotions, and just about every supermarket aisle. It's even having a fashion moment, with pumpkin-colored Proenza Schouler right on down to H&M.

This food trend has crossed over to social signifier, in a way other trends (like, say, sriracha) have not. The PSL is an emblem for the "basic" individual, one who unironically embraces mainstream tastes. It's marketing gimmick-turned-cultural phenomenon.

But, I have a confession: I've never actually had a PSL. So, I've decided to spend a day immersed, putting cinnamon and nutmeg where they have no business being. I want to know what PSL mania is all about. Will it really be a cozy fall sweater for my soul? Can it convert me into an autumn enthusiast? Does everything really go better with pumpkin?

Spoiler: It does not. I have tasted the zeitgeist, and it is not to my liking.

I set out armed with a pumpkin wish list, and a jar of McCormick Pumpkin Pie Spice as backup.

I neglect to pack insulin. That proves a mistake at my first stop, Dunkin' Donuts, for pumpkin coffee and doughnut holes, touted as a "taste of fall." According to McCormick & Co., pumpkin spice is cinnamon, ginger, nutmeg, and allspice. Dunkin's definition seems to center on cinnamon and corn syrup. Though, if pumpkin means orange-colored, the doughnuts are on point.

I leave this in my car, (which will never not smell like pie again), and venture to Fresh Grocer, in search of pumpkin items I'd consider food. 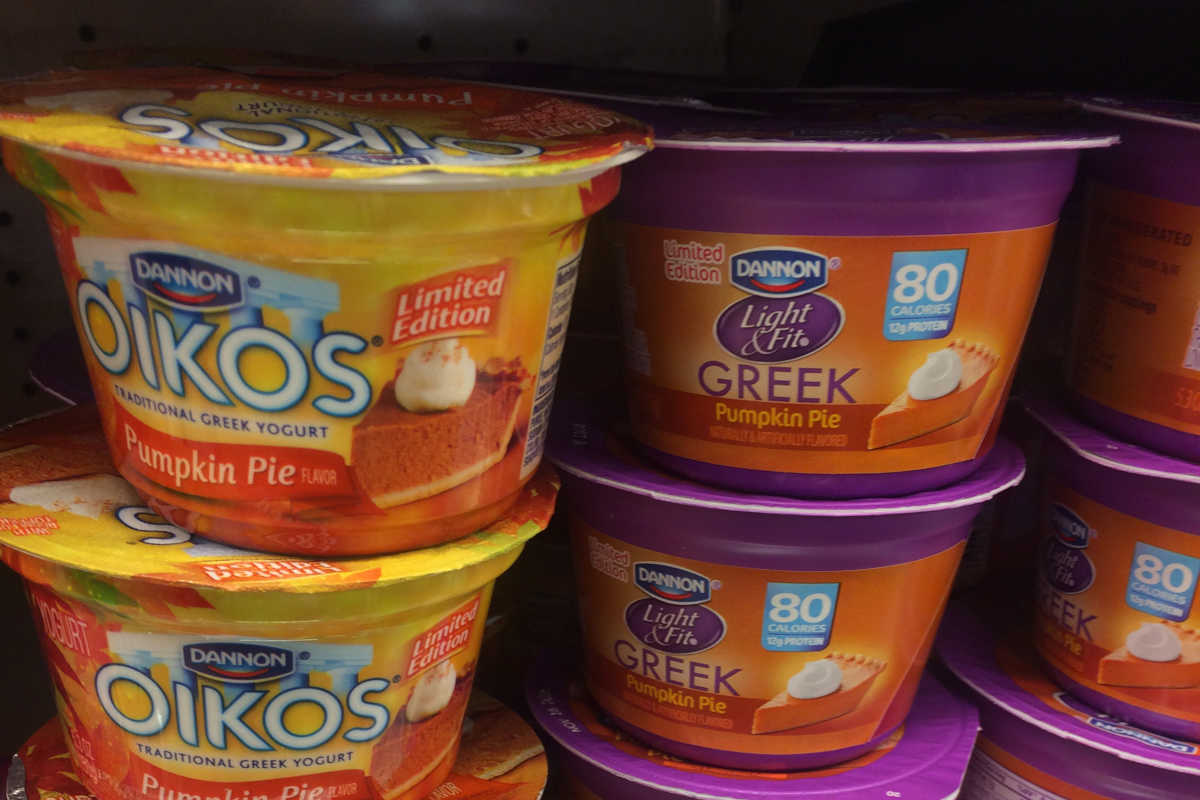 Some would say pumpkin spice has no business in the yogurt display. Fresh Grocer in West Philadelphia dares to disagree.

But the great pumpkin's reach goes beyond food.

I stop in at Yankee Candle, where I waver between Pumpkin Pie and Spiced Pumpkin. A clerk tells me Spiced Pumpkin is the No. 1 fall fragrance. ("But I don't like either of them," he confides. "Apple Pumpkin is my personal favorite!")

I head to The Nail Bar in Newtown Square, where the fall special is a pumpkin pedicure involving oils, lotions, and scrubs intended to make my feet smell less like feet and more like ... pie?

Sue Jones has been doing pumpkin pedicures for two years, mostly between Oct. 1 and Christmas. "When we first came out with it, it was like: every day, pumpkin," she says. 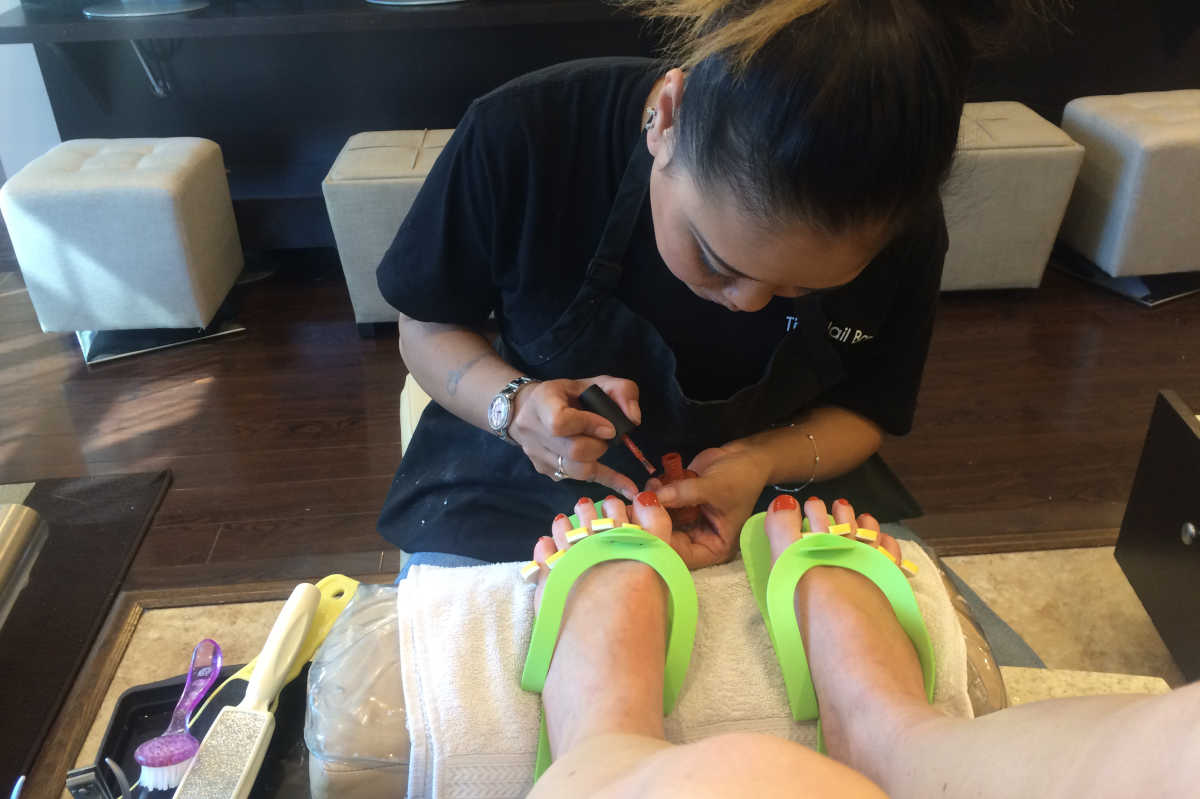 Sue Jones undertakes a pumpkin spa pedicure at the Nail Bar in Newtown Square. From October through Christmas, the place basically smells like the inside of your Starbucks cup.

On a scale of zero to basic, the treatment ranked somewhere between Diet Coke and yoga pants. Was it particularly autumnal? No. Was it a pedicure, and therefore amazing? Yup.

I'm tempted to quit on this high note, but I have demons to face.

Namely: a pumpkin patty melt with chipotle pumpkin puree, which the bar Lucky's Last Chance in Manayunk has made its October "burger of the month." 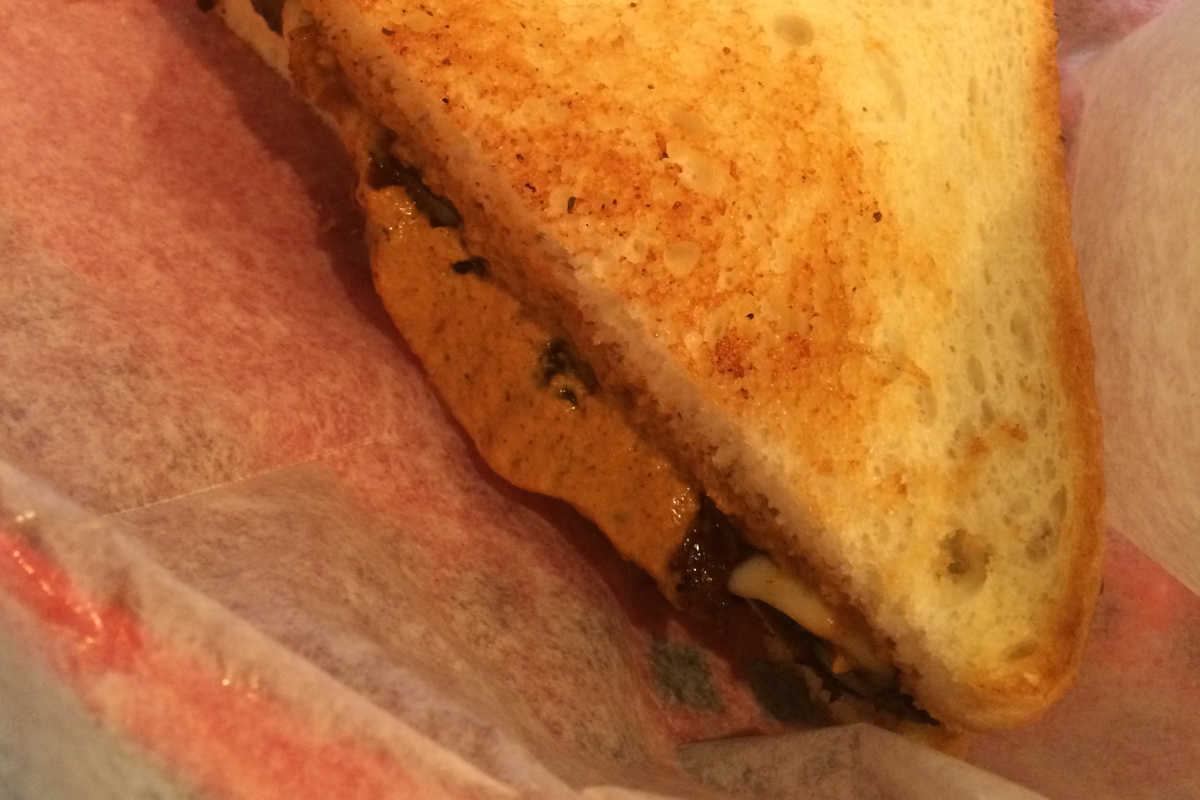 I split it with a colleague, and it exceeds our (admittedly low) expectations. The mac-and-cheese we ordered on the side, however, is pretty bad. But, here's where that Pumpkin Pie Spice comes in. It greatly improves the cheese sauce, and doesn't hurt the patty melt.

Should it have a place on every table, alongside salt and pepper? Maybe so. (But probably not.)

I'm meeting Sean Bauer, a 26-year-old Philadelphia photographer who published a photo of himself outside Wawa in August, holding a sign: "Stop Premature Pumpkin Spicing." It went viral, spawning dozens of news reports. Several implied he was protesting in earnest. 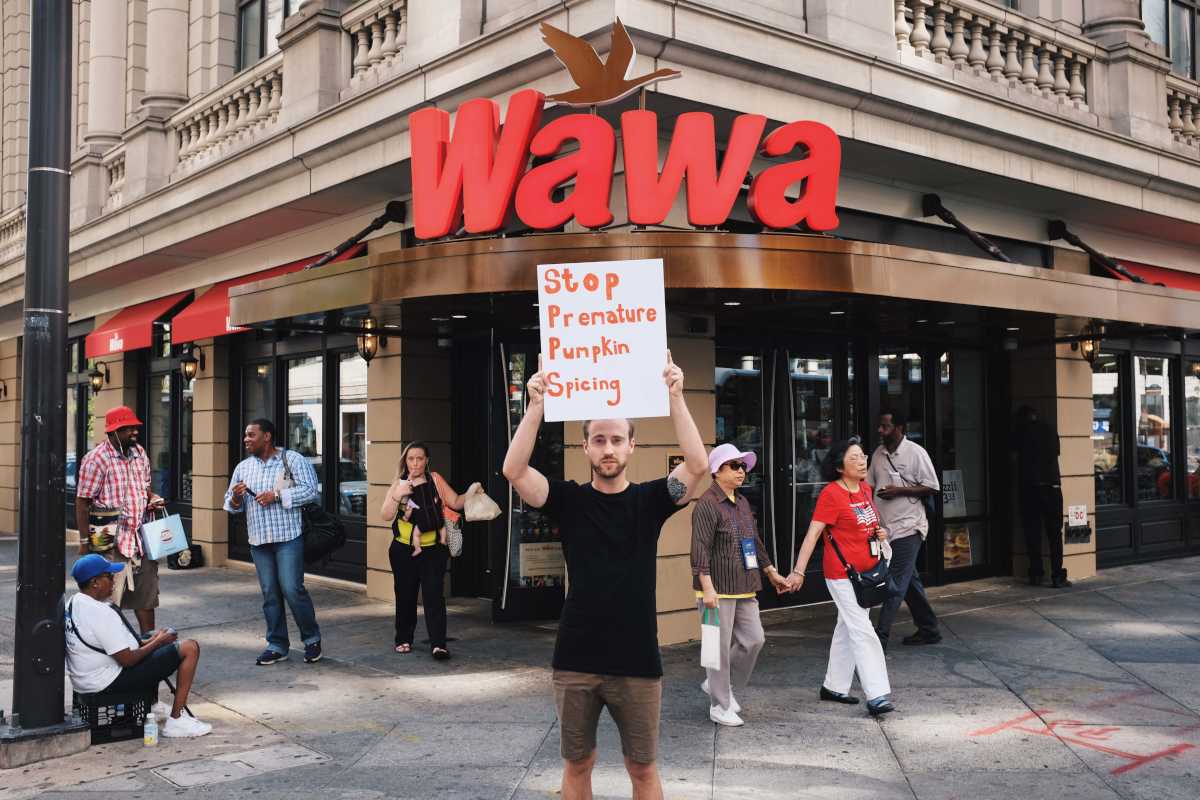 Bauer, who takes his PSL with coconut milk (he's off lactose), doesn't hate the drink. He just thinks it could be better. "I'd rather have something without this fake flavoring," he said.

As I take my first sip of PSL, piled with whipped cream, I can't disagree. Should this 380-calorie cocktail - with the fat-sugar-salt trifecta that's been shown to trigger food addiction - really be the embodiment of fall in America? Couldn't we replace #psl with something more wholesome: #leafpeeping, #walksinthewissahickon, or #applepicking?

I leave thinking of ways to celebrate the season that won't leave me with a slight stomachache and caffeine jitters.

But, first, I have one last stop to make. I enter Trader Joe's - and find myself in the heart of darkness. 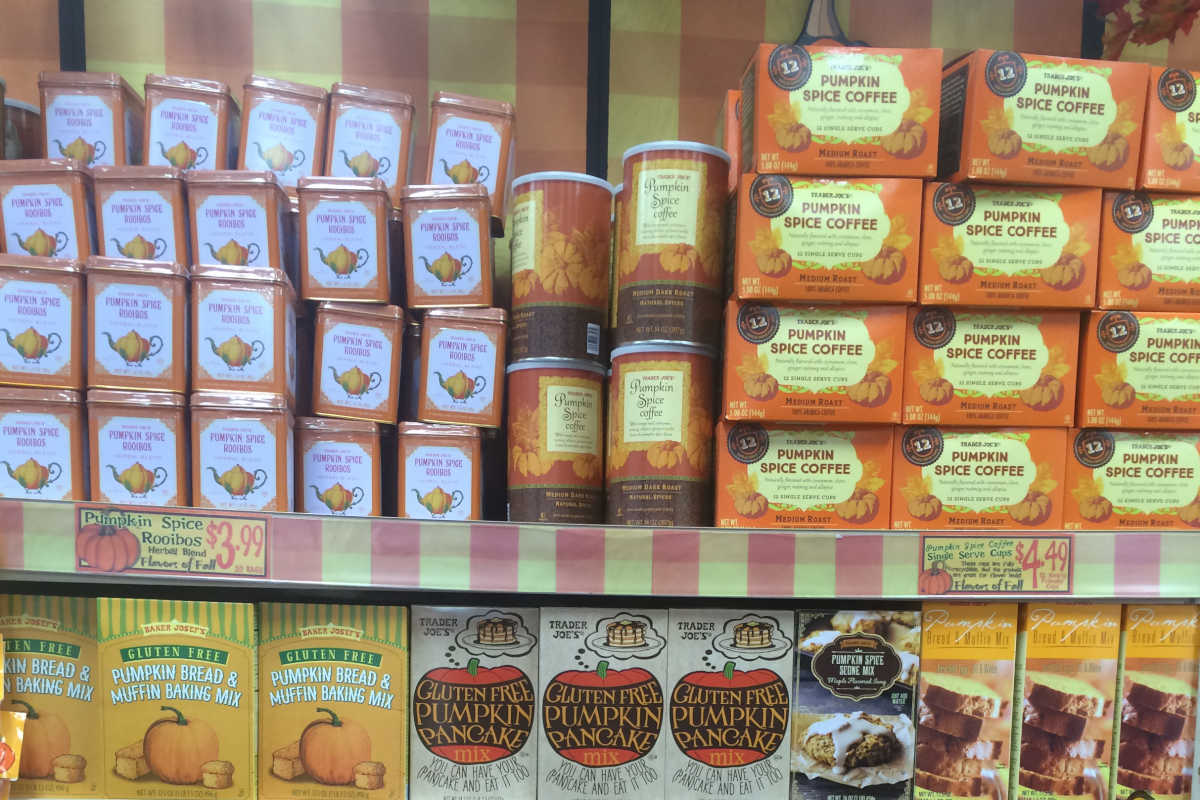 The horror! At Trader Joe's, it's a true pumpkin-spice reckoning.

Actual pumpkins line the entryway. A bright-eyed man offers me a pumpkin tortilla chip (for those times when you can't decide between Tostitos and Cinnamon Toast Crunch) doused in harvest salsa. It's a pumpkin siege: there's vinaigrette and pancake mix, toaster pastries and oatmeal, bagels and biscotti. I count 27 products before I retreat.

I calm my nerves over a Dogfish Head Punkin Ale.

Craft beer is one area where the pumpkin offensive may be crumbling. Forbes reports breweries cut back after sales slipped last fall, leaving pumpkin beer languishing on shelves into spring.

"Unlike other seasonal beers, it has a real universal appeal. It's in our American psyche, pumpkin pie," Grady said. On the other hand, "I don't think brewers necessarily love a pumpkin beer."

At 2nd Story, they brew just enough to last into November. But, she said, "We desperately want it gone by Thanksgiving."