Outside Charleston, three acres of Vietnam lives in South Carolina

by John Bordsen, SPECIAL TO THE WASHINGTON POST, Posted: December 15, 2017

In the light Lowcountry rain and high heat of late-summer South Carolina, bamboo was growing just outside the fenced perimeter of a three-acre addition to Patriots Point Naval & Maritime Museum near Charleston.

Above a mix of military equipment and drab-painted plywood buildings surrounding the compound, mounted speakers punched out the screeches of jungle birds and the droning chirps of crickets — along with the muffled booms of far-off artillery shells and the whoomp-whoomp-whoomp of helicopter blades.

None of it was foreign to Ray Tanner, a wiry 74-year-old who had recently moved back home to Cades, a hamlet about an hour north in the Palmetto State. To him, the clamor of incoming Hueys was the best sound he had ever heard.

"I looked for it," he said, his shirt bearing the crest of the Army's 1st Battalion, 7th Cavalry Regiment. "It meant they were getting us out of here."

"Here" was wartime Vietnam. And a half-century later, he was walking through a re-creation of it, a permanent exhibit called Vietnam Experience.

Tanner was a radio operator who did 11 months in Vietnam. He was a forward observer whose battalion spent 2½ days in the Ia Drang Valley in late 1965. Ia Drang, in the Central Highlands, was one of the first battles in Vietnam that featured large American units. It was the subject of "We Were Soldiers Once . . . and Young," a 1992 best seller and a 2002 movie.

"There were 64 killed," Tanner said of his battalion, "but nobody was left behind." 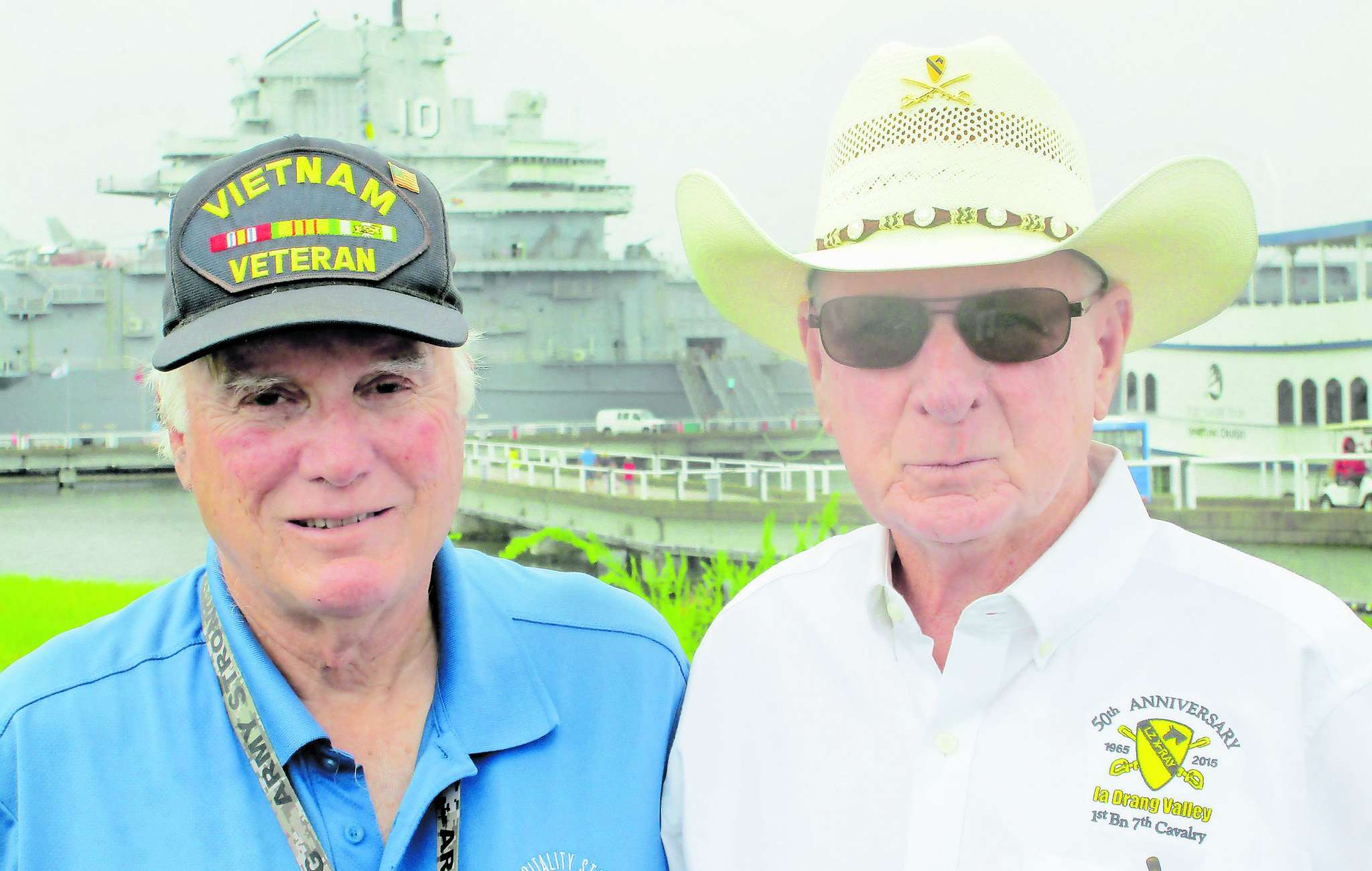 A focus on people

Patriots Point is a major Charleston attraction operated through a state agency of the same name. Its centerpiece is the USS Yorktown, the famed World War II aircraft carrier decommissioned in 1970 and relocated to Mount Pleasant five years later.

Linked to Charleston by the stunning Arthur Ravenel Jr. Bridge and directly across the Cooper River from tourist-choked downtown landmarks, shops, and restaurants, the complex is a draw for veterans, their families, and school groups. A submarine and a destroyer are also permanently moored at Patriots Point.

Vietnam Experience, which opened in 2014 on formerly undeveloped land behind the warships, is included in Patriots Point's admission price. Many cities and states have Vietnam memorials; the Vietnam Veterans Memorial in Washington has spawned permanent and touring Wall replicas. But the walk-through Vietnam Experience — portraying a Mekong Delta naval support base and a Marine Corps artillery base in Khe Sanh — is a tourism outlier. Still, Dick West, 72, who runs the volunteer program at Patriots Point, says 2017 attendance was expected to top 300,000. Like Charleston, it attracts visitors from across North America, Europe, and Asia.

Overseas conflicts great and small are hard to physically project beyond museum dioramas. Factor in the enduring home-front division over the Vietnam War, and Vietnam Experience could seem a marketing land mine.

But the exhibit steers clear of controversy: The timelines avoid politics and strategic second-guessing, and instead focus on what American grunts went through.

You don't hear brass-band patriotic tunes emanating from the replica barracks. It's "Born to Be Wild," "Green Tambourine," and other hits that were audio touchstones to home from a distant and dangerous jungle.

Large relics include a shallow-bottom "brown water" patrol boat, choppers (including two Cobra gunships), field artillery, and a Viet Cong dugout. A Quonset hut displays M-1s and other rifles, maps, and other paraphernalia. The Quonset and a building toward the back hold small theaters that loop footage about Americans in Vietnam. Roughly 2.7 million of them served there; about 58,000 were killed in action.

Veterans and their families are core visitors to Vietnam Experience. There is a strong sense on the grounds — via signs and spectator comments — that this is a belated welcome home for those who returned from the fog of war to find no parade. "Thank you for your service" is a frequent call-out to seniors whose caps or clothes mark them as vets.

So, the best way to see Vietnam Experience is with someone who was on the ground in Southeast Asia.

Tanner strolled the property with the soft-spoken West. Their hitches in Vietnam were quite different.

A country boy who could hunt, Tanner was prime enlistment bait. West was in Army ROTC while studying engineering at the University of Florida.

Tanner was in trenches, facing incoming fire. West served in 1969 as a first lieutenant in an engineering group, the U.S. Army Engineer Construction Agency, often heading to military construction sites in a low-flying, twin-engine Beechcraft — an easy target.

Tanner climbed the wooden observation tower in the exhibit's Delta area and handled the .50-caliber Browning mounted there. If you pull the trigger, you'll hear a recording of machine-gun fire. From the tower platform, the top of the nearby USS Yorktown can't be seen; only the peak of the distant bridge rises above the dense tree line.

West and Tanner found common ground on their walk. The choppers and equipment were familiar, as was the back acreage set up as a Marine fire base at Khe Sahn, the remote outpost that was a scene of fierce fighting in early 1968, just before and during the Tet Offensive.

Aside from a tipped-over tank, the fire base mock-up is set before that event. The vets discussed the different ways that barbed-wire perimeters were built; they smiled at the counter in the primitive PX and its limited supply of 1960s chewing gum, soft drinks, and Playboy magazines. They appreciated the outpost's raised plank walkways, which were easy to build and kept you above the ever-present mud. They agreed that the latrine was an accurate reproduction and that the worst duty you could pull was having to top a filled metal barrel with diesel fuel, light it and wait until the contents were reduced to ash.

One plywood building holds a small cinema where a hologram of a Marine sergeant warns of increased enemy activity around Khe Sahn. The image fades and a screen erupts with a montage of archival battle footage and big-volume sound. It is terrifying.

Tanner and West waited outside; they had seen it before. This show is not for everybody: Signs warn that even veterans may not be able to handle it. Patriots Point, sensitive to the hazards of post-traumatic stress disorder, has similar advisory signs posted throughout Vietnam Experience.

In the interest of healing, Patriots Point provides the Ralph A. Johnson Veterans Affairs Medical Center in Charleston with no-cost tickets, and the exhibit is used by the hospital for repeat-exposure therapy. Patients arrive and leave as they wish, melting into the crowd.

"When we incorporate Patriots Point into therapy, it is often a challenging and potentially very healing experience for those with combat PTSD," psychologist Ashley Hatton said.

After his service,Tanner returned to his native South Carolina and worked for 28 years in Charleston as a transportation manager for a utility. His first visit to Vietnam Experience was shortly after it opened, when he was organizing a reunion for vets.

"I had no apprehension at all," Tanner said. "When I'm there with vets, I'm there with some of our own. We talk about that  now. Before,  nobody ever asked me about Ia Drang, and most of us put it behind us. Now, I'm at an age when I don't mind talking about it. I look at it differently now."

Tanner has been involved in organizing veterans reunions for 25 years. "We don't sit around and tell war stories; we're like family," he said. "The people I knew over there were cohesive. We always liked one another."

A walk-through always triggers one emotion, Tanner said: "I feel pride in the recognition that we were really good soldiers. That's something 'We Were Soldiers Once' helped start to make clear."

West and Tanner were still comparing notes as they headed back to the Patriots Point gate. They agreed that uniforms were always wet in semitropical Vietnam, and that one of the easiest ways to dry them was to hold them up to the exhaust pipe of a chopper.

"The uniforms were unique to the jungle," West said. "They were built to last a year. When yours began to fall apart, you knew your time there was almost through."

Hilton Garden Inn
300 Wingo Way
843-606-4600
hiltongardeninn3.hilton.com
This well-maintained, six-story chain option is a five-minute drive from Patriots Point and downtown Charleston. Higher rooms offer great views of the Cooper River. Rooms from $129.
The Old Village Post House Inn
101 Pitt St.
843-388-8935
oldvillageposthouseinn.com
A charming, six-room historic-district inn that occupies a building that was a post office in the 1800s. Rooms from $200.

The Old Village Post House Inn
101 Pitt St.
843-388-8935
oldvillageposthouseinn.com
The short dinner menu in the inn's elegant, first-floor restaurant accents regional appetizers and entrees, including oysters, flounder, and quail. There is a small, comfy bar in the back and more tables outside in a walled patio area. Entrees from $14.
Pitt Street Pharmacy
111 Pitt St.
843-884-4051
pittstreetpharmacy.com
A perfect place to pause for a quick refreshment or bite while exploring the historic district on foot. Its venerable soda fountain serves classic counter fare 9 a.m. to 5:30 p.m. Monday through Saturday. Sandwiches from $2; milk shakes from $2.25.
Red's Ice House
98 Church St.
843-388-0003
redsicehouse.com
Red's has solid fare, as well as ample indoor and creekside deck seating. The west-facing deck also offers great sunset views. Seafood baskets and boils from $7.95.