A 14-year-old boy was killed in a shooting overnight in North Philadelphia that left three other youths and a man wounded, officials said.

by Mensah M. Dean and Joseph A. Gambardello
Updated

A 14-year-old boy was killed in a shooting overnight in North Philadelphia that left three other youths and a man wounded, officials said.

Capt. John Ryan of the Philadelphia Police Homicide Unit said the boy who died was hit in the forehead by a bullet after two shooters took up positions on opposite sides of the 2100 block of North Fourth Street near Susquehanna Avenue around midnight and opened fire, peppering the street with at least 21 bullets.

"They were clearly acting in concert," he said.

Ryan said the youths who were hit by gunfire live within a block of the crime scene and apparently were the intended targets.

"It's probably related to some neighborhood dispute, as it often is with kids this young," Ryan said.

The 14-year-old died about 5:50 a.m. after undergoing surgery at St. Christopher's Hospital for Children, police said. 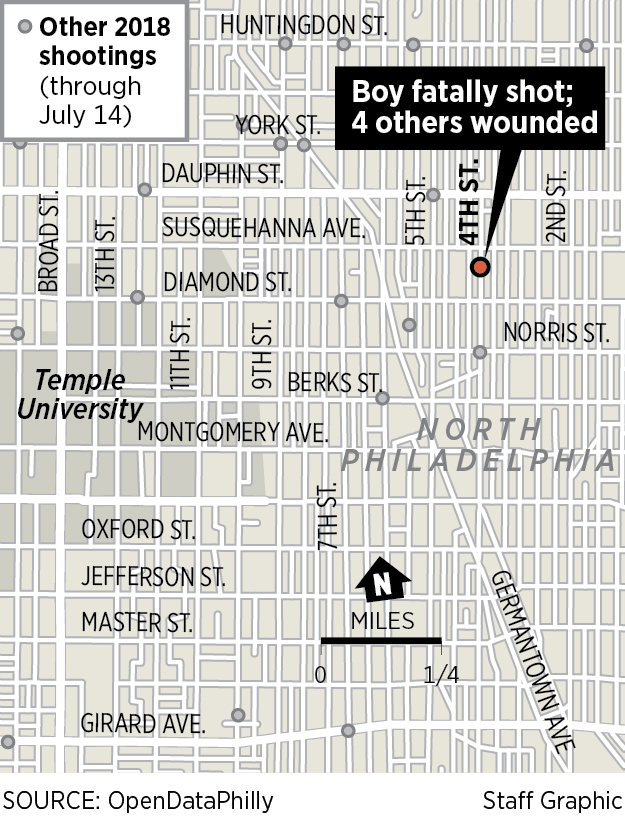 Ryan said a 24-year-old man who was "downrange" from the shooting was hit in the stomach and did not appear to be an intended target. He was in stable condition at Temple University Hospital, police said.

"Our hearts go out to the families, it's a terrible tragedy," Ryan said.

Bullets also slammed into two vehicles on the street.

The four victims who survived are speaking to police detectives, Ryan said. Witnesses also were being helpful, he said.

Chief Inspector Scott Small earlier told reporters at the scene that police may know the name of one of the shooters, but Ryan declined to elaborate.

In the hours following the shooting, several social media users expressed sadness for the victims and their families and questioned why the children were outside at midnight, which violates the city's summer curfew for minors.

Across the city, 80 people have been shot this year, 16 of whom were killed, according to the city's open database.

Mensah M. Dean
I report on law breakers, those they impact, and how the criminal justice system interacts with both. I also write about civil litigation and trials.