For DNC swag sellers, it's both a quick buck and a calling

Gerald Keith, 56, had traveled from Pittsburgh to make a few bucks, and he was offering something for Democrats  of all persuasions. On his hand truck, he had white t-shirts for Hillary Clinton supporters, blue ones for Bernie Sanders and  red for the anti-Trump contingent (tagline: "Dump Trump. Make American Great Again.")

Keith, a car salesman on a working vacation, said he is a Clinton supporter, and not just because the Clinton shirts are his best sellers. "Her ideas for the country. Her stance on equal rights," he said. "But I respect Bernie Sanders. Without Bernie supporters, we can't win. We gotta make sure they feel included too." Just then, Tommie Morado, 31, a Sanders alternate delegate from Odessa, Texas, approached and bought a $15 shirt. "I'm trying to get some Bernie stuff because there are a lot of Hillary supporters here," he said.

The balance between political preference and the irresistible pull of capitalism was playing out across Center City and around the Democratic National Convention at the stadium complex Monday, as sellers of homemade or unlicensed swag displayed their offerings in the form of buttons, t-shirts, flags and even yarmulkes.

The latter was offered by Marc Daniels, 62, of Springfield, Ill., who does business under the name "Weed Out Hate." Daniels has made the Jewish skullcaps for everyone from Ted Cruz to Bernie Sanders, and was selling them out of his apron for $10 apiece. "I was in the New York (delegation) hotel today and I saw [Rep.] Charlie Rangel, and I said I'd like to give you a Hillary Clinton yarmulke," he said. He didn't point out to Rangel that the cap had Benjamin Netanyahu's name on the other side. 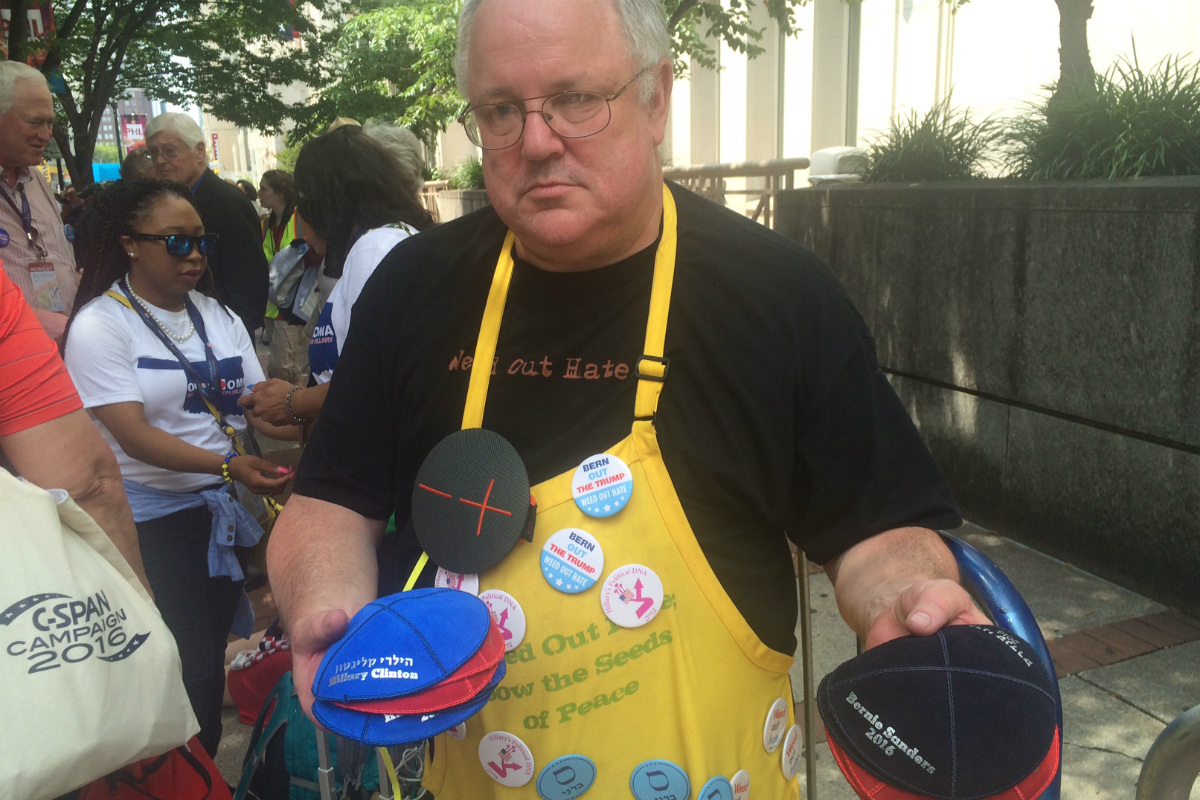 Daniels supports Clinton because of her positive campaign. "Trump wants to demonize minorities and the weak and Bernie Sanders wants to demonize the wealthy. Hillary Clinton is the only candidate who in her heart wants to weed out hate."

Down the street was Bob Wilson, 58, of High Point, N.C. He was selling Clinton buttons, featuring her logo, or her face superimposed over Rosie the Riveter. "I just came for the work," he said.

But Sanders supporters were skeptical.

"How are sales? You should've gone with the Bernie buttons!" David Nepveu, 54, of Hyde Park, Ore., called out loudly. The woodworker flew in with his wife just to  show his displeasure with the DNC and what he called the "rigged" election process.

There were plenty of Sanders wares as well -- including Sesame Street-inspired t-shirts, and marijuana-infused "Burn one for Bernie" variations fit for the Wildwood boardwalk, plus a handful of anti-Clinton shirts that made unflattering mention of Monica Lewinsky.

But several other merchants were hoping to capitalize on anti-Trump sentiment. A man named Ben from Brooklyn -- who was 33 and did not wish to share his last name because he is a "former and hopefully future journalist" -- set up a table selling "No Trump 16" merchandise by the Pennsylvania Convention Center. "We view him as xenophobic, a bigot and a racist," said Ben, who'd brought 2,500 shirts and high hopes to Philadelphia. For him, this is equally a political statement and a business proposition, he said.

Then he turned away, "There's Bakari Sellers," he said. "Hey, Bakari, can I give you a t-shirt?" The politician declined. 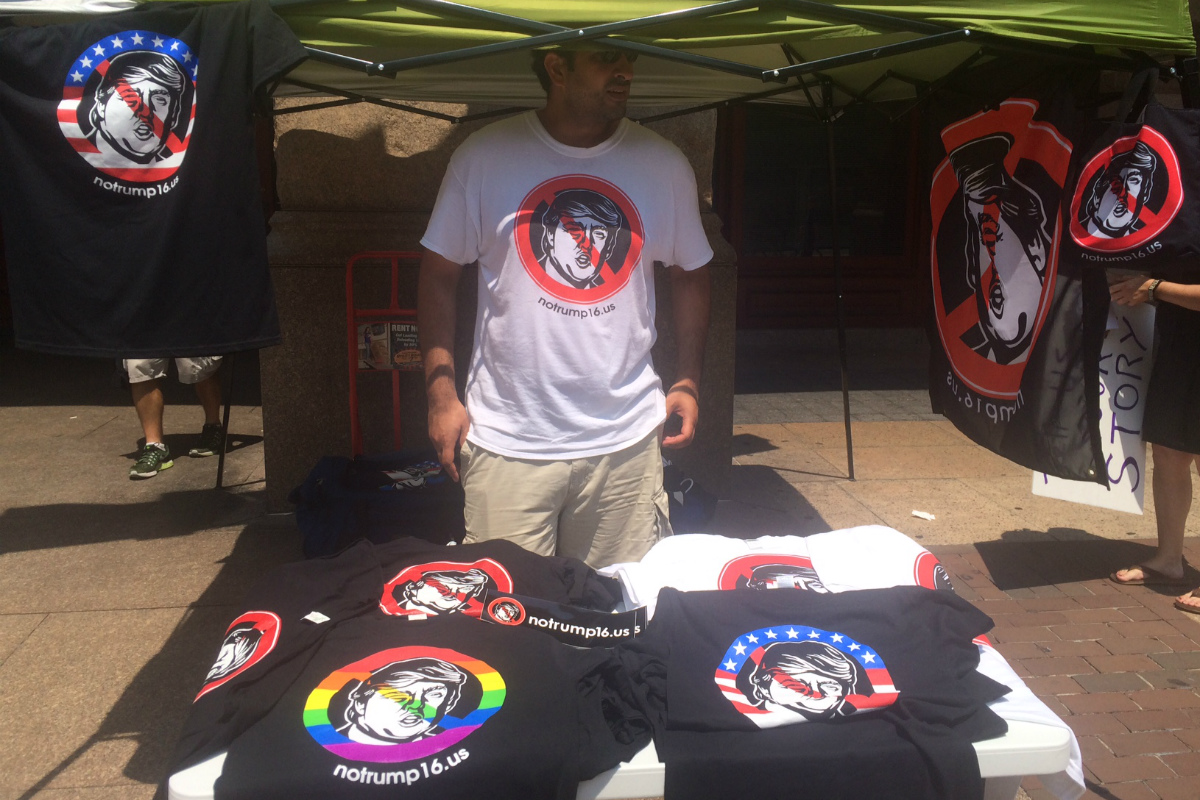 Down by the AT&T Station in South Philadelphia, Venita Kelley, 53, of Dayton, Ohio, was surrounded by protesters who were disillusioned with the Democratic Party and therefore not very interested in her "Get the Trump outta h'eah!" t-shirts at $20 apiece. But Kelley, a communications professor, said she just had to do something about Trump.

"His coded words," she said. "To me, it's easy to read. I'm not interested in having the United States he wants to take us back to." 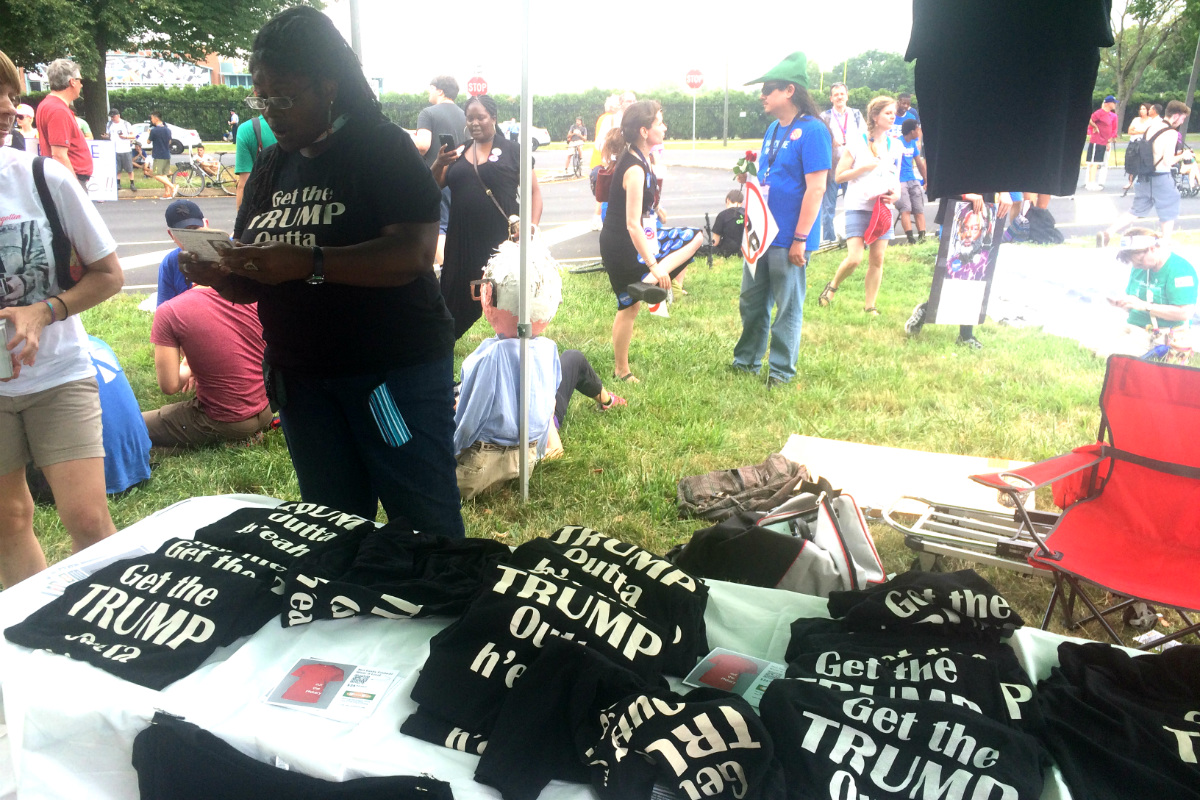 Venita Kelley of Dayton, Ohio, was "ticked off" enough to make a series of "Get the TRUMP outta h'eah" t-shirts. (Photo: SAMANTHA MELAMED / Staff)

Others just want to make a profit. Matt Paine, 46, a construction worker from Bend, Oregon, had come to town with his wife Delia, an artist, to sell her one-of-a-kind Clinton buttons. He was wearing a reflective vest and had bins of the handmade pins strapped to his waist.

"It started as an artistic statement, but now it's a business as well," he said. "These conventions come along once every four years. You have to make the most of it."