Surviving suicide - a personal story of loss and recovery

In the witching hour of a winter night, I sat alone in my kitchen, shoveling cereal into my mouth while tears poured down my face.

My chest heaved, a panic taking hold, and I sobbed into my hands to muffle the sound. Upstairs, my marriage was drifting away and my kids were asleep, the pain in their dad's bleary blue eyes still unknown to them.

Grief was burying me alive at 3 a.m. and I couldn't fight it.

This was last year. The despair had begun about 16 months earlier on a September afternoon in 2013, when my then-wife called and asked if I'd heard from Anthony, my closest friend. He hadn't come to work.

Ten minutes later, she was calling again, crying, incoherent. And 20 minutes later, I crashed my car into the curb outside Anthony's house. People I knew were gathered there, standing at a distance from the black car backed up to the garage. Neighbors peeked out windows. A police car idled. There was nothing left in that black car but flies.

The Saturday before Thanksgiving is International Survivors of Suicide Loss Day. The American Foundation for Suicide Prevention estimates that 42,773 die by suicide per year, and the World Health Organization says each one affects six people. That's probably a low estimate, but even that math means millions live in the wreckage of suicide. People left behind by suicide are at a greater risk for depression, post-traumatic stress disorder, and, yes, suicide.

That's why I'm sharing this story.

Suicide can be a bolt of lightning from the clear blue for some families, but that wasn't the case for Anthony. His life was full of brooding skies and blazing suns. 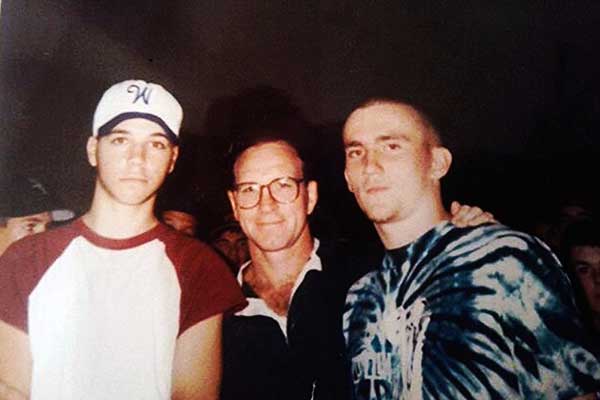 Anthony (left) and the author (right) with former University of Iowa wrestling coach Dan Gable in the summer of 1994.

Anthony and I survived a suicide attempt, together, when I was 17. That night tied us together for life. I was lonely and felt misunderstood then. I smoked cigarettes in parks with Anthony, misquoting French existentialists and reading the wrong poems. One night in 1995, I decided I was too sensitive to plow through a life of heartache. Anthony joined me and together we downed pills with big gulps of vodka. I didn't ask why, but I know now.

When I woke, surprised to be alive, I carried Anthony home, using a wrestling move we'd drilled hundreds of times at practice. I dumped him on my lawn and found my parents in bed.

"You need to take us to the hospital," I said.

As adults our lives took different paths on opposite coasts. I became a frumpy dad and husband who craved comfort at home and peace in the woods. Anthony was the extrovert, living the vagabond life with pretty women on his arm in San Francisco. He had a shadow, though, a compulsion that followed him. Sometimes he had to fake smiles. He never faked anything with me, though.

In 2011, he flew home to New Jersey for a wedding and told me he couldn't fight anymore. This was goodbye. I called his family and sought advice from suicide hotlines. I confronted him at the airport, threatening to cause a scene.

I begged him: Believe there's a little light in all this darkness. He hugged me and promised me he'd return.

Anthony moved back months later, taking a job with my ex and her cousin. He dated and worked out and struggled to balance medication and therapy. We had a long conversation around that time, a debate about life and death. I'd long since read Camus to the end and urged Anthony to embrace the struggle, to roll his boulder up the hill every day as Sisyphus did, then wake up and do it again. 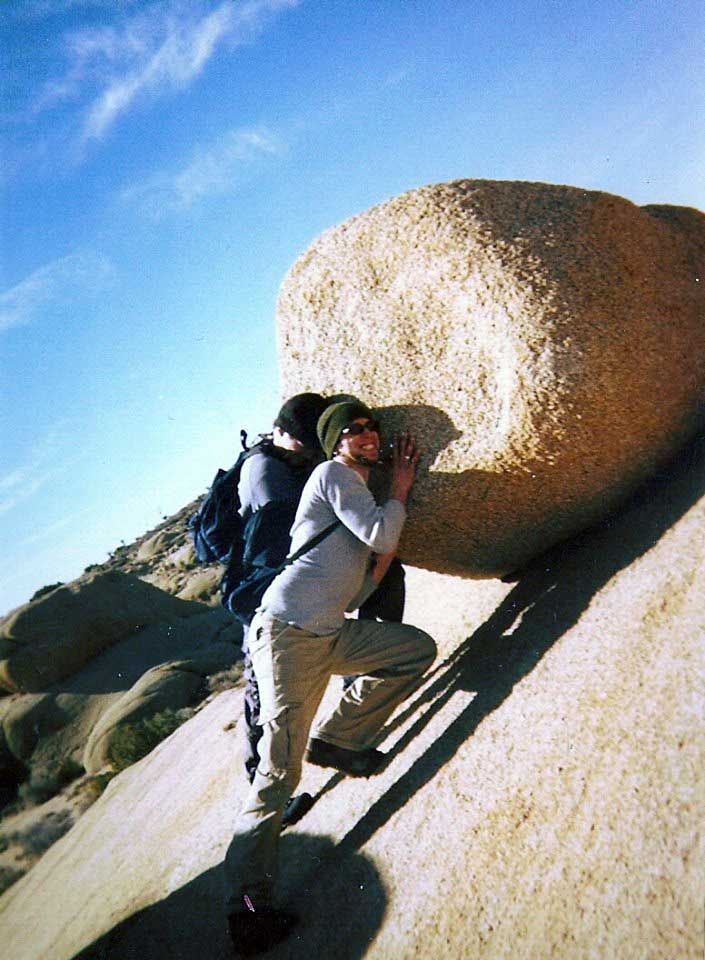 Sometimes I annoyed him with what he called my "positive crap" and other times I struggled to say anything. He knew this, and told me I'd be happier without him.

"You will never get or understand what it feels like to be me," Anthony wrote in January of 2012. "Sorry. You can't feel the pain I have."

"I know," I replied. "I thought I could, but I can't fully understand it. I want to help you, though."

On the day he died, I paced the sidewalk outside his house, fuming. I didn't cry for a few days.

At the memorial, I sobbed on his mother's shoulder and read a eulogy I'd written. Anthony's life was full, despite this disease, I said. He stayed as long as he could. It may have been the most effective journalism I've ever written.

Then we all went home and I began to feel alone again. Tears would soon rust me out.

My coworkers were kind when I returned, but I took off work sometimes and cried in bed. Sometimes, I'd take off the next day, too. My car became a crucible where I punished myself, replaying regret and guilt over and over during my commute. A friend who was always by my side said I was a broken record. Therapists call that rumination.

I drifted toward stories about suicide, filling my notepad and my void in hushed living rooms of strangers who hugged me. I didn't want them to let go. I spent months collecting details of one broken man, hoping to bring his legacy into the light for people he left behind.

I contemplated a fellowship to study suicide at Stanford and once, on a day off, I met a suicide expert at a Dunkin' Donuts near my house. I wore sweatpants and didn't even take notes.

On Anthony's 37th birthday, in April of 2014, I posted a long letter on my Facebook page that won a lot of likes from friends.

"I feel bound to the belief that you could have beat this, though. If not, I could slip away too," I wrote.

I got involved with the Philadelphia chapter of the American Foundation for Suicide Prevention, trying to slip its fund-raisers into the newspaper and participating in them myself. Garden Logan, the chapter's spokeswoman, would check in from time to time to ask how I was. She'd lost her brother, William, to suicide, so she knew.

In September of 2014, the AFSP held a screening of The Fisher King at the Kimmel Center to honor Robin Williams for Suicide Prevention Month and I brought a friend. Williams plays a man in psychosis after losing his wife and Jeff Bridges feels responsible for his misery. The friendship between those characters triggered my first panic attack and I bit down on it so my friend wouldn't notice.

September was a cliff dive after that, straight into the anniversary of Anthony's death. I attended my first Survivors of Suicide counseling group that month, sitting in a blank room with eight or so people, young and old. Some just sat there silently, their cheeks blooming red. One burly man spoke about his brother and never wiped the tears from his face.

When I spoke, my chest thumped and the room closed in. Most didn't know their loved ones were suicidal, but I did and Anthony died anyway. I said that silently to myself and didn't go back to the meeting. I didn't know what to do after that.

Grief had pulled me out of life and warped my ability to love. If people suggested I move on or "man up," I walled them out of my life. Weekends were mostly spent alone in bed, or with my kids, wrapping myself up in sadness. I couldn't have been an easy person to love.

At my worst moment, in the kitchen on that winter night last year, I felt I'd rather be dead than deal with it. That thought shot like a flare across my blacking mind and I picked up my phone and looked up "uncontrollable grief." That led me to "complicated grief," one of the biggest side effects for survivors of suicide loss. I checked off nearly every symptom and the next morning called a counseling service and changed my life.

Anyone suffering in the wake of a suicide should seek help. There is no shame in admitting you're lost. You don't need to move on from suicide, but you can lighten the load you'll carry. Go to survivors' groups, volunteer with the AFSP, or call a therapist as I did.

On a couch in a quiet room in Center City, I realized all the things I couldn't bear as a teen - my loneliness and my easily bruised heart - have helped me. I was a natural fly-on-the-wall, wary of crowds and cliques and party lines, and that's helpful when you're a reporter. I hurt easily and I'm drawn to people who are hurting too, and that's made me a better writer.

When Anthony said I'd be happier without him, I willed myself into a deep depression to prove him wrong. My therapist gently pried my grip on grief and though sadness still visits me, it's only a guest.

On Anthony's 38th birthday, I wrote him another letter to let him know I was healing and had to let go. Last month, I went to read it again and found my personal website had been wiped out, the content gone. I argued with the hosting service for hours and fired off angry emails. I felt that panic rise up for a moment.

I stared into blank, white space and thought I could save what I lost. The words came back to me, too, but I took a deep breath, and didn't write them down. I was just glad I could remember them. All I really wanted to say anyway was "goodbye."