Skip to content
The future
Fashion Outlets
JPRA Architects
The goal of the renovation is to activate all sides of the three-block-long mall. PREIT plans to install restaurants and food stores on the back side of the Gallery along Filbert Street. The company sees Filbert as a good place to extend the energy of the Reading Terminal Market and Chinatown, and wants pedestrianize the street, creating an intimate, walkable epicurean row. To accomplish such a dramatic transformation, PREIT acknowledges that the bus station and parking garage would have to be improved – or even removed.
Do the renderings of the renovation of Philadelphia’s Gallery shopping mall reflect reality?
Inga Saffron / Inquirer Architecture Critic, isaffron@phillynews.com

We know plenty of facts about the renovation of Philadelphia's dysfunctional Gallery. We know the cost ($325 million). We know what the city and state are coughing up to help the developers realize the transformation ($148.5 million). We even know that the old pushcart vendors have been guaranteed spots in the reconfigured mall.

And yet we know almost nothing about the architecture.

Through months of discussion about the city's financial contribution to the project, Philadelphians were shown only a single hazy rendering of what the Gallery's new Market Street facade would look like after the big white whale of a mall goes under the knife and reemerges as the "Fashion Outlets of Philadelphia."

But based on never-before-seen images and a promotional video that were provided by the developers - Pennsylvania Real Estate Investment Trust and Macerich Co. - it now seems safe to say that the dowdy Gallery will emerge from its surgery looking fresher and more sophisticated. Along with modernizing the '70s-era interior, the images reveal that the developers are exploring ways to transform the massive retail box into the centerpiece of a 24/7 neighborhood. Their ideas include putting apartment towers on the roof and creating a pedestrian-friendly epicurean row on Filbert Street, now the mall's forlorn back wall. 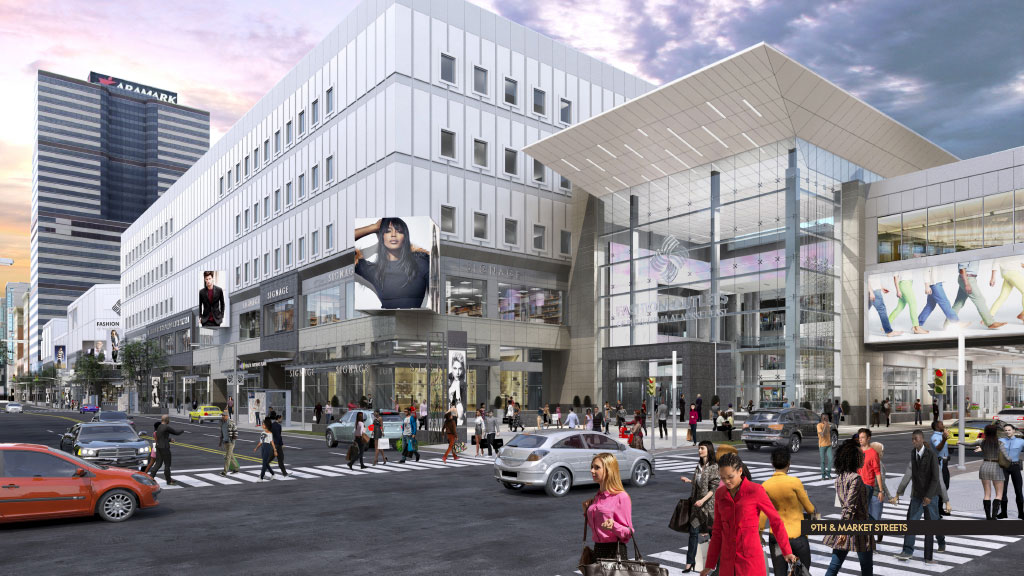 JRPA Architects
PREIT/Macerich are promising the Gallery’s Market Street façade will undergo the most dramatic transformation. The existing amphitheater at Ninth Street will be eliminated and replaced by a sidewalk-level plaza, leading to a streamlined, glass entrance cube designed by JPRA Architects. This rendering shows a new retail space facing the plaza, in what is now an open-air arcade. PREIT wants to break open the Gallery’s blank façade and replace it with a continuous row of shops, each with its own front doors and large display windows. The shopfronts will be trimmed in dark gray granite and a limestone-like material. Most shops will be two stories and have generous second-floor windows. The cubes represent the locations where the digital signs will be placed.

Should these proposals be realized, the Gallery would no doubt become a catalyst to lift up the whole East Market corridor.

Unfortunately, the new images also make it clear that PREIT already has exaggerated how much its problematic building can be improved.

The facade rendering presented to the public in April suggests the mall's solid Market Street walls would be torn off and replaced with a continuous row of two-story shops with large display windows and street-facing doors. But during an interview with PREIT's top executive, Joseph Coradino, and designer James Grigsby of JPRA Architects, they acknowledged that this welcoming frontage is probably impossible to achieve. The truth is that the row of stores will not be continuous. Most of the existing blank expanses on Market Street, and some on Filbert, will remain blank.

Because renderings are intended as a visual sales pitch, they must always be treated with caution. In the Market Street rendering, the mall's new face was presented from a hundred paces, as if someone had drawn the picture from the parking lot at Eighth Street. You can identify a few key changes - a new glass entrance cube, a small plaza, some grayish accents. But make no mistake: Fashion Outlets will be just as much of a mall as the Gallery. 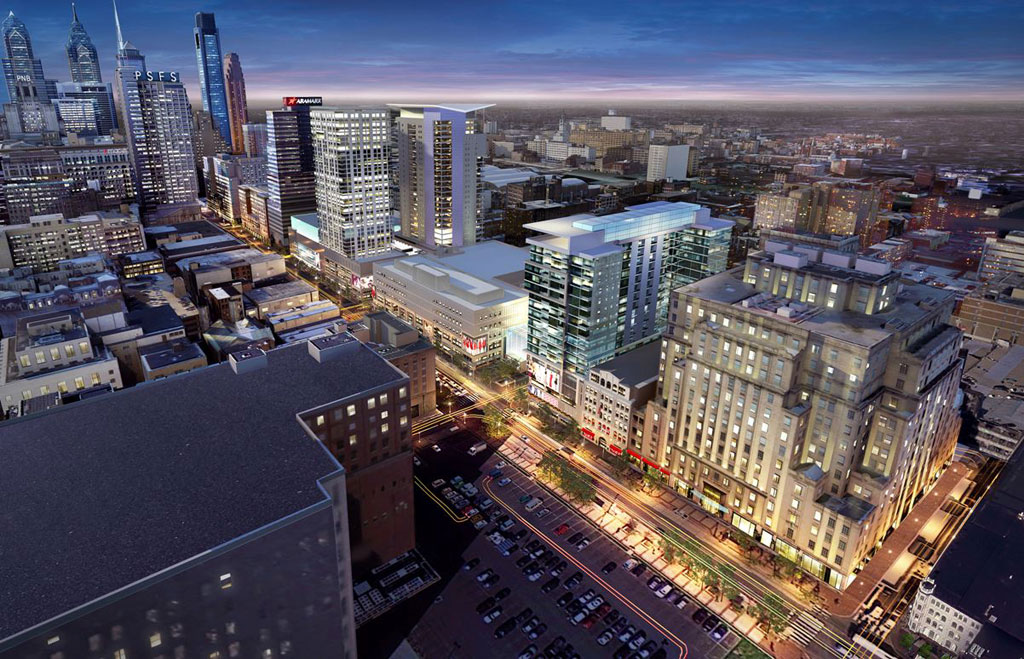 JRPA Architects
The Gallery was built to support several large towers. As part of the mall’s reinvention, PREIT is exploring the possibility of constructing three mid-rise towers on top of the building. The company will start with the eastern-most tower. It is seeking a development partner to construct an apartment house at Ninth Street, with a residential lobby facing Filbert Street. The two other towers would come later.

Of course, nobody expected the Gallery renovation to solve all of the building's problems. Conceived in the '70s, when downtowns sought to emulate suburban malls, the design virtually ignores Market Street. Shoppers were expected to access the mall from the underground trains or through a sky bridge connected to the adjacent parking garages. Although the mall stretches from Ninth to 11th Streets, there are only a handful of shop windows at street level.

PREIT's goal has always been to open up the uninviting facade. By turning the mall inside-out, they believe they can help restore Market Street as a traditional shopping corridor. Because two other Market Street projects - the Lit Bros. renovation and a mixed-use development at 12th Street - are also in the mix, much is riding on the success of the Fashion Outlets. 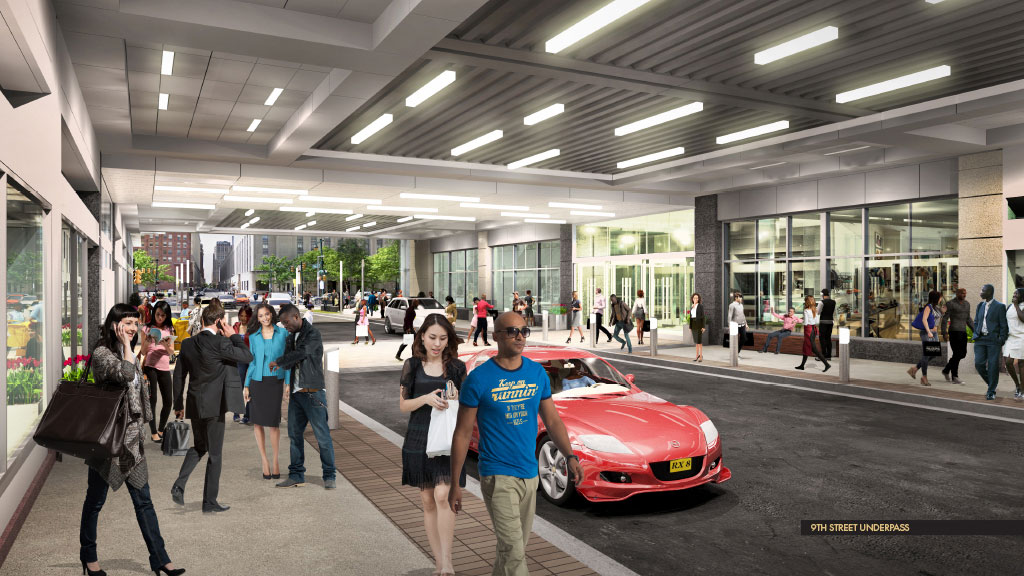 JRPA Architects
Two Philadelphia streets pass under the Gallery, Ninth and 10th. Now gloomy tunnels, they will be brightened with better lighting and improved sidewalk treatments. Walls that are now solid will be retrofitted with large display windows.

As important as it is to make the Gallery feel more approachable, PREIT expects that most of its new tenants - 125 in total - will be located inside the mall. For that reason, it wants to improve the main entrance at Ninth Street.

The plan is to demolish the existing amphitheater, which forces people to enter the mall through its underground concourse. In its place, PREIT will build a street-level plaza, leading to a glass portal. In the rendering of the transparent cube, we see an enticing new retail space spilling onto the plaza.

Alas, it is an illusion.

The problem, PREIT concedes, is that a big chunk of the 12-bay Market Street facade is already claimed by non-retail uses. Take the area immediately west of the plaza. That space is leased by Health Partners Plans. Although its offices are on the mall's upper floors, the company's lobby occupies three storefront bays at street level along Market, two of them blank walls. West of the lobby, there are three more blank bays for the mall's exit doors. Many of the blank walls serve to hide SEPTA's transit infrastructure.

Here’s what PREIT/Macerich are up against: Nearly half the ground-floor façade is taken up by non-retail uses. In this photo SERIES, you can see the entrance to Health Partners Plans, which has offices on the second and third floors of the mall. Two of the bays flanking the doors are blank walls and will remain so after the renovation. Immediately to the west are three more blank bays, occupied by exit doors. Architect James Grigsby says he will use graphics to camouflage the doors if they cannot be removed.

When Grigsby, who led the redesign of the Cherry Hill Mall, was asked how he would deal with those problematic bays, he said they could always be disguised with graphics. If that's the solution, the Gallery renovation will look no better than the exterior of the existing Walgreen's - long expanses of dead space.

PREIT faces a similar challenge between 10th and 11th Streets, where the facade also is consumed by exit doors.

It's too bad because the additional renderings show that PREIT's ambitions go beyond the cosmetic. JPRA's neutral palette and industrial-chic aesthetic suggest the developer envisions a more urbane environment, one that will appeal to design-savvy shoppers as well as bargain hunters.

Coradino said the company is now seeking a partner to help build the first of three possible towers, starting with a mid-rise apartment house on the northeast corner of Ninth and Market. Its plan to make Filbert more pedestrian-friendly, by adding restaurants and food stores, and piggybacking off the popularity of the Reading Terminal and Chinatown, also should help alter our perceptions of that underappreciated side street. 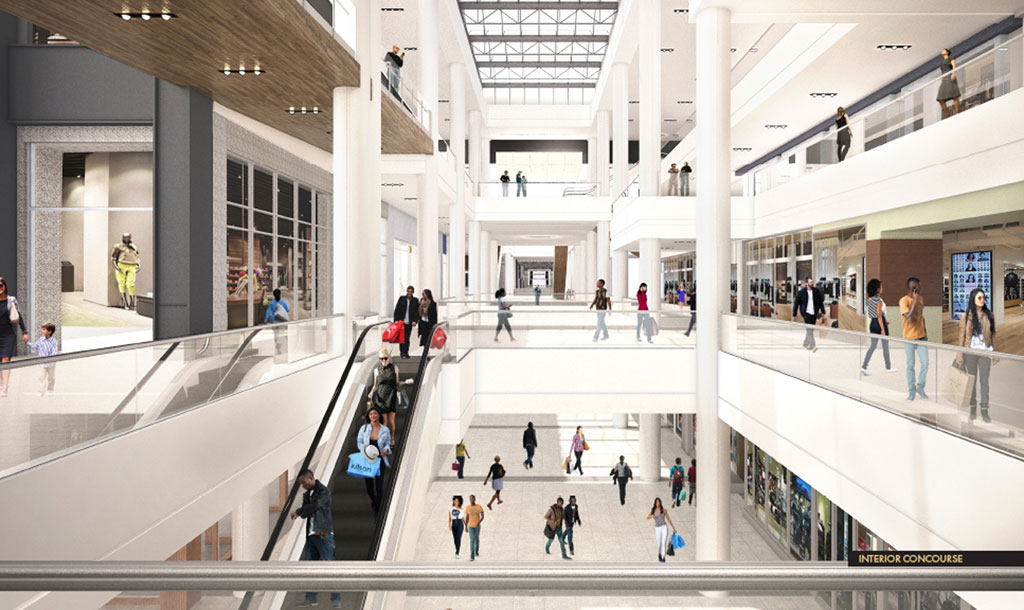 JRPA Architects
PREIT expects to lease space to about 125 tenants, down from the original 150 that populated the mall. Instead of large anchor stores like Kmart, there will be smaller retailers. One advantage of eliminating the anchor stores is that PREIT will be able to create a continuous corridor on the second level, with retail spaces on either side. In keeping with current retail trends, JPRA Architects plans to give the mall’s new interior a neutral palette, accented by industrial-chic materials that evoke steel and wood. The walls will be white, the floors a dark gray.

And yet, with all the focus on upgrading the Gallery's sidewalk appeal, no one has paid much attention to the sidewalks themselves.

To make the Fashion Outlet's new street-facing shops handicapped-accessible, PREIT has asked for permission to annex part of the Market Street sidewalk to build ramps for its new stores. The city should tell the developer those structures belong inside the shops, not in the public right-of-way. 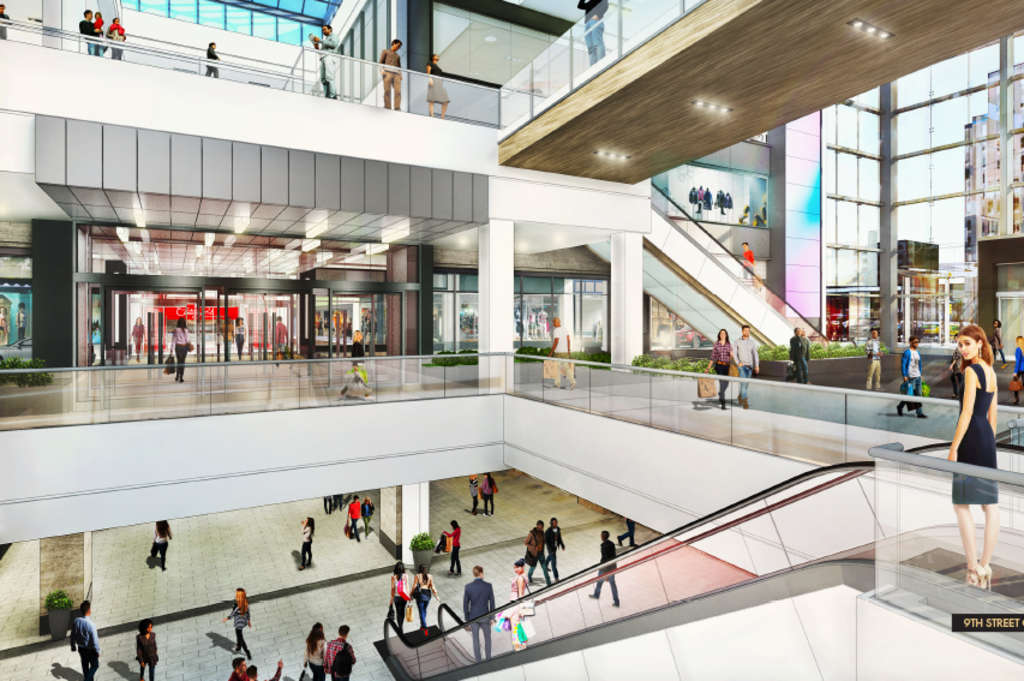 PREIT
After the renovation, patrons arriving at Ninth Street will still enter a soaring light-filled space. But they will find a new set of escalators on the Ninth Street side, leading to the second level. The JPRA design calls for adding several bridges across the central atrium to make it easier to move through the mall. Getting customers to the third floor has always been a problem. PREIT hopes to lure them there by making it an entertainment zone with restaurants, bocce courts, a sports bar and perhaps a movie theater. PREIT also hopes to install a restaurant at street level, on the northeast corner of Ninth and Market, across from the plaza, in the space now occupied by a drug store.

PREIT's treatment of the sidewalks raises another issue. Although Market Street is being remade by the three major construction projects, each one is planning its own set of sidewalk furnishings.

This go-it-alone approach will surely result in a hodgepodge of fixtures on the renovated blocks, while the unimproved blocks will be left with the same broken elements. What we need is a coordinated plan for upgrading the sidewalks from City Hall to Independence Mall. It's not unreasonable to expect such civic-minded improvements given the windfall that Council bestowed on these property owners when it allowed digital signs on East Market.

In the end, we will judge the renovations not by the bargains we find inside the Gallery's sleek new interior, but by how much of the bustling urban streetscape depicted in the pretty pictures actually comes to life.