Skip to content
Oil trains
Scary secrecy
TOM GRALISH / Staff Photographer
Oil rail cars are identifiable by a red diamond-shaped placard on each, with the black number 1267. These seen from the South Street Bridge, along the Schuylkill Banks Boardwalk May 12, 2015.
Philadelphia is a hub in the new oil boom, but a shroud of mystery covers the trains and the safety of their infrastructure.
By Paul Nussbaum / Inquirer Staff Writer

When crude oil arrives at a refinery in South Philadelphia or Marcus Hook or Paulsboro, the refinery must have a public plan outlining the hazards, a detailed response to possible accidents, and worst-case scenarios for disasters that could endanger hundreds of thousands of people.

Not so the trains carrying oil to the refineries.

As they travel past the Children's Hospital of Philadelphia, the Philadelphia Museum of Art, Philadelphia International Airport, along the Schuylkill Expressway, and past thousands of homes, schools and businesses, the oil trains need no public accounting of what they are carrying, or when or where, or what could happen if something goes wrong.

As Philadelphia becomes a major hub in the nation's new oil boom, with about 150 million gallons of highly flammable crude arriving by train each week, a shroud of secrecy covers the trains, their cargoes and the safety of their infrastructure.

Because of explosive oil-train derailments such as the 2013 accident in Lac-Mégantic, Quebec, that killed 47 people, neighbors of railroads want to know more about the hazards that may be rolling through their communities. 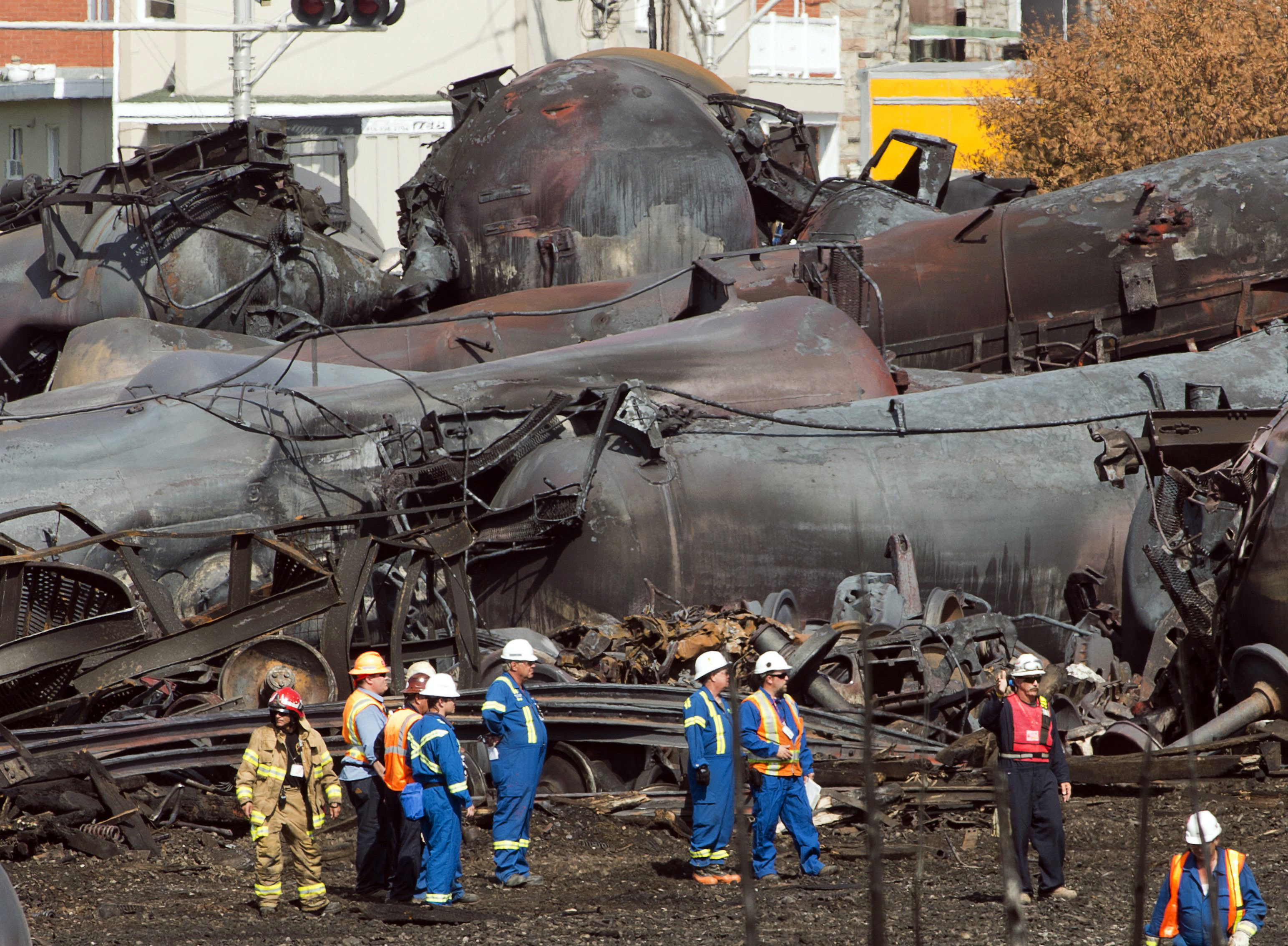 RYAN REMIORZ / Associated Press
Workers stand before the mangled tanker cars at the crash site of a train derailment and fire in Lac-Meganitc, Quebec, that happened on July 6, 2013.

“In Philadelphia, the tracks go right up against neighborhoods, homes, schools … those who would be most affected are kept in the dark,” said Tracy Carluccio, deputy director of the Delaware Riverkeeper Network, an environmental group based in Bristol.

More than 700,000 people in the region - including 400,000 in Philadelphia - live within a half-mile of rail lines that carry crude oil, according to an Inquirer analysis. Federal emergency-response guidelines recommend a half-mile evacuation zone if an oil tank car catches fire.

The hazards were brought into sharp focus by the deadly derailment of an Amtrak train on May 12 in Port Richmond.

The derailed Amtrak cars came to rest a short distance from tank cars of the type used to carry crude oil, ethanol, and other explosive liquids.

Gov. Wolf, who visited the crash scene, noted the proximity of nearby rail tankers: "That is a cause of additional concern." 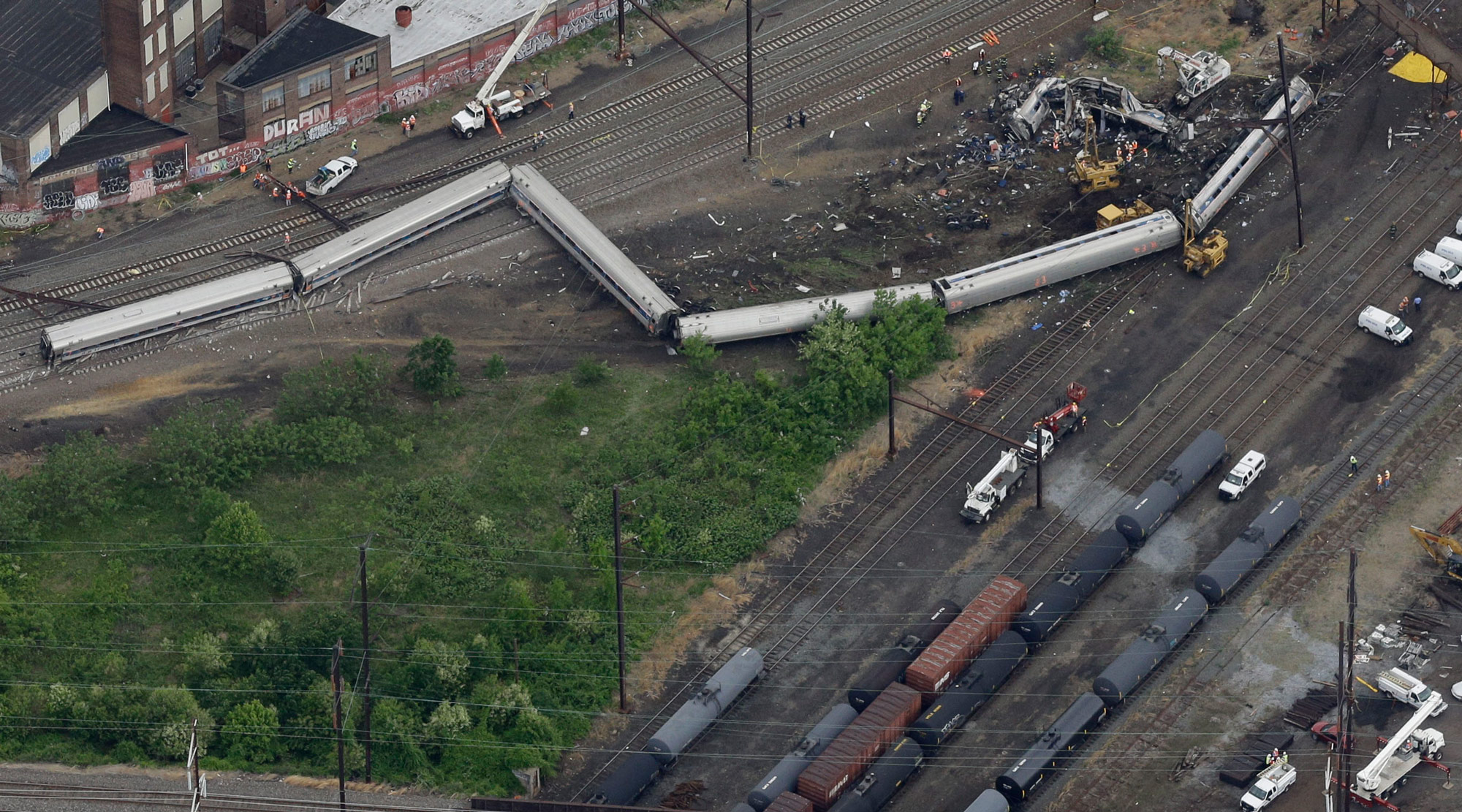 PATRICK SEMANSKY / Associated Press
Oil tankers (the black cars in the bottom left) were dangerously close to the Amtrak wreckage in Philadelphia.

Railroads cite national security and business reasons for the secrecy surrounding oil trains. They say they work closely with first responders to assure that firefighters and other emergency workers are prepared to deal with oil-train accidents.

Ed Greenberg, spokesman for the Association for American Railroads, said freight railroads "have emergency plans in place for responding to any type of incident along their entire networks. . . . These are specific plans that are unique to the location and are constantly being updated."

Railroads are not included in federal laws that imposed public accountability on other industries after major disasters: the Emergency Planning and Community Right-to-Know Act of 1986 (after thousands were killed by a chemical accident in Bhopal, India) and the Oil Pollution Act of 1990 (after the Exxon Valdez ran aground and spilled 11 million gallons of oil in Alaska coastal waters). 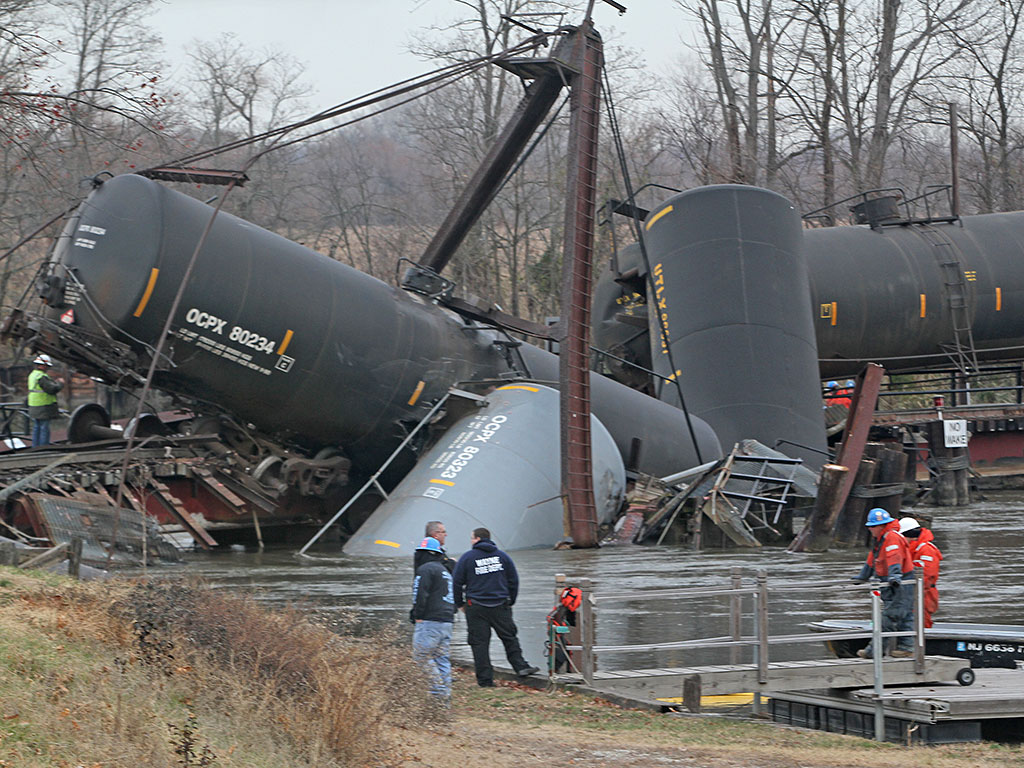 A train derailed in Paulsboro, N.J. in November 2012 and several tanker cars toppled from a railroad bridge.

Also, freight railroad bridges, unlike highway bridges or bridges owned by passenger train operators, are not subject to public scrutiny. The inspections of rail bridges are conducted by the railroads and the results are confidential.

Even the Federal Railroad Administration doesn't know how many rail bridges there are, as there is no public inventory similar to the National Registry of Highway Bridges.

Railroads also inspect and maintain their own tracks and determine what condition to keep them in, based on federal standards that regulate train speeds.

Railroads use 27 factors in deciding where to route their oil trains, but how they weigh the various factors and make the decision is secret.

New federal oil-train rules issued May 1 provide an additional buffer from public disclosure: The Department of Transportation will end its requirement for railroads to share information about large volumes of crude oil with state emergency response commissions.

Instead, railroads will share information directly with some emergency responders, but it will be exempt from the Freedom of Information Act and state public records laws.

"Under this approach," the rule states, "the transportation of crude oil by rail . . . can avoid the negative security and business implications of widespread public disclosure of routing and volume data . . .."

Increasing numbers of fiery derailments of oil trains, such as one this month near Heimdal, N.D., are focusing new attention on the lack of information available to people near oil-train corridors.

"The information about these trains is basic information that people have a right to know in order to make decisions about their lives and their families," Carluccio said.

On Jan. 20, 2014, seven cars from a 101-car CSX train derailed on the 130-year-old Schuylkill Arsenal Bridge over the Schuylkill, in University City. Six of the derailed cars were carrying crude oil, and they tilted over the river for a week. No one was hurt, and no oil leaked. But the incident alerted many residents to the proximity of dozens of oil trains rolling through the area each week. 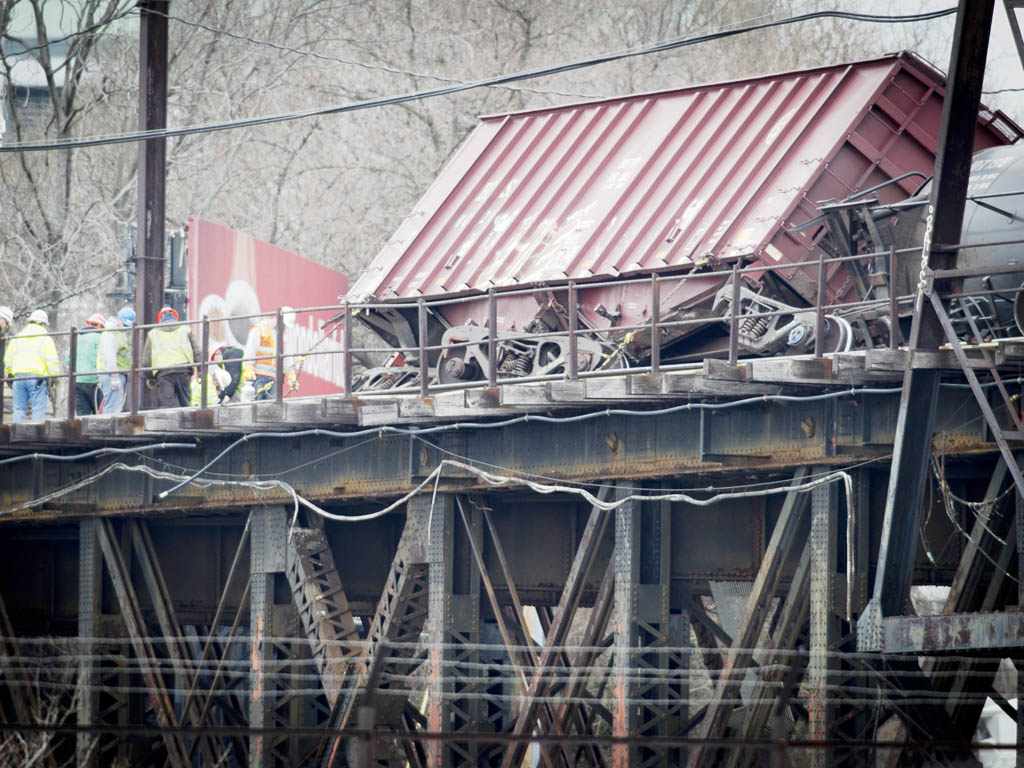 ALEJANDRO A. ALVAREZ / Staff Photographer
A boxcar sits on its side over the Schuylkill between University City and Grays Ferry as workers prepare to upright it.

The South Philadelphia refinery operated by Philadelphia Energy Solutions is the nation's largest customer for crude oil produced from North Dakota's Bakken oil field, accepting two trains a day of up to 120 tank cars each.

With the huge increase in oil-train traffic, some legislators, first-responders, safety advocates and environmentalists want more transparency from railroads about oil trains.

"Having an informed public along rail routes could supplement a carrier's safety measures and help reduce the consequences of emergencies involving hazardous materials.

"Classifying routing information about hazardous materials as 'security sensitive' would unreasonably restrict the public's access to information that is important to its safety."

"While we understand the need for detailed Security Sensitive Information to remain need-to-know, we agree with the FRA that public disclosure of broader crude-by-rail information, such as volumes and movements, is no way detrimental to transportation safety," the senators wrote to transportation secretary Anthony Foxx.

The new rule "constitutes a setback on disclosure requirements that could hamper our first responders and negatively impact the safety of our communities," the senators wrote.

Casey said, "We know from the history of our state how powerful railroads have been. . . . With that power comes a responsibility. They have to be responsive to the real concerns of communities." 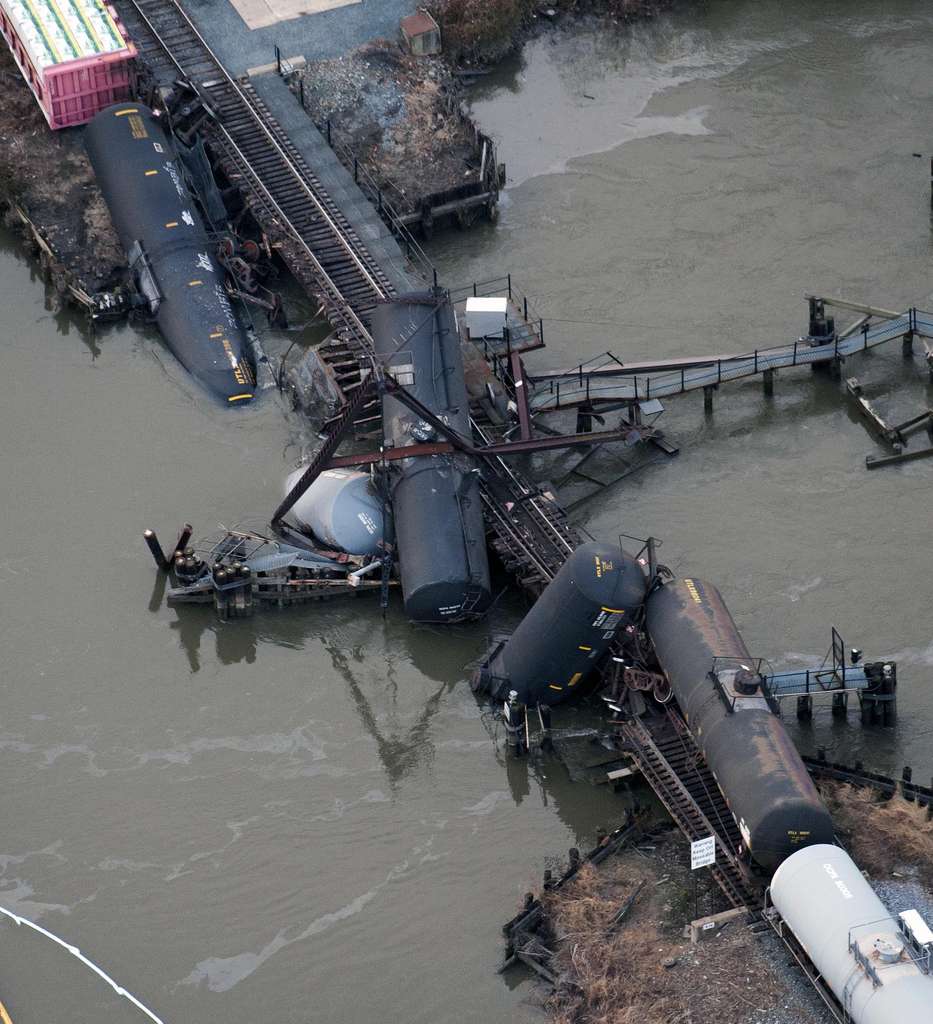 CLIFF OWEN / Associated Press
Several cars lay in the water after a freight train derailed in Paulsboro, N.J., Friday, Nov. 30, 2012. People in three southern New Jersey towns were told to stay inside after the freight train derailed and several tanker cars carrying hazardous materials toppled from a bridge into a creek.

In South Jersey, where a 2012 derailment in Paulsboro of cars containing vinyl chloride forced the evacuation of 1,500 residents, U.S. Rep. Donald Norcross (D., N.J.) made rail safety the subject of the first bill he introduced in Congress last month.

"One of the lessons from the derailment in Paulsboro is that residents and first responders need to have better access to hazmat information," Norcross said. He said his proposed law "is designed to help rail companies communicate with the community and calls on [DOT] to set new reporting guidelines that will aid transparency while keeping our rail lines secure from threats."

In Philadelphia, the city's director of emergency management, Samantha Phillips, has declined to release the city's emergency plan to deal with an oil-train disaster or other hazardous-materials accident.

"We don't share the plan for several reasons," Phillips said. "It doesn't make an average member of the public more prepared - the plan is technical in nature. You would have little way of knowing if the plan is good or not.

Crude-Oil Train Routes in the Region

Philadelphia-area refineries are among the busiest destinations for railroad shipments of highly volatile crude oil in the nation, and many of the mile-long trains pass through Center City and other population-dense neighborhoods in the region. In the event of a fire involving an oil-tank car, federal transportation officials recommend evacuating people within a half-mile of the accident. In the Philadelphia region, about 705,000 people live within a half-mile of railroad routes used to ship crude oil.

The map below shows railroad routes used for crude-oil shipments, their half-mile evacuation zones, and facilities to which the oil is shipped. Click on the icons on the map for more information.

Philadelphia-area refineries are among the busiest destinations for railroad shipments of highly volatile crude oil in the nation, and many of the mile-long trains pass through Center City and other population-dense neighborhoods in the region. In the event of a fire involving an oil-tank car, federal transportation officials recommend evacuating people within a half-mile of the accident. In the Philadelphia region, about 705,000 people live within a half-mile of railroad routes used to ship crude oil.

The map below shows railroad routes used for crude-oil shipments, their half-mile evacuation zones, and facilities to which the oil is shipped. Tap on the icons on the map for more information.

Greenberg, of the American Railroads association, said the information "which reflects priority areas of security, safety and business should remain with federal, state and local responders. They're the experts."

Carluccio, of the Delaware Riverkeeper Network, said it was "ironic" that information about trains carrying oil was shielded from public disclosure while routes and schedules of trains carrying people "are made readily available."

CSX, which moves 15 to 30 oil trains weekly through Philadelphia, Bucks, Delaware and Montgomery Counties, "shares information about our operations that is sensitive to the security environment that exists in the world today," spokesman Rob Doolittle said. "We do have response plans and we do share those plans with first responders."

First responders can get information about what's in a specific rail car on their cellphones, using a special mobile app, based on a rail car's unique identification number, Doolittle said.

Richard Harris, spokesman for Norfolk Southern, which moves about 20 oil trains weekly through Philadelphia, said, "We have been consistent in not releasing specific crude oil train routing and volume information to the public for reasons of safety and security."

Harris said the railroad works "very closely" with first responders, including training them "in how to effectively deal with and mitigate an incident should it occur."