1896: How a Philadelphia murder led to discovery of H.H. Holmes' Chicago 'House of Horrors'

This series, Crooks, tells the forgotten stories behind some of the most outlandish crimes, and criminals, in Philadelphia history. See below for how to access these archives for yourself.

As the sun rose on May 7, 1896, gawkers crowded outside the high stone walls of Moyamensing Prison in anticipation of the execution of one of America's first serial killers.

Reed and 10th Streets pulsed as policemen pushed the horde away from the gates and the horde pushed back. Observers could neither see nor hear the proceedings, but they were nevertheless drawn to the fortress by a morbid fascination with an authentic monster.

Herman Webster Mudgett is better known as H.H. Holmes, the man who built a "House of Horrors" in Chicago where he tortured and murdered unsuspecting victims between 1886 and 1894.  But it was not until he murdered a business partner in Philadelphia that police would discover the extent of his crimes.

In written testimony, Holmes confessed to 27 murders.  But considering his penchant for inconsistent confessions and talent for misdirection, some biographers count more than 200 victims.

As the onlookers clamored outside, Holmes awoke around 6 a.m. in the prison's dank recesses and appeared at his wooden cell door well-rested and smiling.

The 34-year-old offered the guard a pleasant: "Good morning."

"How do you feel?" the guard asked. "Are you nervous?"

"Look at that," Holmes said as he slipped his hand between the bars, holding it steady without a tremor.

Smiling, the murderer drew his hand back and pulled on his trousers.

"Not much nervousness about that," Holmes said, "was there?"

Blocks from the site where  the 1893 Chicago World's Fair was being erected, Holmes took over the pharmacy where he worked, and bought a vacant lot down the street.

On the lot, he built a three-story maze-like mansion that newspapers would later nickname "The Murder Castle."

The "castle" was designed as a death den, with trap doors and sliding walls, airless vaults and dissecting tables. There was a crematorium and a gas chamber on the premises, as well as a lynching parlor and a stretching rack. 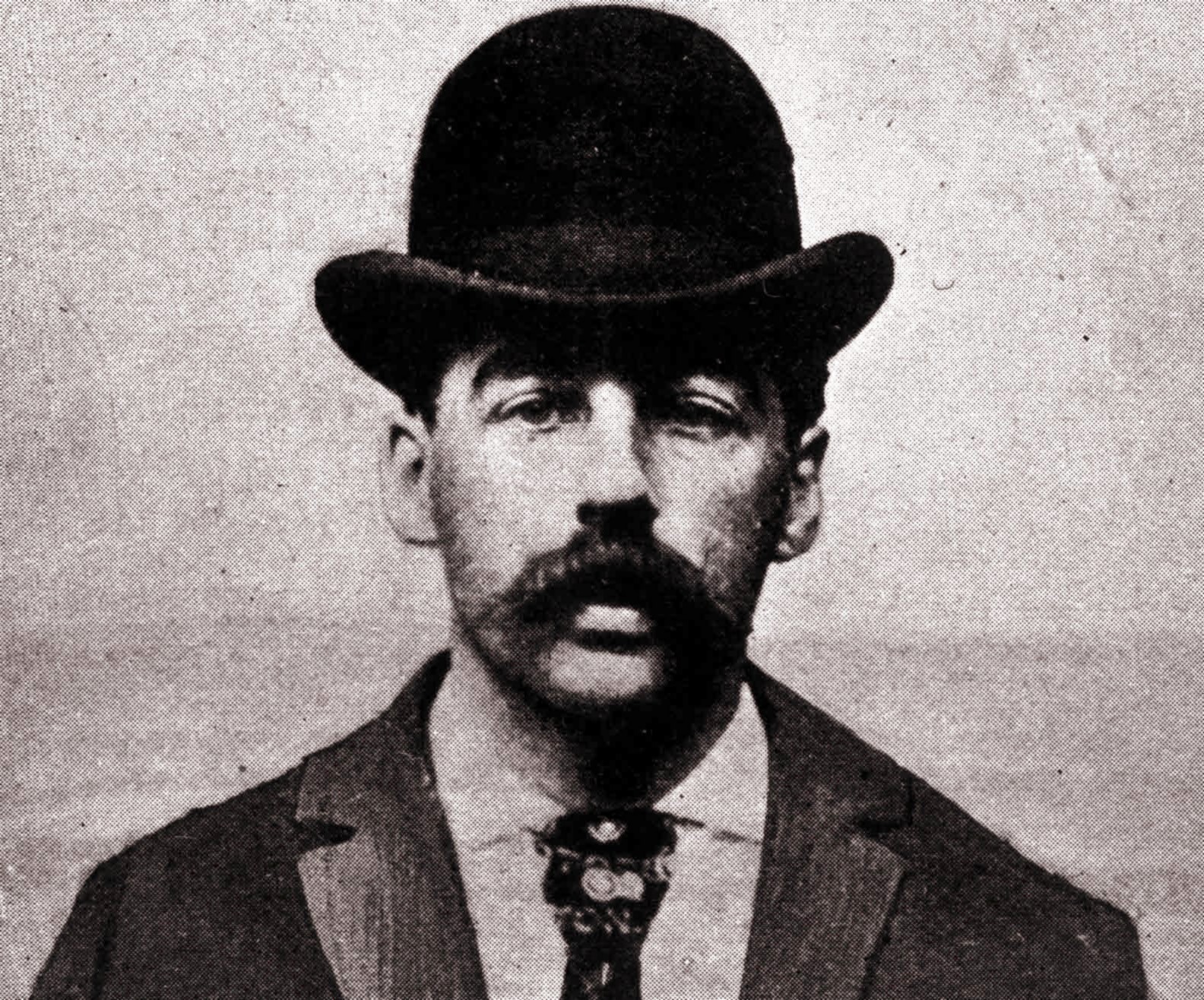 A greased chute led down to a lime pit where chemicals sped up the decomposition of bodies.

Holmes targeted young women who were either in town for the fair and needed a room, or who worked for him. He would lure them with promises of fortune or marriage, and then intimidate them into signing a life insurance policy before he whirled them through his contraptions.

Occasionally, he skinned the bodies and sold the bones.

By 1894, Holmes had left Chicago -- fleeing not from police, but from creditors seeking payment for that expensive mansion.  He returned to Philadelphia, where a few years earlier he had worked at Norristown State Hospital and a drug store on what is now Cecil B. Moore Avenue.

For his second act, he set up a bogus patent office on Callowhill Street near 13th with a would-be accomplice, Benjamin Pitezel. Their scheme was straightforward: fake Pitezel's death and split the $10,000 insurance money.

Instead, Holmes waited until Pitezel was drunk, lit him on fire and burned him alive at their Callowhill office. Afterward, Holmes staged the scene to make the death look accidental, and claimed the insurance money.

Holmes then took three of Pitezel's five children on a road trip.

The insurance agency investigated the Pitezel claim, and its findings pointed to fraud. The agency caught up with Holmes, who was alone, in Boston in late 1894. He confessed to wrongdoing, and agreed to be extradited to Philadelphia for a trial.

After Philadelphia police started its own investigation into the matter, it became clear that Holmes didn't fake Pitezel's death, but that he murdered him. One of the department's top detectives, Frank Geyer, was assigned to the case.

In Toronto, inside a house that Holmes had previously rented, Geyer discovered the decomposed bodies of Pitezel's daughters, 15 and 11, buried in the cellar.

Police in Chicago, galvanized by Geyer's breakthrough, searched the "castle" and found the lime pit, torture devices, and bodily remains.

And then Geyer found Pitezel's son.

The 8-year-old boy's remains, mostly charred, were located inside a chimney flue in an Indiana rental home.

In the fall of 1895, Holmes went on trial for Pitezel's murder in Philadelphia. On the first day, he dismissed his two attorneys and attempted to defend himself, but brought back the attorneys the next night. After one week, the jury found him guilty and he was sentenced to hang.

Holmes requested that he be buried in cement to prevent potential grave robbers at his unmarked grave in Holy Cross Cemetery in Yeadon.

Shortly after the trial, The Inquirer published a written confession attributed to Holmes -- a confession the paper purchased -- on the front page of its April 12, 1897, Sunday edition.

"I have every attribute of a degenerate -- a moral idiot," Holmes wrote, adding that he was physiologically morphing into a monster,  with one side of his face "marked by a deep line of crime and being that of a devil."

Standing on a scaffold in the bowels of the prison, Holmes spoke his last words.

He stood with a calm demeanor and quiet bearing. He wore grey trousers, black vest and cutaway coat, an ensemble he had worn many times before, save for a slight addition of a white handkerchief lightly knotted around his neck.

At 10:10 a.m., flanked by two priests, his lawyer and the prison superintendent, Holmes slowly addressed the more than 120 men in attendance, and made a last-minute denial. 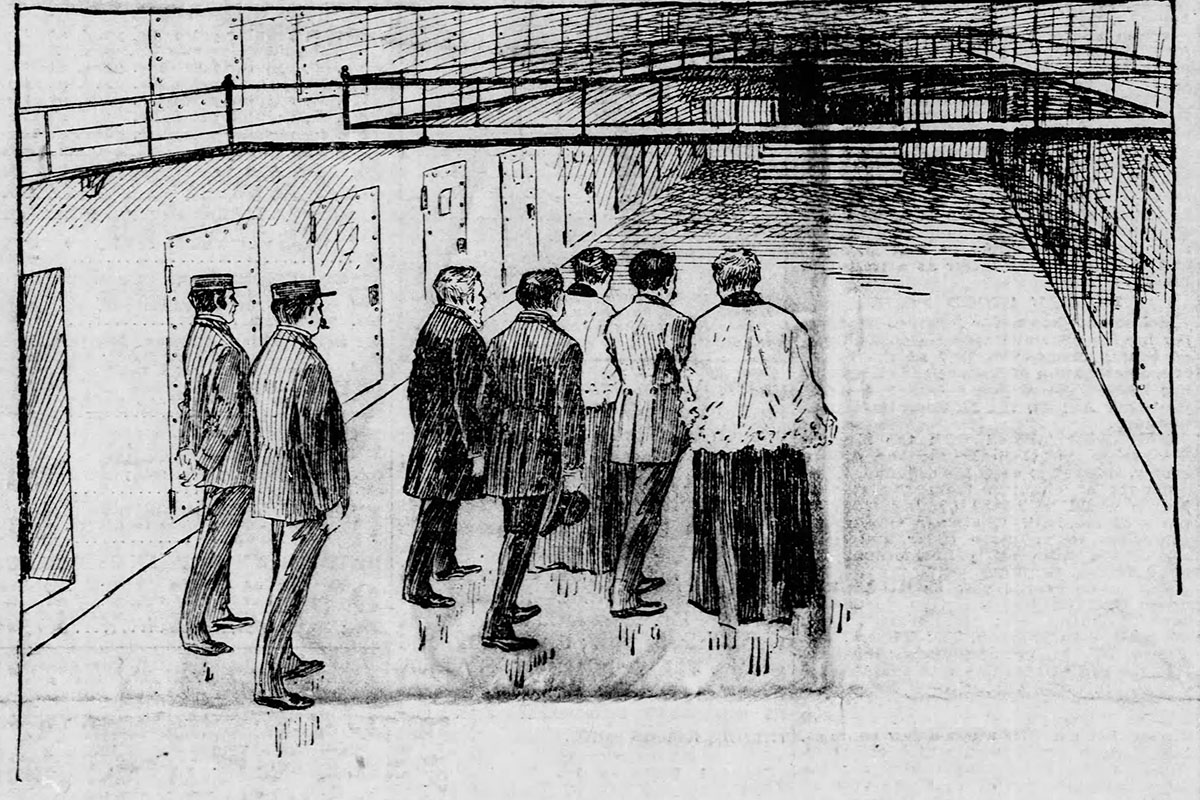 An Inquirer illustration depicts H.H. Holmes being led to the gallows in Moyamensing Prison on May 7, 1896. (INQUIRER ARCHIVES)

"Gentlemen, I have very few words to say. In fact, I would make no remarks at this time were it not that by not speaking I should acquiesce in my execution. I only wish to say that the extent of my wrongdoing in the taking of human life consists in contriving the killing of two women that have died at my hands as a result of criminal operations. I wish to also state, so that there can be no chance of misunderstanding my words hereafter, that I am not guilty of taking the life of any of the Pitezel family, of the three children or of the father, Benjamin F. Pitezel, of whose death I was convicted, and for whose death I am now to be hanged. That is all I have to say."

He finished at 10:12 a.m., and shook hands with the four men at his side. The lawyer and the priests stepped off the scaffold. The priests dropped to their knees in prayer.

The superintendent fitted Holmes with the noose, his hand trembling.

He fitted Holmes with a black cap, and asked if he was ready.

About this Series:
Using the digital archives of The Philadelphia Inquirer and Daily News, Crooks tells the forgotten stories behind some of the most outlandish crimes, and criminals, in Philadelphia history. *Search the archives for yourself and subscribe for full access.*