It's easy to hate the AT&T Building, that glowering medieval fortress that stands guard alongside the South Street Bridge. The building is an architectural Darth Vader that celebrates its mighty impenetrability; not a single entrance is visible from the street, and the windows don't start until the second floor. What adds to its dark mystery, according to neighborhood lore, is that no human being has ever been spotted entering or leaving its compound.

Why would anyone put such a forbidding design at this bend in the Schuylkill? Rearing up more than a hundred feet on 27th Street, the massive structure slams hard up against the neighborhood's diminutive working-class rowhouses.

It's not my habit to defend such anti-urban buildings, but the mystery of Fortress AT&T prompted me to delve into its origins. The more I learned, the more respect -- or, rather, understanding -- I had for the design by Philadelphia's Ewing Cole.

The redbrick citadel, it turns out, is a giant switching station that today handles the voice and data transmissions for the entire Northeast corridor. The building was commissioned in 1967 by Bell Telephone to replace its old exchange at 17th and the Parkway, housed in an early 20th-century, neoclassical "skyscraper" by John T. Windrim. At the time, the nation's expanding telecommunications' infrastructure was following the railroad lines. Bell Telephone did the same, settling on a site next to the major East Coast freight line now operated by CSX. 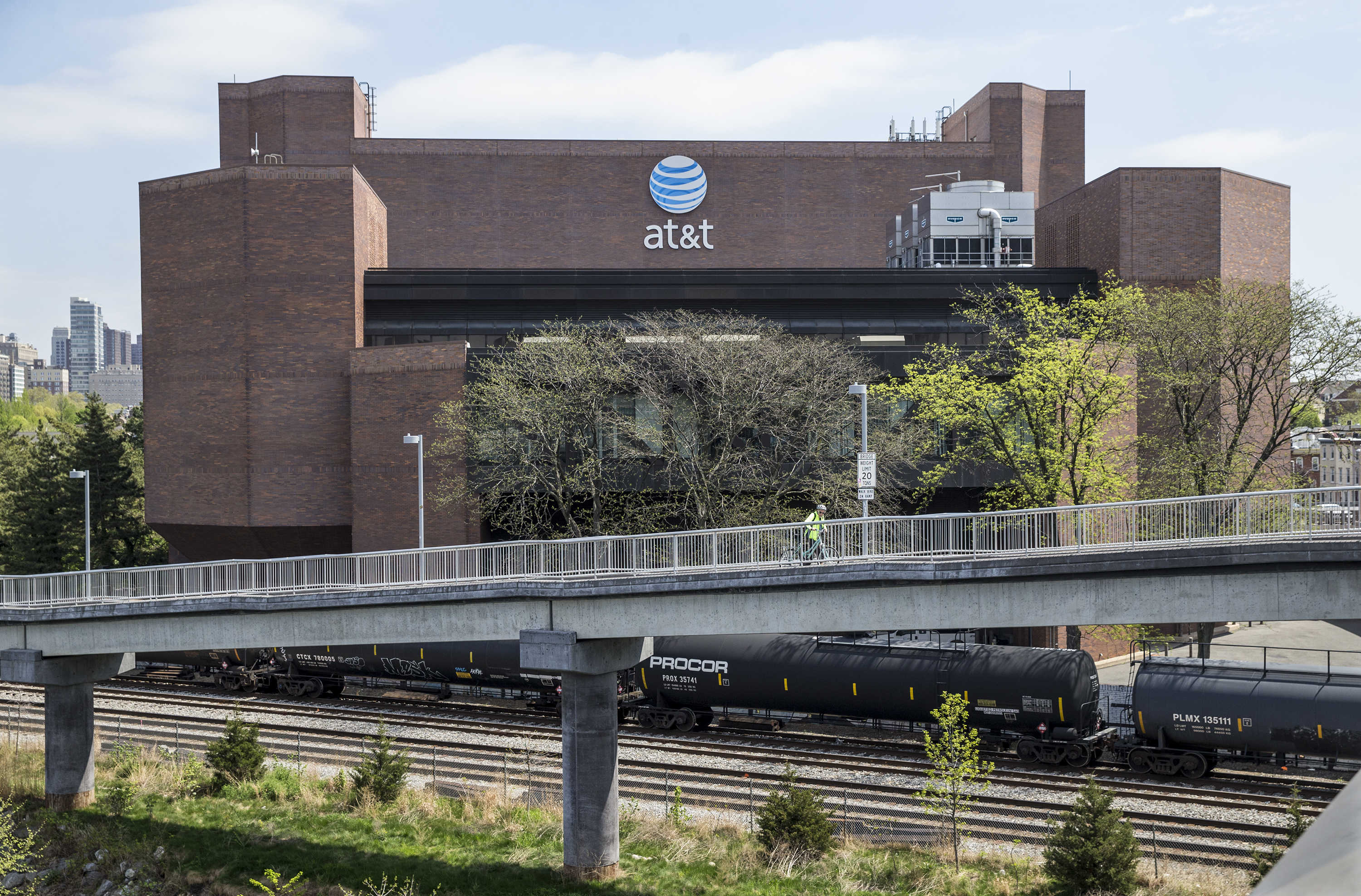 Back then, the Schuylkill riverfront was nothing like the playground it is today. Barges were still unloading coal at the foot of Spruce Street well into the '60s, and the remains of a brick kiln occupied what is now the Markward rec center. Apart from Frank Furness' great B&O railroad station at 24th and Chestnut (sadly demolished in 1963), the waterfront was lined with thick-boned warehouses. In that context, a telephone exchange might have been seen as a step up for the neighborhood, even if it did look like a bunker.

Ewing Cole seems to have taken its architectural cues from the site's symbolic position at the entrance to Center City. The exchange building is conceived as a giant guardhouse, with its front portal facing the river. Viewing it from the bridge, you can see that the exchange comprises a series of enormous towers that step up from the river to 27th Street. The towers embrace a central command room that, appropriately enough, resembles a truss bridge.

You often hear the AT&T Building described as "windowless," but there are actually six levels of ribbon windows on three sides of the structure, as well as several additional rows of windows facing the river. Perhaps the openings are overlooked because the broad expanse of blank walls are what dominates the building.

The brutal, closed-off design reflects both the architectural fashions of the time and the needs of the telephone company. In the separation of the towers from the central core, you can see the influence of Louis Kahn, who famously championed setting off "servant" spaces containing building infrastructure from the "served" spaces housing the building's occupants. In this case, the occupants are computer units. Because there are so few people in the building who require windows, the blank walls are a case of form following function. The reason there are no windows on the lower floors is to protect the exchange equipment from flooding.

Such a hermetic design is obviously not what we like to see today on the Schuylkill Banks, which has evolved into one of Philadelphia's most beloved parks. Knowing the logic that turned the AT&T Building into a fortified computer stronghold might not make us like the building, but at least we can appreciate why it is what it is.

"There  is more to this story. By the time this building was started in 1972, coal barges had long been gone and the dairy on the site had been closed for years. The land was designated for high rise apartments on Ed Bacon's 1963 Center City Plan. This was to provide a high-population base to feed people into Schuylkill Park,  which was part of the same plan. Much of the land along the river had been acquired by the city for the park, aided by federal funds. Mayor Jim Tate, however, knuckled under to Bell of Pennsylvania, which had originally constructed the thing. I co-chaired the Citizens Coalition to Develop Schuylkill Park, formed in 1971 to oppose the building, understanding it would interfere with the development of the riverbank as a recreational facility. Bell Tel falsely told the Irish-American community south of South Street that the building would provide lots of jobs to the neighborhood, as a strategy to pit the old Taney neighborhood against Center City residents who envisioned the development that became the Scuylkill Park years later. The Windows on the south, east and north sides are windowed boxes attached to the design in response to neighbors' and the Planning Commission's objections. Ewing Cole's original design would have had blank walls all around except on the west creating a completely dead box. These cosmetic paste-owns failed, because one has ever to be seen inside them. The walls were reportedly 5 feet thick to withstand a nuclear blast, and the footings would allow a much taller building to be built on top of this one. We lost the fight to stop the building, but in the long run we won because we put Scuylkill Park firmly on the map so we were able to break ground for it -- north of this building -- in 1978.