In sync with Philly

Architecture critic Inga Saffron reviews Comcast’s new tower. While it is the city’s tallest skyscraper, where it soars is on the ground. The public is invited to step inside for food, art, and entertainment.

As Philadelphia’s tallest skyscraper, the new Comcast Technology Center at 18th and Arch will inevitably be judged by how it looks among the clouds. People will debate whether its telescoping, art deco-inspired mast resembles a vulgar hand gesture or looks more like a cigarette being extracted from its box. That’s what happens when you aim for the heavens; your skyscraper becomes a Rorschach for the public imagination.

What I see when I look at the new, Norman Foster-designed tower is a dynamic, elegant building that has visibly dragged the Center City skyline westward. On a foggy night, shrouded in clouds, its signature switchblade mast looks like something out of Batman’s Gotham, mysterious and brooding. (The daytime views are another matter.) The 1,121-foot building has a slim, almost Gothic, profile that pleasingly echoes, but, sadly, does not surpass Foster’s most important skyscraper design, the HSBC headquarters in Hong Kong.

I also see a giant zipper cinching a stylized corset.

When we talk about skyscrapers, it’s almost impossible not to become obsessed with a building’s exterior imagery. The thing is, the skyline view is probably the least newsworthy thing about Comcast’s tower, its second downtown building since 2008.

Sure, the 60-story glass-and-steel tower has cracked the Top 10 list of America’s tallest skyscrapers (for now, anyway) and will form the peak of Center City’s architectural cardiogram for a long time. But Comcast had to resort to some serious sleight-of-hand to reach that pinnacle. Without its 210-foot mast, Comcast’s Technology Center would be only a single story taller than its first skyscraper, the 975-foot Comcast Center by Robert A.M. Stern.

What the new Comcast tower offers Philadelphia is something far more meaningful and lasting than a mere height record. The new tower is the rare, globally produced, corporate behemoth that speaks directly to its hometown, intimately, with affection. You can almost hear the c’mon and the jawn echo from the lobby’s end-grain wood tiles, reclaimed from old factories. Where Comcast soars is on the ground and in the numerous public spaces that weave through the building, syncing the tower to the rhythms of Philadelphia.

The Comcast Technology Center has been a long time coming. Originally expected in 2017, the $1.5 billion skyscraper is a year behind schedule and potentially $67 million over budget. Strips of protective blue tape still shield the facade’s metal trim, and the contractor has yet to remove the construction barriers from Arch Street. A Four Seasons hotel, which will occupy the glass wafer that rests on top of the corset, won’t be ready for guests until sometime this spring. Theyinclude Comcast CEO Brian Roberts, who has taken an entire floor for a private apartment.

Despite the tower’s prolonged gestation, Comcast’s 4,000 engineers and software designers were able to move into their open-plan work spaces last month. The building, which is jointly owned by Comcast (80 percent) and the developer Liberty Property Trust, is effectively open for business — and ready for review.

To access the office floors, employees and visitors enter on 18th Street through a lattice-like canopy that leads into a soaring bird’s nest of a lobby. Fitted out with floor-to-ceiling wooden scrim and planted with a forest of twisting ficus trees, that capacious glass room is a knock-your-socks-off way of saying hello. On the ceiling, a Jenny Holzer digital ticker energizes the space with a constant stream of words about Philadelphia, while a mirrored, multifaceted kite sculpture by Conrad Shawcross grounds the massive room and provides a central visual focus.

Best of all, the 70-foot-high lobby is entirely public.

Although the furniture has yet to arrive, you’re free to wander around. Take the escalator to the mezzanine and order a gourmet pretzel at the Vernick Coffee bar or a sit-down meal at the restaurant. It will set you back a few bucks, but it’s worth it to bask in the luxury of light and space. If you hang around long enough, you might even be able to figure out what Comcast has planned for the enormous white sphere that remains under wraps in the mezzanine’s south corner.

Even more than the winter garden at the first Comcast tower, this lobby feels like a public living room. Comcast plans to set up a farmers market on the ramp leading to the SEPTA concourse. Once the Four Seasons opens, the high-speed glass elevators on 19th Street are likely to become the greatest carnival ride in town. In less than a minute, they’ll speed visitors to the hotel’s 40-foot-high lounge and restaurant, another spectacular glass room where the public is welcome.

But if you want to understand what makes this such a deeply Philadelphia design, you’ll have to walk outside to Arch Street.

Because the site is long and narrow, Foster conceived of the project as two separate pieces, one horizontal, the other vertical. The horizontal piece — a shoe-box-shaped podium — runs the length of the block between 18th and 19th Streets. Comcast’s slim new tower rises from the middle of this long podium, hoisted up on massive columns.

The aesthetic treatment is so different, you might think the two pieces had different architects. The tower is light and airy, faced mainly in glass that has been crisply detailed with thin metal bands and the distinctive, zigzagging corset. Its facade sparkles in the sunshine.

The podium, on the other hand, is virtually opaque. The 70-foot-high shoe box has been so tightly wrapped in strips of corrugated metal that there are only narrow slits for windows above the ground floor.

What gives? As it turns out, those corrugated bands were inspired by the steel train cars manufactured at the old Budd plant in North Philadelphia. Like racing stripes on a sports car, they infuse the podium with a sense of motion. The corrugated bands transform the podium into a speeding locomotive, shooting through the legs of Foster’s super-modern tower. Taken as metaphor, the design suggests that the tower housing Comcast’s media and tech empire rests on the legacy of Philadelphia’s industrial past.

This isn’t a mere design conceit. Foster grew up in Manchester, England, a city that, like Philadelphia, suffered the ravages of deindustrialization and is only now finding its way back through new industries like tech. The tower’s architects — Foster + Partners, Gensler, Daroff Design, and Kendall Heaton Associates — carry the theme of a resurgent industrial city through the entire building.

You can see it reflected in the main work spaces, which have been left a bit rough to evoke Philadelphia’s many repurposed factory lofts. Gensler, which designed the interiors, fills the office and social spaces with wood elements — rough-hewn planks, smooth midcentury furniture, old-timey bookcases — to offset Foster’s slick, machine-age sensibility. Rather than painting over markings made by contractor LF Driscoll during construction, those crude calculations have been left exposed to emphasize that even a building this size and complex is the work of human beings.

That aesthetic is a long way from the marble-slathered corporate office towers that defined American cities in the 1990s. Comcast is, of course, a major corporate power, that exerts enormous influence over our daily lives, but Foster uses his immense skills to present the company in a softer light.

The irony, of course, is that Foster has become the go-to architect for the world’s biggest media-tech conglomerates. Just in the last year, he rolled out new headquarters for Apple in California and Bloomberg in London’s financial district. Both buildings are even more deluxe and bespoke than Comcast.

Of those three projects, Comcast’s is the most committed to forging connections with the larger world. While the Bloomberg headquarters includes restaurants on the ground floor, its lobby and interior spaces are as fortified as Fort Knox. Apple is many times worse. It sits in splendid isolation behind a security perimeter on a 175-acre suburban campus. Both are temples where the engineer-gods cook up new ways to keep us connected to our devices.

In contrast, Comcast weaves its building directly into the fabric of the city — through a pristine, art-filled SEPTA concourse, through a new, midblock crosswalk on 18th Street, through its restaurant, theaters, and ballroom. By making its new tower accessible to the public, Comcast offers a different, and far preferable, model for the architecture of tech.

None of those innovations is apparent when you gaze at the new tower from afar. 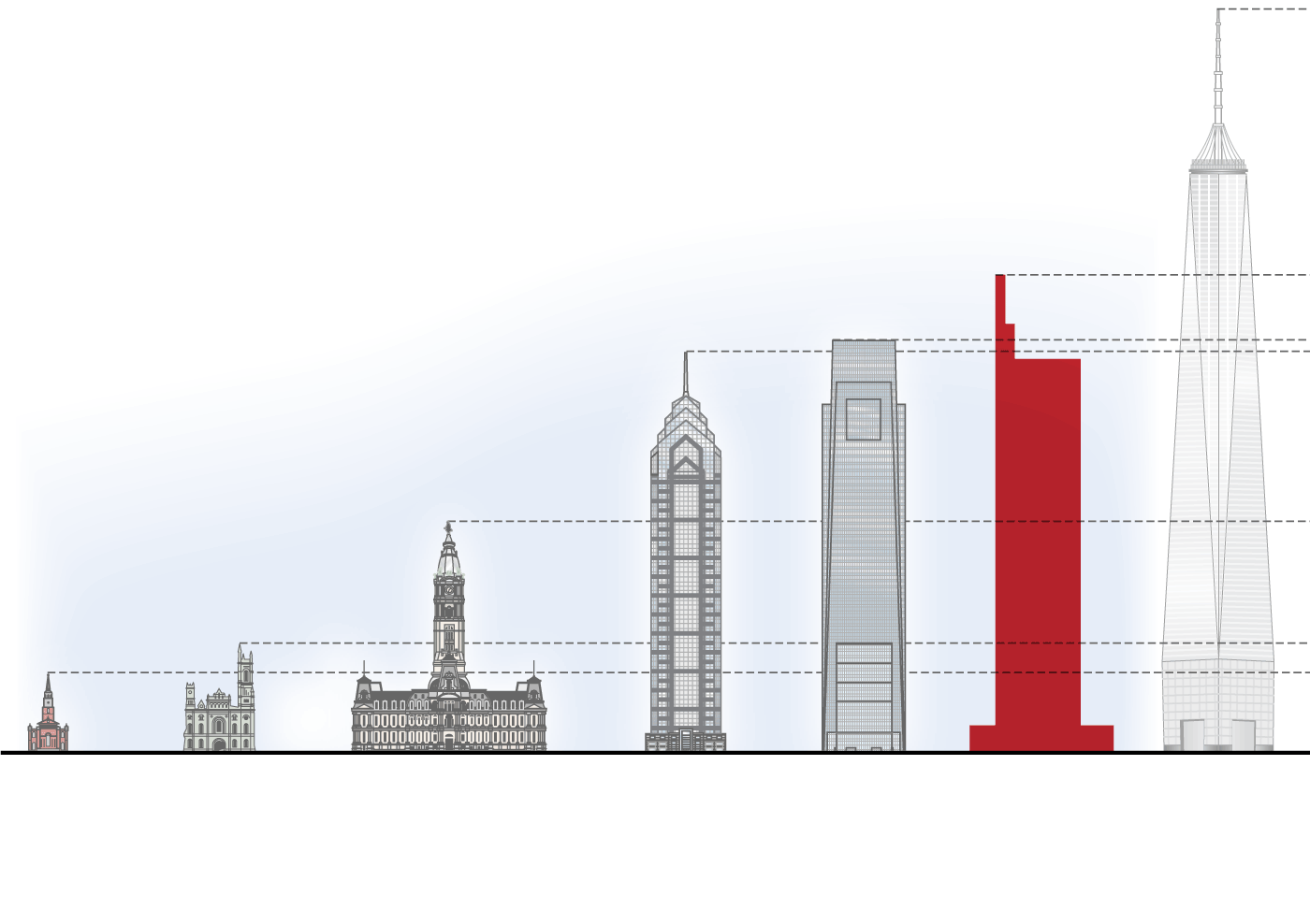 The history of Philadelphia’s tall buildings starts with the spire at Christ Church, which was the tallest structure in North America

for 56 years. City Hall remains the tallest masonry building in the world, and set the unofficial height limit for the city for much

of the 20th century. One Liberty Place smashed that

“gentleman’s agreement” and ushered in

a new era of tall buildings, now topped by

Comcast Technology Center. It is the first

and is currently the 10th-tallest

The history of Philadelphia’s tall buildings starts with the spire at Christ Church, which was the tallest structure in North America

for 56 years. City Hall remains the tallest masonry building in the world, and set the unofficial height limit for the city for much

of the 20th century. One Liberty Place smashed that “gentleman’s agreement” and ushered in a new era of tall buildings, now topped by Comcast Technology Center.

It is the first Philadelphia building to top 1,000 feet, and is currently the ninth-tallest

Comcast’s strength is not its form, which is essentially a two-tier slab. It is not a sculptural tower, like Foster’s offices for Hearst in New York, although it does share a similar visual element: the diagonal trusses that zigzag up the sides of the tower.

Those are a kind of exoskeleton, supporting the structure so it can stand upright. The trusses were necessary because of the tower’s asymmetrical organization, which placed the elevator core off to the side, rather than in the center. John Gattuso, the Liberty Property executive who oversaw the tower’s creation, describes the diagonal braces as “bones” and says they are meant to contrast with the slick “skin" of Comcast’s first tower.

That first Comcast tower was often criticized (unfairly) for lacking a spire. While the new tower satisfies the popular demand for a crowning ornament, the mast’s design falls flat in the cruel light of day. As it telescopes up, the metal panels change color, from light gray to dark gray and back again. The mismatch was apparently caused by the louvers embedded in the mast to allow steam to exhaust from the building. Their openings make the gray metal appear darker than it is. For such a refined work of architecture, the effect is surprisingly cheesy.

It’s a significant flaw, but not a fatal one. As a work of Philadelphia architecture, this tower offers the most fully realized aesthetic vision for a skyscraper since the PSFS tower was completed in 1932. That’s not to say it rises to the same level of historical significance. It probably can’t even match the importance of Liberty Place, which gave Philadelphia a new way of thinking about itself as a city. But by integrating the new tower in the life and history of Philadelphia, Foster and Comcast have shown that it is possible to reconcile the needs of a big tech company with our democratic values.