A casino in Amish country? A potential onslaught of slots divides a rural Pa. community.

Many residents in this politically conservative area, where Amish families drive horse-drawn carriages down Route 23, regard the casino project as a deal with the devil. But the town supervisors say it will bring much-needed tax revenue.

Penn National Gaming, which operates the Hollywood Casino near Hershey, saw an opening to place a new gaming hall at a Pennsylvania Turnpike exit just outside Chester County to attract gamblers from Philadelphia’s growing western suburbs. Caernarvon Township, which includes Morgantown, saw an opportunity to capture host-community tax benefits for its 4,000 residents that otherwise might go to a neighboring municipality.

But many residents in this politically conservative area, where it’s not unusual to see Amish families driving horse-drawn carriages down Route 23 to shop at the Morgantown Walmart, regard the casino project as a deal with the devil. They see the proposed casino as a threat, an insult to a deeply religious community that could lead to an increase in drinking, personal bankruptcy, broken families, and general moral decay.

“In every way, it’s incongruent with this community,” said Sam Rohrer, a former state representative, who is president of the American Pastors Network, based in the Chester County borough of Elverson, bordering Caernarvon.

Several hundred people turned out for a standing-room-only hearing in Caernarvon on March 4, conducted by the Pennsylvania Gaming Control Board, which has final say on Penn National’s application. While some labor and business leaders spoke in favor of the project, most speakers were opposed, and they were the only ones who got rousing ovations.

“This is not a community, like Las Vegas, where ‘what happens here, stays here,' " said the Rev. Coleen Brandt Painter, pastor of the Elverson United Methodist Church, which helped organize a petition that got more than 1,000 signatures opposing the casino. “This is a community where everybody knows your name, and your business, and we like it that way.”

Some opponents painted lurid portraits of crime, sex trafficking, and predators that would be drawn to the casino, and they feared that unspeakable acts might spill over into a public swimming pool next to the proposed casino site.

“The kind of stuff they were bringing up is crazy,” said Allen Styer III, the chairman of the Caernarvon Township Board of Supervisors, which welcomes the casino project as a major boost to the town’s tax base. “I don’t foresee any additional human trafficking or murder-for-hire in our town.”

Styer said Caernarvon acted defensively out of fear that neighboring New Morgan Borough, a former iron ore mine that was notoriously formed into a municipality three decades ago to host a landfill, would gladly accommodate a mini-casino. If New Morgan got a casino, Caernarvon would get stuck with all the problems without receiving any host benefits, he said.

“It was really a no-brainer if you’re looking out for what’s the best interests of the community, based on facts," said Styer. Penn National estimates Caernarvon would get $1.6 million annually in new tax revenue, or about 62 percent of the town’s current $2.6 million budget.

Some opponents have resigned themselves that the Morgantown project is a done deal. Penn National, a homegrown Wyomissing, Pa., company that began with a single Dauphin County racetrack and is now a publicly traded firm with 30,000 employees and 41 properties nationwide, has already paid a $7.5 million license fee to the state to locate a satellite casino in the area. 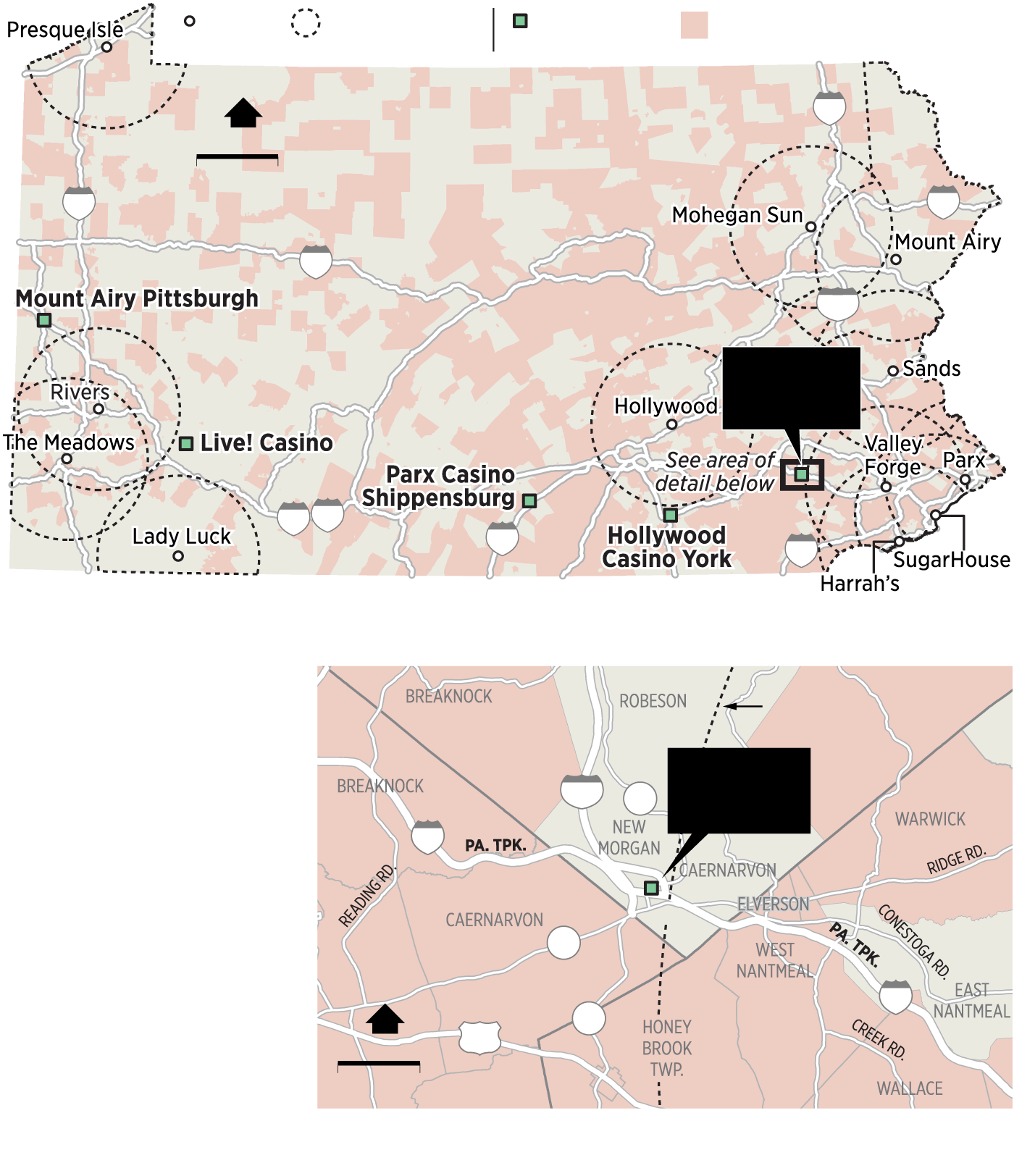 The new “mini-casinos” — each can contain up to 750 slot machines — could not be built within 25 miles* of a competitor’s existing casino. More than 1,000 of the state’s 2,500 municipalities opted out of hosting mini-casinos.

What remained were a limited number of high-traffic locations in permissible municipalities and outside of exclusion zones. The state last year awarded five licenses for mini-casinos.

The 2017 expansion of Pennsylvania’s gaming law allowed existing casinos to construct satellite casinos. The new “mini-casinos” — each can contain up to 750 slot machines — could not be built within 25 miles* of a competitor’s existing casino. More than 1,000 of the state’s 2,500 municipalities opted out of hosting mini-casinos. What remained were a limited number of high-traffic locations in permissible municipalities and outside of exclusion zones. The state last year awarded five licenses for mini-casinos.

Mini-casinos are only one aspect of Pennsylvania’s expanded gaming law in 2017 that will bring gambling much closer to communities like Morgantown. The law also legalized sports betting, video-game terminals in truck stops, online gaming, and internet lotteries. The state’s iLottery launched last year, and interactive casino gambling will start this year.

The new law authorized the state’s 13 licensed casinos to apply for up to 10 satellite casino licenses, as long as the new facilities were no closer than 25 miles from an existing casino. More than 1,000 of Pennsylvania’s 2,500 municipalities opted out of hosting a satellite casino by a deadline at the end of 2017.

The term mini-casino is really a misnomer, because nothing about them is miniature. The proposed 86,000-square-foot Hollywood Casino Morgantown would be about half the size of the flagship Hollywood Casino at Penn National Race Course in Grantville. The Morgantown casino would cost $110 million and contain 750 slot machines and 30 table games, the maximum allowed under the law. It would also include a sports betting area, restaurants, and bars.

The Gaming Control Board is likely to vote on the licenses starting in May. The Morgantown site, which abuts the turnpike less than a mile from the Lancaster County border, has generated far more public opposition than the four other proposed satellite casinos. Penn National aims to begin operations in Morgantown in late 2020.

Of the four other proposed casinos, two would be located in shuttered anchor locations in shopping malls — one in the York Galleria Mall, also operated by Penn National, and another in the Westmoreland Mall outside Pittsburgh, operated by Stadium Casino LLC, whose flagship casino in South Philadelphia has not even been built yet.

Penn National, which would operate two satellite casino locations, was no fan of the mini-casino concept. It settled a lawsuit last year that objected to the new gaming law, alleging that satellite casinos would cannibalize the revenue of existing properties. And it says its casino in central Pennsylvania was more vulnerable to competition because all its flanks were exposed (unlike the Mount Airy Casino in the Poconos, for which an enlarged buffer zone was written into the law).

Penn National bid a stunning $50.1 million for the rights to place the first satellite casino in York, which effectively blocked any competitors from encroaching along I-83 to the Maryland border.

The Morgantown location emerged last year after Penn National won the final satellite casino auction and targeted territory near its headquarters in Wyomissing. The selection of Caernarvon Township became clear because Morgantown is surrounded on three sides by towns that opted out of hosting a mini-casino. It’s the only place along the turnpike in Lancaster and Berks County that did not opt-out.

The Morgantown site, a 36-acre property that owner Pettinaro Group has unsuccessfully marketed as a retail location, is also about 400 yards outside the 25-mile exclusion zone for the Valley Forge Casino Resort in King of Prussia, so it is as close as is legally possible to the existing casinos in Philadelphia area.

“We’re excited to be building a new $110 million economic engine that will allow us to penetrate deeper into the Western Philadelphia suburbs,” Eric Schippers, Penn National’s senior vice president of public affairs and government relations, said in an email. He said the new locations in Morgantown and York would generate new revenue for the company, while protecting its existing market share in central Pennsylvania.

Caernarvon approved a zoning change in 2017 allowing casinos in a commercial zone, and Penn National announced the Morgantown location in October 2018. But opposition did not gain momentum until this year ahead of the Gaming Control Board’s public hearing March 4 in Caernarvon.

Some anti-casino signs have sprouted on lawns, and opponents say they have no interest in transforming Morgantown into a gaming town.

“When we were in Las Vegas, there were a lot of prostitutes around, even in the airport,” said Jere E. Brady, 87, a retired teacher and artist who owns a gallery and curio shop on Main Street, where he planted an anti-casino sign. "We want what’s best for Morgantown, and this casino may not be what’s best.”

Styer, the chairman of the Caernarvon supervisors, said he believes most residents support the casino, and all but six of the opponents who spoke at the public hearing were from surrounding towns. “Most of them were trying to misrepresent themselves as members of this community," he said. “That’s what bothered me.”

But residents in surrounding towns say a community is not defined by the boundaries of a single municipality, and the casino’s impact study only considered economic effects, such as employment, tax revenue and impacts on traffic and sewers. They said the study should also include intangibles, such cultural impacts.

“You really are affecting three separate counties by the very nature of this community,” said Rohrer, who voted against the legalization of casino gaming in 2004 when he was a member of the legislature .

“It doesn’t fit into the community. It’s an infringement,” said Eaton Hopkins, who moved his family in 2017 from Malvern to Honey Brook, about four miles from Morgantown, partly to get into a quieter area. “It’s important for the gaming board to consider they are thrusting something on people that really don’t want it.”

Speakers at the public hearing reserved some of their most pointed criticism at the Caernarvon supervisors responsible for the decision, who they said should have conducted a public referendum on the proposal. But any discontent with the elected officials has not translated into a political backlash.

Two of the five Caernarvon supervisors who voted to allow a casino filed petitions by the March 13 deadline to run for reelection this year.