Nuclear energy supporters are working on legislation to bail out the state's nuclear industry, sparking a debate: Are nuclear power plants worth rescuing? And how much would it cost Pennsylvanians?

Lawmakers are expected to introduce legislation in the coming weeks that would provide financial support for nuclear power, paid for by every Pennsylvania electric customer. How many millions of dollars it will cost, or how much customers will pay, is yet to be decided.

But if some rescue is not approved by the General Assembly before its summer break, Exelon Generation plans to close the ailing Three Mile Island Unit 1 reactor near Harrisburg in September. That, and other planned nuclear plant closures, could leave thousands of workers out of jobs and significantly reduce competition among power producers, the industry says.

“The time has to be this spring, whether it’s February, March, April or May," said David I. Fein, senior vice president of state governmental and regulatory affairs at Exelon, the nation’s largest operator of nuclear power plants. “That’s the realistic window of opportunity before TMI will continue along a pathway of preparing for shutdown and ultimate decommissioning.”

The nuclear industry and its supporters in the legislature have engaged in a two-year campaign to prepare the political landscape for a rescue, carefully delaying debate until after November’s statewide elections. On the opposing side is Citizens Against Nuclear Bailouts — the natural gas industry, along with large industrial electricity consumers and the AARP. Both sides are stockpiling research and position papers like armies massed at the border.

“They’re definitely aiming for this spring, the nuclear industry that is,” said Steve Kratz, a spokesman for Citizens Against Nuclear Bailouts. “We’re aiming for never.”

The industry’s advocates say a proposed rescue would involve adding nuclear energy to the state’s Alternative Energy Portfolio Standards Act, a 2004 law that requires electricity distributors to buy 18 percent of their power by 2021 from producers of renewable or alternative energy, including generators that use waste coal, landfill gas, wood waste, or municipal solid waste.

The cost to consumers of a nuclear subsidy would depend upon how much of a market share the lawmakers allotted to a clean energy standard that includes nuclear energy. It could be big — nuclear generators in 2017 supplied 39 percent of Pennsylvania’s electricity demand, according to federal Energy Department data.

Nuclear supporters argue that the industry is a big employer in Pennsylvania and that the industry produces 93 percent of the state’s zero-carbon electricity. Three Mile Island Unit 1 alone employs 675 people and produces more carbon-free power than all the state’s solar, wind, and hydroelectric plants combined. They say preservation of nuclear power assures a diverse and reliable energy mix. 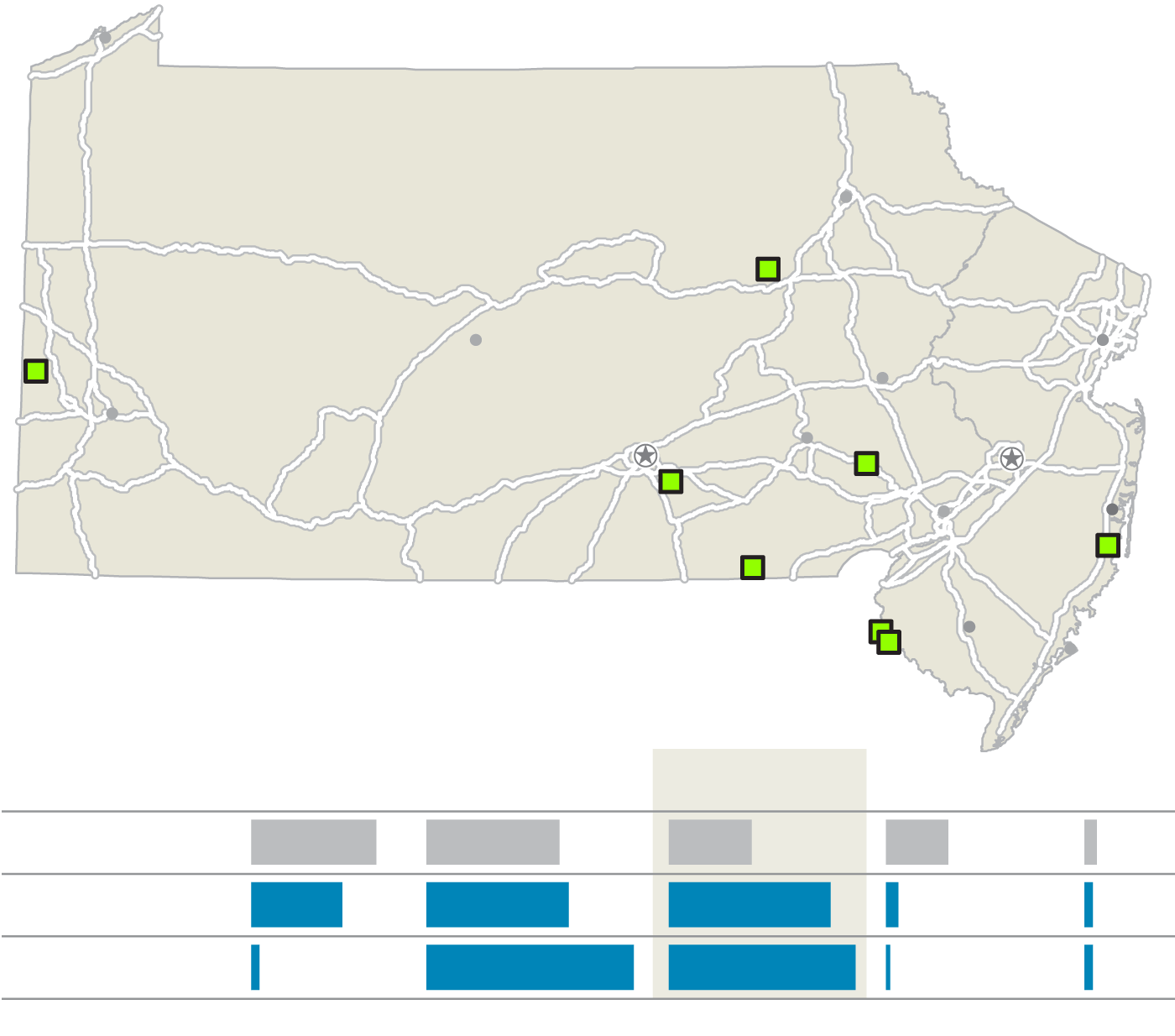 * Oyster Creek shut down permanently in 2018.

Gov. Tom Wolf is yet to weigh in on a nuclear bailout, but he signed an executive order this month proposing an ambitious 26 percent reduction of greenhouse gas emissions statewide by 2025 and an 80 percent reduction by 2050. It would be difficult to meet those goals without nuclear power, since the only practical replacement energy source on the same scale would come from new carbon-emitting natural gas plants.

Exelon successfully deployed those arguments in Illinois and New York, where it threatened to close reactors, and in New Jersey, where it is a minority partner with PSEG Nuclear in the Salem Nuclear Power Plant. All three states passed nuclear subsidies, costing taxpayers hundreds of millions of dollars, following extensive lobbying efforts.

“Pennsylvania, as the second-largest nuclear-power-producing state, needs to show some leadership here,” said Martin Williams, business manager of Boilermakers Local 13 in Philadelphia, which represents contract workers at four nuclear sites in eastern Pennsylvania, including TMI. “I worry about the signal sent if we do nothing.”

Opponents say consumers should not have to rescue struggling nuclear power plants that are unable or unwilling to sell electricity at prices set by the marketplace, especially in Pennsylvania, where energy costs have declined thanks to cheap natural gas produced from fracking of shale. They characterize the subsidies as “corporate welfare" and “a regressive tax on electricity."

Critics also say the nuclear industry uses worst-year data from 2016 that paints a dire financial outlook for the state’s reactors. A study done last year by economist Joseph Bowring, the market monitor of the regional power grid, PJM Interconnection, projected that the five Pennsylvania nuclear power plants would have a combined operating surplus of $640 million in 2018, which is estimated to fall to $141 million by 2021.

Exelon’s Fein disputes the profit calculations, but said his company still plans to shut down TMI, which is losing money. First Energy Corp. announced last March that it would retire its two Beaver Valley reactors near Shippingport in 2021.

“This is an industry-wide problem that has to do with flawed market designs that do not reflect the cost of pollution, and therefore fossil generation is able to not pay the cost of pollution they emit into the air that we breathe," said Fein. "As long as that inequity exists ... you’ll continue to see these same problems affect the rest of the nuclear fleet in Pennsylvania.”

The Nuclear Energy Caucus, a bipartisan legislative group that is committed to supporting the industry, released a study in November that presented its case for subsidies. The caucus study argued the industry contributes $2 billion to the state’s economy, accounts for 15,900 direct and indirect Pennsylvania jobs, and is responsible for $69 million in state taxes. It also says that consumers will pay more for electricity if nuclear plants shut down because natural gas plants would face less competition.

Supporters believe that revising the Alternative Energy Portfolio Standards (AEPS) to include nuclear power presents a politically palatable mechanism for subsidizing the industry because it uses an existing law with which policymakers are familiar rather than creating a new nuclear-only bailout.

The 2004 AEPS law, which stepped up the amount of renewable and alternative power required with each passing year, adds less than 1 percent to monthly electric bills, according to a report issued last year by the Pennsylvania Public Utility Commission. The costs are relatively low because Pennsylvania allows out-of-state power producers, including Great Plains wind farms, to supply the Pennsylvania market.

The Pennsylvania Environmental Council on Wednesday lent its support to calls to rethink the AEPS by calling on Wolf and the General Assembly to take immediate steps to reduce emissions of climate-changing gases, including adopting a clean energy standard to replace the current AEPS.

The aim of the initiative is to encourage low- and zero-carbon-emission energy sources “including renewables, nuclear, and fossil fuels with carbon capture technologies,” said the council’s president, Davitt Woodwell.

Woodwell said the council did not coordinate its announcement with the nuclear industry, although he said the retirement of any reactor would be a step backward in the effort to reduce carbon emissions.

“Pennsylvania must take concrete specific actions to putting the pathway in place to reduce carbon emissions significantly,” he said. “As that’s part of the discussion around nuclear, that’s great. If it’s part of the discussion around the governor’s executive order, that’s great. We’re ready to work with all kinds of parties.”

Regardless of the climate benefits, environmental advocates are divided over supporting nuclear. Any proposals to give nuclear energy equal value to renewable power in a reimagined Clean Energy Standard will attract resistance from anti-nuclear activists, who are worried about reactor safety and unresolved issues related to the long-term disposal of atomic waste.