The story begins in January 2005 with Andrea Constand, who alleged that Cosby had drugged and sexually assaulted her. As the story became public, 13 other women came forward with similar accounts, but a month later, the Montgomery County district attorney closed the case.

It wasn’t until 2014, after a video of Hannibal Buress calling Cosby a rapist went viral, that Constand’s story really took off. Sixty other women came forward with accusations about Cosby drugging and sexually assaulting them, which ultimately prompted the DA’s Office to reopen the case in 2015.

Cosby’s first trial, in 2017 — for three counts of aggravated indecent assault against Constand — ended in a mistrial due to a deadlocked jury. But he was convicted in 2018 at his second trial, which allowed testimony from five other accusers and a defense witness, Margo Jackson, who said Constand told her she framed Cosby for money.

Cosby is serving a three- to 10-year sentence in a prison outside Philadelphia.

On the morning of January 13, 2005, 31-year-old Andrea Constand woke up sobbing from a nightmare. Horrifying, violent dreams had plagued her for the past year, and they were growing worse. Sometimes they made her scream out so loudly that her parents could hear her from their bedroom. Other times she woke up sweating, shaken. This time her dream was so frightening that she phoned her mother, Gianna.

Gianna was on her way to work when her cell phone rang, and she answered it right away. She had been worried about her younger daughter. “I knew something was wrong, but I could not put my finger on it,” Gianna said.

That morning, though, Andrea was finally ready to tell her mom what had been tormenting her.

She’d been learning about physical boundaries in massage school, and the lessons had triggered something in her subconscious that she could no longer avoid. In her dreams she watched a woman being sexually assaulted in front of her, and it was all her fault. She was consumed with guilt that spilled over into her waking hours, terrified that other women were being similarly violated because she hadn’t spoken out.

Until that day Andrea had told no one about the night when a friend of hers — an older man who had become a father figure and, really, a mentor — had betrayed her in the most horrific way possible.

But now it was time. Lying in bed with her tears still wet on her face, she picked up the phone and called her mother.

“Mom, I think I have PTSD,” she burst out. Then she went on to say Bill Cosby drugged and raped her.

Gianna froze, then began to shake. She knew the famous entertainer had mentored Andrea when she was working as the director of operations for the women’s basketball team at Temple University. He sat on the board of trustees and was one of its most famous alumni, and Andrea had met him on campus. Cosby had taken her under his wing, inviting her to dinners with high-powered educators and out to concerts, making her feel at home in a strange city, far away from her family and friends.

Gianna had met Cosby too. A couple of years before, Cosby had gotten tickets for Gianna and her older daughter, Diana, to see him perform in Toronto. Cosby had been charming and avuncular to both as Gianna and Diana thanked him for the tickets.

Andrea was insistent. It was as if she’d waited this long to tell the truth, and now that she had, she couldn’t stop. “Mom, you’ve got to hear me out,” she said. Then she said it again: Bill Cosby drugged and raped me.

That sentence set off a chain reaction of events that would change her life, her family’s lives, and, most irrevocably, that of the man she had just accused. 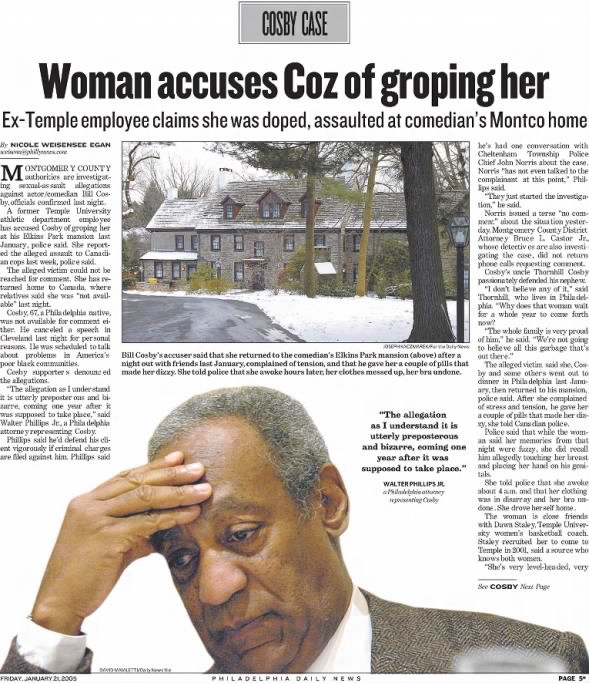 Cosby, then 67, was a beloved national father figure. He was one of the most powerful men in Hollywood and in his native Philadelphia, which reveled in being able to claim America’s Dad as one of its own. Andrea was terrified at the thought of reporting the crime to police, but she knew she had to. She didn’t want what had happened to her to happen to anyone else.

“I was really scared, and I wanted to protect myself,” she said. “I didn’t know where to turn. I had a lot of questions. And then I thought that Mr. Cosby” — she always called him Mr. Cosby — “would retaliate against me, that he would try to hurt my family.”

That week was a surreal one for Andrea. While she was conferring with lawyers and making phone calls to law enforcement, a police source tipped off Harry Hairston, an investigative reporter for Philadelphia’s Channel 10, the NBC affiliate. The allegations against the entertainer broke on Channel 10’s five o’clock evening newscast on Thursday, January 20, and soon the world learned that a Temple University employee had accused Bill Cosby of groping her. The details were sketchy at first — the drugging part not so clear in that first story.

I was just starting to wrap up for the day at the Philadelphia Daily News, where I’d been a crime investigative reporter for 14 years, when the news hit the airwaves and my boss assigned me the story. Few details about the case were being released, including the alleged victim’s name, which is the norm in such cases. I needed to somehow find out all I could about her to figure out if she was credible. No one in law enforcement was talking, but thankfully I had sources at Temple who were able to fill in some blanks, including supplying me with her name. I didn’t publish it until we had her permission, which is the usual media policy with sexual assault victims — though that would quickly change with this case.

Andrea had a stellar reputation at Temple, where she’d worked as the director of operations for the women’s basketball team from late 2001 through March 2004. “She’s straight up, stable, smart, and hard-working,” a former colleague said. “She’s very level headed, very professional.”

With her long, curly, reddish-brown hair and statuesque physique, standing six feet tall, Andrea was strikingly attractive. A former high school and college basketball star who’d once dreamed of playing for the pros, Andrea had been recruited for the job by Dawn Staley, the Temple women’s coach, who was also a close friend of Cosby.

Cosby would regularly show up unannounced at women’s games. Part of Andrea’s job was building the team’s profile in the media, and who better to help with that than the Cos himself?

Andrea had no criminal record, and the only news clippings I found about her were of her illustrious basketball career. In fact, she was one of the top female basketball players in Canada while she was in high school.

Her stellar performance at basketball training camps and tournaments caught the eye of fifty or so coaches in America who actively recruited her, including the University of Connecticut, Michigan, Cincinnati, and UNC-Charlotte.

“Everyone in the United States knew about her,” Joan Bonvicini, the head coach for Arizona’s women’s basketball team, told me. “We recruited her pretty hard.”

Andrea chose Arizona, which offered her a full scholarship worth about $80,000. Arizona had an abysmal 6–25 record, but she hit it off with the coach and liked the players, who made her feel at home.

Andrea, a guard forward, was popular both on and off the court, Bonvicini said. She didn’t want to comment on Andrea’s allegations but did tell the Associated Press, “She’s always been honest and upstanding. ... I’ve never known her to lie.” Andrea had the same reputation at Temple. “She was serious about her career and serious about her sport,” the former colleague told me. “She was always trying to do what was best for the team.”

Andrea and Cosby’s friendship began about a year after she arrived at Temple in December 2001. After a donor introduced them at a women’s basketball game, they struck up an amiable rapport. While she viewed him as a grandfather figure — he was more than double her age — he would later say he had his eye on a romantic relationship with her from the start. But Andrea, who was involved with a woman at the time, was clueless. To her, Cosby was a genial, generous mentor, a gentle adviser.

Over the next 14 months their friendship deepened, and one day, while pondering a life change, Andrea reached out to Cosby. She wanted to quit her job and enroll in massage school to become a massage therapist like her father, Andy, but she was nervous about how to tell her boss. So she went to her friend and mentor for advice. At first they spoke on the phone, and then he invited her to his home to talk more that evening. A few hours later Andrea headed over, relieved. Cosby was someone she could confide in as she began heading toward yet another crossroads in her professional life.

There was nothing unusual about his invitation to his mansion in January 2004 to discuss her career. Except for how it ended.

Nicole Weisensee Egan will speak about her book at the Free Library of Philadelphia, 1901 Vine St., at 7:30 p.m. on April 30. She is working on her second book, “Victim F: The Story of the So-Called Real Life ‘Gone Girl,’ " with coauthors Denise Huskins and Aaron Quinn. NicoleWeisenseeEgan.com.