One of New York's most established real-estate companies has bought an assemblage of piers along the Delaware River for eventual development into an apartment complex, vindicating efforts to spur private investment on the Philadelphia waterfront by enlivening its public spaces.

The Durst Organization, which counts Manhattan's One World Trade Center and 4 Times Square office buildings among its holdings, bought the four Delaware River piers just north of the Benjamin Franklin Bridge this month from Brandywine Realty Trust for $21.4 million, in what the company said is its first acquisition outside New York state.

The properties, collectively known as the Philadelphia Piers at Penn's Landing, encompass about 5.3 acres. They are the current sites of waterfront restaurants – Dave & Buster's, Morgan's Pier, and Hibachi Japanese Steakhouse – as well as a marina and a parking lot.

In an interview, Alexander Durst, chief development officer, said the company was drawn to the site by its existing public spaces, such as the Race Street Pier, and the long-discussed plans for a park over Interstate 95 that would connect Old City with Penn's Landing. Last month, those plans received about $190 million in city and state funding commitments.

"There's quite a bit of potential on that waterfront," Durst said. "There's a lot of transformation that may continue to occur from a post-industrial site to something more recreational and residential."

The company's plans for apartments at the site are in their very early stages, and it will be years before any work can begin, Durst said. One consideration, he said, is Dave & Buster's lease, which lasts until at least 2020 on one of the assemblage's most readily developable piers.

Morgan's Pier, meanwhile, has at least 15 years remaining on its lease, according to Avram Hornick, managing member of Four Corners Management LLC, which operates the riverfront beer garden.

The Durst Organization has bought the four Delaware River piers just north of the Benjamin Franklin Bridge, collectively known as the Philadelphia Piers at Penn’s Landing, from Brandywine Realty Trust for $21.4 million. The prominent New York real estate firm plans to develop the site into an apartment complex. 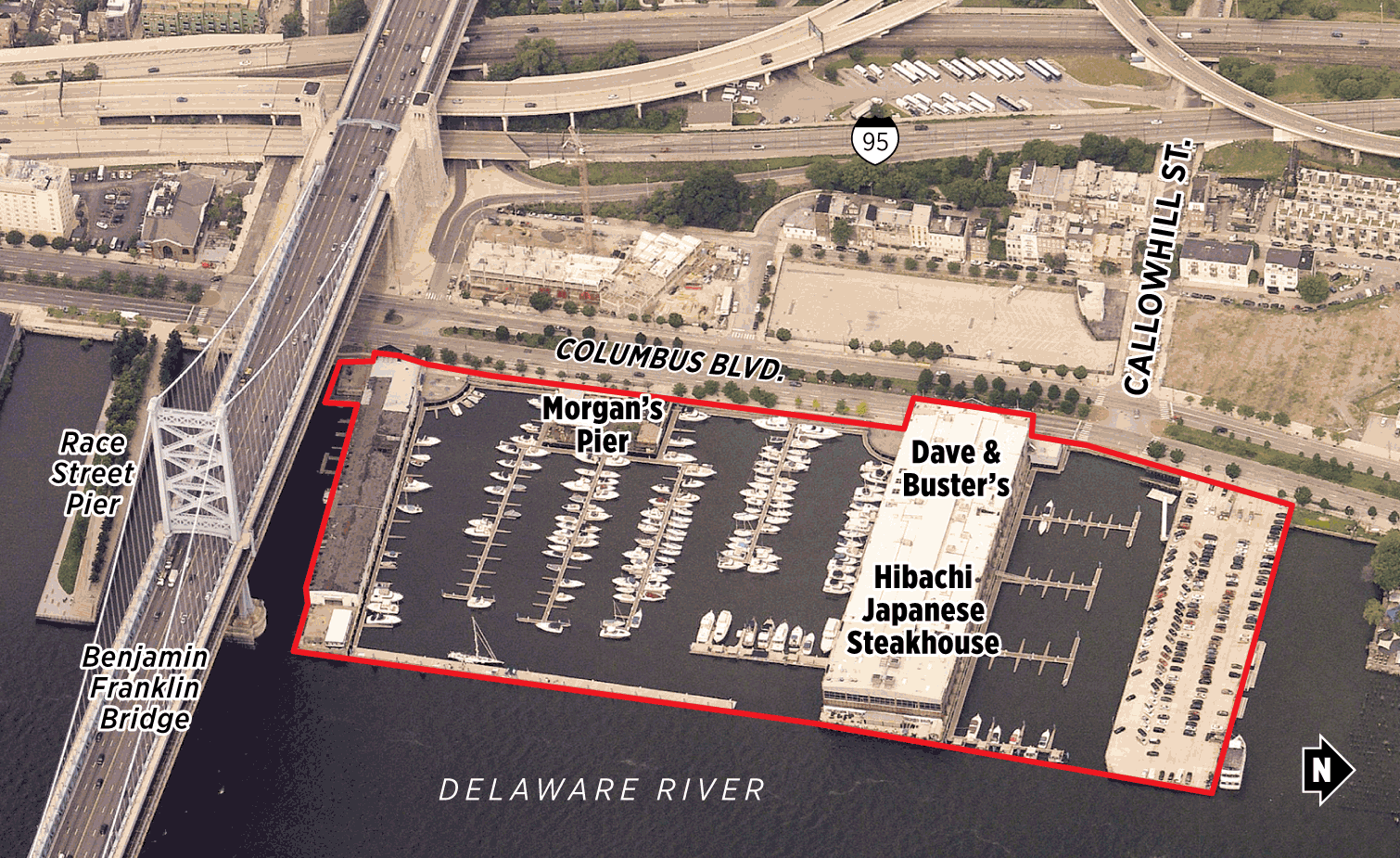 The Durst Organization, which was founded in 1915, owns 13 million square feet of Manhattan office space and nearly 2,000 rental units, with another 2,400 under construction, according to its website.

Having such a company focus on Philadelphia's riverfront shows that efforts to develop parks and other public spaces in that area are paying off, said Joe Forkin, president of the nonprofit Delaware River Waterfront Corp.

The DRWC has used public funds and philanthropic donations to transform disused piers up and down the central Delaware riverfront here into public plazas and has been assembling property for a bicycle and walking trail from Fishtown to South Philadelphia.

Its other initiatives have included the Spruce Street Harbor Park summertime hangout, with its food stands, hammocks and lawn games, and the Blue Cross RiverRink ice-skating attraction.

These "small, implementable" projects provided momentum for bigger proposals such as the I-95 cap, which in turn have caught the attention of investors who might otherwise overlook Philadelphia, Forkin said.

"All of that leverages companies like Durst having an interest in Philadelphia's waterfront, saying, 'Wait, what's going on down there?' " Forkin said.

Other area development sites include PMC Property Group's recently completed One Water Street residential building across North Delaware Avenue from the Durst acquisitions and the city-owned Festival Pier a short distance to the north, where Jefferson Apartment Group and Haverford Properties have plans for a complex of homes and shops.

The piers bought by Durst had been acquired in 1998 by Radnor-based Brandywine Realty Trust, which mulled various development proposals for the site over the years, chief executive Jerry Sweeney said in an email.

Brandywine decided to sell the properties as part of its focus on the western part of the city, such as its work with Drexel University on the Schuylkill Yards master-planned development in University City, Sweeney said.

"We felt it was an opportune time to harvest value and deploy that capital into other areas," he said.

Durst's interest in Philadelphia, meanwhile, comes amid a pivot from its longtime central Manhattan focus, where rising property costs have made development less profitable, Alexander Durst said. Further recent acquisitions by the company away from its traditional Midtown turf include development sites in Harlem and Astoria, Queens.

Other New York-based investors buying up high-profile development sites in Philadelphia amid diminishing returns back home include HFZ Capital Group, which is part of a consortium with plans for a new complex of homes, offices, labs and start-up work spaces around Amtrak's North Philadelphia station.

"On a macro level, we see a lot of fundamental strengths in Philadelphia that we believe exist in New York," he said. "We feel very comfortable here."