Bristol joins Bensalem Township in announcing a bid for the Amazon campus.

Bristol Township in Bucks County is the latest Philadelphia-area community to say it's making a run at attracting Amazon's proposed second headquarters, with plans to offer a nearly 800-acre riverfront site for the e-commerce giant's use.

Township officials say in their proposal to Amazon.com Inc., which they plan to submit on the company's Thursday deadline for receiving pitches, that their community offers "a diverse, welcoming community that is on the rise, government leaders who make decisions quickly [and] a talent pool so deep we need Michael Phelps to lifeguard." 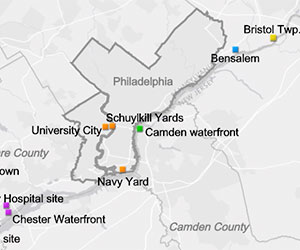 Bristol joins Bensalem Township in announcing a bid for the Amazon campus. Bids are also expected from Philadelphia, Camden, Delaware County and Chester City, the state of Delaware and New Castle County, and other regional communities.