With Philly's scene maturing, the search is on again for more Stellar Startups

Next weekend, thousands will participate in one of Philadelphia's most popular races, the 10-mile Broad Street Run. Chief among their goals will be to reach the finish line at the Navy Yard having done no damage to knees, hips, and ankles.

The next day, Jeffrey O'Donnell will be at work, where diagnosing and treating such injuries faster and less expensively is the objective of his five-year-old King of Prussia start-up, Trice Medical. The company of 35 employees and $21 million in venture capital has developed mi-eye 2, a hypodermic needle with a small camera tethered to a Microsoft Surface tablet. With some numbing, it can be used on an orthopedic patient on an initial visit to the doctor to diagnose, for instance, a torn ACL or meniscus without the need for an MRI.

The mi-eye 2 costs about one-third what an MRI costs (reimbursement varies greatly throughout the country) and does not require a trip to a hospital or imaging facility, O'Donnell said. FDA-approved and on the market since the first quarter of 2017, mi-eye 2 has been used more than 3,000 times, primarily on shoulders and knees, with more than 10,000 procedures projected by the end of the year, he said.

That's the sort of success most new enterprises can only dream of,  and the kind  Philadelphia Media Network hopes to propel others into with its second Stellar StartUps competition as the city attempts to grow its reputation as fertile ground for emerging companies.

It's also why what O'Donnell said about his future plans should be a psychological boost to the local start-up community: "I'm here to stay." 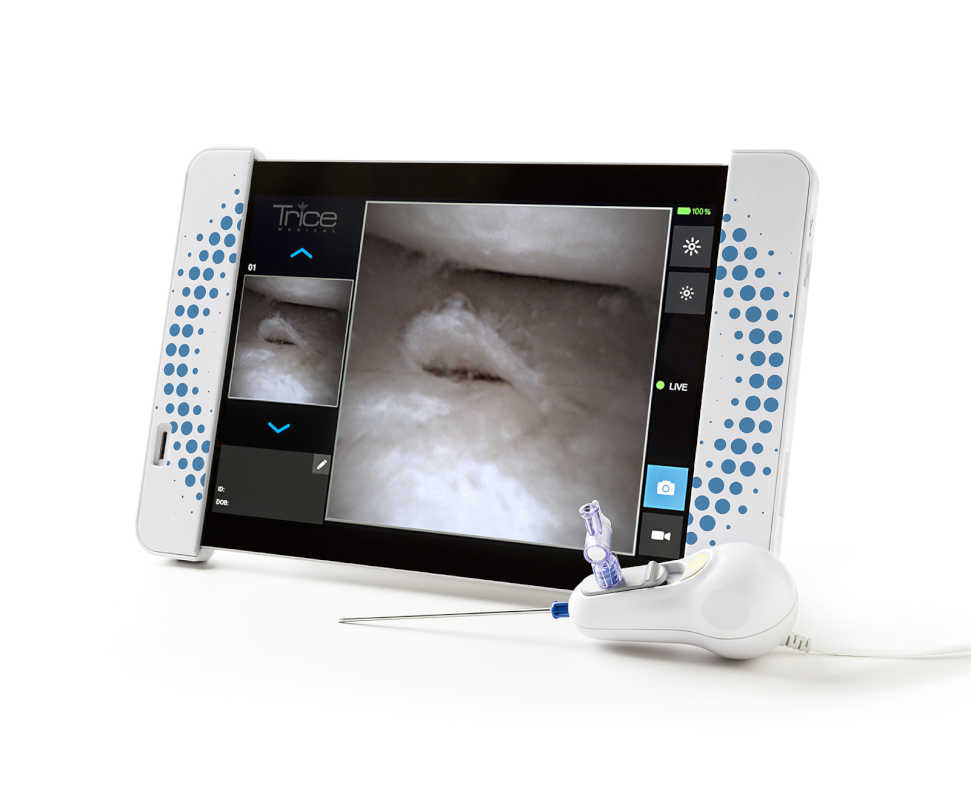 Trice Medical's Mi-Eye enables doctors to diagnose a sports-related injury in the office, without an MRI. It consists of a hypodermic needle with a small camera tethered to a Microsoft surface tablet that shows high-definition pictures. Seen here is a meniscus tear.

Although Silicon Valley and other points on the West Coast remain a big draw, the medical school- and pharmaceutical-rich Philadelphia region is showing promise as a magnet for start-ups in a category that serial entrepreneur and venture capitalist Paul Martino calls “lean bio.” By that, he means health-care-related diagnostics, devices, and predictives.

“If I was going to tell you a story about how 10 years from now people were talking about why Philly is really one of the rising stars on the start-up scene, I think it will be because of lean bio,” said Martino, a Doylestown resident and cofounder of San Francisco-based Bullpen Capital. Bullpen provides funding to emerging companies that have already secured the first million or two in seed funding, but have not progressed enough to qualify for the next significant fund-raising target, Series A, which usually involves a minimum of $5 million.

“You talk about a place that Philadelphia can clean up in, we have all of the infrastructure for the hard sciences of it,” Martino said. “If we have a big hit over the next decade, I wouldn’t be surprised if it came from that kind of thing, rather than the next Snapchat. I don’t think we have a lot of the creative kinds of product geniuses hanging out on the consumer side here in Philadelphia. But we’ve got the bio geniuses hanging out here.”

PMN, parent company of the Inquirer, Daily News, and Philly.com, is seeking nominations for the 2017 edition of Stellar StartUps. Last year’s inaugural contest offered no prize money or guarantee of an investor, yet it attracted nearly 100 applicants. A panel of judges selected six categories of winners, who were honored at an event in September at the Pennovation Center in West Philadelphia headlined by serial entrepreneur and venture capitalist Josh Kopelman, chairman of the PMN board.

This year's awards event, which also will not include prize money, is set for Sept. 12 at the Fels Planetarium at the Franklin Institute. The deadline for nominations is June 16.

"We've purposely broadened the categories to be as inclusive as possible as our program is committed to spotlighting as many entrepreneurs in the region as we can," said Jennifer Wolf, director of special events for PMN. "We know that the more exposure they receive, the better chance their business will take off and ultimately benefit our community for years to come."

The call for nominations comes at a time when Philadelphia’s start-up scene is showing strong signs of maturity, said Stephen Zarrilli, chief executive of Safeguard Scientifics, which has, with other partners, provided $8.25 million in seed funding to four health-care-related early-stage companies in the last 12 months: Velano Vascular of San Francisco; MedCrypt of Philadelphia; COSY, a spinout from the University of Pennsylvania’s GRASP Laboratory; and VitalTrax, of Philadelphia. Safeguard also is an investor in Trice Medical.

One strong sign of that maturation was the sale earlier this month of Wayne start-up PetCoach to international pet retailer Petco.

“I’m heartened to see a better level of coordination occurring across the region in order to further solidify our entrepreneurial community here in Philadelphia,” Zarrilli said. “Up until a few years ago … we looked a bit disjointed in the Philadelphia region.”

That, he said, created a “challenging” environment for entrepreneurs to know where to find capital and other resources “to harness some of the momentum we may have been gaining.”

He credited First Round Capital, one of the first venture funds in Philadelphia, and Philly Startup Leaders, a support group for early-stage companies, with creating some of the cohesion that has led to the growth in the region’s start-ups.

Nevertheless, he remains frustrated, he said, “that we haven’t completed with enough pace the creation of environments for entrepreneurs and others who want to be a part of that entrepreneurial community.”

Though it was “good to see” Mayor Kenney helping pitch Philadelphia as a viable start-up incubator at this year’s SXSW, the weeklong tech/film/music conference in Austin, Texas, Zarrilli said, “city government needs to more fully understand how this could be more of a fundamental game changer.” He suggested there might be ways the city could help find funding at the state, county or local level that could be directed to organizations skilled at vetting start-ups and their potential.

The region’s universities also must play a role in fostering “that environment of learning and sharing," Zarrilli said, so that students with entrepreneurial potential “will want to stay” after they graduate.

“I’m a believer if you build a talent base, capital will flow to the region,” he said.

Trice’s O’Donnell, now chief executive of his sixth medical device start-up, left the region in the 1990s for California, when “there was a very, very small medical-device community in Philadelphia.” He returned in 1999.

“I always thought Philadelphia would be a boom town in the medical-technology business because of the many, many medical schools and the great engineering programs at Drexel and Penn and Villanova,” O’Donnell said.  Having almost every major pharmaceutical company represented within 100 miles of the city is an added benefit to boosting the region's health-care start-up niche, he said.

“What we need is more financial infrastructure here. There are not as many medical-technology venture-capital firms in the Philadelphia area," he said. "There's plenty of money in Philadelphia. It's just getting them to channel it to the med-tech business, which is a challenge."

We Recommend
‘Self-employed’ PPP winners have been largely white-collar. New Biden rules aim to change that.
Jacob Adelman
A dispute with Amazon forced this family-owned shipping company to retool its mission — and business took off
Kevin Riordan
As Congress scrutinizes gig worker rules, small-business owners need to know the basics
Gene Marks, For The Inquirer
Biden is tweaking the PPP rules to reach the smallest companies
Aaron Gregg, Washington Post
Start-ups are surging across the U.S. It may be a good to time to launch a home-based business in Philly.
Gene Marks, For The Inquirer
A pioneer Philly software maker is sold to a Latin American giant after a 27-year run
Joseph N. DiStefano
The Inquirer Business Weekly Newsletter