Actors in Elizabethan theater companies always kept multiple roles in their heads, because these troupes performed multiple plays within a short period of time. Actors learned their lines in advance, rehearsed for a few days, and let it fly. The Pennsylvania Shakespeare Festival recreates that hurried excitement in their current production of Love's Labour's Lost. Rehearsing for just a few days without the aid of a director, the actors stage an electrifying show that is a cross between Shakespeare and the improvisational comedy of Chicago's Second City.

Love's Labour's Lost is another one of Shakespeare's genre-bending adventures, a "comedy" that lacks a happy ending. The King of Navarre and his three love-smitten friends break their oath to live an ascetic life. They absurdly woo the Princess of France and her ladies in waiting, all of whom mock these would-be lovers unstintingly to the end. You get the comic idea: When it comes to matters of love, women are better grounded. 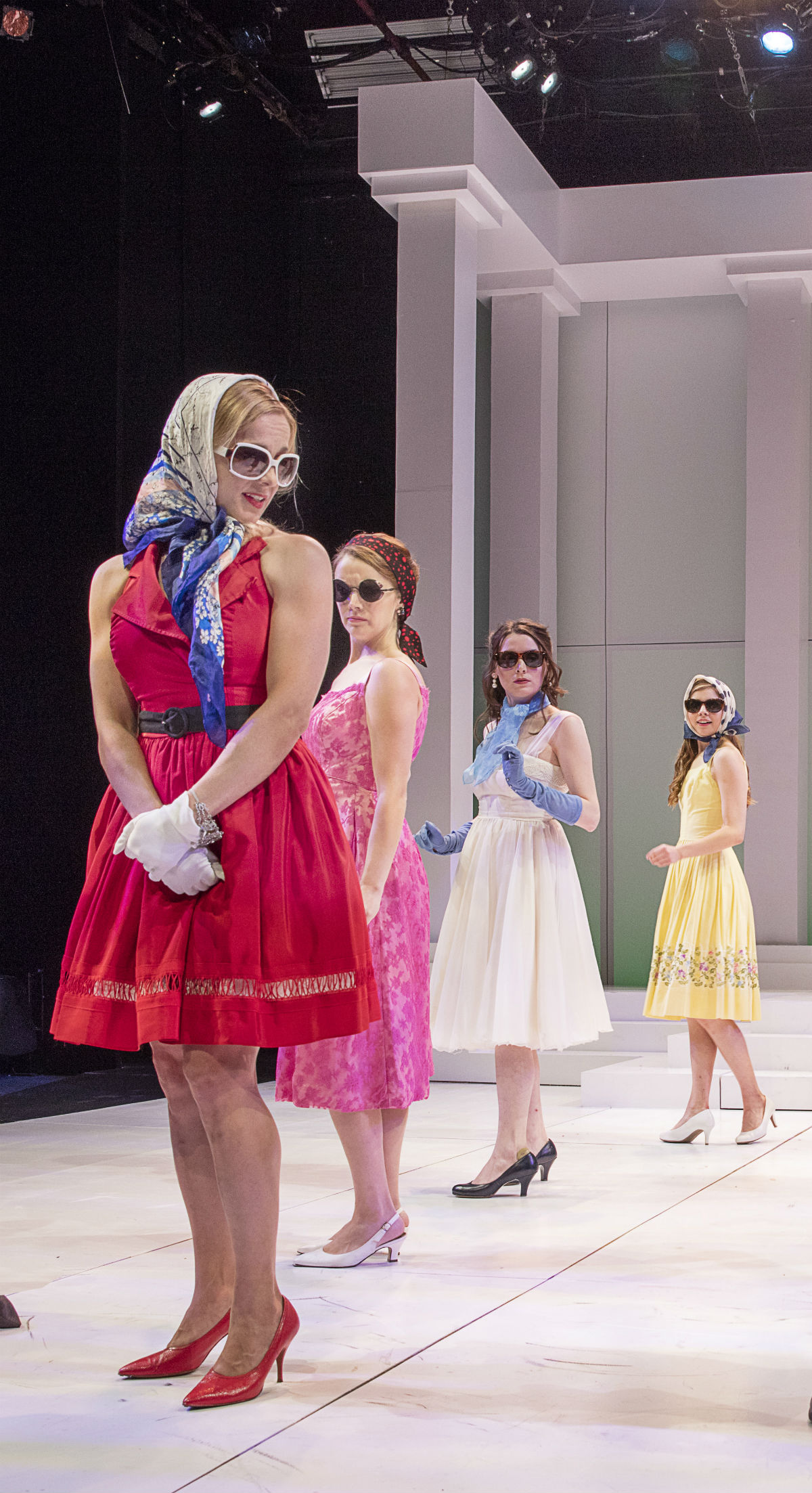 Tempting the King and his friends away from their studies are the Princess of France and her friends in Shakespeare’s Love’s Labour’s Lost at the Pennsylvania Shakespeare Festival. Left to right: Mattie Hawkinson, Marnie Schulenburg , Patti-Lee Meringo, and Stephanie Hodge. Photo: Lee A. Butz.

But Shakespeare's script is so verbally dense, so loaded with puns, malapropisms, full-blown sonnets, and abstruse language that you almost lose sight of its core idea. In this production, actor Christopher Patrick Mullen adapts the script, bringing Love's Labour's Lost to life as a fast-paced comedy by retaining all the major speeches but cutting out lots of witty but obscure passages.

In their place we see the riotous, physical antics of a dozen ridiculous men. The actors appropriate the stage set and lighting of another PSF play and come up with a collection of wild clothes. At one point, the ludicrous lovers disguise themselves as "Moscovites." Later, they watch a masque of "The Nine Worthies" put on by Commedia dell'arte types, doubly hilarious, since the love-worn men do not seem to realize that their own silliness is being comically mirrored.

Shakespeare's verbal genius still shines out. Each character speaks a distinctive form of verse, a virtual smorgasbord of poetry. As the wit Moth says, "They have been at a great feast of languages, and stolen the scraps." But in this show physical comedy competes with poetry, because you also come to know these men and women by how they look, mime, and act out. It makes for a very funny night.

We Recommend
That’s a wrap: Center City art house theater Ritz at the Bourse to close by the end of January
Gary Thompson
In Snoop Dogg — Snoop D-o-double g, if you must — you find a time capsule
Jesse Bernstein
Romo and Aikman calling today's games, but both have choices to make
Rob Tornoe
Board chair to lead process aimed at making Art Museum ‘free from misconduct of any kind’
Peter Dobrin
ESPN once again whiffs while airing footage of Philadelphia
Rob Tornoe
‘It’s terrifying’: Australian rocker Courtney Barnett on watching her country burn
Dan DeLuca
We Recommend
Inquirer Morning Newsletter