The Philly cop who doubled as theater 'critic,' monitor of decency

En route to Broadway in November 1932, the frothy musical starring Ethel Merman and Jack Haley had opened at the Garrick Theater on Chestnut Street to equally frothy reviews.

But one critic had some issues.

"This performance was a musical comedy, one of the best appearing in these parts since 'No No Nanette,' " he wrote. It had "plenty of tuneful music, [catchy ]airs and good wholesome and spontaneous humor, but here and there a tendency to detract from a good clean show by going into vulgar burlesque.

"There are a number of puns which the show could well do without, and a few remarks which could easily be toned down or eliminated entirely." 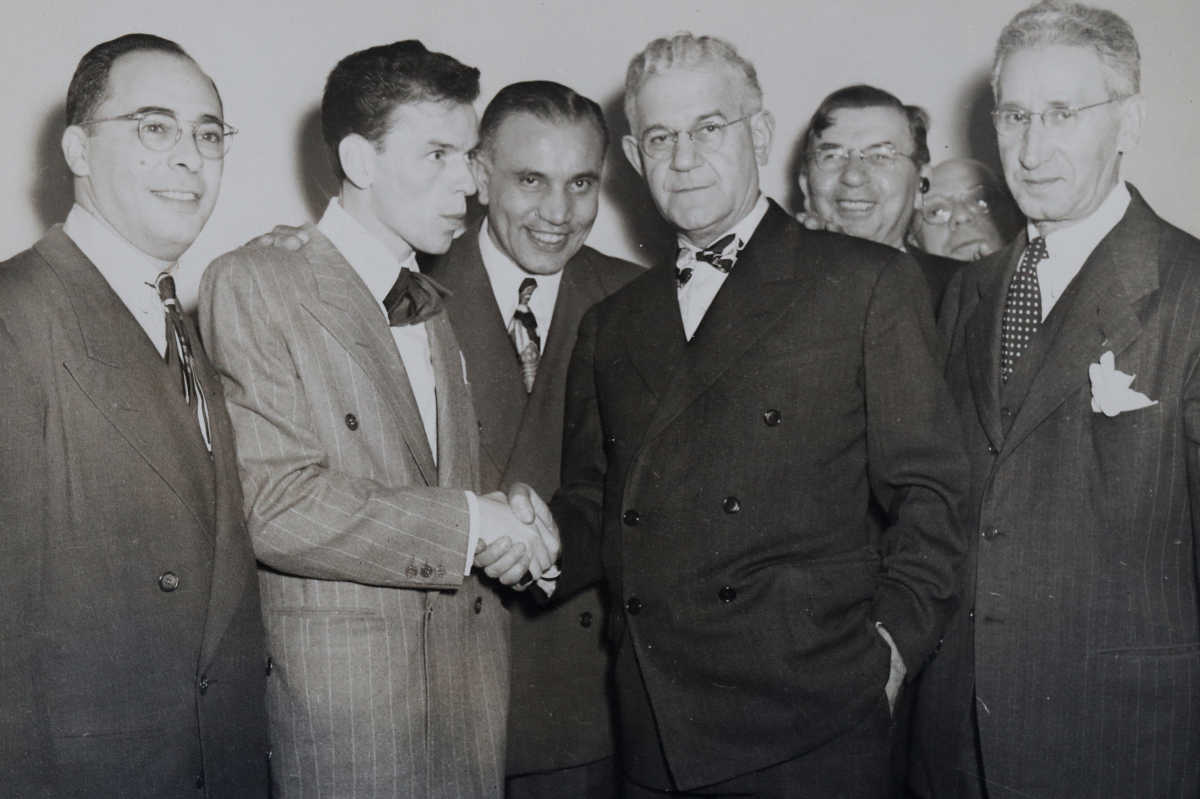 Jake Gomborow with Frank Sinatra.
Things to Do Newsletter

This wasn't mere journalism. The reviewer's tut-tutting was not meant for readers of the Inquirer, Bulletin, or Public Ledger, the city's leading dailies.

It was in fact a police report, written by a city detective named Jacob Gomborow, one of the most colorful and prominent Philly cops of the early 20th century.

Throughout the 1920s and 30s, when he wasn't upholding community standards for theatrical decency, Gomborow headed the police department's radical squad. Starting in World War I, when he filed reports on local appearances by anarchist Emma Goldman, Gomborow led department efforts to keep track of (and at least occasionally suppress) local communists, fascists, Klansmen, Nazis, and more.

Frequently mentioned in press clippings up until his retirement in 1950, Gomborow's name has faded over the decades. Hardly anyone still alive remembers how, as one of the highest-ranking Jewish officers on the Philadelphia police force, he served as official escort for visiting celebrities from Albert Einstein to Eleanor Roosevelt to Frank Sinatra. Or how, somewhat less officially, he acted to defend Philadelphia's Jewish community during decades of rampant anti-Semitism.

That may soon change. Gomborow's papers, lovingly kept since his death in 1954 by his daughter, Dorrie Sider, are about to become part of Temple University's Urban Archives. Hundreds of rarely seen reports, photographs, and press clippings will give researchers a window into almost a half century of political, criminal, social, and even theatrical history. 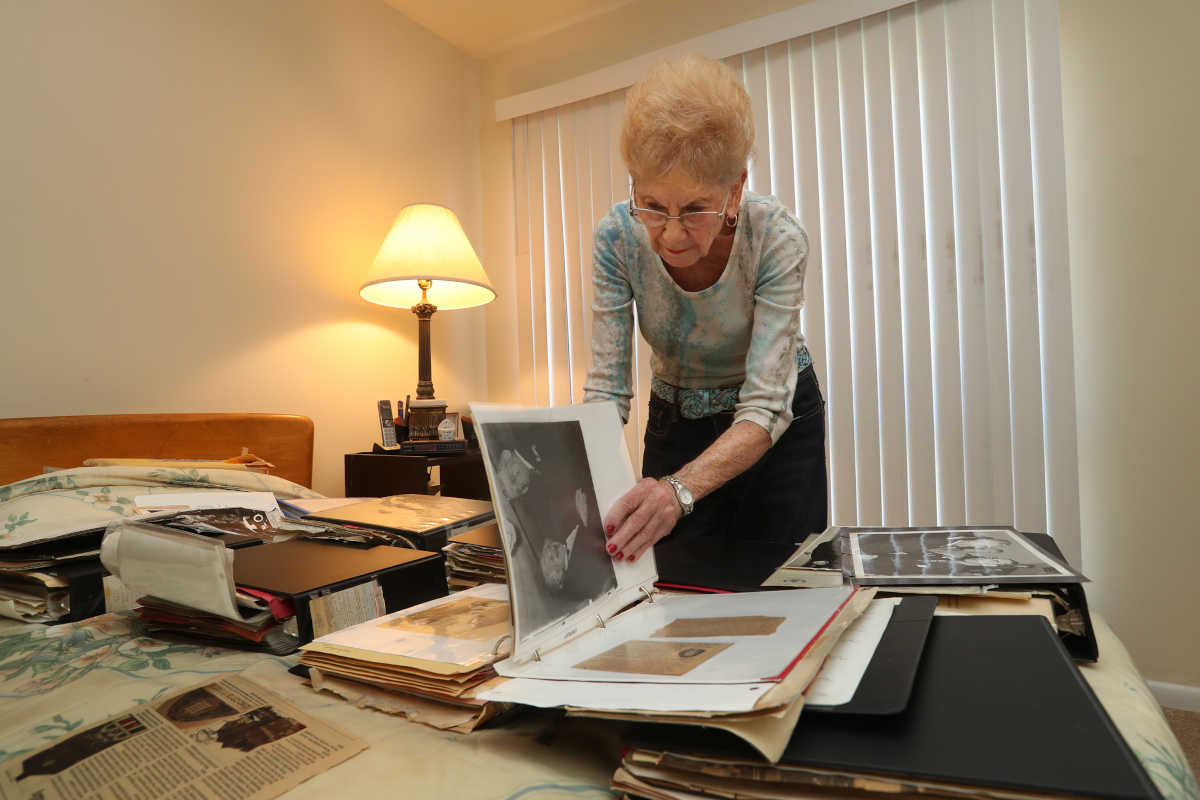 Dorrie Sider, daughter of Philadelphia Policeman Jake Gomborow, has kept up the family archives of the people her father met who had visited Philadelphia during his time on the force.

Today, when theatrical nudity is no big deal, and a stage like the Arden can blithely promote a show with the f-word in its title (albeit with an asterisk), it may be hard to imagine how risqué puns and controversial social themes once brought police attention to local productions.

But they did. And for most of two decades, Detective Sgt. Jake Gomborow was usually the cop on the aisle, filing reports that read much like theater reviews, but with a constabulary twist.

"The acting in the entire play, aside from the few vulgar and sacrilegious remarks, was weird and gruesome, and in my opinion, the average audience in any theatre would have walked out before the show was over.

"My reason for not stopping the performance was because it is in its first American appearance. ... I also received information that it was here for one performance only, thence proceeding to Greenwich Village in New York ... "

He was more enthusiastic after seeing Adam Had Two Sons at the Garrick in January, 1932: "The play, with a moral, is finely acted by principals and contains a dialogue that ranges from stretches of cheap unpardonable lines to passages that are realistic and intelligent, and the acting during the climaxes is about as fine as I have ever seen played in this City."

Whether the police actually pressed the show's producers to remove the "cheap unpardonable" dialogue isn't recorded in Gomborow's papers. On other occasions, however, he wasn't shy about stopping the show if it offended his or the community's morals.

In 1927 the Workers Theatre Alliance, a progressive-alternative group, attempted to stage a satire called Mr. God Is Not In. On a tip that the show promoted atheism, Gomborow confronted the director, Alfred Sobel, and demanded to see the script. "After a very short perusal of same ... I informed Mr. Sobel this play would not be allowed to go on as far as the Police Department was concerned," he later reported.

Gomborow was hardly Philadelphia's first theatrical censor, of course. William Penn himself tried to prohibit stage shows in his new colony but couldn't make the ban stick, and the city became the cradle of American theater. Still, the struggle between art and community sensibilities continued well into the 20th century. 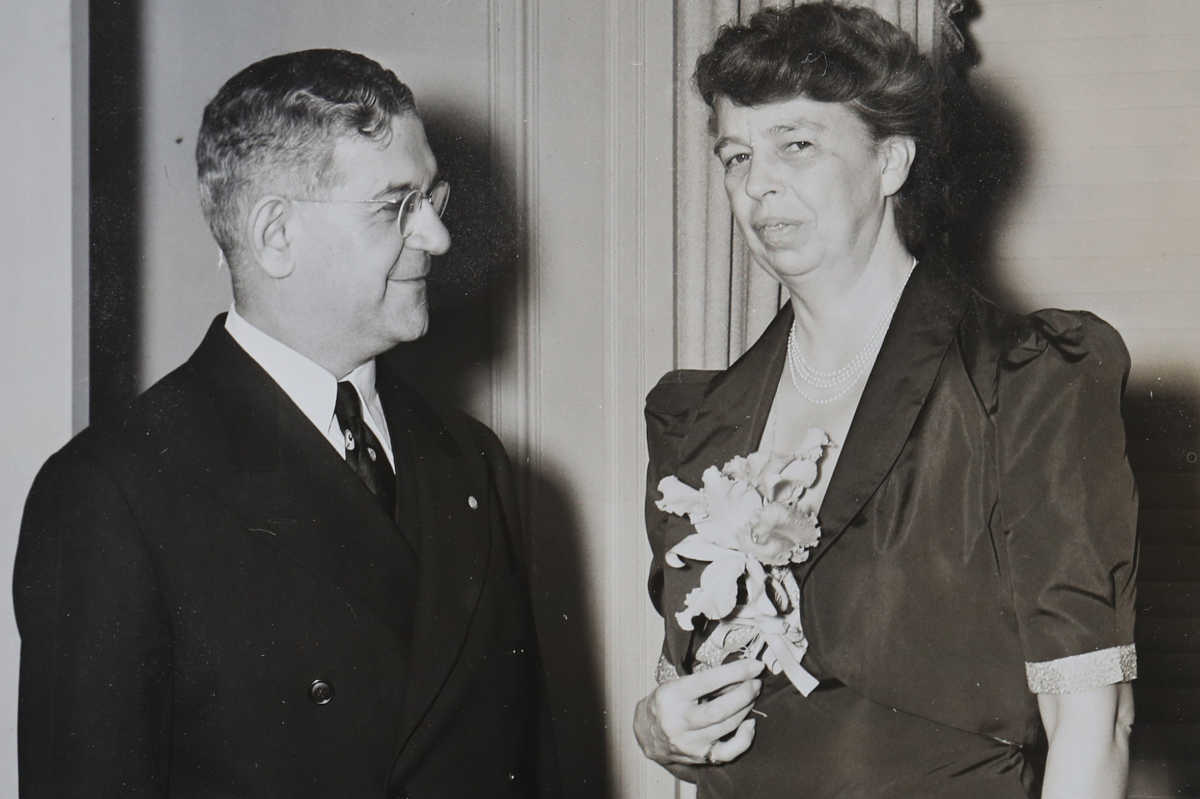 Mayor James Tate moved to close a production of Brecht's Threepenny Opera in the early 1960s (prompting a New Jersey playhouse to promote the show as "banned in Philadelphia"). And in 1968, members of the experimental Living Theatre were arrested here for indecent exposure.

But down the centuries, it's unlikely many Philadelphia bluenoses sniffed at local stage productions with quite the relish that pervades Gomborow's police reports. In February 1936, after a chaplain at the University of Pennsylvania urged the cops to bar a travelling production of Tobacco Road (already banned in Chicago and Boston), Gomborow was dispatched to opening night at the Forrest Theatre. His report mentioned the play's morality only in passing and concluded that it was some of "the finest and best dramatic acting I have had occasion to review."

If anything, Gomborow's reports suggest a somewhat less censorious hand than many Philadelphians may have wanted. After seeing a production of the vaudeville review Vanities in 1932, he wrote: "I am of the opinion that not only are the jokes in this performance too mild for objection, but have been deliberately toned down for a Philadelphia stay, and I am satisfied that unless faster and more suggestive humor is injected into this show, it will be a 'Flop' in New York."