Posted: November 25, 2016
Collected Essays on Evolution, Nature, and the Cosmos

nolead ends Loren Eiseley was a rare sort of intellectual, adept across multiple disciplines and capable of capturing the most puzzling scientific phenomenon of his day in lyrical and crystalline prose that nonscientists could appreciate. The Library of America and editor William Cronon have recently enshrined his Collected Essays on Evolution, Nature, and the Cosmos in a monumental two-volume set that serves as a treasure trove of 20th-century science writing.

Born in Nebraska in 1907, Eiseley studied English as an undergraduate and then anthropology and geology in graduate school before earning a Ph.D. at the University of Pennsylvania. After a few early academic appointments in the Midwest, he returned to Penn, where he spent the remainder of his remarkable career. In 1961, the university created a unique interdisciplinary position specifically for him. His death in 1977 - by which time he was the Benjamin Franklin Professor of Anthropology and History of Science - silenced a singular voice in American letters, one well worth revisiting. 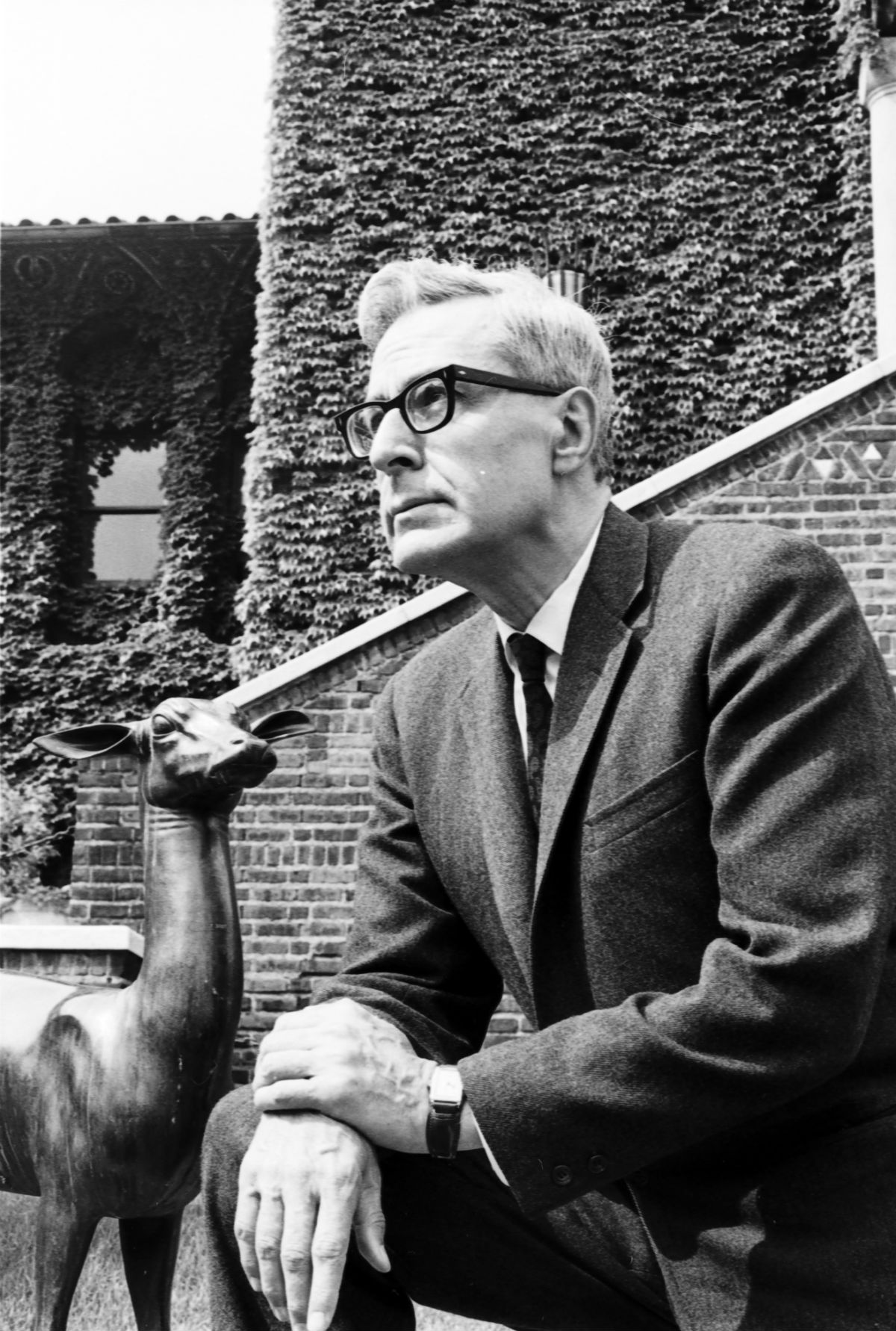 Loren Eiseley at the University of Pennsylvania. Photo: Frank Ross.

Volume One of this set contains three early essay collections, The Immense Journey (1957), The Firmament of Time (1960), and The Unexpected Universe (1969), as well as a few previously uncollected writings. Volume Two brings together his later books The Invisible Pyramid (1971), The Night Country (1971), and some essays from his remarkable The Star Thrower (1978). Taken together, this life's work can be daunting, even overwhelming. It took me weeks to read. Although I wanted to rush ahead to the next revelation, I continually found myself comfortably mired in the lush prose.

Among his seemingly limitless talents, Eiseley also mastered the art of writing an opening hook. Here are a few first lines from his essays, many of which begin with tempting generalizations about humankind:

"Man, it is well to remember, is the discoverer but not the inventor of fire."

"It is a remarkable fact that much of what man has achieved through the use of his intellect, nature had invented before him."

"It is a commonplace of all religious thought, even the most primitive, that the man seeking visions and insight must go apart from his fellows and live for a time in the wilderness."

I defy any reader in possession of even a modicum of curiosity to put down an essay that begins, "Every man contains within himself a ghost continent - a place circled as warily as Antarctica was circled two hundred years ago by Captain James Cook."

One essay in particular that has stuck with me is "How Flowers Changed the World," which details the ways in which human life thrived due to plants with angiosperm or encased seeds:

"Without the gift of flowers and the infinite diversity of their fruits, man and bird, if they had continued to exist at all, would be today unrecognizable. Archaeopteryx, the lizard-bird, might still be snapping at beetles on a sequoia limb; man might still be a nocturnal insectivore gnawing a roach in the dark."

Keep that in mind the next time you pass your neighborhood florist.

Eiseley's subjects roamed freely. He wrote about evolution and about the human and divine spirits, about the heavens above and leaves and humus squishing beneath our soles. Time and again, he discussed humankind's relationship with the rest of the natural world. He understood that we do not have dominion over the fish of the sea and the birds of the sky, but we live among them in an all-too-delicate ecosystem. He found a different and equally transcendent meaning in our existence.

About Einstein's famous dictum about God not playing dice with the universe, Eiseley wrote, "Whenever an infant is born, the dice, in the shape of genes and enzymes and the intangibles of chance environment, are being rolled again." He continued, "Each one of us is a statistical impossibility around which hover a million other lives that were never destined to be born" It's a healthy perspective, one that allows us - well, it allows me, at least - to find a newfound appreciation for this blip of energy that constitutes my short existence.

The Library of America edition comes at a great time. Perhaps, at long last, we can understand what Loren Eiseley spent his life attempting to tell us: "Perpetually, now, we search and bicker and disagree. The eternal form eludes us - the shape we conceive as ours. Perhaps the old road through the marsh should tell us. We are one of many appearances of the thing called Life; we are not its perfect image, for it has no image except Life, and life is multitudinous and emergent in the stream of time."

That's a welcome reminder, now more than ever. The decades since Eiseley's burial in the West Laurel Hill Cemetery have not diminished the profundity of his discoveries. "Certainly science has moved forward," he wrote. "But when science progresses, it often opens vaster mysteries to our gaze." These essays, lovingly collected here, accomplish the very same thing.

Andrew Ervin is the author of the novel Burning Down George Orwell's House. His nonfiction book Bit by Bit: How Video Games Transformed Our World will be published in May. He lives in Manayunk.