Preservationists have worked to save the building, but the ballet says its demolition is key to the company's success.

Pennsylvania Ballet, which long planned to renovate a white terracotta-clad building on its property at North Broad and Carlton Streets as part of its expansion a few blocks north of City Hall, now says it will demolish the building instead.

As the company lays the groundwork to complete the project and the campaign to pay for it, the troupe says it has determined that keeping the historic four-story building fronting Broad Street isn't feasible.

The ballet has applied for and received a permit to tear down the building at any point after April 29 — even though the company has not made public exact plans for what would replace the building.

A start date for demolition has not been set, said ballet executive director Shelly Power.

"We are highly confident that the new structure being planned for will add significantly to the cultural landscape of our North Broad Street neighborhood and the city of Philadelphia, specifically in our ability to expand our educational and community engagement programming," said Power. "We are greatly looking forward to an announcement of our plans for the property in the months ahead."

The ballet established its initial presence on North Broad several years ago, renovating an existing building — augmented by new construction — for studios and some satellite office space beyond its main administrative offices. That low, long building is set back from Broad Street.

The company had said it would renovate the terracotta building on Broad, just north of another terracotta-clad building, the Packard. Built to house a showroom, offices and storage for the U.S. Tire Co., the ballet's building is one of the last vestiges of Philadelphia's automobile row. It is listed as a contributing member of the Callowhill Industrial Historic District, a federal registry, though that designation does not give it protection from demolition. 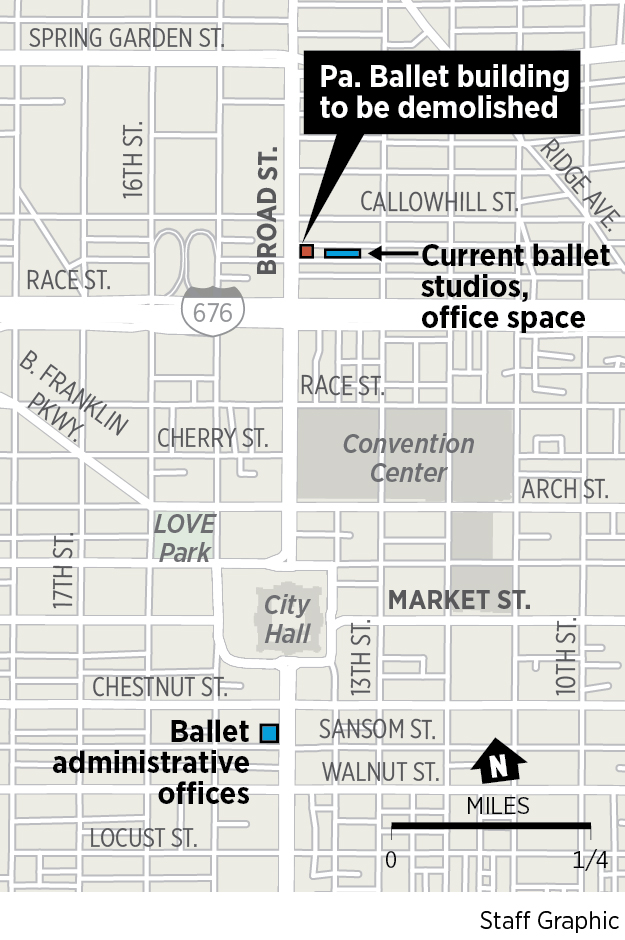 "We're certainly saddened by its impending loss," he said.

The alliance worked to persuade the ballet to alter its plans in meetings over several months. "We used persuasion as much as we could, but ultimately they didn't change their mind," he said.

Preservation Alliance officials said the ballet argued that the 1911 building was in need of substantial repairs; that new plans, which include a rehearsal space the same dimension as the performing space at the Academy of Music, precluded incorporating the 1911 building into the project; and that the ballet is financially dependent upon these particular plans for its home on North Broad Street coming to fruition.

"It's a tough one, because we really didn't want to go to war with one of the city's leading cultural organizations, especially since they are claiming this is their ticket to financial solvency, so it felt like we were in a tough spot," said Steinke.

The project would house studio and rehearsal space for its professional dancers, school, and community engagement programs.

The North Broad project would allow the company to consolidate its operations onto a single site. Currently the ballet's main administrative offices are in rented space on South Broad Street. Having the artistic and the administrative sides split "is highly unusual for a ballet company, and we are sincerely looking forward to having all parts of the organization in one home, so we can build our future together," said Power.

The white terracotta building was home to the U.S. Tire Co. until 1923, after which it was used by car dealerships, offices, and, from the late 1930s through the early 1950s, a drugstore with a soda fountain, according to research by Powers & Co., a preservation consulting firm whose president, Robert Powers, sits on the Preservation Alliance board.

"It's a wonderful building and it is a contributor to that historic district," said Robert Powers. "It is unfortunate that they will not be able to keep it."

The Broad Street façade and Carlton Street side (north) are faced in white glazed terracotta plus a few small stretches of other materials such as marble. Those two sides utilize relatively spare touches of classical ornamentation and feature large windows. The south and east sides of the building, which once abutted other buildings, have no architectural finishes but show exposed brick, stucco, and structural metal supports.

"We don't have a whole lot of terracotta buildings in the city, so losing another is a real loss," said Powers.

Pennsylvania Ballet several years ago demolished another old building on the the site, also fronting Broad Street. "The ballet leadership at the time said we're not going to save this building but will save the other," said Steinke, "and then the leadership changed, and now they are taking this one down, too. So it's very disappointing."

Powers, the Preservation Alliance board member, said that the ballet has engineering reports documenting problems with the building. "I'm not saying it's in good shape. There are issues, for sure. Is it beyond repair? No," he said. "It would just take money for someone to do it."

"This building is not able to fit into the growth that the ballet needs and how it would accommodate all of those programmatic needs," she said. "There was different artistic direction, it was a different time in 2012 and 13.

"I ran a school in Houston and took it from a small school to a robust school where 80 percent of the professional company came through the school where they were trained in the way the professional company wanted them trained," she said. "We've looked at it many different ways, and because of the narrowness of the site, that building couldn't fit into the footprint of what we need and what we are designing."