Lou Ann Best's life changed when her husband found a squirrel in a rainstorm. On a whim, he decided to teach the squirrel to water-ski. A local paper in Florida got wind of the story, and Twiggy the Water-Skiing Squirrel became a media sensation. "It all started as a joke. The news media got ahold of it, and it went crazy," Best said. "Here I am 37 years later."

Best's husband, Chuck, died in 1997 in a tragic boating accident while rescuing his stepfather, but his death has inspired Lou Ann to be a woman on a mission to promote water safety. Best and Twiggy will be at the Philadelphia Boat Show this weekend where Twiggy (not the original) will show off the skills that have taken Best all around the world and have been featured in movies, television, and in a Brad Paisley video. "She's in a college-level psychology textbook," Best says with pride.

What's your first step in training a squirrel?

It's like training your husband: You give him love, and you tell him the same thing over and over again until he gets it right. You can't do it with food because a squirrel is just going to hide it. It's all affection and repetition. I once had a rescue squirrel in my house, and she had some babies. I lost my sapphire ring, and I couldn't find it. She had taken it. She was going to take care of them babies really good.

How do you choose the perfect squirrel for water-skiing?

When we got the first Twiggy, she became so popular, and people thought we were squirrel experts. People started bringing squirrels to us. You pick and choose the ones with the best personality and go from there. For the show, they have to learn to count. I pick a kid, and they pick how many laps they want Twiggy to go, and 99 percent of the time she goes that many laps.

You say you're a woman on a mission because of your husband's death.

I have three segments of the show. In the first, I introduce my helper and Twiggy and me. I start out with Twiggy in my jacket. I say, "Some of the tabloids got ahold of Twiggy, and they told a bunch of lies. Now she thinks she's a star."

I put a life jacket on Twiggy. It's required for children for them to have it all the time, so I tell them they have to wear them because otherwise their parents will get in trouble.

My husband isn't here because he didn't have a life jacket handy. He went boating with his stepfather, and his stepfather fell in. We were river rats, but his stepfather couldn't swim. My husband forget to grab a life jacket when he went in to save him. Drowning people will fight you, so my husband isn't here anymore. I know he's up there in heaven saying, "Learn from my mistake." The Lord had a purpose for Twiggy. He put this idea of a water-skiing squirrel into my husband's head because he knew he would pass away and I could carry on and teach these kids about water safety.

In the middle part of the show, I do a skit where I encourage kids to take their swimming lessons and learn to float, because you can float forever. 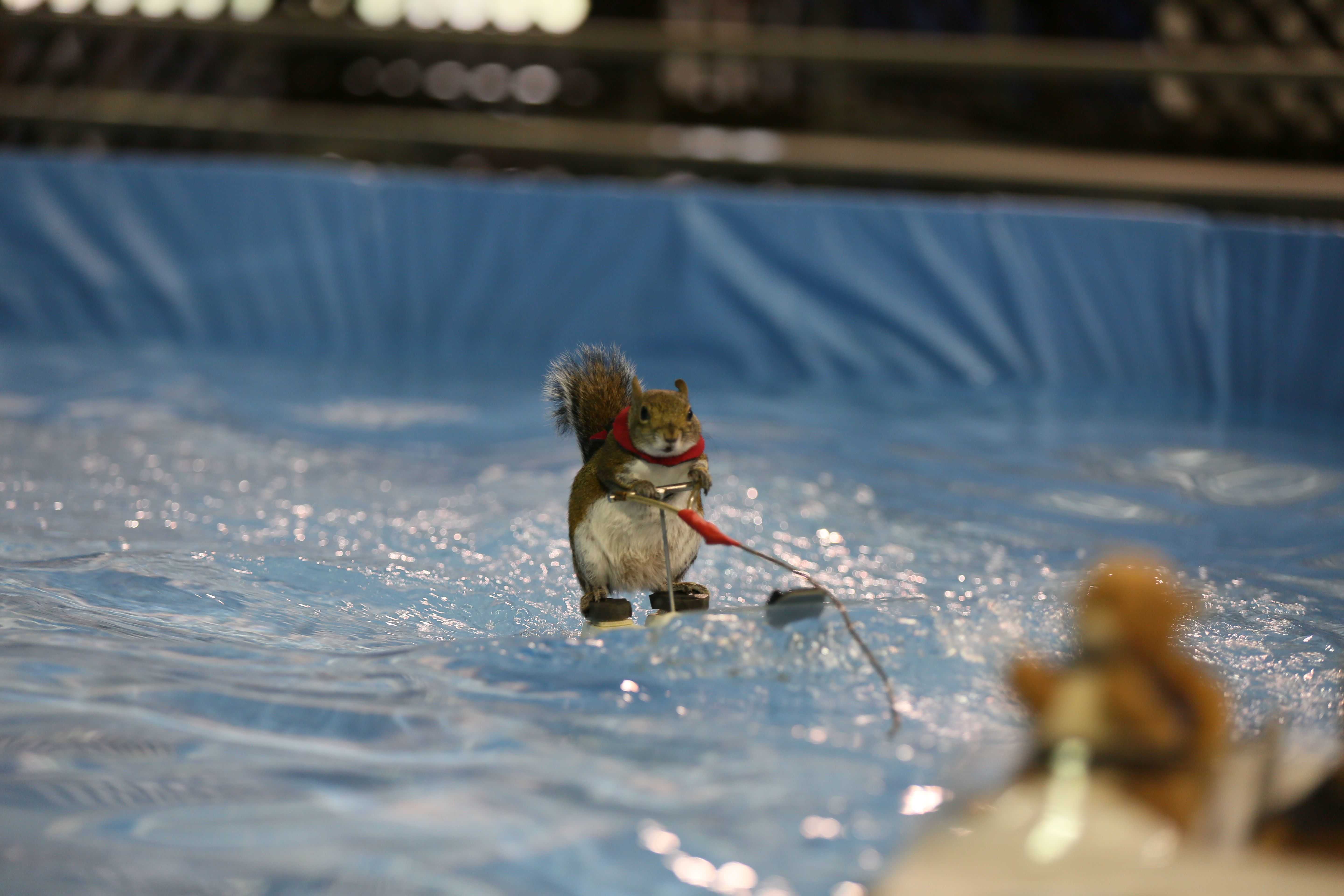 I did a show at a water park last year, and this kid ran up to me and said, "I learned to float just like Twiggy said!" That's the magic. I'm talking, but they hear Twiggy. I don't know whose life it will save, but I have to believe that someone's life will be because these kids learned to swim or float and wear their life jacket in the boat because of Twiggy.

My husband didn't die in vain. Someone will listen.

And you've taken your message all over the world. How are you received in other countries?

They treat us like kings and queens. In Germany, they polled all these different people to say what their favorite act was, and everyone said Twiggy. They all want me back, but I haven't been able to get Twiggy in the airplane, and I won't put her in baggage hold. In December, Dubai had the biggest boat races in the world, and they wanted Twiggy to come. And I'm like: "Send your plane! I'm not putting her in the baggage hold." I had to turn that down, and they were going to pay really well. After Northwest partnered with Delta, they won't let Twiggy fly anymore. I guess they see this little squirrel as a terrorist [laughs].

It's so rewarding to do something that makes people smile. There are more adults that come to my show by themselves than adults with kids. I can't help but get tickled by these people. In Kansas City, they booked my show next to this fisherman whose time was running over into mine. I had two sets of bleachers full; there are kids sitting on the floor all waiting for Twiggy. I get on the mic and say we're going to wait for this other guy to finish so we didn't drown him out. The whole crowd starts chatting "Twiggy! Twiggy! Shut up! We want to see the squirrel!" It's the power of the squirrel!