by Larry Blumenthal, Posted: May 4, 2012
Inquirer reporter Darran Simon is out covering the race live. Here are some updates from the field:

Carolyn Stellatella was running for Seth Grumet, a friend and father of three who is battling

She carried "Seth Head," a picture of 42 year-old Seth Grumet's face on a stick.

Grumet's sister donated her bone marrow, and he was recently released from the hospital.

She finished a marathon in Madrid in April with her "Seth Head" and one in Miami last year.

"Do you see this smile," she said. "He had that smile the whole time."

His kids called the disease "the monster under the floor boards."

A Marlboro, N.J. resident, he started a nonprofit called "Stomp the Monster"

"He's going to be healthy," she said. 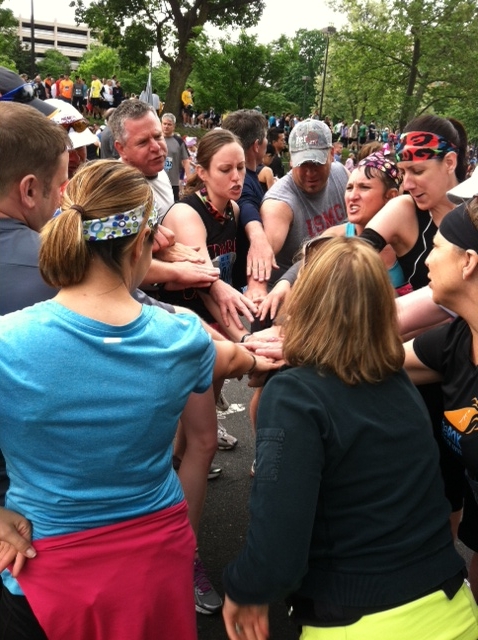 Aaron Oberst, a chiropractor and director of a boot camp, led one group in a 10-count stretch in a circle while they waited for 8:30.

They twisted their bodies in the asphalt. They closed in the circle and yelled: "Broad street run, let's have fun."

"This is early for us," said Mary Palmer, aka "nightmare."

Runners are milling around Broad and Einstein stretching on the asphalt, massaging cald muscles, a few with their arms tucked in shirts to stay warm.

Brianna Hearn went through her pre-race routine at home: a pep talk from her twin sister, Kaelin, a "pre stretch shake" to The Safety Dance, an 80s tune.

Her sister told her: "Forget the crowd. And I better not take too long."

Hearn, 25, of Philadelphia was on her second Broad Street Run.

Her friend and running partner, Bridget Golden, was on her 5th.

"I had a bachelorette party one year, so I didn't make it the next day," Golden said, standing on a packed car on the Broad street line.

Hearn's sister will have a sign. "She always comes up with something creative."

Science-based coverage sent nightly to your inbox — all facts, no panic.

We Recommend
I stocked my fridge and freezer for the coronavirus pandemic. Do I have to throw it all out if my power went out?
Marc Narducci
The people over 80 who survived the coronavirus | Coronavirus Newsletter
Ellie Silverman
Six percent of asymptomatic Philly inmates tested positive for COVID-19 as jails move to the ‘yellow’ phase
Jeremy Roebuck
Thousands of medical workers turn out to remember George Floyd and work for health equity
Jason Laughlin and Erin McCarthy
10,000 SEPTA Key cards soon expire. Despite coronavirus, you’ll still have to get a new one in person.
Patricia Madej
Philly region’s first day in yellow: Slow start for retail, but archdiocese promises in-person Masses Sunday
Sarah Gantz, Erin McCarthy and Juliana Feliciano Reyes
We Recommend
We Recommend
The Inquirer Coronavirus Newsletter

Science-based coverage sent nightly to your inbox — all facts, no panic.