Most favor certain health-promoting changes, such as correcting inherited diseases that would affect newborns or altering animals so that they can grow organs for people who need them. But crafting luminous pets and smarter babies would be taking the science too far, a majority of respondents said.

Newborns die of genetic diseases every day. Should their genes be modified to save them? Mosquitoes might kill a half-million people next year. What if scientists tweaked the bug to slow the spread of disease? And should guppies glow?

Those are among the hypotheticals posed to thousands of Americans in a pair of surveys conducted by the Pew Research Center. The first survey, published in July, asked about editing human DNA. A follow-up, published Thursday, focused on modifying other animals.

The surveys reveal that Americans have mixed feelings about the future of genetic engineering. Most favor certain health-promoting changes, such as correcting inherited diseases that would affect newborns or altering animals so that they could grow organs for people who need them. But crafting luminous pets and smarter babies would be taking the science too far, a majority of respondents said.

The surveys also reveal deep demographic divisions. In general, men support genetic engineering more than women. Black and Hispanic respondents show slightly lower levels of support relative to whites. And when it comes to editing humans, the religious are skeptics.

Most men — 55 percent — favor making more nutritious meat. Four in 10 said gene editing could be tested on human embryos if needed, and 24 percent were open to making children more intelligent.

Only a third of women want mega-meat. One in four would allow gene editing in humans if it required embryonic research. And a mere 13 percent are comfortable with crafting smarter babies.

When it comes to resurrecting extinct animals, such as the woolly mammoth, 41 percent of men are in favor. About 20 percent of women think that would be a good idea. Some scientists argue that reviving extinct species could increase our understanding of life and improve conservation efforts.

Arthur Caplan, founder of the Center for Bioethics at the University of Pennsylvania, who was not involved in the studies, believes the gender differences may be due in part to a male preference for "technology and engineering solutions" created by culture.

Only respondents who opposed a particular application of animal engineering were asked why they voted they way they did. Making aquarium fish glow was the least popular intervention. Among the 77 percent who opposed it, about half thought it was a waste of resources, 12 percent believed it to be interfering with nature, and 8 percent opposed it because it would be "messing with God's plan." Among those who balked at making modified meat, concerns about unintended consequences and the potential for negative long-term health effects topped the list. Those queasy about animal-to-human transplants cited animal suffering and the potential for human harm.

In every proposed animal intervention, a sizable proportion of respondents — from 18 percent to 31 percent — either did not know or would not say why they voted no. "Maybe they don't know how to express the idea," said Caplan.

Caplan uses (and coined) a concept called the "yuck factor" in bioethics research. It is meant to capture the ineffable sense that messing with life can just feel wrong.

"It's not a good argument," he said, "but it's something that needs to be addressed."

Caplan was "surprised" by the level of support for engineering insects. Overall, 70 percent of respondents said they were in favor of modifying mosquitoes to prevent the spread of disease. Only correcting genetic diseases in newborns polled higher, with 72 percent support.

Caplan, now a professor at New York University, has a hunch that many beliefs around whether genetic modification would be appropriate are not deeply ingrained. "It's one thing to say, 'I don't like engineering animals to get organs from them,'" he said. "It's a different thing to say your brother needs a liver [and] there aren't any. Would you take one from a pig?"

Respondents with "high science knowledge" — as measured by a general science quiz — were much more likely to support genetic engineering. Most support modifying animals to allow for organ transplants and more nutritious meat. The biggest discrepancy was seen in correcting serious genetic diseases that would affect newborns: Among subjects who scored highest on the science test, 86 percent were in favor. Among those who scored poorly, only 58 said that would be appropriate. 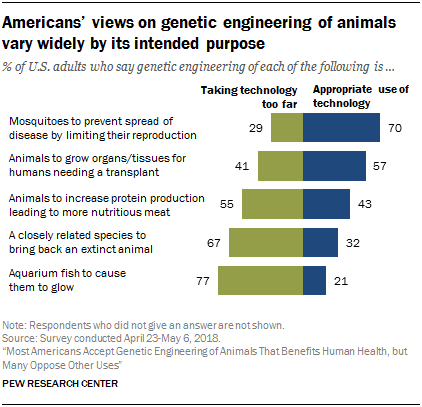 Genetically modified animals are not some distant possibility – they are already here.

In 2015, the U.S. Food and Drug Administration approved a modified Atlantic salmon that was tweaked to grow faster. Thanks to two gene fragments lifted from Pacific Chinook salmon and ocean pout, the transgenic AquAdvantage salmon can reach market size in a year and a half, as opposed to three years. This aquaculture product makes up a tiny fraction of the overall salmon market.

New advances in how scientists edit DNA are speeding up the development of more modified animals. Recombinetics, a Minnesota biotech company, and others are petitioning the government to rethink how it evaluates certain kinds of gene edits. Older techniques often required moving DNA from one type of organism to another. Now, more precise tools are allowing researchers to delete or retype specific letters within an animal's own genome. Recombinetics has produced hornless dairy cows this way.

"Monsanto in particular botched the rollout of GMOs," Caplan said. By resisting labels and emphasizing to farmers that they change their pesticide habits, consumers were left in the dark, he argued.

The fact that genetically engineered mosquitoes, which have not been approved, poll higher than GMO crops suggests to Caplan that perhaps the scientists proposing to modify bugs have already done a better job making their case.