Gun violence is a public health crisis the U.S. won't pay to research. 6 things to know

Like other recent mass shootings, the events in Parkland were quickly followed by a public outcry for increased gun control. On Feb. 19, Teens for Gun Reform hosted a "lie-in" in front of the White House to demand tougher gun laws. Others gathered in protest outside of the National Rifle Association headquarters on Feb. 16. Speaking at that event, Rep. Gerald Connolly, D-Va., argued for an assault weapons ban, universal background checks and closing gun show purchasing loopholes.

Florida legislators are currently drafting a bill that would increase the minimum age for purchasing an assault rifle to 21 and impose a three-day waiting period for purchases. President Trump has called for regulations on so-called bump stocks that convert semiautomatic weapons to fully automatic machine guns, as used in the 2017 shooting in Las Vegas. But will these laws prevent another mass shooting? Is there a better policy option?

Unfortunately, the research we need to answer these questions doesn't exist – and part of the problem is that the federal government largely doesn't support it. 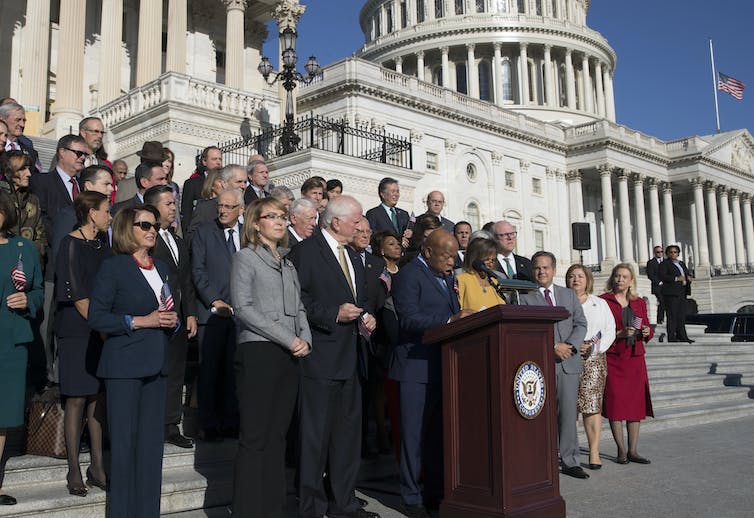 Members of Congress call for action on gun safety legislation on Oct. 4 after the mass shooting in Las Vegas.
AP Photo/J. Scott Applewhite

1. Why do we need research about guns?

Gun violence is a public health issue. It's a leading cause of premature death in the United States, killing more people each year than diseases like HIV, hypertension and viral hepatitis.

While violent crime has generally been on the decline since the mid-1990s, the latest reports from the FBI suggest crime rates may be starting to increase. Gun crime has been a persistent problem. According to the Centers for Disease Control and Prevention, 33,594 individuals were killed by firearms in 2014 alone. That's only about 200 less than the number of people killed in motor vehicle accidents. In 2015, roughly 85,000 people were injured by firearms, including nearly 10,000 children.

In order to prevent gun injuries and deaths, we need accurate information about how they occur and why. While police reports and FBI data can provide some detail, they don't include the thousands of cases that go unreported each year. Between 2006 and 2010, the Bureau of Justice Statistics estimated that more than a third of victims of crimes involving a firearm did not report the crime to police. The National Crime Victimization Survey, which collects victimization data from about 90,000 households each year, helps to fill in this gap. However, even this survey has its drawbacks. It doesn't collect data from youth younger than 12, it doesn't include murder, and it doesn't help us fully understand the offender's motivations and beliefs.

Social scientists like me need more research in order to get the level of detail we need about gun crime. There's just one major roadblock: The federal government won't fund it.

2. How much federal money is there?

In 1996, Congress passed the Dickey amendment. The legislation stated that "none of the funds made available for injury prevention and control at the Centers for Disease Control and Prevention may be used to advocate or promote gun control." While that wording did not ban CDC gun research outright, the legislation was accompanied by a $2.6 million budget cut. That amount happened to match the amount the CDC had spent on firearms research the previous year. The message was clear. From 1996 to 2013, CDC funding for gun research dropped by 96 percent.

3. What prompted these funding restrictions?

The Dickey amendment was passed after a CDC-funded study, led by physician and epidemiologist Arthur Kellerman, found that having a gun in the home increased homicide risk. After the results were published, the National Rifle Association pressured lawmakers, arguing that the CDC was inappropriately using its funds to advocate for gun control.

Opposition from the NRA is serious business for lawmakers. The NRA is one of the most powerful special interest lobbying organizations in the U.S. In 2014 alone, the NRA spent more than $3.3 million on lobbying activities – things like meeting with politicians, drafting model legislation and advertising.

Not surprisingly, the NRA has successfully blocked gun control legislation in the past, including the renewal of the 2004 assault weapons ban.

4. Can state or private sector dollars fill the gap?

Another potential option for research is to seek out funding from private agencies or philanthropists. But few of these opportunities are available.

According to Garen Wintemute, director of the Violence Prevention Research Program at the UC Davis Medical Center, fewer than five private organizations are willing to provide gun research funding.

Private funding is also somewhat risky for researchers. If a funder has a political leaning on gun-related issues, the researcher may be under pressure to produce the "right" results. Even just the implication that a researcher could have a conflict of interest can undermine a study's results and perceived legitimacy.

State funding may be another option. In 2016, California announced its intent to fund the University of California Firearm Violence Research Center. This is the first time a state has stepped forward to fund a research center focused on guns. California remains the only state to take this step.

The lack of funding has discouraged firearms research. Many researchers are employed within academia. In this publish-or-perish environment, researchers are under pressure to publish their work in academic journals and fund it through sources beyond their home institution. Without outside funding, their research often isn't possible. Leading firearms researcher Wintemute says "no more than a dozen active, experienced investigators in the United States have focused their careers primarily on firearm violence."

Lack of funding leaves some researchers, like myself, limited to small-scale studies with a low budget. The problem with studies like these is that they are often based on samples that are not nationally representative. That means we can't generalize from the findings or address all the questions we might have.

Without increased funding for gun research, it will be extremely difficult for researchers to provide accurate answers to the gun policy questions currently under debate. 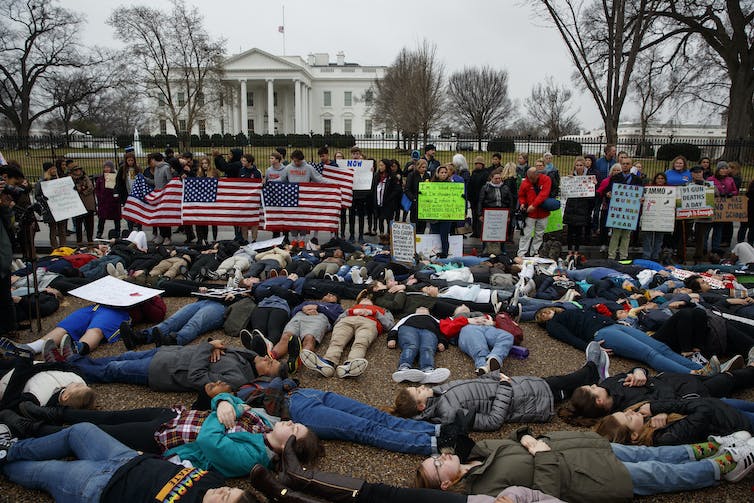 Demonstrators ‘lie-in’ during a protest in favor of gun control reform in front of the White House, on Feb. 19, 2018.
AP Photo/Evan Vucci

6. Does Parkland change the conversation?

A Washington Post-ABC News poll conducted after the Parkland shooting found that 77 percent of Americans felt that Congress was not doing enough to prevent mass shootings. Health and Human Services Secretary Alex Azar stated that he and those he represents will "be proactive on the research initiative" regarding guns. And some elected officials are saying it's time to get rid of the Dickey amendment. Public pressure and support from those in office may be enough to make more gun research possible.

Lacey Wallace is assistant professor of criminal justice, Pennsylvania State University This is an updated version of an article originally published on Oct. 18, 2017 in The Conversation.