5 questions: Why celebrities and politicians aren’t the best source of health information

Offit explores the current state of affairs for scientists, and why is it harming our nation, in his latest book, his eleventh, Bad Advice: Or Why Celebrities, Politicians and Activists Aren't Your Best Source of Health Information.

by Sandy Bauers, For the Inquirer
Published

Sitting off-camera, awaiting his appearance on the The Colbert Report, Paul Offit was nervous, even frightened.

Here he was, one of the country's foremost experts on vaccinations, a doctor who is head of the Vaccine Education Center at the Children's Hospital of Philadelphia. It should have been easy to explain what Stephen Colbert was exploring — why the anti-vaccine movement was threatening us all. But Offit also knew that, all too often, many in the U.S. public do not trust, or even understand, science or scientists.  Increasingly, they trust what celebrities, politicians and advocates say.

That particular interview went well. But many – for Offit and other scientists – do not.

Exasperated with what he is seeing, Offit explores the current state of affairs for scientists, and why is it harming our nation, in his latest book, his 11th, Bad Advice: Or Why Celebrities, Politicians and Activists Aren't Your Best Source of Health Information.

Offit, also the Maurice R. Hilleman Professor of Vaccinology and professor of pediatrics at the University of Pennsylvania's Perelman School of Medicine, recently talked with us about the book.

In your book, you say that not since the time of Galileo —  who was accused of heresy for claiming that the sun, and not the earth, was the center of the solar system — has science been in such jeopardy. What do you mean?

It's that the perception of science is in jeopardy. People have become cynical about scientific facts and are willing to just declare their own facts.  It reaches to the highest level of the current presidential administration. Donald Trump said during one of his debates that vaccines cause autism. He has denied climate change science. 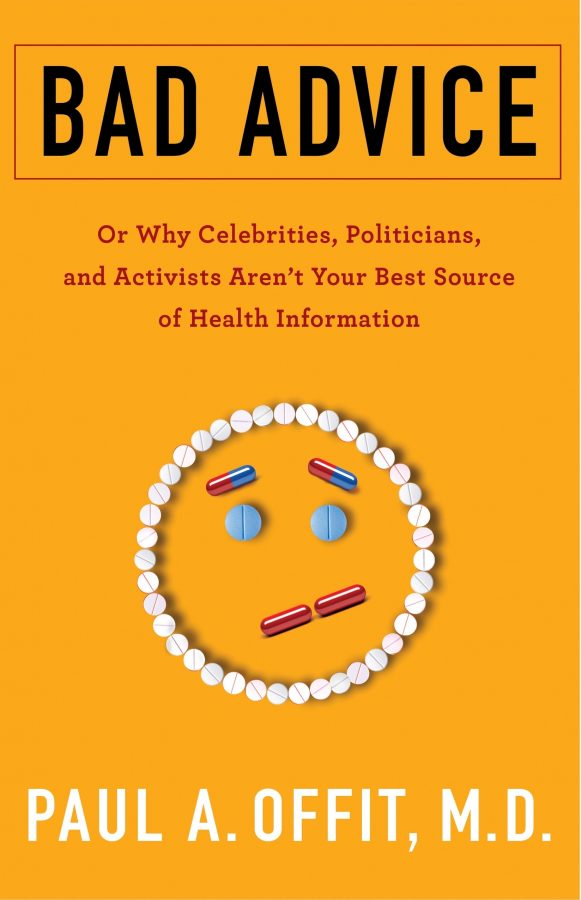 But people are willing to do it. They believe that their perception is just as valid as anyone else's, even if that other person has experience and expertise in a subject, and they don't.  In many ways, it is a devaluation of expertise. It's sort of populism run amok. We are all created equal; therefore, we are all equal in our ability to know something.  So a parent will go into a doctor's office and will believe they know just as much about vaccines as a doctor.

Why do you think we have come to believe celebrities, politicians and activists instead of scientists? What are they doing for us that scientists are not?

They're the only ones doing the talking. If you turn on the television and you watch commercials, it's celebrities who are selling things.  It works because we think we know them.  If you ask most people what they think Jim Carrey is like, they'll say he seems like a nice guy, smart, caring. Because that's what he was in one of his movies— The Majestic —and we confuse actors with their roles. We assume they are the roles they play. And they are not. They are just good at acting. They are good at making their point.

When David Tayloe was president of the American Academy of Pediatrics, he was on the television show Larry King Live with Jenny McCarthy, an actress and anti-vaccine activist. Here's Tayloe, a North Carolina pediatrician, a kind and gentle man, who is not used to this. Jenny McCarthy takes an aggressive position that vaccines cause autism. If you watch that show, you can't help but feel sorry for David. That's not his element. His element is meeting with scientists and doctors and coming to conclusions based on data. But that wasn't what this show was about. Jenny McCarthy is well-spoken, dramatic, vivid. This is her venue. What you would hope is that people would defer to the people who have the expertise. But that's not the way this show played out.

For me, the perfect example is a particular Oprah Winfrey show. Oprah invites Jenny, who proceeds to say how her son got autism within moments of getting a vaccine. She's telling that story in a heartfelt way, fighting back tears. I was asked to be on that show. My instinct was, sure, I can calm the waters. But that's not what the show was about. Oprah Winfrey is there to tell a story. That story has three roles — the hero, the victim, and the villain. Jenny is the hero. Her son is the victim. That leaves only one role for you, the scientist.  You're just some middle-aged guy telling two women – in front of a large audience that is mostly women — that they are wrong. It's not exactly a winning situation. I didn't go on the show.

Is it also that the celebrities’ message is simpler, and we want simple, not complexity and nuance?

Yes.  That's exactly right. What do scientists do? Scientists want to make things as clear as possible.  They want to eliminate ambiguity. So they do a lot of explaining, talking at length about why vaccines wouldn't cause autism. Why it's not possible. What the studies show.  The other side just says, "Vaccines cause autism."

>> READ MORE: Why are children with autism at higher risk for serious infections?

At some level, it is emotion versus science. And that's where the actor wins, where the celebrity or the politician wins.  They are all media-savvy. Scientists, that's not their training. In fact, it's the opposite of their training. A scientist is taught to be careful, to never go beyond the data you have.  An excellent scientific paper is full of caveats. The other thing is, you can never prove a negative. So a scientist would never say that.  When you hear scientists speak, they're not speaking in these definitive terms. And it comes off as weak. It comes off as if you're waffling.  Or worse, as if you're trying to cover something up.

What is a widely held belief today that is not supported by science? How has that harmed us?

That vaccines cause permanent harm.

In this country, 90 percent of children get all the vaccines they need according to the recommended schedule. So it's an easy scapegoat for someone to say, "My child was fine, got a vaccine, and a month later was diagnosed with something horrible."

Did the vaccine do it? It's a fair question. It's a reasonable question. I don't have a problem with parents who ask it. What I have a problem with is this: When the academic community steps forward and does the studies and shows that vaccines are safe, it's then, when a parent still rejects that, when they cross the line from skepticism to cynicism — it's all part of a conspiracy —  that I get frustrated. Because there's not a conspiracy.

Look at Andrew Wakefield, the celebrity British scientist who in 1998 first published a paper that was later retracted–– that the measles, mumps and rubella vaccine can cause autism. I spend an entire chapter on him in the book, trying to understand why he persists despite studies showing that he was wrong.  Among his supporters, he's seen as godlike. The implicit message of Wakefield's paper was, "don't vaccinate your child."  Thousands of parents didn't.  Hundreds of children were hospitalized with measles. Four died. You could argue that his paper killed children.

As a society, can we fix this? How?

Yes, I think we can. Scientists need to get in the game. The American Association for the Advancement of Science has 120,000 members. That's a great sales force. They need to sell people on what science is, how it works, and why it's so important in our lives. We have a country whose advances are built almost entirely on science and technology, but very few people understand science and technology, which allows these misconceptions to flourish. So we need to get out there, explain to people what we do, why it's important that we do it. I do think the scientist does have a role as being an activist for science, for the process of science.

Not that scientists are always right. Scientists get it wrong all the time. That's okay. We often take two steps forward, one step back.  That's just part of learning and discovery. That is why you can trust science.  Unfortunately, people tend to like the gurus who are immutable, who believe they have an absolute truth, who don't waver in any sense.

But the scientific process has certainly worked. It has waged a successful war against Mother Nature, who appears to be hell-bent on killing us with viruses, bacteria, and malaria-carrying mosquitoes. Science has enabled us to live 30 years longer than we used to because of advances in vaccines and antibiotics, because we have clean drinking water and so many other technological advances, like refrigeration and pasteurization. These advances have taken us out of the age of darkness into the age of enlightenment. By rejecting science, we run the risk of going back into a much darker time.

SB
Sandy Bauers, For the Inquirer