In vibrant N. Liberties, a brutal reminder that location can be an Achilles' heel

LARRY FREEDMAN moved to Northern Liberties in 1986, long before real-estate agents started affixing adjectives like "hip," "funky" and "up-and-coming" to the square-mile neighborhood.

In those days, muggings, open prostitution, burglaries and other crimes were just part of residents' daily endurances. When Freedman's girlfriend would leave - even if only to stroll to the corner store or visit a friend - Freedman would stand outside on the sidewalk, in constant contact with her, calling out his concern and his warning to would-be predators: "I CAN SEE YOU! YOU ALMOST THERE?"

"It was scary and dark and dangerous, and totally nuts back then," said Freedman, 60.

Northern Liberties has gotten safer since it metamorphosed into one of Philadelphia's most popular areas, but Wednesday's slaying of Sabina Rose O'Donnell just north of the neighborhood's Girard Avenue border was a sharp reminder that trendy, transitional areas often begin to expand into poor, crime-ridden ones.

After a night out with friends, O'Donnell had just biked home and was about to go inside when a monster snatched her, dragged her behind the house she shared with her stepfather on 4th Street near Thompson, stripped her naked and then beat, strangled and robbed her.

A dog-walker found the 21-year-old's body Wednesday morning in a vacant lot on Girard Avenue near Orianna. O'Donnell, an aspiring model and a waitress at the Piazza at Schmidts eatery P.Y.T., had recently moved here from California.

Yesterday, the medical examiner found that O'Donnell had been sexually assaulted and that the cause of death was strangulation, said Homicide Capt. James Clark.

He said that investigators were still trying to piece together a motive for the vicious crime.

"We're looking into all different avenues and we really haven't zeroed in on anything yet," he said.

"This crime not only is troubling, but it's an offense against the sensibilities of any decent community," said Matt Ruben, president of the Northern Liberties Neighbors Association.

For years, the neighborhood was like any other distressed, abandoned area of the city.

But artists, chased out of Old City by rising rents, found a welcoming home in Northern Liberties in the 1980s and '90s, with its cheap rents and abundant, available old factory spaces, Ruben said. Freedman was one of those artists; he had his heart set on a recording studio, while girlfriend Natalie Wieters wanted to open a pottery studio. Both still thrive in those endeavors. 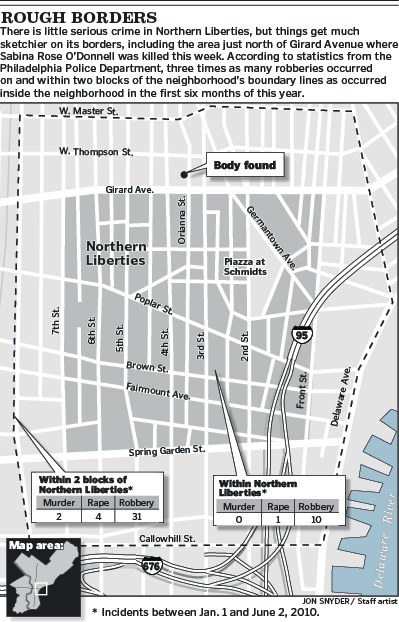 Redevelopment really exploded around 2000, with big projects like the Piazza at Schmidts and the Second Street corridor. Population has swelled about 50 percent since 2000, with about 6,000 residents now, Ruben said.

Despite its hipster reputation, Northern Liberties has not been immune to crime, with its meteoric redevelopment and its hardscrabble neighbors.

"Anytime you have rapid redevelopment next to poverty, you're going to have some level [of] property crime," Ruben said. "But this guy [who killed O'Donnell] has some real problems, and he could have come from anywhere."

Anyone looking for logic about O'Donnell's death shouldn't look at the changing face of Northern Liberties, one expert says.

Freedman agreed: "It's a horrible incident performed by an evil person, and I hope they catch him."