Changing Skyline: Cut off for decades, the 'East and West Berlins' of Philadelphia brace for changes

How long has the 41st Street Bridge between the Belmont and Parkside neighborhoods been out of commission?

So long that the bridge doesn't appear on Google Maps.

So long that the last time a car cruised between Belmont and Memorial Hall in Fairmount Park — a distance of roughly four blocks — there was a Clinton in the White House.

So long that a thick carpet of grass had time to spread across an entire lane of the bridge's concrete surface. 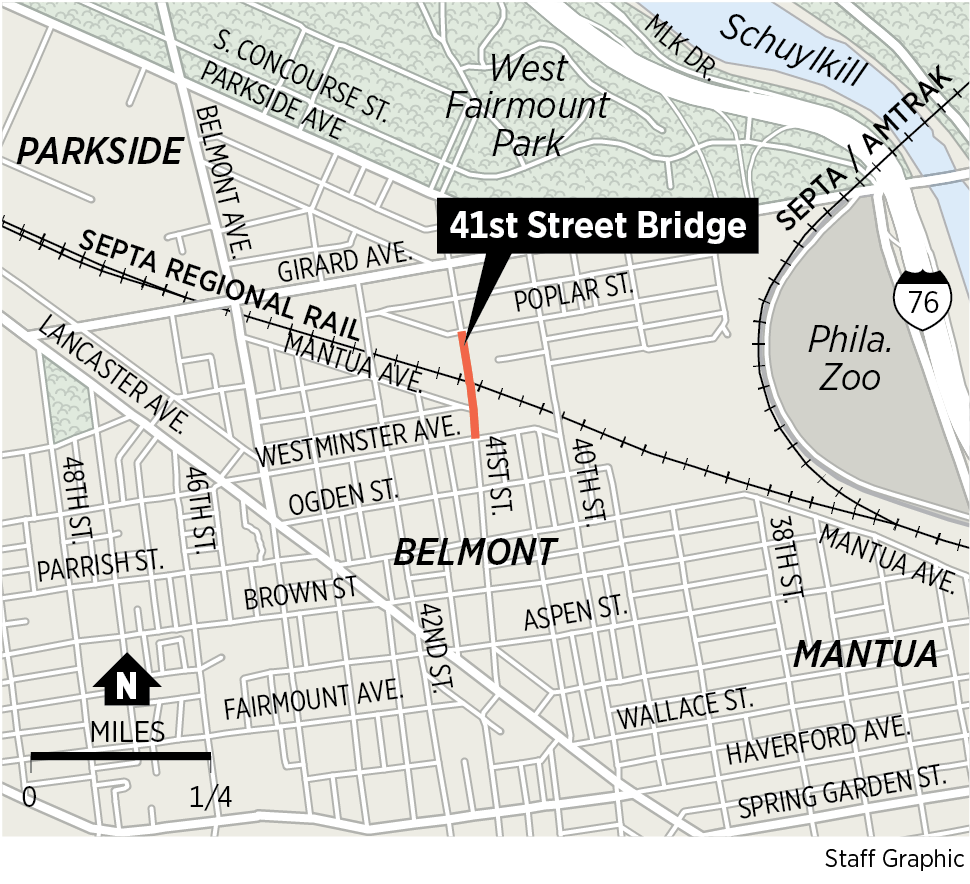 Or, to answer the question more precisely, it has been 22 years since the city shut down the 41st Street crossing over the SEPTA tracks, promising urgent structural repairs.

Instead, the bridge project languished, and the two struggling neighborhoods became the East and West Berlins of Philadelphia. Along with the 41st Street crossing, the bridges at 40th and 42nd Street were subsequently closed for improvements, often for years at a time, limiting neighborhood access to transit and jobs, and turning a simple visit to Fairmount Park into a major journey.

Now, their long isolation is almost over. Having restored the 40th and 42nd Street spans, the city just finished work this week on a new 41st Street bridge. With zero fanfare, workers moved aside the chain-link barriers on Wednesday and opened the $10.8 million crossing to traffic, effectively suturing Belmont and Parkside back together.

After a generation of extended detours, residents are naturally giddy at the prospect of once again being able to travel between Girard Avenue in Parkside and Lancaster Avenue in Belmont. Yet, because unification is likely to bring an influx of new development, the two neighborhoods also are bracing themselves for big changes. 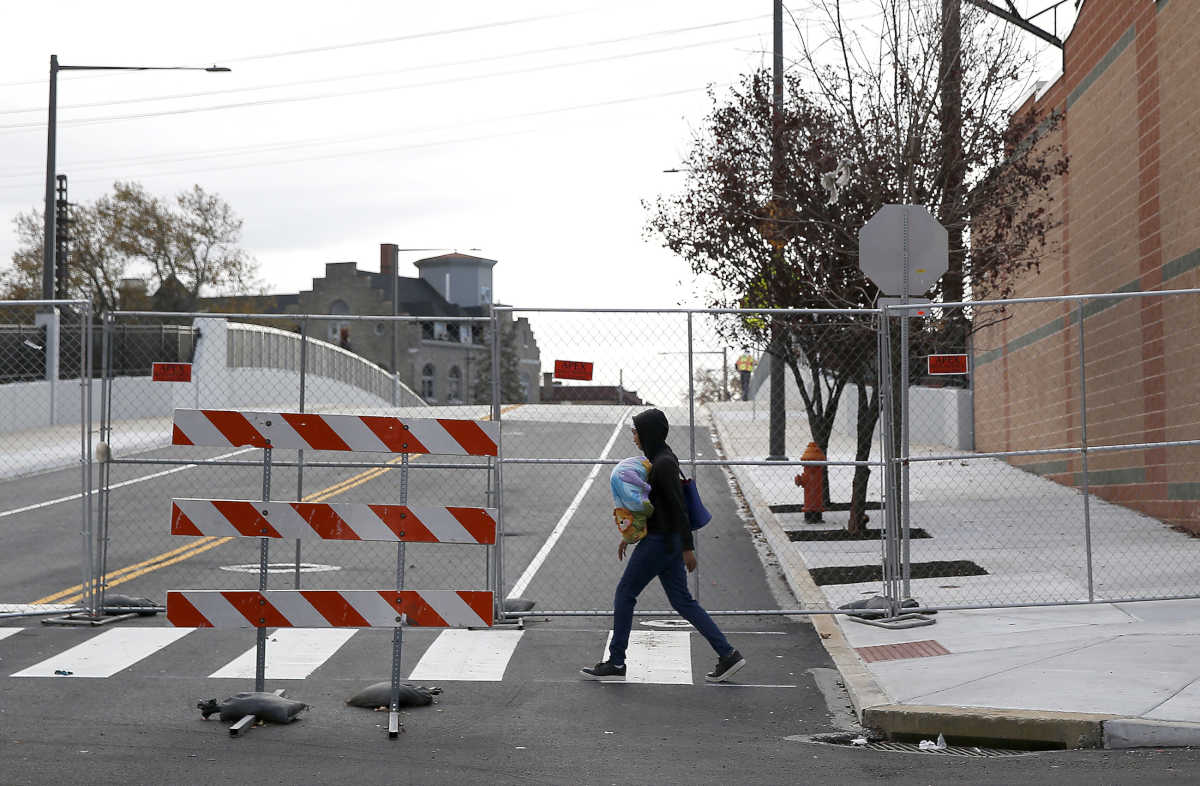 A view of the bridge from 41st and Poplar Streets. DAVID MAIALETTI / Staff Photographer

For years, the 41st Street Bridge project was the most notorious unfinished infrastructure project in the city,  a textbook case of how outside forces contribute to neighborhood decline. As residents gave up on Belmont and Parkside, abandoned houses fell in on themselves and big gaps opened up in blocks once lined with stately, wine-red Victorians. The bridge itself became a magnet for blight, attracting midnight dumpers who piled it high with construction debris. The two neighborhoods felt like a place that time forgot. Today, half the population in both communities lives below the poverty line.

"The fact that all this was allowed to happen is disgraceful. It wouldn't have been tolerated in any other part of the city," says Christopher Scott, who runs the newly established Centennial Parkside Community Development Corp.

So, how the new construction unfolds is crucial. Though isolation has taken its toll, it also spared Belmont and Parkside the dormification that has swept through the adjacent neighborhoods of Mantua and Powelton Village. With their rich, if battered, collection of large, finely detailed townhouses, Belmont and Parkside could easily return to their roots as family neighborhoods. Or they could become easy targets for demolition and cheap student housing. 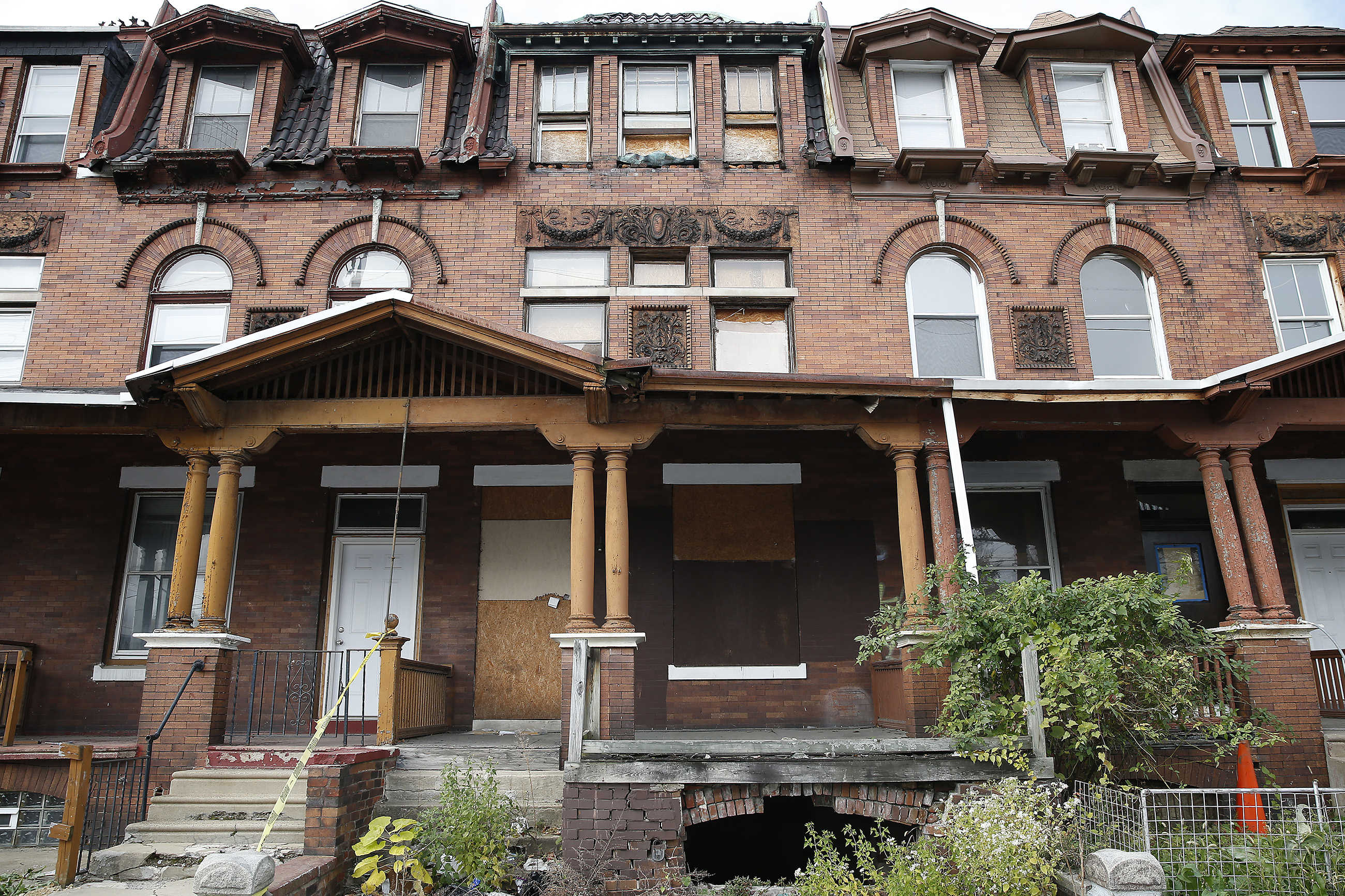 The Rev. Joe E. Nock, who grew up in Mantua and is now pastor at the Second Antioch Baptist Church in Belmont, welcomes new housing. The church is next to the bridge entrance, at 41st Street and Mantua Avenue, which gave it a front-row seat to the neighborhood's struggles.

A decade ago, in a moment of optimism, the church erected a lighted sign facing the bridge to attract attention. Needless to say, few saw it. All parishioners could do was hold annual cleanups to clear trash from the bridge. (It remained accessible to pedestrians.)

Nock says the church is now eager to be part of the rebuilding. When a 19th-century house next door to the church was recently put up for sale, Second Antioch rushed to buy it. But the church was outbid by a developer who later abandoned renovations when his money ran out. Elsewhere in the neighborhood, Nock has seen developers swoop in, make minimal repairs, and turn grand homes into boardinghouses.

Like Nock, Scott is eager to see the new construction. But that doesn't mean anything goes.

The challenge will be to encourage a balance that accommodates new market-rate houses without driving out residents. Scott says his group is taking lessons from both Mantua, where most of the new housing has been aimed at Drexel students, and Fishtown, which has attracted buyers with long-term commitments to the neighborhood.

The most obvious way for the neighborhoods to control their destiny is through zoning. To stem the destructive tide of student housing, Scott is pushing to down-zone some of the neighborhood from multi-family housing to single-family. That makes sense as long as there is still room for some density: Wider commercial streets, like Girard and Parkside Avenues, are perfect places for multi-story apartments with affordable units, especially because they have great transit connections to Center City. Belmont and Parkside were always moderately dense rowhouse neighborhoods and should remain so.

Belmont's advantage is that it is part of the West Philadelphia Promise Zone, which gives it a leg up in acquiring public funding for job training, infrastructure, and housing. Owen Franklin, who coordinates the initiatives, has been working with local groups to build the Mantua Greenway on the west bank of the Schuylkill, south of the zoo. Although it won't hug the riverbank the way Schuylkill Banks does, it would create a walkable, landscaped corridor linking Parkside and Belmont into the jobs hub around Drexel and Penn.

The new bridge itself is, in many ways, a big improvement over the old design. The Streets Department made sure there were wide sidewalks and mesh walls that allow views into the city so pedestrians wouldn't feel they were walking through a tunnel. But it is a stunning disappointment that there are no bicycle lanes, despite wide shoulders, particularly because there is talk of establishing an Indego bikeshare station nearby.

In the short term, both neighborhoods are making their own preparations for the coming changes. Nock's church finally succeeded in acquiring a house that it is converting into a computer lab that will offer Saturday coding classes. Parkside has just planted a row of trees along 41st Street to emphasize the connection to Fairmount Park, where the city is constructing a major destination playground designed by Studio Bryan Hanes. 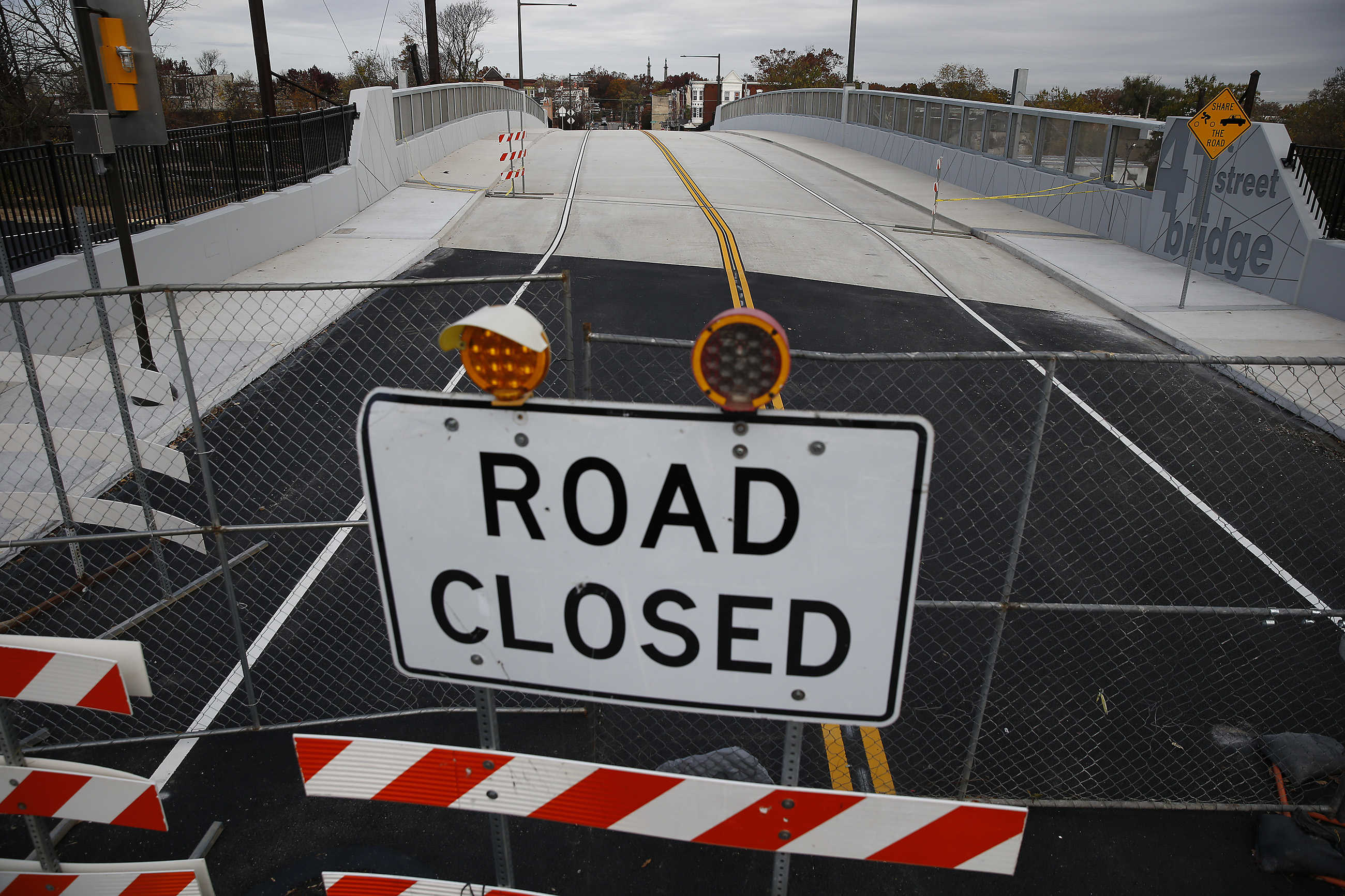 A view of the bridge from 41st Street and Mantua Avenue. DAVID MAIALETTI / Staff Photographer

When Nock was growing up in Mantua, he says, the 41st Street Bridge was the best place in the neighborhood to watch the fireworks. Today, Center City's growing skyline glitters Oz-like in the distance. You can see the tapered columns of the Smith Memorial Arch poking above the Fairmount Park treetops. Soon, residents will even be able to travel to both places with ease.

We Recommend
To do this week: Is it time to stop hibernating yet?
Staff Reports
The best things to do this weekend: Drive-in at Navy Yard, Women's history month, First Sunday, Holi, and more.
Jillian Wilson, for The Inquirer
These are your rights if police knock on your door
Nick Vadala
With Live! Casino open, it’s time to reconsider how we divvy up Philadelphia’s gambling payout
Inga Saffron
The website Findashot.org may be a better way to get a COVID-19 vaccine appointment
Harold Brubaker
Dear Abby | Man’s bisexual past gnaws at woman’s sense of trust
Dear Abby
Inquirer Morning Newsletter