News Literacy Project: Teaching students to tell the true from the fake

At Norwood-Fontbonne Academy in Chestnut Hill, 16 eighth-grade students have just begun a rousing hour of learning to be news-literate, independent-minded critical thinkers. Working at their laptops, some ponder a question ("What is newsworthy?"); others answer a directive ("Briefly explain your rankings").

Web posts from sources of global news await reaction. A post from the International Rescue Committee shows an emaciated baby in a hospital bed. A picture of drooping, deformed daisies bears the headline "Fukushima Nuclear Flowers." From Time.com, the headline is "Trump's Budget Would Kill a Program That Feeds 2.4 Million Senior Citizens."

Eighty-five miles north, a class of 30 high school students at Essex County Vocational Technical School in Newark, N.J., sits rapt as, on a big screen in front of the classroom, New York Times homeland security reporter Ron Nixon talks about bias. “I have opinions, just like everybody else … but it doesn’t get in the way of my job,” he tells the class.

Sitting at their computers, the Newark students — along with about 150 unseen learners at schools in Wisconsin, California, Florida, Washington state, and Texas — fire off questions and comments, building a conversation in the comments quadrant at the bottom right of their screens. A student asks, "How does the upcoming age of alt-facts affect you as a reporter?"

These lively give-and-takes at the local independent Catholic school and the New Jersey public high school come courtesy of the News Literacy Project and its checkology virtual classroom, funded under a grant from the John S. and James L. Knight Foundation.

Essex County Vo-Tech was an early adopter, and as the platform expands nationwide, classrooms in Philadelphia schools such as Norwood-Fontbonne are joining the conversation.

Checkology aims to bring students together with the best in the truth-gathering business. The idea is to teach students how the news is reported, what the rules and standards are, and how to be their own fact-checkers and BS-detectors. 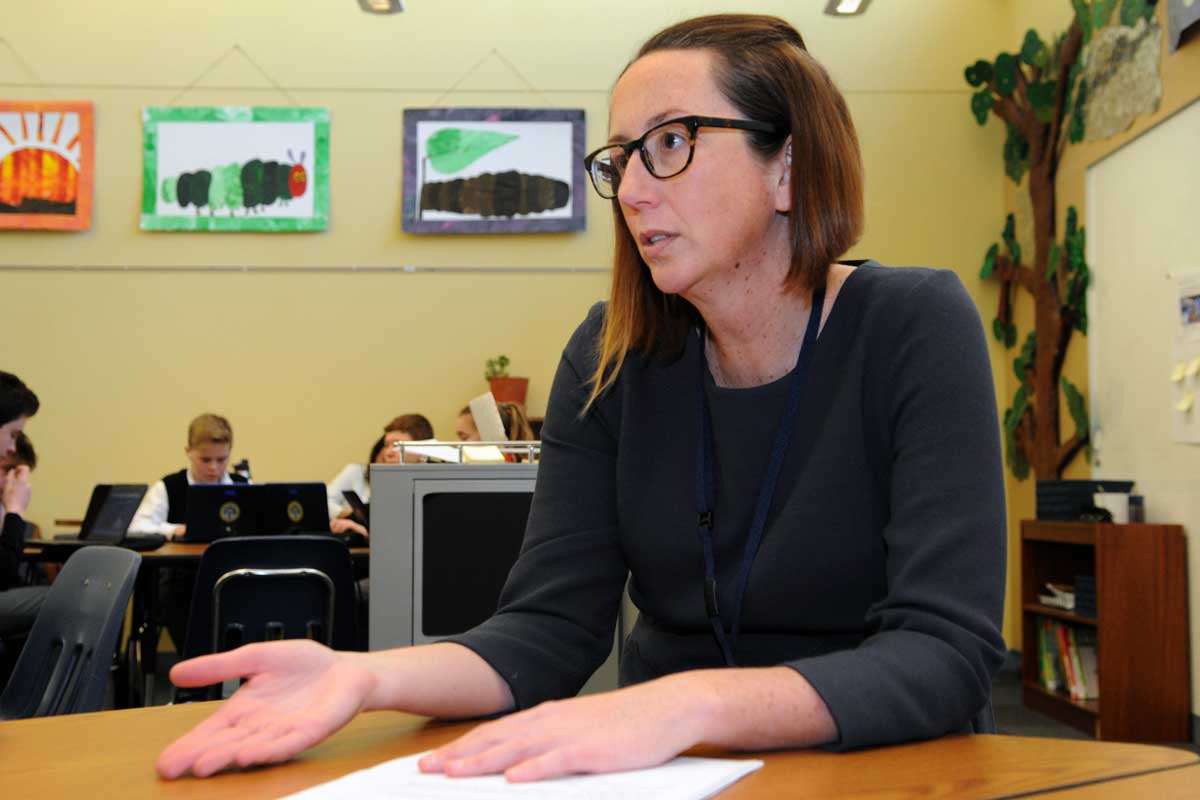 At Norwood-Fontbonne, librarian and media instruction specialist Shannon Craige learned of the News Literacy Project on Twitter. She brought in Lindsey Sachs, a technology integration specialist, and they decided to apply for the pilot.

"We want our students to be self-directed persons who analyze and reflect, to be good citizens who play their part in this nation by being attentive and focused," says Sister Mary Helen Beirne, head of school.

Their participation in checkology comes as grade schools, high schools, colleges, and universities everywhere are bolstering their media-literacy courses. But the need for a media-savvy citizenry isn't new. "We were talking about the dangers of misinformation and an uninformed electorate long before anyone coined the term fake news," says Alan C. Miller, the Los Angeles Times journalist who launched the News Literacy Project in 2008.

The idea came to him three years earlier, when he was working in the paper's Washington bureau and visited his daughter's sixth-grade class to discuss what he did and why it mattered. "I left the school that day," he says, "thinking that if a lot of journalists brought their experience to bear, it could really be meaningful." He got a Knight grant to seed the project, and it spread from there.

The classroom conversation at Essex County Vo-Tech suggests that the digital-visiting-journalist approach helps individual students of the 21st century engage personally with Thomas Jefferson's notion that "our liberty depends on the freedom of the press." Eagerly inputting questions and comments, and answering poll questions, the Newark students discuss the crucial protections of the First Amendment along with fact-finding and ethics in reporting.

The New York Times' Nixon weighs in on the curious student's question about alt-facts. "You can say, 'I don't believe this or that,' he says. "This is America." But what you're entitled to is your own opinion, he tells the students.  ­"Not your own facts."

As the students input their questions or comments, teacher Lynn M. Love-Kelly walks the aisles, saying, "Think before you type."

Discussions break out among students all over the country. Should President Trump be tweeting so much? (Kiara Wilson: "I feel like he shouldn't be saying any of his plans out loud; it's unprofessional.") Will a wall with Mexico accomplish anything? (Most are skeptical. Some are hopeful.)  They are asked what they'd like to report on if they were journalists.

Afterward, a heartening sight: a group of students, all 16 years old, discussing fact-checking, sources, the Constitution.

Abby Lawrence says she enjoyed Nixon's presentation and guidance: "It's good to get advice and experience from the people who have actually done the work."

"I liked seeing how he did his job," agrees Gabriela De Jesus. "And how he tries to avoid bias."

"And there's so many people who believe it," adds De Jesus. "Rumors are there to create fear. That's what makes it so serious to have credible sources."

The students are so eloquent that Love-Kelly is moved to say, "It almost made me cry."

"I feel we've gone from being a voice in the wilderness to an answer to a prayer for many educators," says Miller, "to equip students with the ability to know what to believe. … It's really a survival skill in a digital age."