In Philadelphia, where 307 homicides were reported last year, arrests were made in just 55 percent of slayings from 2007 through 2016, and more homicides went unsolved in the city and nationwide during the decade when the victim was black, a new study has found.

In Philadelphia, where 307 homicides were reported last year, arrests were made in just 55 percent of slayings from 2007 through 2016, and in the city and nationwide during that decade, more homicides went unsolved when the victim was black, a study has found.

According to the data, published in the Washington Post this week, the nation's 55 largest cities reported 54,990 homicides during that decade, half of which resulted in no arrests. When the victim was white, arrests were made in 63 percent of those slayings, compared with 47 percent when the victim was black, the study reported. Philadelphia reported 3,037 homicides and the vast majority of victims — 2,359 — were African American. Among the other victims, 373 were Hispanic, 256 white, and 48 Asian. 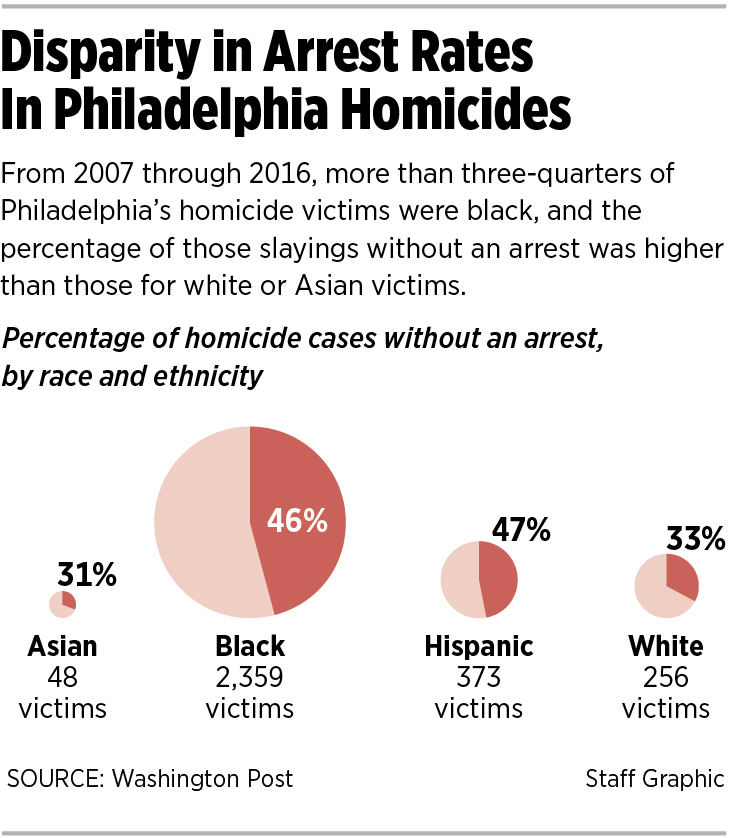 The study cited African American distrust of police and fear of retaliation from killers as barriers to more arrests, and some black people interviewed by the Post speculated that the problem was rooted in police placing a lower priority on solving homicides of black people.

David Fisher, a retired Philadelphia police detective, attributed the lower arrest rate for black victims to "the silence of the community."

Fisher, president of the National Black Police Association — Greater Philadelphia Chapter, has been personally affected by the statistics. His nephew DeAndre Bing, 17, was fatally shot in the chest near 20th Street and Susquehanna Avenue on Jan. 23, 2015.

Bing — who would have graduated that spring from Eastern University Academy Charter School in East Falls — had just left a friend's home when he was gunned down. More than three years later, no motive for the killing has been established and no one has been arrested.

Fisher said the absence of justice in killings like his nephew's is common in Philadelphia — especially in black neighborhoods — partly because people are reluctant to help detectives solve crimes.

"They don't have a problem, in a lot of black neighborhoods, knowing who did it," he said. "No one wants to talk to the police, because they don't really want to get involved. But everything is not CSI. At some point, you need people to say, 'I saw it,' and come to court and say, 'I saw it.' "

Aleida Garcia, whose son, Alejandro Rojas-Garcia, 34, was murdered outside a Hunting Park bar on Jan. 24, 2015, agreed that the "no-snitch" mindset and mistrust of police help to drive down the arrest rate. The result is that killers walk free, and sometimes remain in the communities where they have killed, she said.

"It's a horrible thing that you lose someone to violence, and it's compounded by the fact that you might be standing next to someone in a supermarket who is guilty of the murder," said Garcia, who co-founded the National Homicide Justice Alliance. "It's also a feeling that your loved one died and that person who killed them is out there having a wonderful life. It makes you feel, like, what was my child's life worth? It's a nightmare."

At least she knows where her son's killer is. In May, Leonardo Rivera was tried in Philadelphia Common Pleas Court, and was convicted and sentenced to life in prison plus seven to 10 years, said Garcia, noting that the case was solved after police released surveillance video of the gunman.

Ben Waxman, spokesperson for District Attorney Larry Krasner, said the study exposes a portion of the criminal justice system that is broken.

"I think we have a lot of people in this city in law enforcement who are working extremely hard with limited resources to solve these cases," Waxman said. "But they don't have the resources because we are spending time prosecuting people smoking marijuana."

Waxman noted that Krasner announced in February that his office would no longer prosecute marijuana-possession cases.

A spokesperson for the Philadelphia Police Department declined to comment about the study's findings.

Mensah M. Dean
I report on law breakers, those they impact, and how the criminal justice system interacts with both. I also write about civil litigation and trials.