Baltimore's soaring homicide rate: 'This is a killing field'

by Peter Hermann and Theresa Vargas, Washington Post, Posted: May 15, 2017

BALTIMORE — No one saw the baby.

She sat in a gold-hued car with tinted black windows as her 26-year-old father lay on the ground outside, dying.

All eyes were on him, another fallen body in a city increasingly defined by them.

In portions of Baltimore, the strobe of police cars is as much a part of the landscape as boarded-up homes. But the pace of the killings this year has been stunning as the city struggles to recover from rioting in 2015. As of Friday, 124 people have been murdered, including five on a recent day, making the Baltimore's homicide rate one of the highest in the country. It is more than triple Washington's rate and higher than the homicide rates in New Orleans and Chicago, two places that have become national symbols of gun violence.

Each murder in Baltimore leaves a mark on those who witness it and those who investigate it. But few have been as haunting as the scene that played out on March 27 in front of a West Baltimore carryout that, in contrast to its cheerful name, Rainbow, has metal bars over its windows.

An area business owner drove by moments after the bullets flew. He slowed his car enough to notice the fade of the wounded man's haircut and that he wore expensive looking jeans. Strangers stared at the victim, Ernest Solomon, from the other side of the police tape, some shouting supportive words.

Officers, too, focused on Solomon, walking past his car, which was surrounded by shell casings.

More than an hour had passed since he'd been shot and taken to the hospital and still no one had opened the locked car. It was a key piece of evidence, and officers knew the less they touched it the better. Following protocol, they planned to tow it to a police lot, and then take it to a crime lab where a technician skilled in finding fingerprints would await a search warrant signed by a judge. It could take hours, or even a day.

Then came a faint cry.

"Did you hear that?" homicide detective Lee Brandt asked another detective and then yelled for an officer to bring keys that had been retrieved earlier from Solomon's pockets.

There, inside the car, he found Solomon's 10-month-old daughter strapped in her car seat, wearing a pink and white onesie under a black sweatsuit. Brandt pulled her out and held her up, as other officers looked on, mouths agape. The moment was captured by a Baltimore Sun photographer in a picture that quickly spread across social media and that Brandt keeps close as a reminder.

'Don't give up on Baltimore'

Ernest Solomon was the 71st person killed in the city.

Beyond the other numbers were two boxers, a pregnant woman, and the son of a slain police officer who was shot to death a decade after his father died the same way.

After officer Troy Chesley was killed while off duty in 2007, Sheila Dixon, then Baltimore's mayor-designate, expressed hope that the death wouldn't embitter his sons and declared, "We have got to stop these senseless killings."

After his son Trayvon Chesley, 22, was shot in the head in April, a police major tweeted almost an echo: "Senseless killings have to stop in OUR city!"

"People don't realize it's worse than Chicago," said Otis Rolley, former Baltimore planning director and a one-time mayoral candidate. His 23-year-old nephew, Andrew Zachary, a former Marine, was the 15th person killed in the city this year. "This man was trained by the U.S. government and had the skills and ability to survive in a combat situation overseas but was unable to navigate the streets of Baltimore. And that is a scary, scary thing."

Baltimore has long struggled with violence and a strained relationship between its police force and many African-American residents. It went a decade with 300 or more killings each year in the 1990s before the numbers finally began falling in 2000.

But the homicide rate hit a high in 2015, the same year Freddie Gray died in police custody and the city erupted in civil unrest. That year, Baltimore had 344 homicides, the deadliest per capita in the city's history. The next year, marked its second highest, with 318 deaths.

"Don't give up on Baltimore," Mayor Catherine Pugh told officers gathered for a roll call in the Southern District police station last week.

Lt. Fontaine Smallwood also encourages his officers before he sends them onto the city's streets. He urges them to play with children and talk with residents. He said he tells them there will be more violence, but also that "it will eventually get better."

Even before Smallwood was called to the scene of Solomon's murder, he knew that corner well. Not only is it in eyesight of where the riots first erupted, but Smallwood grew up in a rowhouse two miles south. His house is no longer there. Instead, the vacant lot is now a tangle of shoulder-high weeds.

Smallwood was 30 when he joined the police force a decade ago, and during the riots, he tried to hold back looters and watched a senior center burn. He said he has no answers when people ask him why the violence has soared since then.

"I think maybe it was a boiling point," he said.

On the day of Solomon's murder, Smallwood's job was to coordinate the response.

Brandt, who joined the force nine years ago after working as a lineman for Verizon, was looking for surveillance video that captured the incident.

His job often involves pulling video from crime scenes, including homicides, but he tries to avoid viewing them. This time, he watched. In the video, he said, Solomon and his killer can be seen wrestling, possibly over a gun.

Witnesses say Solomon was selling shoes out of his car and was targeted by someone who wanted to rob him. Police confirmed that he was robbed and also noted that he did not have a criminal record. Solomon's family declined to be interviewed.

Less than two weeks before his death, Solomon wrote on his Facebook page: "Can't really complain about anything as long as breathing and in good health #blessed."

A few days later, he spoke about his hopes for his little girl: "I swear I want so much more for daughter I don't want her to be nothing like these joints out here at all."

In a funeral program for Solomon, he is pictured lying next to his daughter, both sucking in their bottom lips. In another frame, he holds her hand as she stands. A biography describes her as "the joy of his life," and in a poem, he's described as her "protector."

"Rest easy my Daddy," it reads. "I will always love you with all my heart." 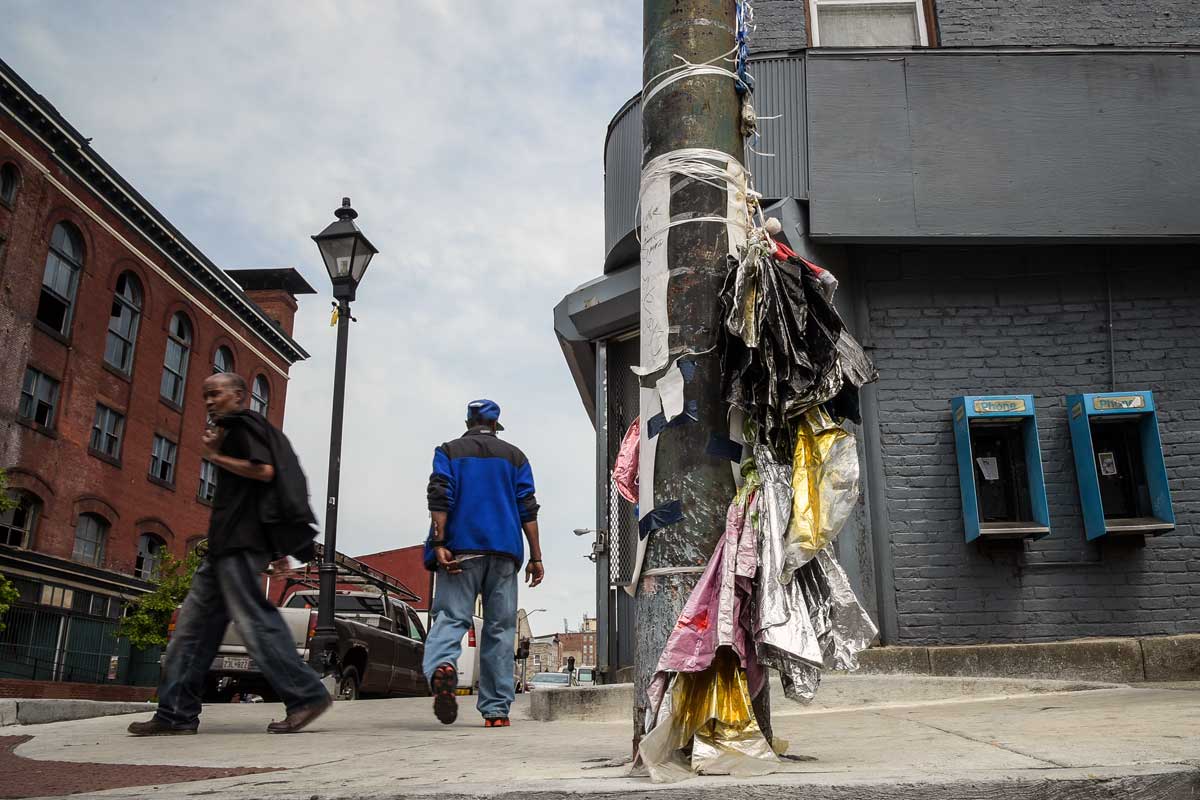 'People are living in fear'

Wylie Funeral Home gives out wristbands bearing the name of the person being mourned, and some people have enough to stretch from wrist to elbow.

Because of privacy concerns, Brandon Wylie wouldn't say which deaths his funeral home handled this year, but obituary listings show that it oversaw arrangements for several of the city's homicide victims, including Solomon.

Wylie, who grew up above his father's West Baltimore funeral home, said he'd be happy if there were no murder victims to bury. Funeral homes often take a financial loss with killings because they are dealing with unprepared families, he said. He's also grown tired of seeing some of the same young faces at one service after another.

"It's desensitized them in a way," Wylie said.

He recently started a mental health program, called Above it All, that serves young people from ages 5 to 18.

"People are living in fear," Wylie said. Growing up, he used to walk to the corner without worry, knowing others were looking out for him. "Now, a kid might not have that luxury."

After Freddie Gray's death, theories circulated about how it contributed to the surge in killings that year. Some people believed that the use and selling of drugs from looted pharmacies contributed to the violence or that old turf battles had been rekindled amid the chaos. But now two years later, if there is a Freddie Gray-effect, residents say it may lie in a heightened distrust of police that leads people to avoid reporting crimes and to seek their own justice.

The business owner who saw Solomon after he was shot also believes police have changed how they behave for fear of getting in trouble. Six officers were charged in Freddie Gray's death, though none were convicted. The police department — the subject of a scathing Justice Department report that found it had engaged in years of blatant racial discrimination on Baltimore's streets — is being overhauled under a consent decree with the federal government.

"Since the Freddie Gray situation, even if you call the police and give a description, they can't touch" the criminals, the business owner said. "They know they're untouchable. That's the key."

He asked not to be identified by name, saying his life had already been threatened.

"This is a killing field," he said.

When Brandt pulled the baby from the car that afternoon, the business owner said everyone watching was shocked. Solomon had been shot at 1:16 p.m. and pronounced dead 40 minutes later. The baby was found at 2:30, somehow unharmed.

In the photo taken that day, Smallwood can be seen standing behind Brandt, his head tilted and mouth open in disbelief.

"It really hurts to know that our children are getting caught up in the crossfire of some of this violence," Smallwood said. "I was shocked that the child was unharmed throughout that whole ordeal. It was almost as if an angel protected this child."

A copy of the photo is now displayed in Smallwood's office at the Western District police station, tacked to a cork board next to a readout of grim crime stats.

Brandt keeps the image on his phone.

"We have seen enough senseless killings," he said. "To have one person live makes a difference. Who knows what she will grow up to become, but we gave her an opportunity."

Jennifer Jenkins contributed to this report.