Humpbacks are washing up on the Atlantic Coast, but why?

Humpback whales — no longer considered an endangered species — have recovered from near extinction over the last 40 years, with a current population that numbers as many as 80,000 worldwide.

But scientists are baffled about certain humpback behaviors over the last 16 months around the globe, including a spike in dead humpbacks washing up on beaches from Maine to North Carolina.

Along the Jersey Shore, four have been found during that period. The most strandings (eight) were reported in Virginia, officials said.

The findings in the Atlantic Ocean could be mirroring what is happening elsewhere. In the Pacific, as many as six humpback carcasses have washed ashore on the Hawaiian Islands since November — double the usual number during an average season, according to environmental officials who are working to determine whether radiation from the Fukushima nuclear accident or other factors could be causing the deaths.

Higher-than-usual numbers of marine mammal wash-ups also have been reported during the past year along coasts in Alaska, California, Washington, and Oregon, officials said.

Elsewhere, the massive humpbacks, which usually travel alone or in pairs, are congregating in  "supergroups" off the coast of South Africa. Researchers speculate feeding frenzies are linked to increased species populations in a healthy ocean commensurate with larger amounts of available prey.

"There is something a little mysterious about it ... it's the how it's happening, it's the why it's happening" that has him baffled, said whale expert Ken Findley, who is working with South Africa's Department of Environmental Affairs to study recent observations of the humpbacks there.

Humpback whales migrate as far as 16,000 miles a year, swimming between polar climates where they feed, and tropical and subtropical locales, where they breed. 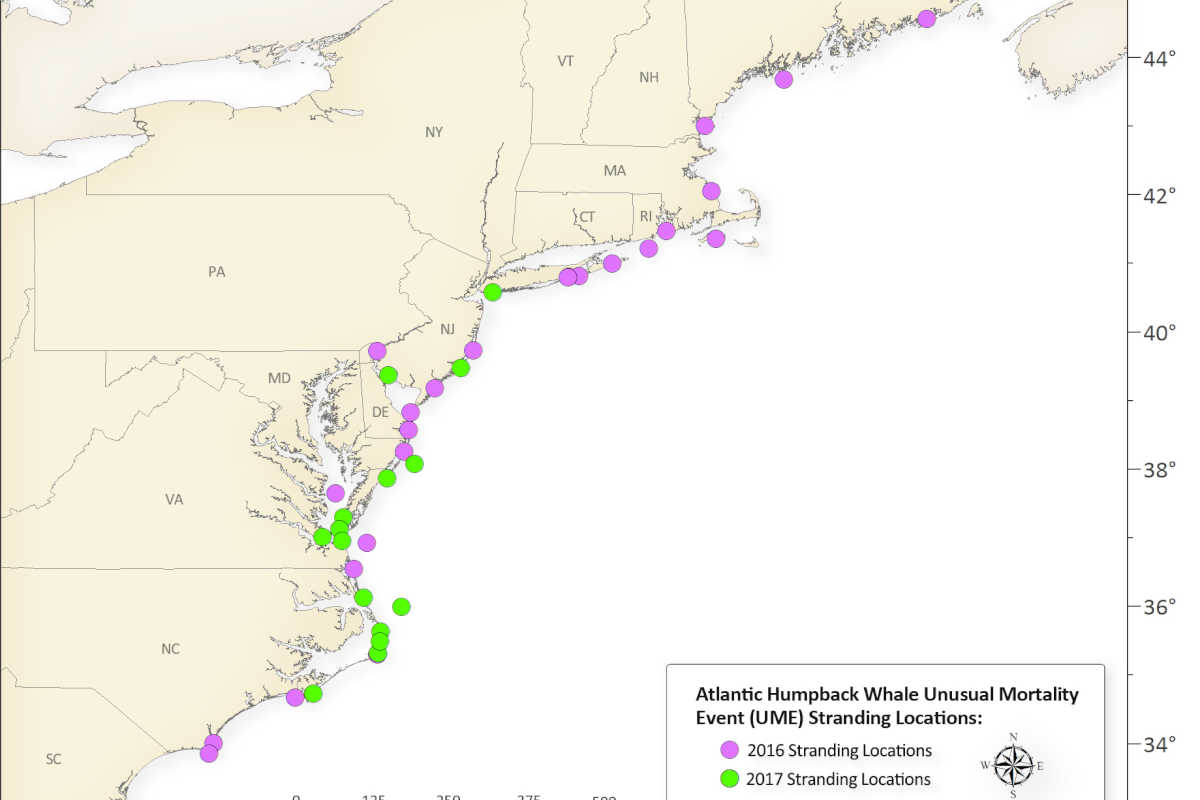 Provided by NOAA
A NOAA map charts where humpback whales have washed ashore in 2016 and 2017.

The latest stranding of a whale carcass April 27 on the U.S. East Coast led the National Oceanic and Atmospheric Administration (NOAA) to declare an "unusual mortality event," prompting a federal investigation into the whale deaths.

NOAA researchers will look at wounds and other obvious physical injuries among the whales, along with water temperatures, diets, and other factors in an attempt to figure out what may be causing the spike. The April declaration is the fourth since 2000 involving humpbacks.  Researchers in those investigations, which occurred between 2000 and 2010, couldn't pinpoint what caused the deaths.

Since January 2016, the 43 humpbacks that have washed up along Atlantic beaches have been scattered over beaches in 10 states.  The average number is around 14  per year in the same region, according to experts.

Only five months into this year, 11 humpback deaths have been reported.

That is considered an "anomaly for this geographic area," according to Mendy Garron, stranding coordinator at NOAA Fisheries Greater Atlantic Region.

Necropsies have been performed on 20 of the animals, and none showed signs of an infectious disease, Garron said. In 10 of the cases, based on cuts and abrasions on the carcasses, it appeared that the whales died from being struck by boats or ships — a number also much higher than the average 1.4 per year. 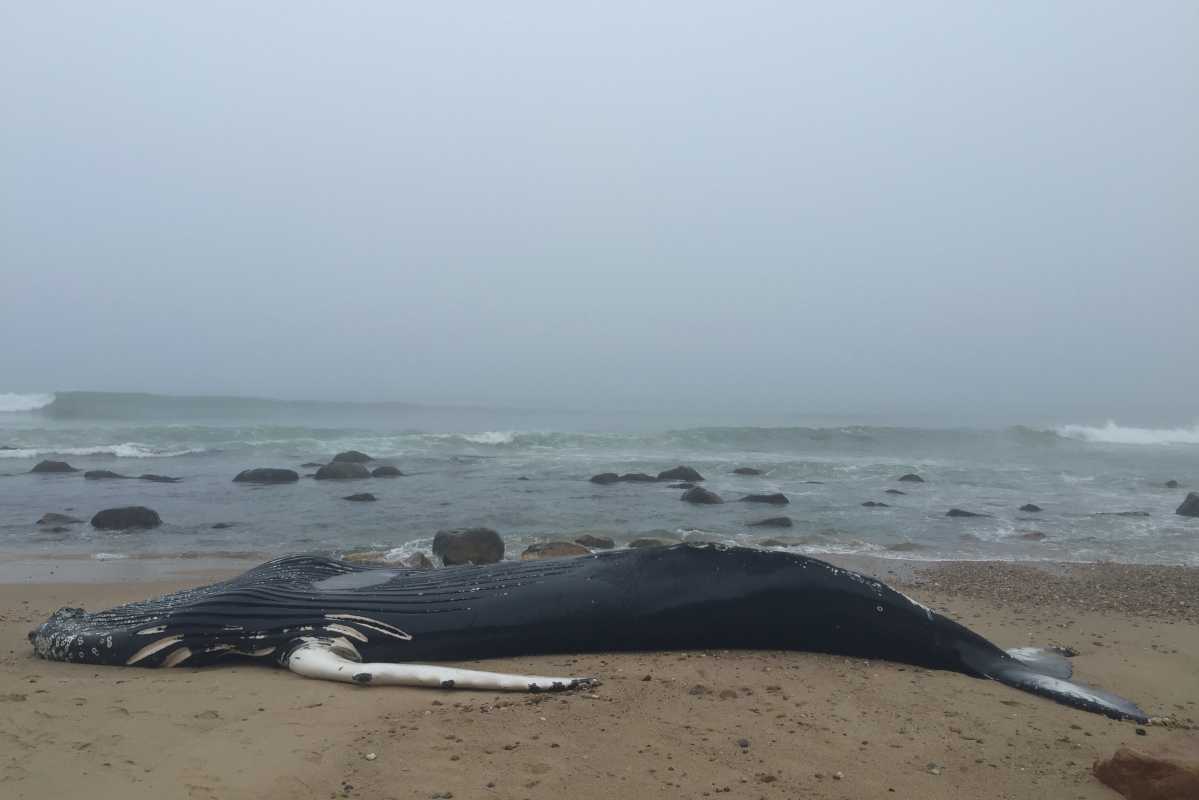 Provided by NOAA
A dead humpback on the beach of Block Island, R.I., in March 2016.

NOAA officials say they have no preliminary theories on the spike and won't speculate on why more whales may be coming into contact with vessels or whether environmental factors such as pollution or long-debated military testing drills conducted off the coast of Virginia could be the cause.

"We're probably going to find there is no spike in vessel traffic in these areas," said Gregory Silber, marine resources manager in NOAA's Office of Protected Resources. "We know that humpbacks go where the prey is, so they ultimately could be going to areas that bring them closer to ships."

Environmentalists, some coastal legislators, and others have long worried about adverse effects not only from man-made interference above the water, but also from what is happening below the surface with military and oil drill testing.

"The ecological damage and negative impact caused by seismic testing is clear, which is why there is near-unanimous opposition from local concerned residents, commercial and recreational fishermen, and environmentalists along the Jersey Shore," LoBiondo said. "This bipartisan legislation reaffirms my strong opposition to seismic airgun testing in water off South Jersey."

Offshore petroleum extraction had been blocked by the Obama administration until 2022, and President Barack Obama placed a hold on all seismic airgun permitting before leaving office. Last week,  the Trump administration ordered a reverse of the drilling ban and will likely allow seismic airgun blasting to resume.

Bob Schoelkopf, founder and executive director of the Marine Mammal Stranding Center in Brigantine, whose agency is called upon to remove stranded marine animals found along the shoreline and perform necropsies, declined to speculate on the cause of the high number of humpback deaths along the coast.

"We need to wait and see what NOAA can tell us about all of this," Schoelkopf said. "But we may never know definitively."