The Pa. Supreme Court's justices have received $183,915 from lawyers or their firms who are involved in the legal fight over the release of the grand jury report on Catholic clergy sex abuse. One justice has said she will consider stepping aside if asked to do so.

HARRISBURG — The law firms and individual lawyers waging a fierce fight over a secret grand jury report detailing sexual abuse by Catholic clergy across the state have together donated more than $180,000 to the campaigns of the Supreme Court justices now weighing whether to release the report, records show.

Justice Debra Todd was the first to publicly disclose her contributions in court. In a filing late Tuesday, she acknowledged more than $23,000 was given to her campaign last year by attorneys, firms, or lawyers tied to them. Todd said she would consider recusing herself from the high-profile case if asked to do so.

Most of her colleagues on the high court have not done the same, despite also having accepted donations from lawyers now arguing before them, according to an analysis of campaign finance records from the Inquirer and Daily News and the Pittsburgh Post-Gazette. (Justice Sallie Updyke Mundy filed a similar disclosure Wednesday, after the newspapers asked about her donations and those to the other justices.)

Legal experts say the justices' actions are not a surprise. They are not required to disclose the donations in court filings, as each is already recorded in campaign records. And if history is a guide, the money they took in is unlikely to prompt any to step aside.

In Pennsylvania, where judges are elected, raising campaign cash from lawyers who might appear before them is an inevitable if at times unsavory part of the process.

"Campaign contributions are simply the cost of running for elective office," said Bruce Ledewitz, a law professor at the Duquesne University School of Law.

Ledewitz said he doesn't believe campaign dollars corrupt judges or taint their ability to make impartial decisions. But, he said, it fuels what has been a long-standing debate in the state about whether judges should be elected or appointed.

The more than 800-page grand jury document was expected to be released late last month by Attorney General Josh Shapiro. But at least two dozen current or former clergy members — whose names are being kept secret — have asked the high court to block Shapiro's office from releasing the report. Among their arguments are claims that they were denied due process during the grand jury's investigation and that their reputations will be unjustly sullied.

At the same time, nine news organizations, including the Inquirer and Daily News and the Post-Gazette, have separately petitioned the court to allow the report's release. A clergy abuse victim has also filed court papers to push for the report to become public.

The donations from lawyers and firms have flowed into the justices' campaigns since 2013. The majority came from attorneys now representing petitioners who seek to block the report's release, although some donations clearly occurred before the investigation started.

The roughly $23,000 Todd took in last year represented less than 4 percent of the $632,000 her campaign collected in contributions. The largest donation Todd received from a lawyer with ties to the case came from William Pietragallo II, a partner with the law firm of Pietragallo, Gordon, Alfano, Bosick & Raspanti LLP, which has offices in both Philadelphia and Pittsburgh. Pietragallo's firm is representing at least five current or former clergy members fighting the report's release.

Pietragallo himself donated $10,000 toward Todd's retention campaign last year. He also served as her campaign committee chair and represented her in a personal matter that she did not detail in her disclosure letter. 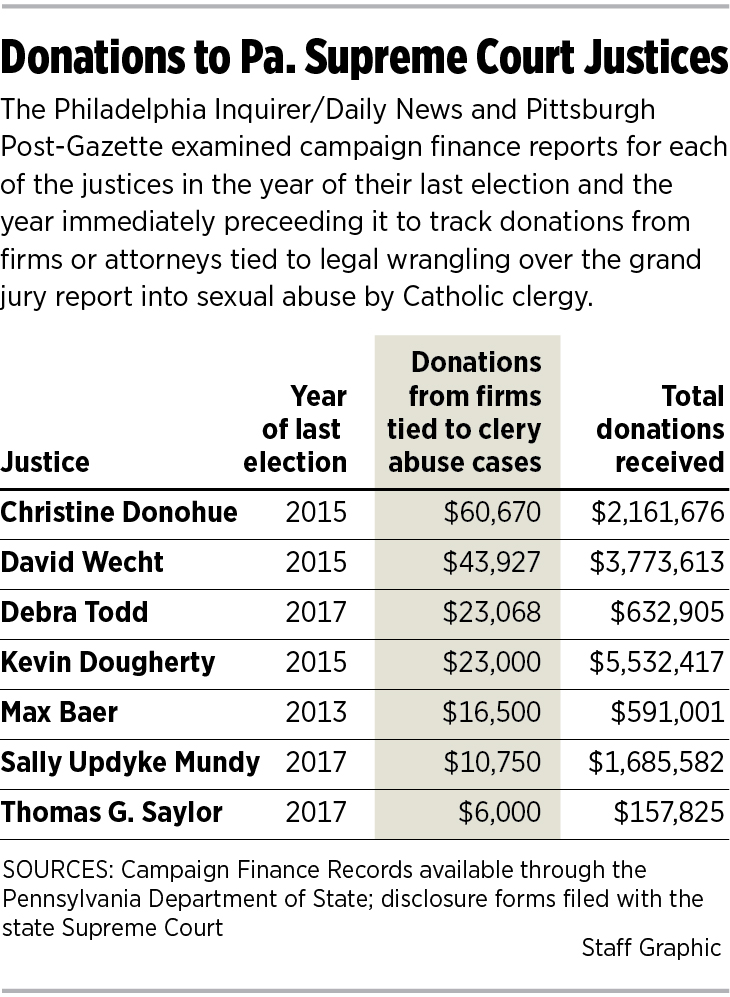 Todd also received money from other firms tied to the case, including a $250 donation from an attorney with Pepper Hamilton LLP, which is representing the nine news organizations in their Supreme Court petition.

In her disclosure filing, Todd wrote that she is confident she can "impartially and objectively participate in the consideration and decision of this case." Nevertheless, she said, she would consider any requests for recusal, setting a Thursday noon deadline for any objections to her involvement.

Pennsylvania's code of judicial conduct says judges should recuse themselves from any proceedings in which their "impartiality might reasonably be questioned." That could include instances where lawyers tied to a case before a judge have made direct or indirect campaign contributions.

In practice, however, campaign donation disclosures are more common than recusals.

Campaign records show that all seven justices have accepted donations, ranging from a low of $35 to a high of $10,000.

In all, the seven brought in at least $183,915 from such groups in the run-ups to their last election or retention campaigns to the court. Though it is a small fraction of their overall donations — which together equaled roughly $15 million — legal experts acknowledge such money can create public perception problems.

Justice Christine Donohue, a Pittsburgh Democrat, received at least $60,670 from the related firms and lawyers during her 2015 election to a 10-year term. Justice David Wecht, an Allegheny County Democrat, took in $43,927 in his 2015 campaign, while Justice Kevin Dougherty, a Democrat from Philadelphia, received at least $23,000 for his bid that year. Justice Max Baer, a Democrat from Allegheny County, collected $16,500 during his retention campaign in 2013.

On the Republican side, Chief Justice Thomas Saylor, from Cumberland County, logged $6,000 in donations last year from lawyers or firms with ties to the case. Mundy, of Tioga County, disclosed $10,750.

The justices did not respond to a request for comment made through a court spokesperson. However, in a memo filed Wednesday by the Supreme Court prothonotary, Wecht described his contributions cited by the newspapers as "de minimis," the Latin term for something that is too trivial or minor to merit consideration. He noted he raised $3.7 million for his election in 2015.

The memo said Wecht also pointed out that he administered the oath of office to Shapiro, who was elected attorney general in 2016 — and that "should any party wish to move for his recusal, on these bases or any others, Justice Wecht will consider and decide any such motion with an open mind."

Across all the justices, the most frequent contributors were people tied to four firms: Pietragallo, Fox Rothschild, Buchanan Ingersoll & Rooney and Kline & Specter. Of those, Kline & Specter is the only one representing a victim. Calls or emails to the firms were not returned.

Pennsylvania's system of electing rather than appointing judges has long been a target of criticism. Judicial reform groups, including Pennsylvanians for Modern Courts, have instead advocated merit selection of judges, contending that system will result in a fairer and more independent judiciary.

Maida Milone, president and CEO of Pennsylvanians for Modern Courts, said she applauded Todd's decision to disclose her donations.

Generally speaking, she said, campaign cash is a key part of why her group has pushed for nearly three decades for a selection process that involves input from a bipartisan citizens group. Such a change in the system requires an amendment to the state constitution, a lengthy process that starts with the legislature and ends with a voter referendum.

"No matter how ethical [judges] are and try to be about their decision-making, there is a public perception that money influences decision making — and that undermines the public's confidence in the judiciary," Milone said.

Angela Couloumbis, Staff Writer
I write about the intersection of money, politics, and policy-making in the Pennsylvania Capitol for Spotlight PA.