You can hear the man from the stairs. He calls out "Xanny! Percs!" as the El above him pulls away. He is thin, wearing a red sweatshirt. A small tattoo is etched above his left cheek. His corner is Somerset and Kensington, in plain view of a SEPTA Transit Police car across the street.

Such is life in Kensington — what pastor Mark "Buddy" Osborn calls "the epicenter of the heroin trade" in Philadelphia.

Osborn stands on the sidewalk in front of Rock Ministries, just 100 or so feet from the drug dealer. His ministry gives free boxing lessons to kids, provided they attend a short Bible study. On some nights, as many as 75 kids come to the Rock to box. An additional 35 do homework in the study space upstairs. His gym isn't so different from any other in the city, Osborn insists. "I just add Scripture to it." 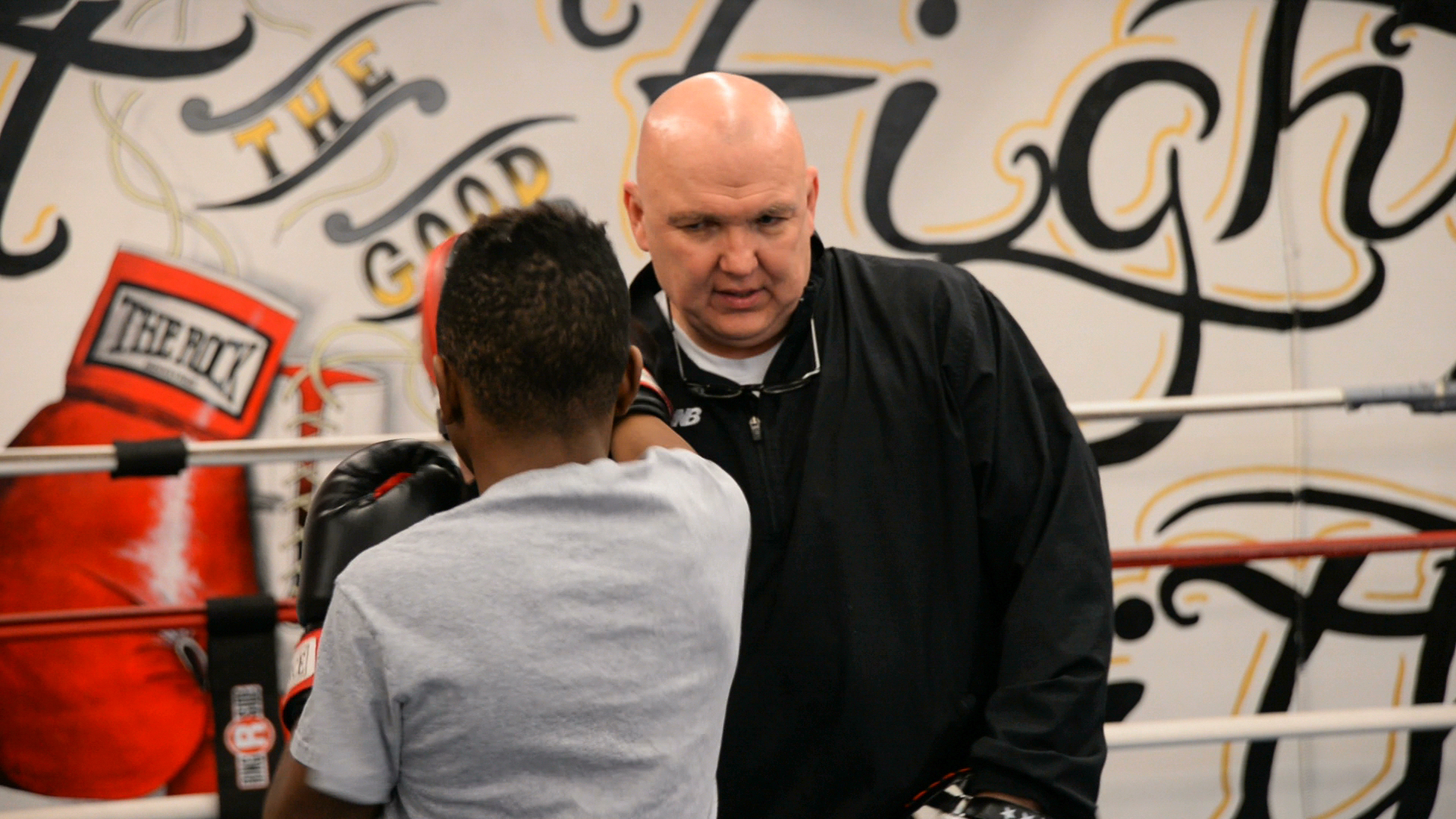 Rock Ministries is plain and peach-colored, standing out amid the row of homes and storefronts on Kensington Avenue, mostly thanks to a single word of multicolored graffiti scrawled on its wall: Jesus.

Step inside and you find the boxing gym. Wood floors, white walls, a blue mat. Punching bags hang from the ceiling. More graffiti art, this time reading, Fight the good fight of faith. No cross in sight. 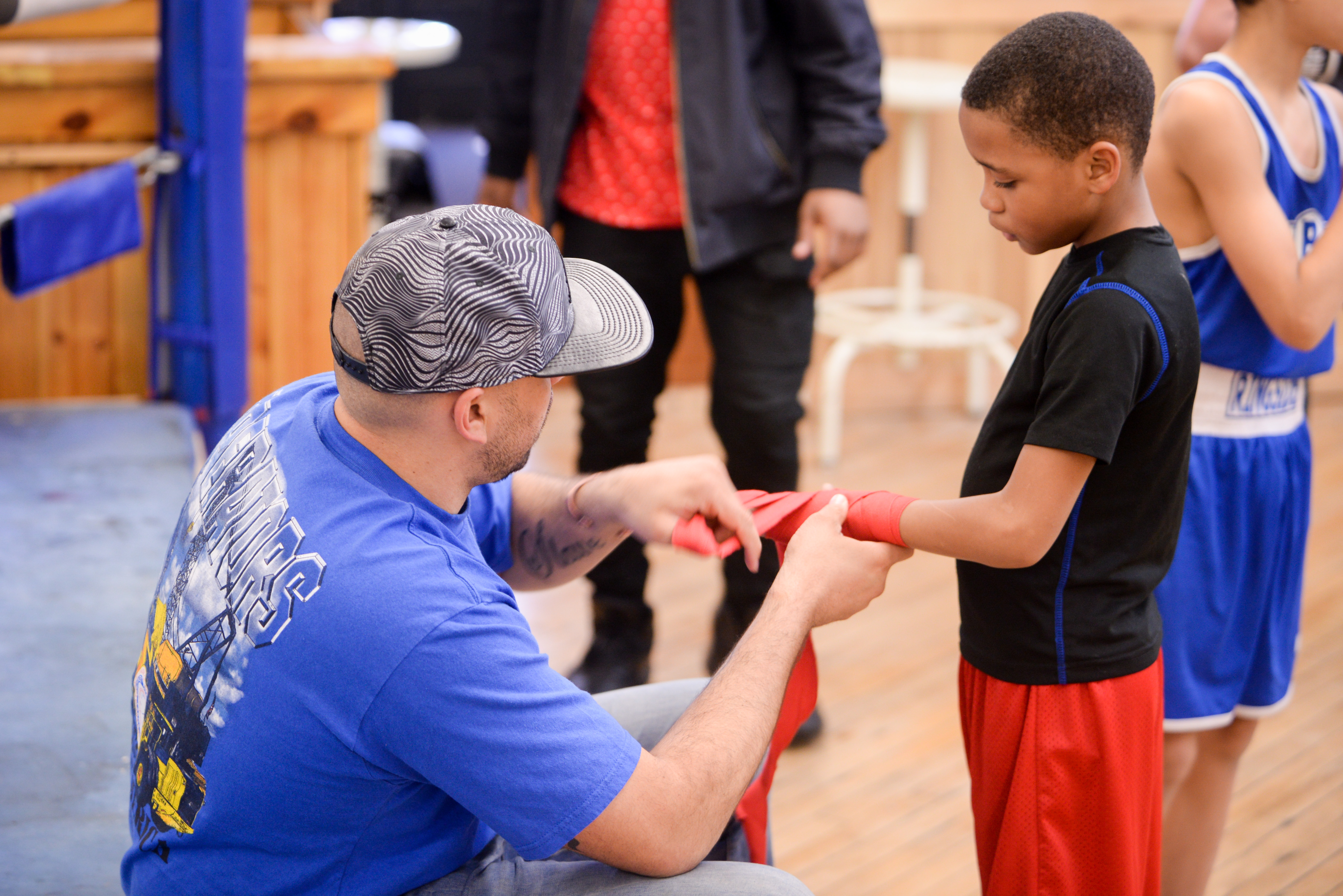 On this Wednesday afternoon, a young boxer jumps rope. Another bangs a speed bag against the wall, sending a rhythmic pattering of triplets throughout the gym. Two fighters occupy the center of the mat, dancing back and forth in their Nikes. Their arms bob in front of their faces, searching for an opening. One seizes his opportunity, unleashing a flurry of punches. Rights and lefts, forcing spit out of his opponent's mouth when he connects. Now his sparring partner is in the corner, bracing himself on the ropes. Then he backs off.

Osborn, on the other side of the ring, turns and quietly quips, "Better than getting shot in the streets."

God along the El

Roughly 35 churches live under the El, from Frankford through West Philadelphia. Some, such as the bright pink Frankford Presbyterian Church, built in 1860, predate the train. Others are newer, housed in converted homes or storefronts, identifiable as churches only thanks to a cross here, a banner there. The Memorial Gospel Crusaders Church, at 63rd and Market, used to be a gun shop. Rock Ministries is the former home of Dennery's Sporting Goods — Osborn himself shopped there as a kid.

Only 10 of the churches are housed in traditional edifices; the rest used to be something else. For these churches, real estate beneath the El is a natural draw.

"This is a place where everyone knows where they are and they're easy to access," said Ram Cnaan, director of the Program for Religion and Social Policy Research at the University of Pennsylvania. "And the cost of getting a place is almost insignificant."

The story of churches beneath the El is equally one of immigration and migration. In a 3½-mile stretch between Kensington and Frankford there are, for instance, five separate Spanish-speaking Pentecostal churches.

"You tend to see places of worship popping up in and around those ethnic, new-arrivals neighborhoods," said R. Scott Hanson, who lectures in history at Penn.

This presents a dilemma for older churches that typically haven't served the new immigrant populations. "Some churches consciously seek to be a multi-ethnic congregation because they know that's the way to survive," Hanson said, "but others in the congregation might grumble."

Frankford Presbyterian has always been a predominately white church. Its membership declined precipitously following World War II, when "white flight began to afflict the neighborhood," according to the current pastor, who wished to remain unnamed for privacy reasons. Today the typical attendance at Sunday service is around 17 people.

The Rock, on the other hand, is growing and multi-ethnic, a one-two punch of fisticuffs and faith. 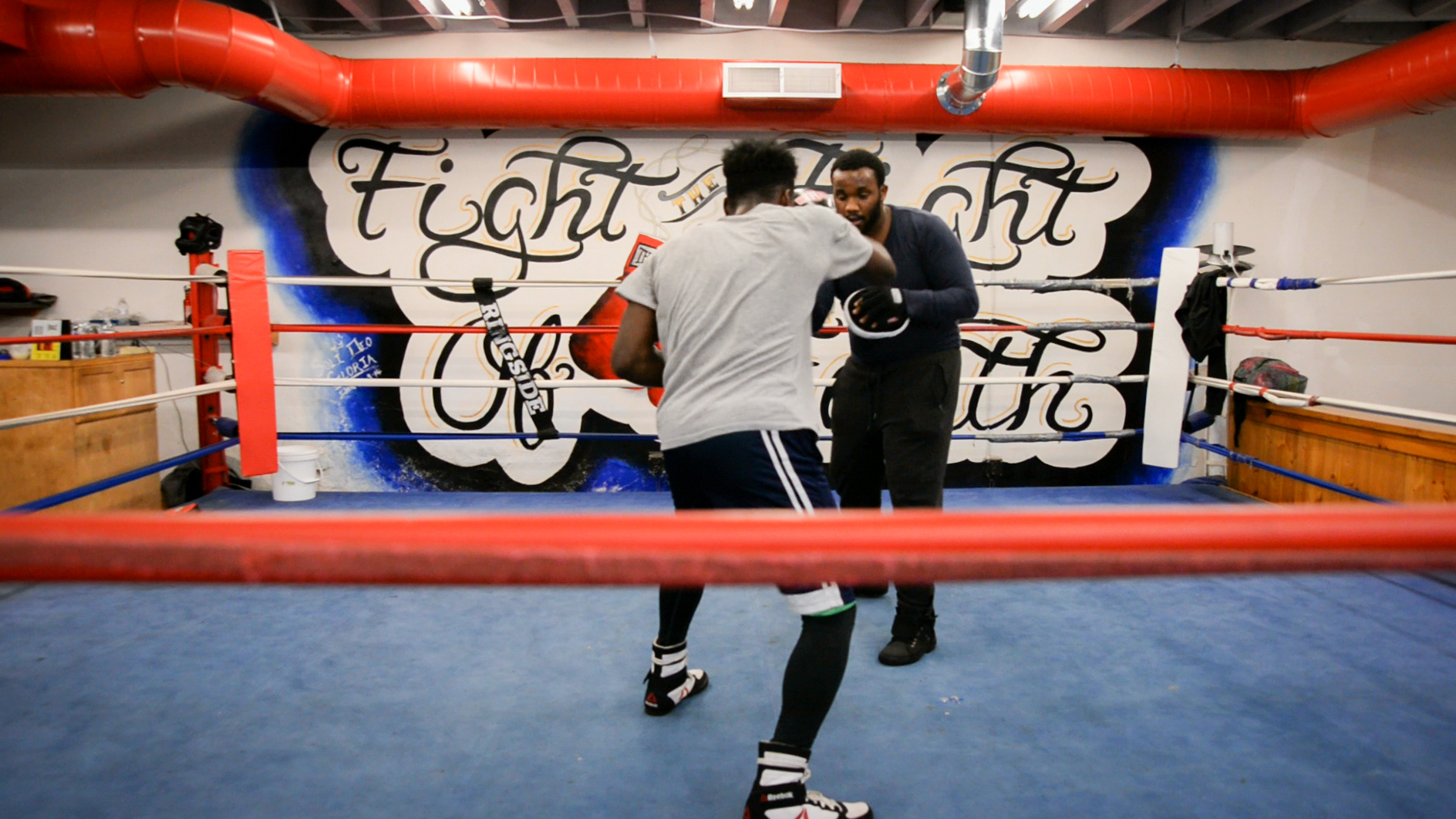 The Story of Saul

The Bible tells the story of a man named Saul. He had been a murderer, had taken Christians away from their homes and imprisoned them, had sought to persecute Jesus himself. Then he heard the voice of Jesus on the road to Damascus.

"Saul, Saul, why do you persecute me?" Jesus asked.

"Who are you, Lord?" Saul replied.

"I am Jesus, whom you are persecuting."

Saul fell to the floor, blinded. He neither ate nor drank for three days. He later became known as the Apostle Paul.

"This guy was a terrorist," Osborn explained. "He was a guy who was hell-bent on killing Christians." And yet there he was in front of Jesus, repenting, converting.

Osborn sees some of himself in Saul.

The Kensington native had been a prize-winning boxer, a winner of the Pennsylvania Golden Gloves. One day when he was 27 and working for the Roofers Union as an enforcer, he beat up a man. The FBI happened to be listening on a wire. He spent 28 months in house arrest and was eventually convicted on RICO charges. He served five years in federal prison.

Behind bars, Osborn received a letter from a neighborhood woman who told him, "Jesus has you in the palm of his hand." At the time, Osborn had no idea what she meant. But in 1995, three years after being released from prison, Osborn said, he "gave my life to Christ."

He began teaching boxing — the "great inner-city urban sport" — the following year. The idea for a sports ministry dawned on him after he began preaching at the juvenile prison block of Philadelphia, which he visited weekly.

Once, he asked if any of the 28 kids to whom he was preaching had been told about Jesus by their mothers. A few hands went up.

"How about your grandmother?" Osborn asked. A few more hands.

"How about your father?" 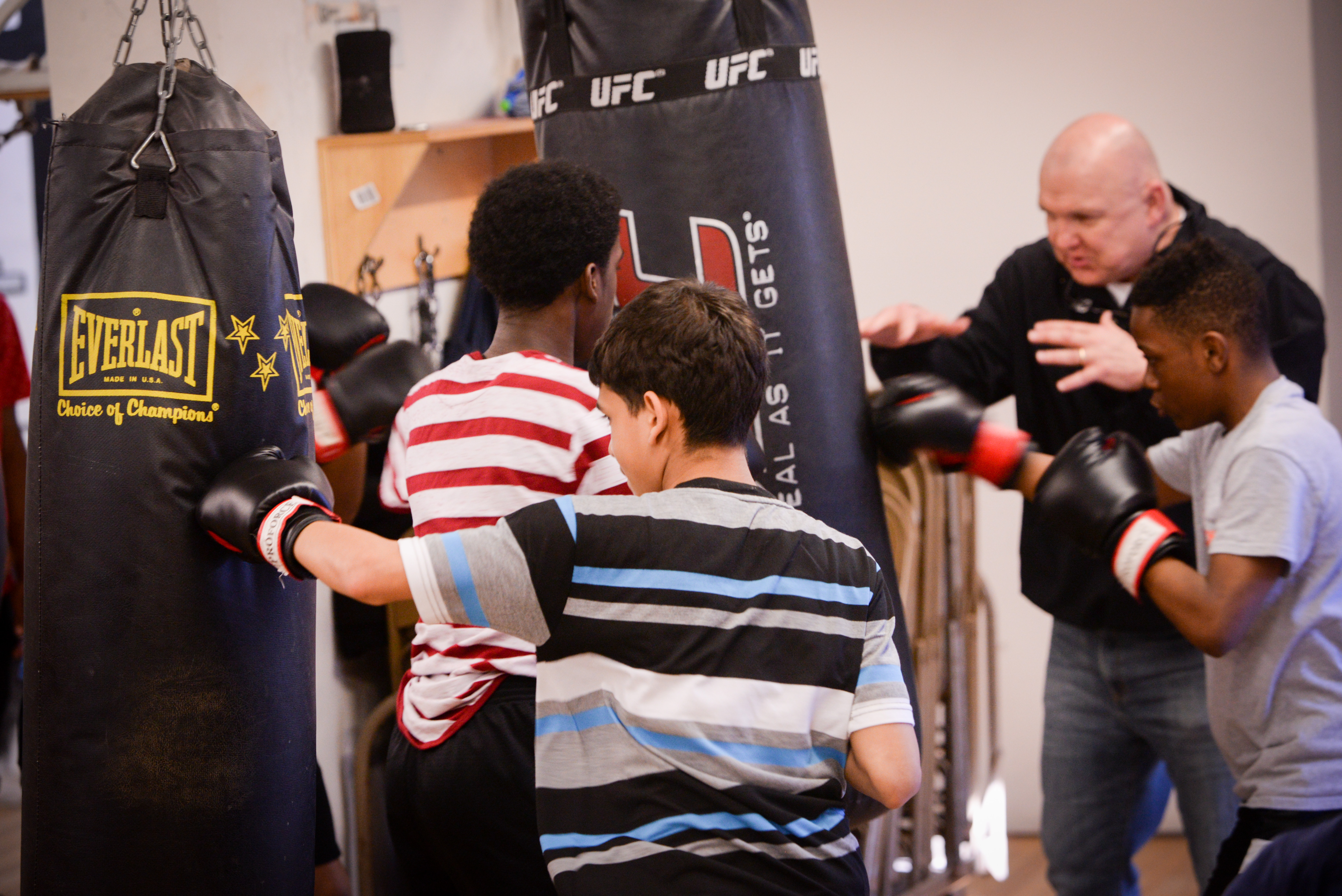 When he bought the building in 2003 for $95,000, putting up his home as collateral, it was a hollowed-out skeleton of a building without heat or electricity. Rats and addicts were its only occupants.

"I was embarrassed to show people," Osborn said. To this day, there are still bullet holes in the walls. Osborn doesn't plan to remove them.

When 15-year-old Johnny Rivera first came to the Rock in 2003, he was still in the drug game. He always carried a gun. He'd been 13 when he first sold drugs — ecstasy and marijuana. He grew up parentless, his father in prison, his mother "lost" in the streets.  At 16 he rented a house when he could, spending nights in cars or at his friends' homes, sometimes sleeping on the street.

"I came in to box and fight for free, because I loved to street fight anyway," Rivera said. He still had to attend the mandatory 15-minute Bible study, which he didn't take seriously at first. "Slowly but surely," he said, "the word of the Lord crept up on me." Today he has a full-time job as a union organizer and has been married for 11 years. He volunteers his own time teaching boxing at the Rock.

Or maybe the Saul figure is Nick Antonino. A recovering alcoholic, Antonino watched his first marriage crumble due to his addiction. "I've got two older sons," he said. "They just watched their father get drunk for 25 years."

Antonino's been sober for the past 14 years, and has a new wife and daughter. After 30 years in Florida, he and his family moved to Kensington to do missionary work at the Rock. "I know the end game," he said. "I lived it. The drug dealers out here are merciless."

A few weeks ago, he saw an 8-year-old kid walking the street, slanging. "How old are you? Ten?" Antonino asked. "Get yourself down to the Rock and stop selling drugs." A gang of teenagers was hanging behind him and laughed. "That ain't gonna work, Papi," they said. "We got him." 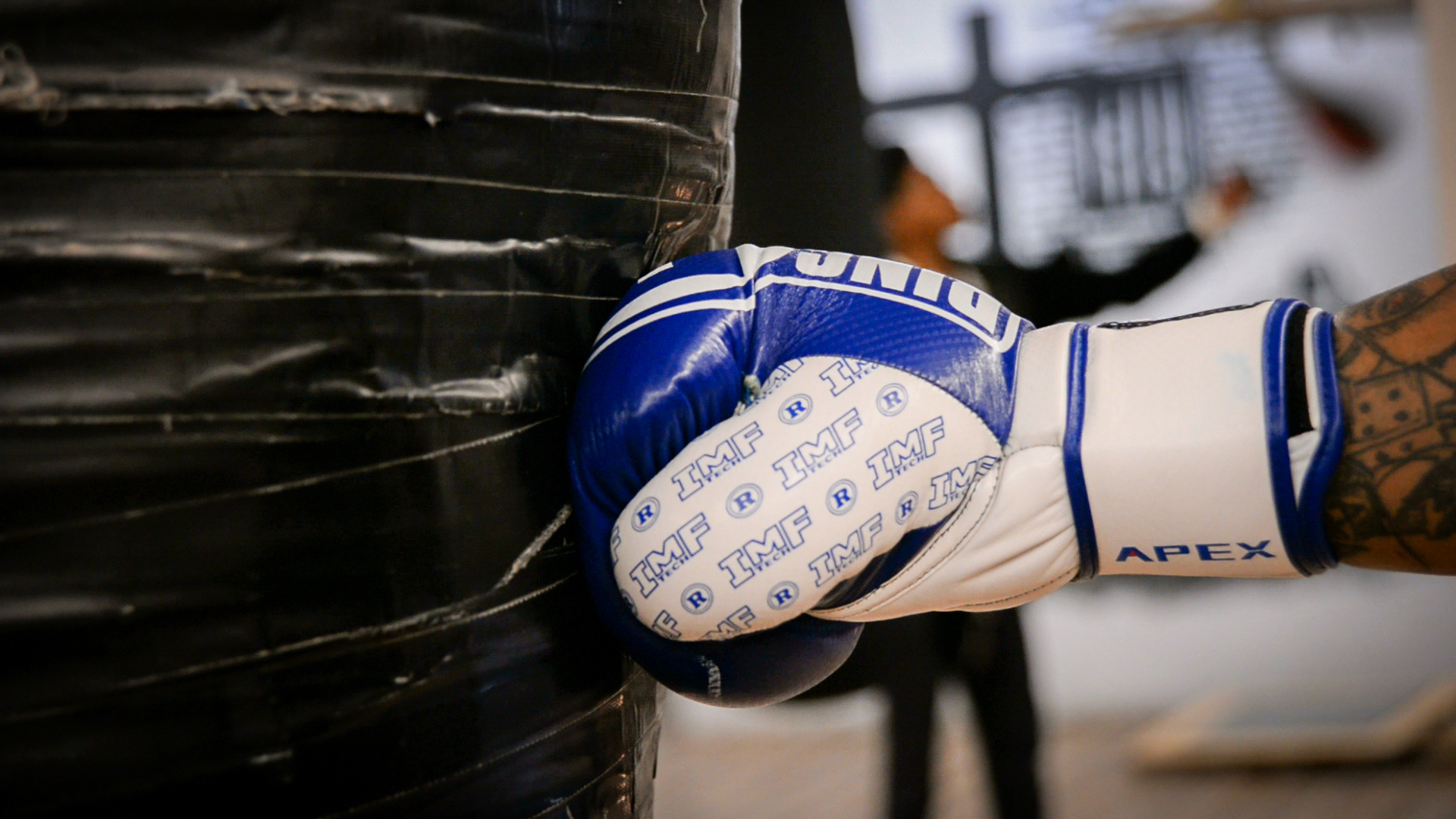 Jared whalen / Staff
The Rock boxing program is registered with USA Boxing, the organization that regulates amateur and Olympic boxing, and provides opportunities for competition in regional and even national amateur tournaments.

On a recent Friday afternoon, Osborn stood outside as a truck delivered a weekly shipment of food — boxes of San Pellegrino soda, instant noodles — to be consumed by the children, adults, and homeless people who visit the ministry. Teams of two pushed the goods, stacked on wobbly crates, from beneath the shadow of the El into the ministry.

"Everyone coming together — black, white, Hispanic," Osborn said, "under the El."

Since 2003, Rock Ministries has grown to include 12 buildings, including a women's crisis center, missionary homes, and shelters for young men. In the coming months, Osborn plans to build on the vacant lot next door to the main building on Kensington Ave, which would be the first new building project beneath this stretch of the El tracks in years.

"A building is just a building," Osborn was quick to caution. A church, on the other hand, is the people. "They're the building I want to see revitalized," he said.

Osborn sees all of the buildings sprouting out of the ground around him. New developers hoping to get their hands on a lucrative piece of "North Kensington," "South Kensington" — arbitrary divisions that didn't exist when Osborn was growing up in the neighborhood. They haven't made it yet to the intersection of Somerset Street and Kensington Avenue. Osborn hopes they never do.

They can have the rest of the city.

"My city is right here in Kensington."