The statue is looking toward a park also named after the city's founder.

by Joseph A. Gambardello
Published

The statue of William Penn atop Philadelphia's City Hall is one of 250 sculptures — and the biggest — created by Alexander Milne Calder to adorn the French Empire-style building inside and out.

Cast at the Tacony Iron Works, the hollow, 26.5 ton bronze sculpture, assembled from 13 parts, is also reputed to be the tallest to stand atop any building in the world.

So how did it end up facing to the northeast when it was placed on its perch in 1894? A question submitted via Curious Philly, a forum where readers can tell our journalists what they're wondering about their communities, asked where Penn was looking and why.

One answer can be found in the Nov. 29, 1894, edition of the Philadelphia Inquirer, in a story reporting on the installation of its head by workers who each received "$10 in gold" upon completion of the work 547 feet above ground.

>> MORE CURIOUS PHILLY: Why Philadelphia's Suburban Station is in the heart of the city

"The figure is so placed," the story noted in its last paragraph, "that the eyes are gazing toward Treaty Park, the scene of Penn's memorable meeting and negotiation with the red men of the forest, and the spot where were laid the foundations of the longest peace ever kept between the native American and the European settlers."

The decision to face it that direction — to the northeast — was made by the Public Buildings Commission, which held the north side of City Hall, where the clock tower with the statue atop it is located, was the "principal front" of the building.

Calder, backed by the Inquirer editorial board, disagreed strenuously and pushed to have the statue turned around to face south so it could be better seen.

But as history has shown, that never happened and Penn continues to gaze toward Treaty Park. 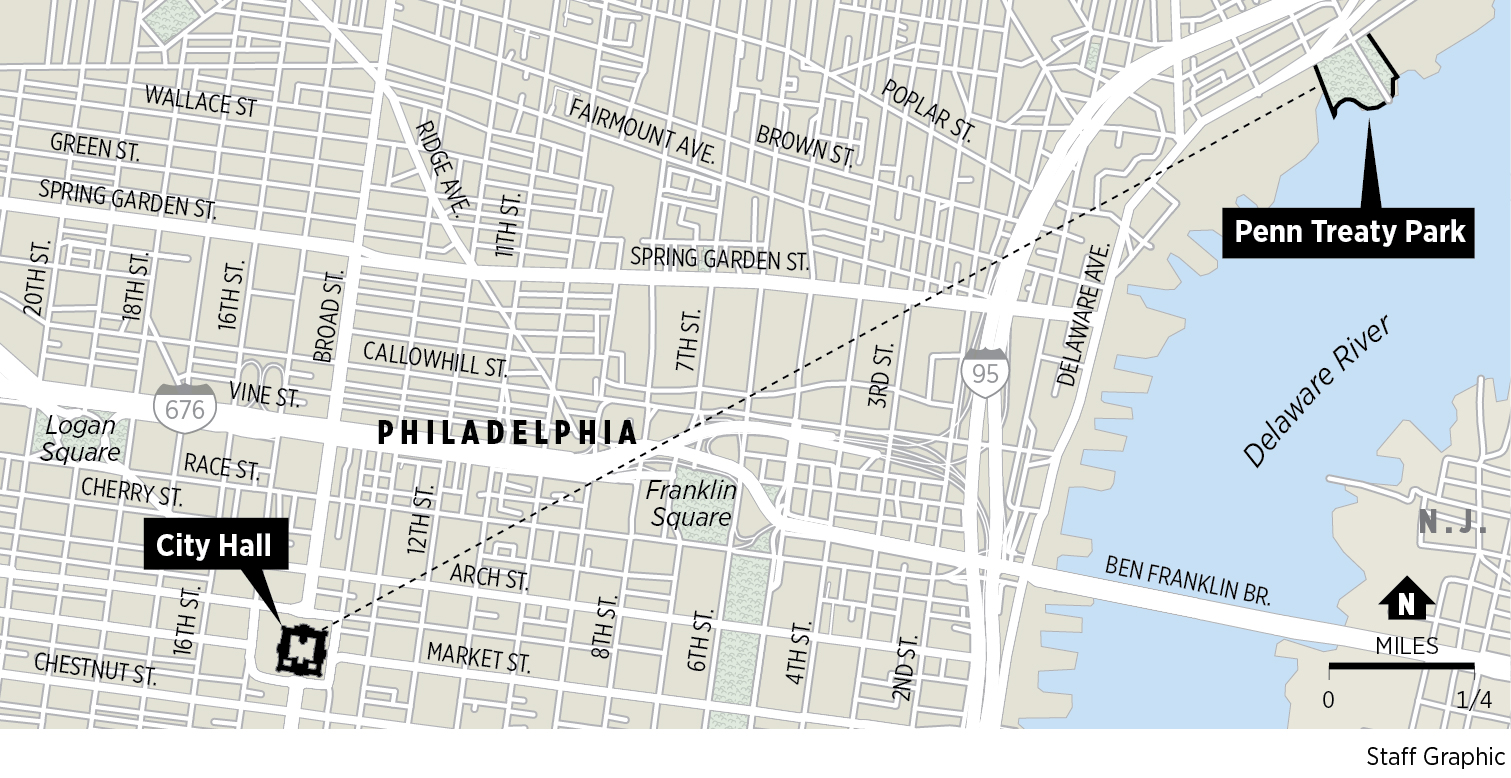 Penn Treaty Park, as it is now called, is on the Delaware River, pocketed by the Sugarhouse Casino to the south, an abandoned power plant to the north, and Delaware Avenue to the west in Fishtown.

It is believed to have been the location of the Lenape village of Shackamaxon, where Penn famously entered into a peace agreement with Tamanend, a chief of the Lenape Turtle Clan in 1683 under what became known as the treaty elm.

It, too, has a statue of Penn — made of stone. A statue of Tamanend also exists at Front and Market Streets; it is positioned to face Penn atop City Hall.

The elm fell in 1810 in a storm and 17 years later the Penn Society erected an obelisk in its place. But cuttings taken from the tree had produced offspring over the years. In 2010, Haverford College Arboretum donated a descendant that was replanted in the park.

Back to the statue atop City Hall. As has often been told, tradition long prevented any building taller than Penn's hat from being erected.

After that unspoken agreement was broken in 1987 with One Liberty Place, Philadelphia found itself suffering a sports-championship drought that was attributed to the Curse of Billy Penn.

In 2007, when the Comcast tower became the tallest building in the city, a statue of Penn similar to the one on City Hall was welded to the top beam. The championship drought ended the next year, when the Phillies won the World Series.

Comcast's second tower is now the city's tallest building, and that, too, has a Penn statue at the top.