Winners and losers from the Alabama special election

After what seems like years, the Alabama special election is over. The race to replace Attorney General Jeff Sessions in the Senate featured votes spanning nearly four full months, featured one bizarre turn after another, and ended Tuesday night with Democrat Doug Jones pulling off the upset over Roy Moore, who faced allegations that he sexual assaulted teenage girls while he was in his 30s.

Let's break down the whole thing via winners and losers.

Democrats' Senate majority hopes: At the state of the cycle, the math for Democrats winning the Senate majority in 2018 – even in a very good environment – appeared prohibitive. They only had two bona fide pickup opportunities, they needed three pickups, and they had to defend 10 swing and red states that Donald Trump won. The map was just brutal.

But since then, they've gotten the news they need to at least put the Senate in-play. Potential takeovers in Arizona and Nevada look increasingly promising. An open seat popped up in Tennessee where they last week landed popular former governor Phil Bredesen as a candidate, and now they nabbed 1 of the 3 pickups they needed a year early in Alabama. The math is still tough, but it's clearly within the realm of possibility now. And with Democrats claiming a double-digit lead on the generic ballot, things are looking up.

The #MeToo movement: As I argued earlier Tuesday, I don't think the results in Alabama say much about how voters would treat similar allegations in any other state. Alabama is just that uniquely polarized and ruby-red. And the fact that Moore still had a fighting chance – and that so many Alabama Republicans clearly believed him when he said his female accusers were making it up — showed the downside of going public with these things.

But Jones' win has to be a shot in the arm for the #MeToo movement. A year after sexual harassment accusations failed to bring down Trump, they were able to bring down a Republican in a dark-red state. Moore certainly had other problems, but this has to embolden other women who might be considering sharing their own stories. At the very least, it shows they can have real, palpable impact.

Democrats' pulse in the Deep South: To be clear: This is a stunning result — no matter what preceded it. Before Tuesday, a Democrat had not won a U.S. Senate seat in Alabama in more than three decades. The party is practically extinct in the Deep South and have been for a few years now, with their gains there gradually rolling back during the Obama presidency. Racial polarization has made the region practically impenetrable for the blue team, which basically holds majority-black congressional districts and nothing else.

I wouldn't say this ushers in a Democratic revival, by any means – absent the allegations against Moore, Jones very likely would have lost – but the fact that Democrats could even capitalize on the right opportunity in a tough region has to warm the hearts of party officials and supporters.

African-American turnout: Perhaps the biggest storyline heading into special election day was whether black voters would turn out to vote enough for Jones. Given how racially polarized Alabama is, Jones could only count on so many votes from white Alabamians, who usually got about 4-to-1 or more for the GOP. And the home-stretch of Jones' campaign featured names like Sen. Cory Booker (D., N.J) and Charles Barkley, along with robocalls from former President Barack Obama. 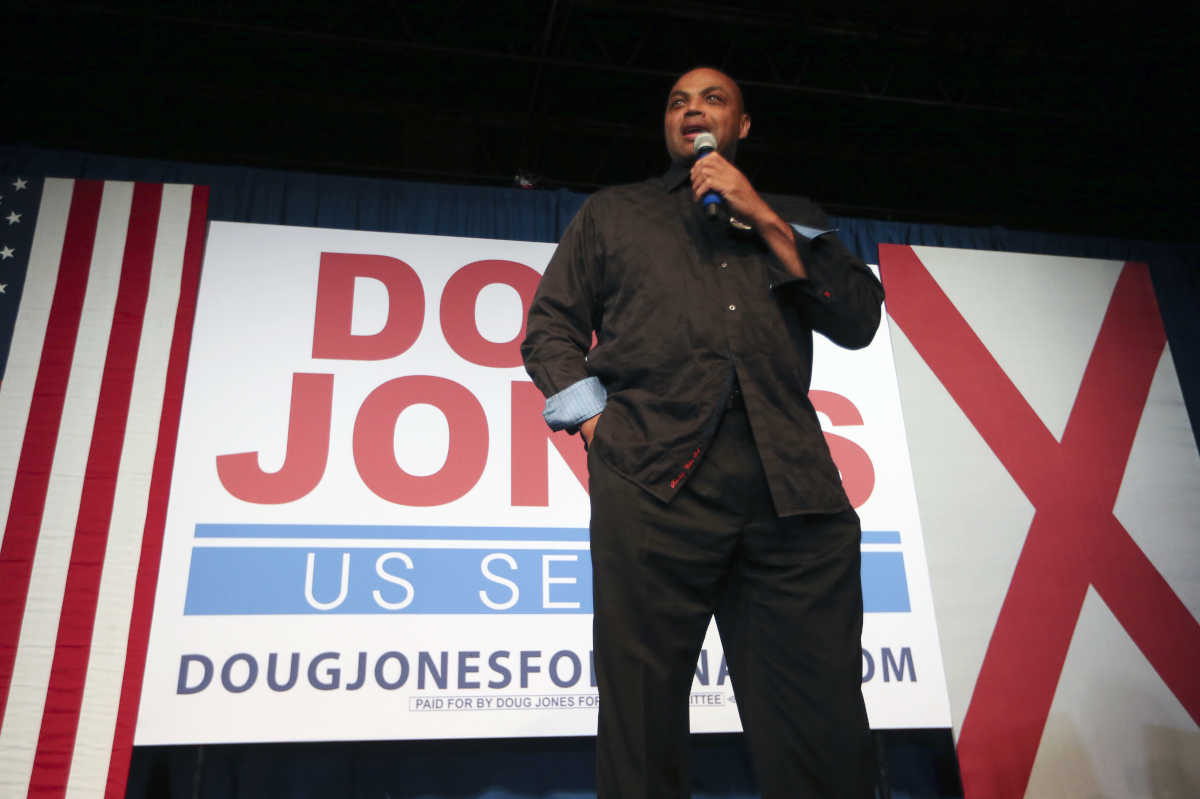 John bazemorE / AP
Charles Barkley speaking at a Monday rally for Doug Jones in Birmingham, Ala.

Well, black voters turned out — in about the same numbers they did for Obama in 2008 and 2012, in fact. Exit polls show 28 percent of the electorate was back, which is slightly higher than the state's black population (27 percent) and especially good considering Obama wasn't on the ballot. The big question is whether this was because conservative-leaning white voters were turned off by the allegations against Moore and stayed home, or because efforts to turn out black voters were just that successful. Even if it was a mix though, black voters gave Jones a shot.

President Trump: Trump stuck his neck out by backing Moore even when other members of the GOP establishment wouldn't, apparently believing Moore had regained momentum and perhaps wary of losing another vote in a closely divided Senate. Whatever the case, it backfired – and in an extremely pro-Trump state, no less.

Dating back to the October primary runoff in which he backed Luther Strange over Moore, Trump has now supported the loser in three straight statewide contests in three consecutive months (the third being Ed Gillespie's Virginia governor campaign in November). Trump loves to point out how well Republicans have done in House special elections, which all happen to have been in conservative districts by the way. By that same logic, he's now on quite the losing streak.

Senate Republicans: As the Post's Paul Kane astutely pointed out Tuesday morning, either result Tuesday was difficult to call a victory for Senate Republicans. Losing the seat would mean their Senate majority was narrowed by half and more imperiled come 2018, but winning it would mean they have to deal with Moore. And even before all the sexual allegations, that was something Senate Republicans really preferred wouldn't be the case, given Moore's uniquely extreme politics and penchant for fashioning himself a martyr. Layer on top of that the fact that Republicans said they'd call for an ethics investigation and even, in some cases, Moore's expulsion, and Moore being in the Senate might be a bigger headache than a Democrat.

In the end, Republicans got Option A.

Mitch McConnell: This may seem redundant given the above, but there was nobody who took a beating worse in the entire Alabama campaign than the Senate majority leader. Moore decided to make him the bogeyman from the very start, sending hyperbolic emails warning that McConnell was trying to stop him. And when the allegations came to light, McConnell clearly did try to stop Moore, urging him to step aside in favor of a GOP write-in candidate.

Well, none of it worked. And not only did McConnell fail to nudge Moore aside, but by the end of the race, exit polls showed just 16 percent of Alabama voters had a favorable opinion of the GOP leader, versus 67 percent unfavorable — in a red state. Expect plenty of insurgent GOP primary challengers to use this exact same playbook next year. It sure seemed to pay dividends here.

Roy Moore's surrogates: They took to the media to defend Moore when nobody else would, and they repeatedly showed exactly why nobody else would. They compared Moore's alleged relationships with teenagers to Mary and Joseph in the Bible. They compared unwanted sexual touching of a 14-year old to stealing a lawnmower. They awkwardly cited a TV host's "diverse background" — apparently a reference to arranged marriages in India (despite the host never having lived there). And even on special election day, they took to the cable news airwaves to suggest public officials were required to swear oaths of office on the Bible (they're not).

It was a painful, and now thankfully it's over.